It’s a good thing it’s time for Rachel and Gabby’s Men Tell All episode because I don’t remember who any of these dudes are and BIP starts in a few weeks.

At this point, I’ve given up on receiving a coherent love story arc for either Rachel or Gabby so Paradise is all I have. Let a girl live.

But first, let’s get witchy

Of course, before we could get to the Men Tell All, Rachel needed to have her last Hometown Date with Aven in Salem, Massachusetts. 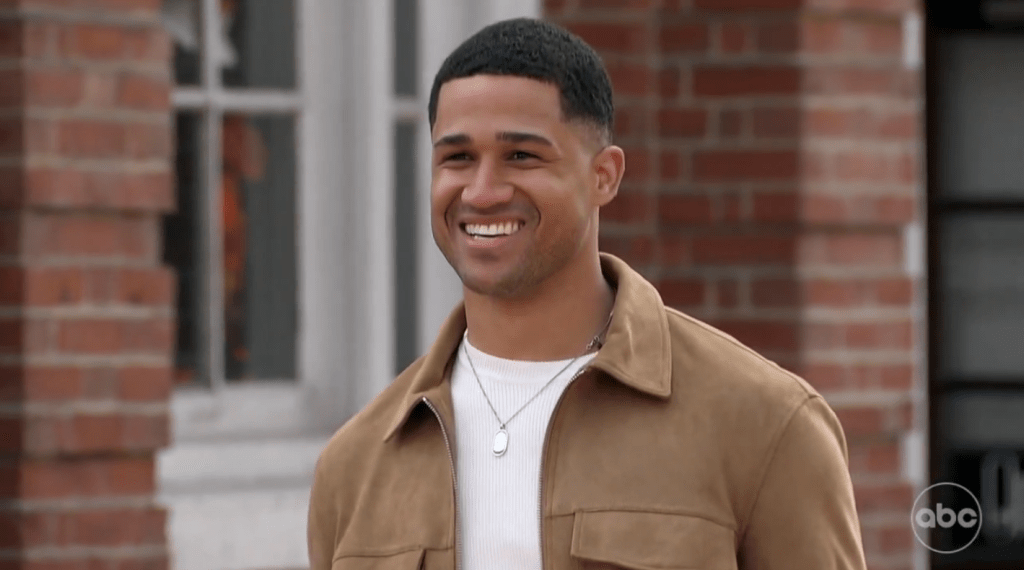 In the past, hometown dates have been about allowing the lead to experience what a normal day in the life of each man would be like. But this is upside down Bachelor world where we have two women who are supposed to be engaged in two weeks to men we barely recognize.

So Aven took her to a witch store. 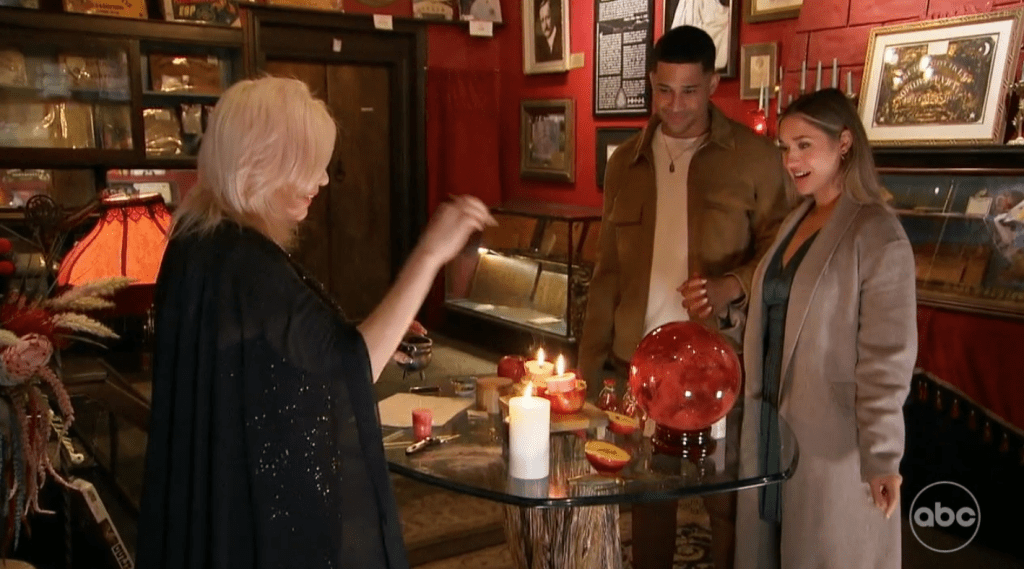 The good news is that Lorelei the love witch of Salem had a Boston accent that would make Chris Evans homesick.

The bad news is that Lorelei the love witch knocked over the table that held their love spell. As in the entire table fell over including an open flame while Lorelei gaped in shock and Rachel asked if it was a bad sign. 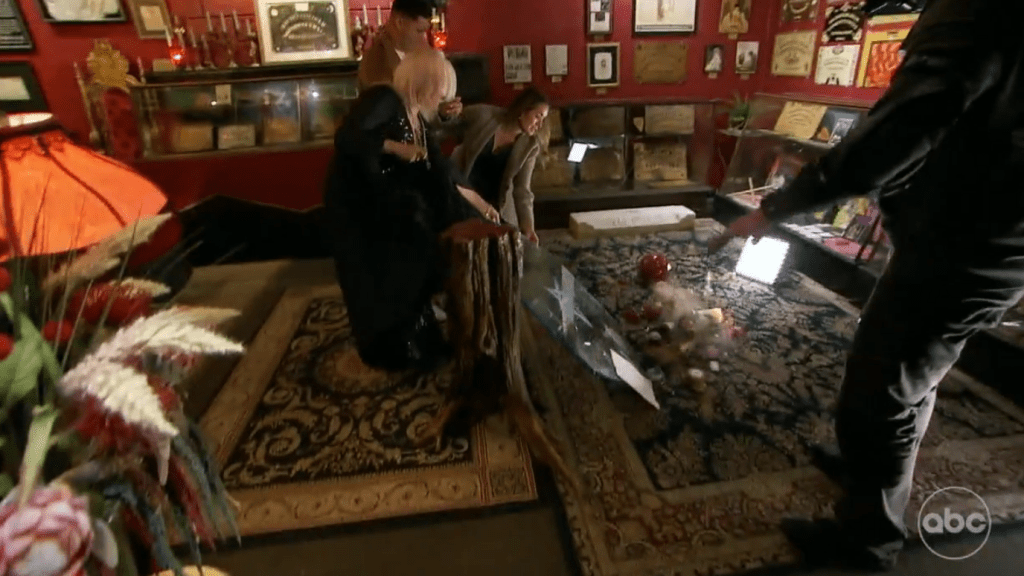 I’m going to go ahead and say yes.

The rest of Aven’s hometown date followed the usual pattern. His parents had some tough questions for them, but in the end, gave them their support.

Their date ended with Aven telling Rachel that he is in love with her and she got a huge smile on her face.

Time for the Rose Ceremony, right? 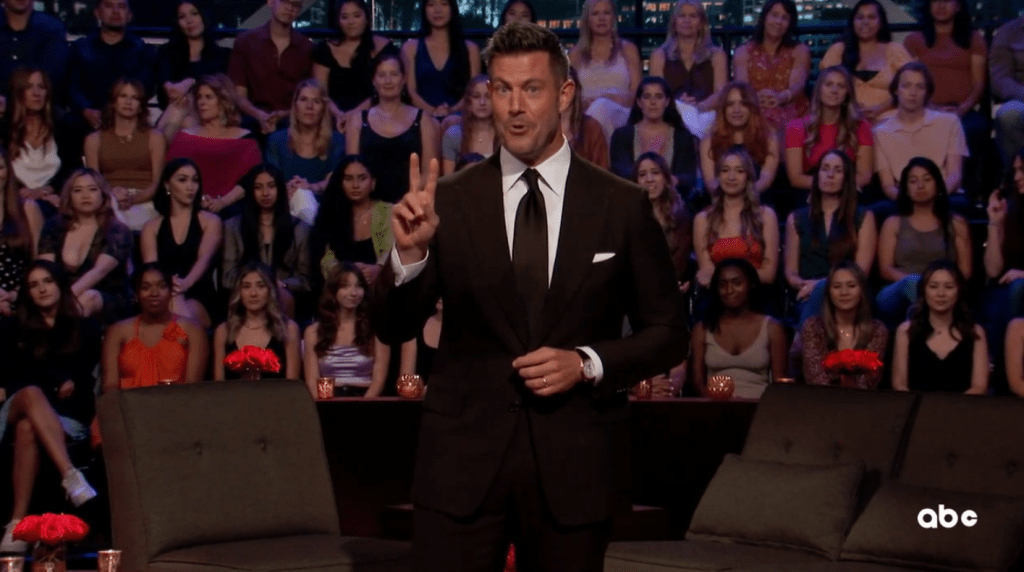 One second Aven was kissing Rachel post-confession of love. The next, Jesse Palmer was all, “I bet you are wondering who is getting the date roses, huh? Oh well, we aren’t going to show you.”

Apparently, all of the men (Aven, Zach, Tino, Johnny, Jason, and Erich) got roses but if we want to see the footage we have to go to ABC.com.

Cool, cool, I hate everything about this. 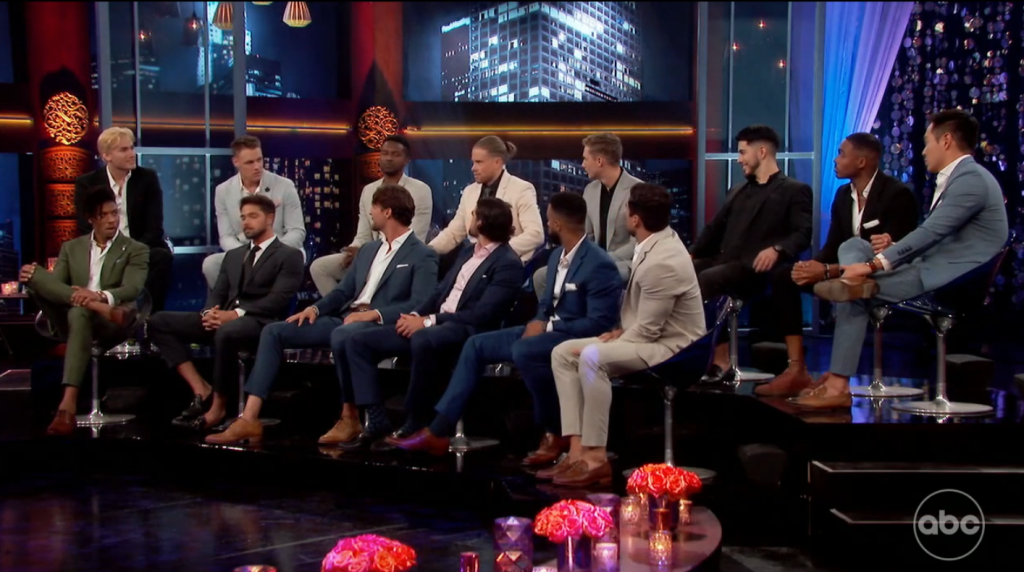 Here’s the thing, this season has been boring AF. I do not care to relive any single second of it. I do not care about these men (until they show up on the beach in Paradise, then I’ll be back in again). So the Men Tell All was…fine?

Like, Roby the magician who got kicked off night one bleached his hair and called Meatball out for not having balls which is never not going to be funny to me. 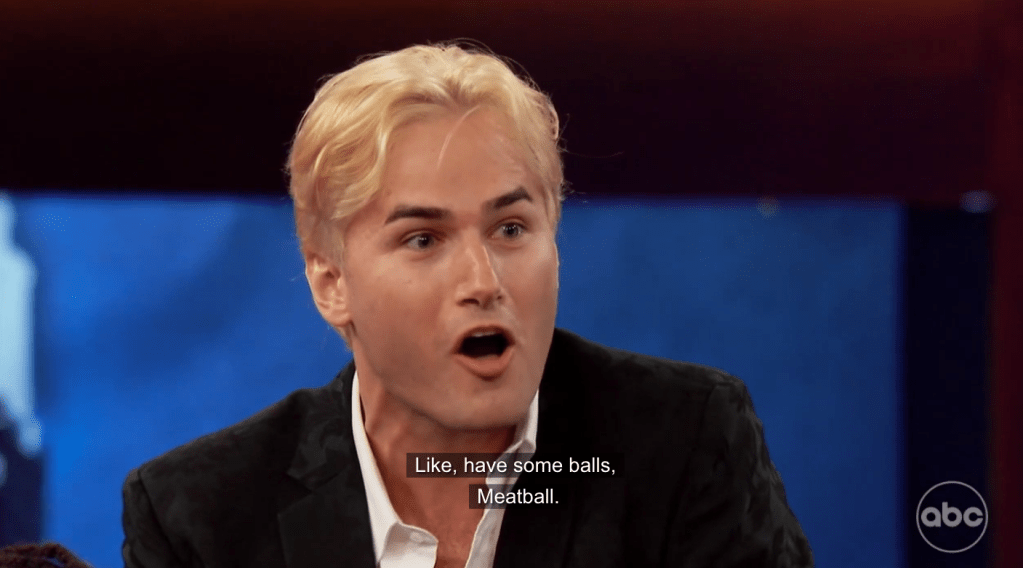 But then again, Hayden, the man who called the women bitches and compared their body parts to his ex didn’t even bother to show up for his round of public humiliation.

Honestly, the only thing good about the Men Tell All at that point in the episode was Jesse Palmer. The man thrives in front of a live audience.

Did I say hot seat? More like lukewarm seat. 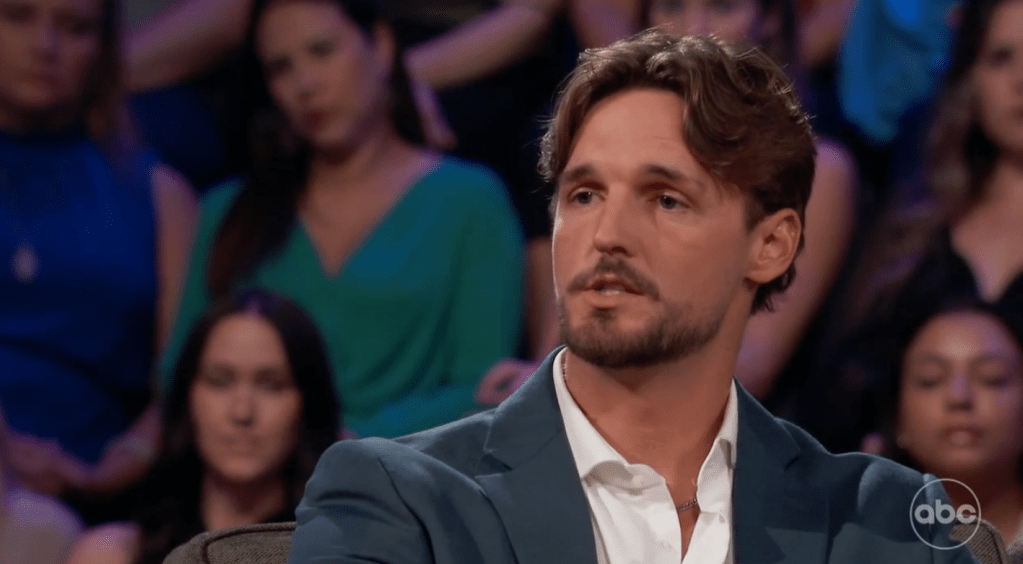 Logan got the off-brand villain edit this season when he couldn’t decide which of the two women he was attracted to. Probably because he wasn’t attracted to either of them, but I digress.

Anyway, right before hometowns, he switched from Rachel’s group to Gabby’s group, and then he left the season with a mysterious case of covid that no one else contracted.

Someone call Scooby and the Gang.

Logan looked broken in the lukewarm seat, but I have a feeling that’s because of something that happens in Paradise because they announced that he is on the cast.

Waste of our time, moving on.

Nate gets the good edit

Next up in the slightly warmer seat was Nate who cried after watching his scenes from the season. 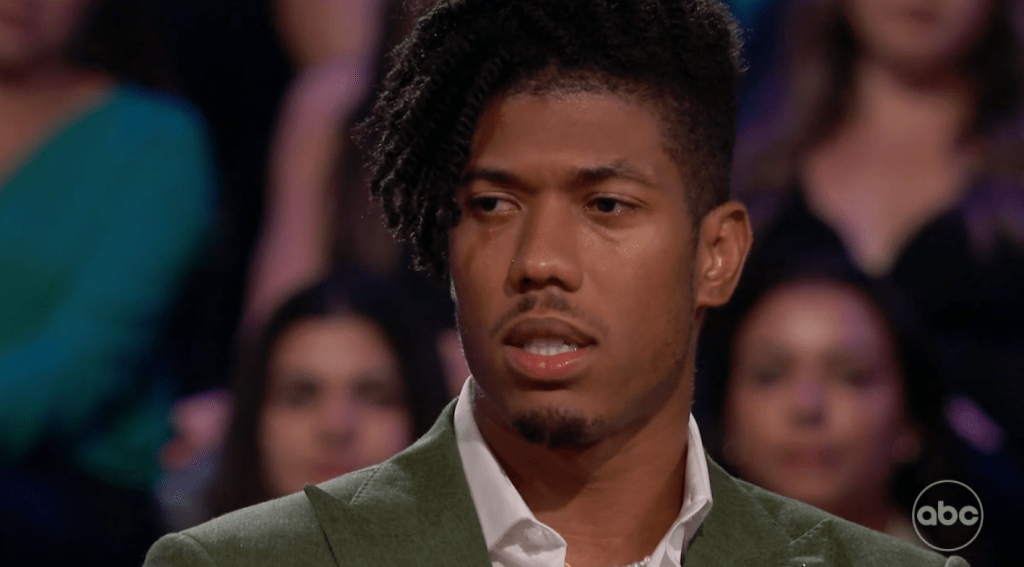 The hot goss from his time in the seat was that Jesse asked him directly about some off-camera drama that Bachelor nation has been talking about on social.

Basically, Nate had a girlfriend of over a year who never knew he had a daughter. Oh, and he was dating two women at once.

Not a great look. 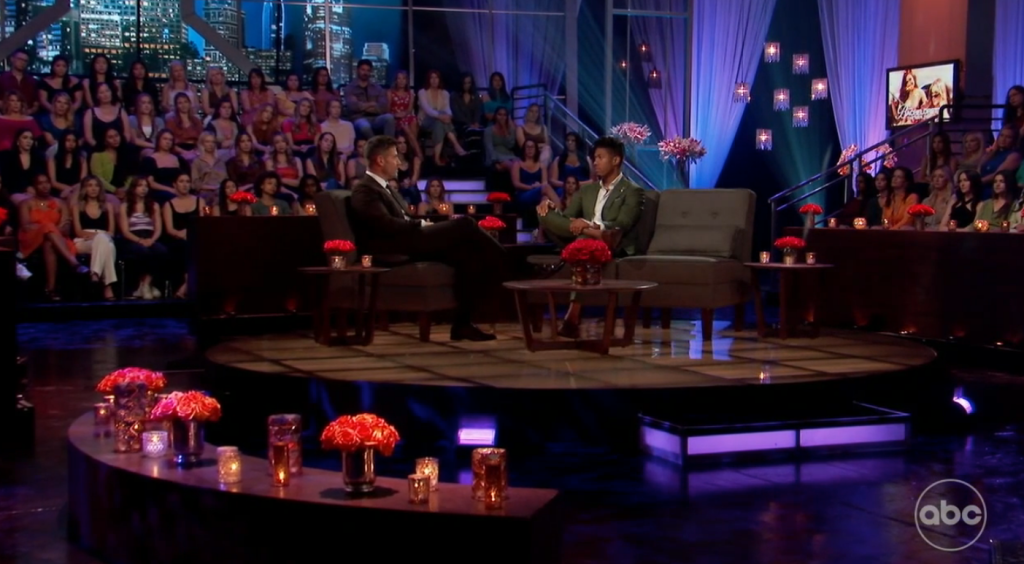 Nate explained that he was recently divorced at the time and that he apologizes for the man he was but that’s no longer who he is.

Then one of the men from the season who I don’t recognize shouted out that Nate had made him a better person.

I smell a bachelor edit.

Fine, let’s talk to Rachel and Gabby at the Men Tell All 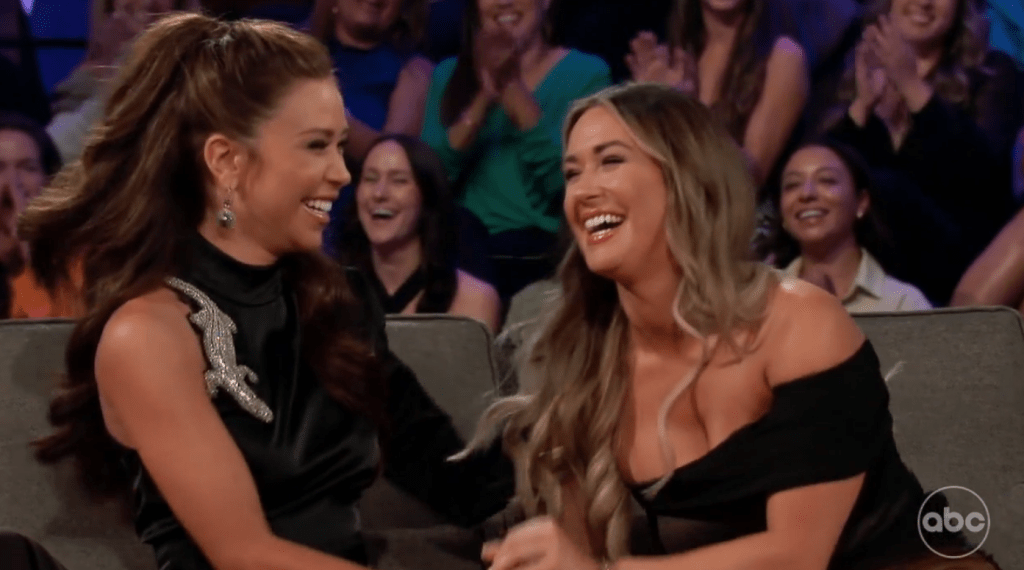 Out came Gabby and Rachel to assure everyone that they still love each other and that ABC did not, in fact, ruin another female friendship.

I’m calling it a win.

The best part of this segment was when Jacob apologized to Gabby for telling her that he wouldn’t have stayed on the show if she was the only Bachelorette. He apologized with a fervor that only a man who fell in love in Paradise and then had to watch this season back with his new love could have. 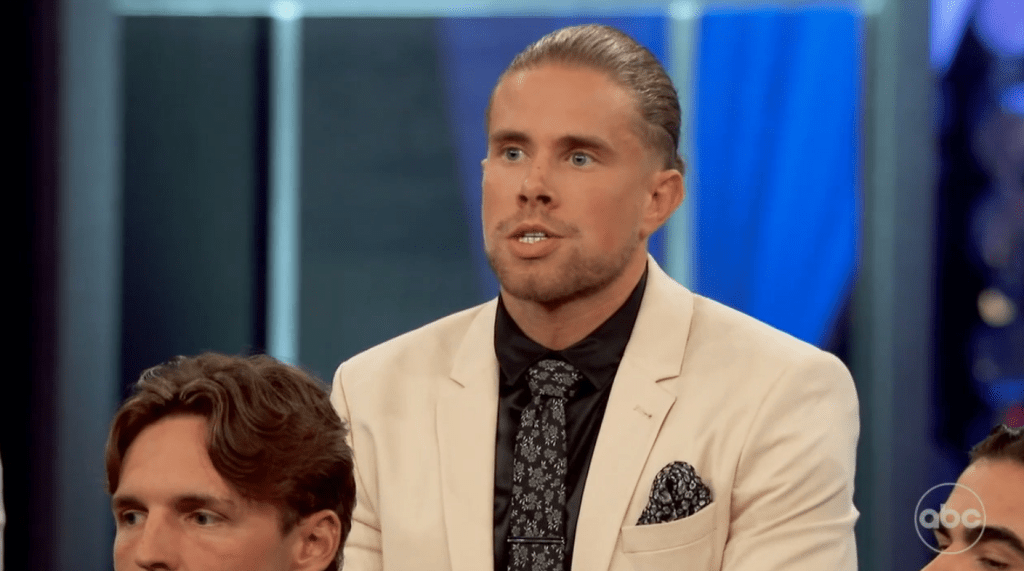 Man, can we watch Paradise now? I need it.

This whole episode was a commercial

No, seriously, the whole episode was a commercial.

There were a few minutes of recap, but then there was a part when Virgin Voyages gave everyone in the audience a free cruise while Jesse Palmer yelled like Oprah. 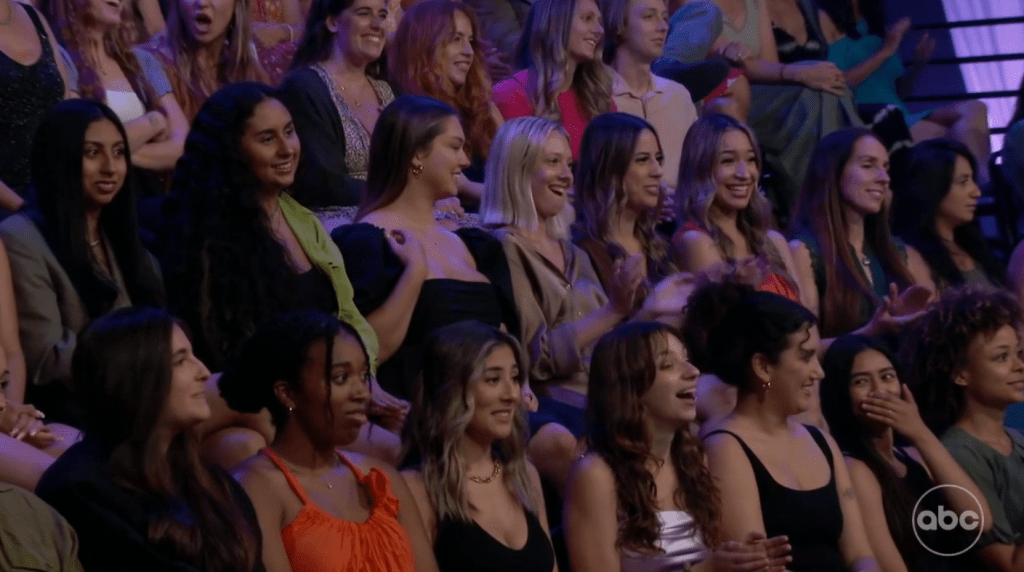 Oh and then there was the ten-minute-long ad for the new season of The Kardashians on Hulu.

But wait, there’s more. How about a whole segment for Billy Eichner and Luke MacFarlane to promote their new movie Bros? At least that part gave us a glimpse at the first gay romcom from a major production company, but they were reaching. 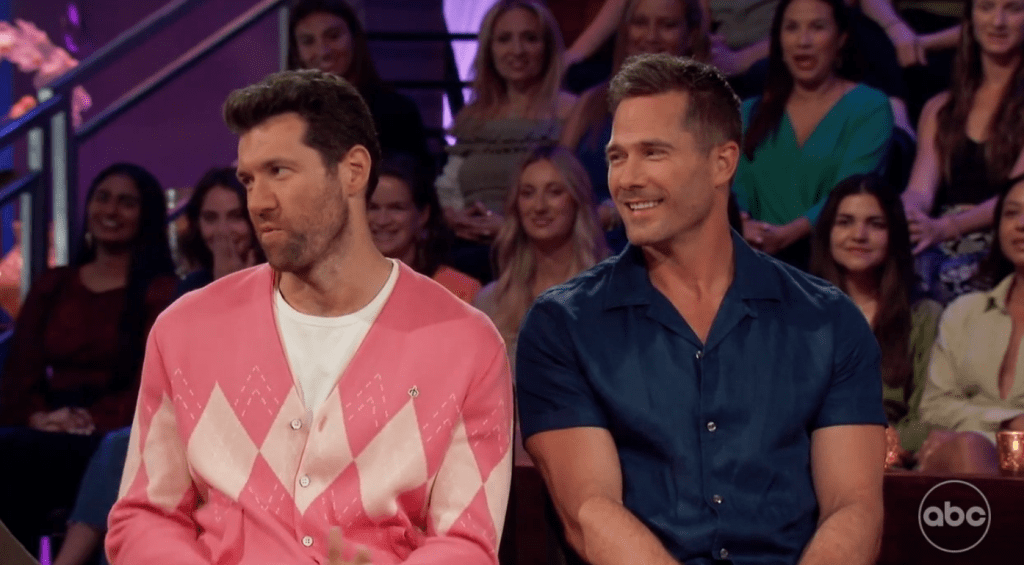 This season is so boring that they just sold half of the airtime.

Then Meatball stripped down to his boxers, poured a jar of spaghetti sauce all over himself, and tackled Billy Eichner.

Wake me up when Paradise is on.

Jk, I’ll be back next week for fantasy dates. Keep me in your thoughts and prayers.