I’m going through changes. So goes the theme song for Big Mouth, an animated comedy series on Netflix that follows a group of Long Island seventh graders navigating the hellscape of puberty. Based on the memories of Nick Kroll and Andrew Goldberg, we follow and cringe as the characters bloom — or don’t bloom — into their adult bodies, filling up with testosterone and estrogen.

Armpit hair. Braces. Pubes. Hormones. Lord of the Flies. Figuring out your sexuality.

My daughter is a tween, and she is also going through changes. She has ditched her American Girl doll collection and is embracing a new collection called “none of your business.” She has braces and wears flannel shirts and UGGS like armor. She loves tennis because she gets to hit something without consequence, but she plays in distressed black jeans “BECAUSE I CAN WEAR WHAT I WANT!”

She knows all about periods — her own having started with the quarantine — , and it’s been a learning experience for Mom, too. I have an IUD and have not had a period since March 2008. So let me tell you, I was shocked at the leaps menstrual pad technology has made in the last 12 years. When I was growing up, “It’s got wings!” was the only advance I got to experience. Did you know there is now a NASA x Kotex collab? It’s wild on that aisle of CVS.

The biggest lesson I want to impart to my daughter is that puberty sucks for everyone. If there is one universal topic that every therapist hears about while handing you a box of Kleenex, it’s middle school is awful for all of humanity. 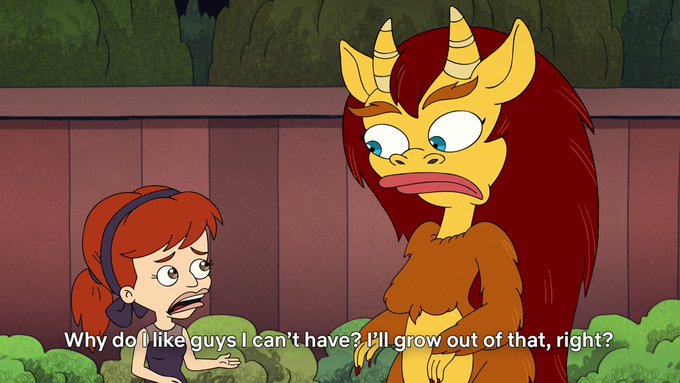 Every time I watch Big Mouth, I think, This would be a great show for my daughter. It’s educational, and it’s empathetic. It’s kind to its awkward characters, and their experiences are normal. I could watch it with her and talk about navigating the school bus hierarchy or the dangers of white shorts. And then someone mentions face fucking.

Big Mouth is filthy, like most seventh grade boys. The show is on-point, but it’s like the realism took a Dexedrine. The filth is . . . heightened.

I want my daughter to have a relatable show like Big Mouth, but with a little less come. (No, I will never spell it with the u.)

A little less “dicks going into other guys’ dicks,” not that gay sex actually works that way.

I don’t think she is ready for circle jerks around a Triscuit cracker. Fucking a tomato might truly feel like fucking a sneeze, but my baby isn’t quite ready for that level of James Joyce realism.

Basically, I want the regular version of Big Mouth for me and a Big Mouth Lite for her.

I love Big Mouth — and anything with Jason Mantzoukas — and I would not change a thing about the show. Big Mouth Lite would be a new show for young Zoomers, and after what that generation pulled on the Trump’s Tulsa rally, they totally deserve it.

Big Mouth Lite would even give us a chance to talk about white privilege and making room for other voices and talent, when she notices the voice of Missy has changed from Jenny Slate to a Black actor in the upcoming season 5.

But if my daughter just happens to find Big Mouth High Octane all on her own when she’s looking for the latest Total Drama episode, so be it. I’ll turn a blind eye to it, like my own Mother did for me when I would lock my door every Friday night at 9 PM so I could watch Miami Vice in private. With my privates.

The Cool Table@thecool_table
1.0K Following 1.0K Followers
@jamiesrule @jamadoria @coolstorymere I know you know this, but I"ve had pixie cuts off and on since 1997 and m*n h… https://t.co/VsXyyN7PpC
3 hours ago
3
@LSULeslie @schizoreads I’ve legit never even heard of this
3 hours ago
@chels__ebooks Yes! Josh O’Connor supremacy! I watched this right after I got obsessed with The Durrells ❤️❤️❤️
3 hours ago
@maria_gb75 Keep him
3 hours ago
@baskinsuns AGREED. I love love loved that as a kid (and vowed to be able to do it so someone would love me)
3 hours ago
1
Archives
Entertainment, Movies, Pop Culture, Raves