If you’ve spent any time at all here at The Cool Table, you’ve heard me talk about my CATEGORIAL comfort reads, my treasured throuple, my favorite fictional folks, my recurring re-reads…The Neighborly Affection series by M.Q. Barber.

I know I’ve mentioned them a lot, and yet this is probably the first time I’ve sat down to write a review of one of the novels on the day of its release. So let me set the stage a bit.

The Neighborly Affection series is about Alice, a single career woman in Boston, who meets her across-the-hall neighbors, Jay and Henry, the day she moves in and sets to wondering what their relationship is all about. Because Jay is flirty, Henry is coy, and their dynamic is elusive. Over the course of the first novel, Playing the Game, Alice ruminates on their burgeoning friendship as she prepares for a special anniversary dinner with them celebrating the day she moved in (and therefore the day they met). That dinner changes her perspective and their relationship.

Over the course of the next THREE novels there is longing, confusion, angst, power exchange, flirtation, seduction and lots and lots of sex between the three of them. What starts out as Alice’s exploration turns into a very fulfilling and trinitarian expression of poly love that absolutely makes my heart BURST. I love these three people and how they love one another. SO much. So much that I’ve read this books more times than I am aware of.

And now … a new installment has released, one it seems I’ve been waiting YEARS for. Minding Their Manners is taking their relationship into familial territory. So far, they’ve conquered personal, professional and psychological fears together, but dipping toes into how their families will react to their unusual relationship has been back burnered. Not anymore.

Barber takes Alice, Jay and Henry into the uncharted waters of confronting the people who know them best (even if they may not love them best) and navigating the tricky confessions and realizations.

You would think that a sixth installment of a series where the main love interests have been officially together for over a year and happily in love for months (and a couple of books), wouldn’t have the power to invoke the kind of tension, angst, and drama that would be needed to keep a reader glued to the pages, at least not without resorting to melodrama or out-of-character ostentation. 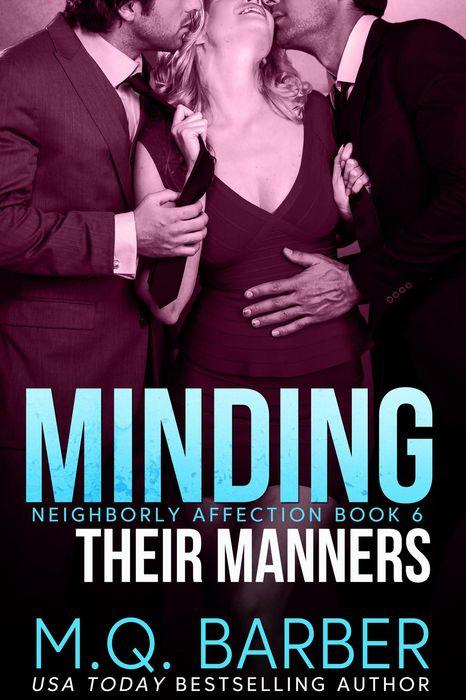 But no. Barber was able to make me worried for the future of the most solidly in love throuple I’ve ever read without sacrificing any of the character traits I’ve come to expect and love while simultaneously ramping up tension with the worst and most powerful villain to date.

When you get this far with a series and with characters, you might expect reading more from them to feel like stepping into a warm bath: comforting and enjoyable but likely to cool you off sooner than you want, especially if you stay too long. But Minding Their Manners is one of the longest books in the series, and one of the most emotionally wrenching and satisfying.

I’ve only had a chance to read it once, but Minding Their Manners will get several more notches on my e-reading bedpost soon enough. Just like its siblings.

… these books are definitely for you.