I just got done reading the debut fantasy novel by Travis Baldree, Legends and Lattes, and it’s sparked an entire new fixation on a genre I didn’t know I needed.

The book is proof that you can definitely judge a book by its cover, and sometimes you should. The cozy, coy illustration by Carson Lowmiller looks like an illustrated fantasy series of our dreams, but the tag line is what got me.

Worlds with high magic, orc battles, political intrigue, magical creatures and terrifying monsters. I love them. But plop a disaffected barbarian orc who just wants to settle down and sell coffee in the middle of one, and give her a succubus love interest and a cast of strange friends? I AM IN LOVE. 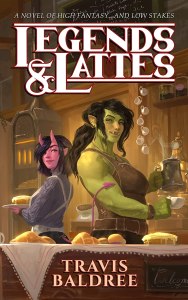 Worn out after decades of packing steel and raising hell, Viv the orc barbarian cashes out of the warrior’s life with one final score. A forgotten legend, a fabled artifact, and an unreasonable amount of hope lead her to the streets of Thune, where she plans to open the first coffee shop the city has ever seen.

However, her dreams of a fresh start pulling shots instead of swinging swords are hardly a sure bet. Old frenemies and Thune’s shady underbelly may just upset her plans. To finally build something that will last, Viv will need some new partners and a different kind of resolve.

A hot cup of fantasy slice-of-life with a dollop of romantic froth.
Baldree provides exactly what the book promises: a cozy story of reinvention and slice-of-life, with the same trappings that readers of fantasy love without the complicated world building, point-of-view shifting, unintelligible proper nouns or convoluted action sequences we are used to in the giant tomes we love.
I’m ready now for a whole slew of high fantasy-low stakes novels where the local inn keeper takes notes on all the clandestine goings on, but really just wants to get his daughter married to the town baker, or the halfling gardener is worried that the secret meetings-of-the-mages taking place in his rhododendron hell are going to spoil his chances of winning Biggest Gourd at the county fair.
This genre is my new personality. Bye.

The Cool Table@thecool_table
1.0K Following 1.0K Followers
RT @meg_eh: About 3/4 of the way through this and it is resonating hard. It’s accurately described with how I’ve felt growing out of faith…
2 days ago
1
@meg_eh Thank you, Megan. We’re so glad it’s resonating. ❤️
2 days ago
1
@BeaDeeH Always been how I prefer it
3 days ago
1
February New Release Books https://t.co/B5jC2dDJhV
3 days ago
3
@hannaearnest I love love loved this book and am talking it up to everyone. Looking forward to the end of the Harpe… https://t.co/lKeIX6a820
3 days ago
2
Archives
book review, Books, Romance