This Tuesday, Michelle Young’s cast will begin their journey to find love on The Bachelorette. Today I will begin my journey of mercilessly judging her future ex-boyfriends by their cast bios.

Only one of us is guaranteed a happy ending. (It’s me.)

Typically I take about a week combing through cast bios and doling out unsolicited advice like the Confucious of aspiring influencers. I also write an entire post introducing the new lead and girding our loins for her love story. However, it’s only a two-week turnaround from the finale of Bachelor in Paradise and I’m currently on a family vacation where 4 of the 5 children attending have a stomach bug, so you get this instead.

Also, I’m super into Squid Games right now and have been dying to play Red Light Green Light but with less murder.

Who is Michelle Young?

First things first, Michelle Young is our new queen and we bow to her greatness. I will accept nothing but loyalty to her crown in the comments. 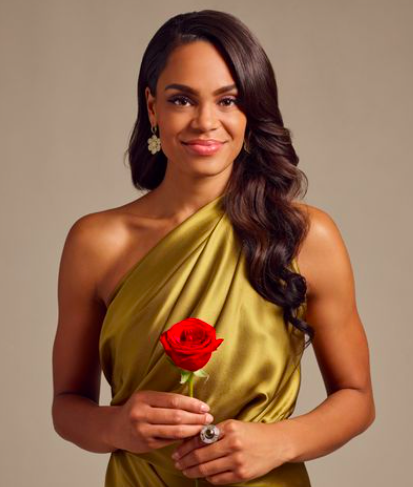 🟢  Michelle is a 28-year-old fifth-grade teacher from Minnesota so you can expect to see kids featured heavily this season. Rumor has it that she passed on being The Bachelorette for Katie’s season because she wouldn’t leave her students without a teacher. That’s the kind of dedication we are looking for in a lead.

🟢. She was a Division-I basketball play and has the biceps of Michelle Obama, so you can expect to see her school the men in sports. This is a good thing because they still filmed her season in quarantine and I can’t watch another picnic by a river.

🟢 As the runner-up on Matt James’ season, Michelle quickly became a fan favorite for her kindness, sense of humor, and immaculate vibes. Also for not having a bunch of pictures from college that needed to be deleted before TikTok found them.

🛑  She has no red lights. Not even the hint of a pink flag.

In this house, we respect Michelle Young.

🟢. All systems are go for Alec, the 29-year-old Engineer from South Carolina who wisely does not think bowling counts as a romantic date.

🛑. Full stop on this statement from his bio: “After his first marriage ended, Alec learned a lot about the value of commitment.” Uh…what happened to cause him to learn that lesson AFTER his marriage ended?

🟢  Brandon J. is a 26-year-old Travel Nurse recruiter from Portland, Oregon who is looking for his best friend and teammate. That’s why I bought my husband an Xbox.

🛑  He loves the Fresh Prince of Bel-Air but it stopped airing the year he turned one and that makes me feel old.

🟢  Brandon K. is a 29-year-old Brand Manager from Austin who always buys travel insurance. This is the level of anxiety I need in a travel partner.

🛑  He loves the Cha-Cha-Slide which gives major Pilot Peter vibes. 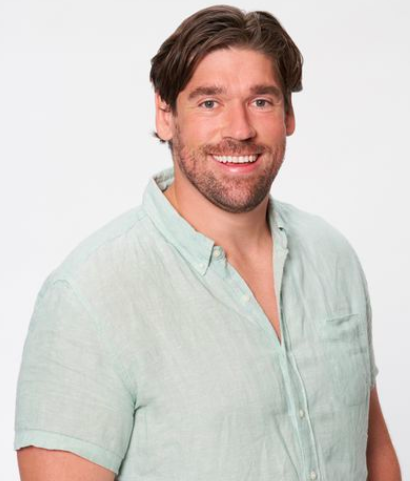 🟢 Bryan is a 31-year-old NFL player from Chicago who has been to every continent except Antarctica. He loves to travel and make big romantic gestures.

🛑 He listed his job as an “NFL Player” but he was released from the Falcon’s practice squad last month.

🟢 Casey is a 36-year-old Advertising Creative Director from Miami who likes to camp but hates sleeping in tents. Which, same, that’s what hotels are for.

🛑  This sentence: “Though he loves life in Miami, he says he has outgrown the local dating scene where women care more about their Instagram stories than making meaningful connections.”

🟢  Chris G. is a 28-year-old Motivational Speaker from Novia Scotia, Canada who is looking for a good person to be in a committed relationship with.

🛑  A motivational speaker who likes escape rooms has two cats named Cat and Small Cat, and wears hoodies with a suit jacket is a guaranteed sociopath.

🛑  He says he doesn’t have a specific type and only falls in love with someone’s insides. I say he’s a liar.

🟢  Clayton is a 28-year-old Medical Sales Representative from Missouri who is going to be the next Bachelor. Sorry if that’s a spoiler for this season, but it’s been mentioned literally everywhere.

🛑  He has a rapping alter-ego named “Clay-doh.”

🟢 Daniel is a 26-year-old firefighter from Austin, TX who loves being an uncle to his four nieces.

🛑 Any person who says they love Christmas music as a defining characteristic terrifies me.

🟢  Edward is a 27-year-old Wellness Coach from Los Angeles who loves his dog, Willow.

🛑  Edward is a 27-year-old Wellness Coach from Los Angeles who loves his dog, Willow.

🟢  Garrett is a 33-year-old Tech CEO from Salt Lake City who dropped out of college to start his own tech company and now lives a life of adventure.

🛑 He will only date women who want children but also enjoys skydiving, paragliding, and speed flying. That sounds like a one-way ticket to single parenthood.

🟢  Jack, a 30-year-old former Army Officer from Philadelphia, is a shy guy who prefers a woman who is strong and outgoing and can push him out of his comfort zone.

🛑  He will throw up if he sees an onion. I have questions.

🟢  Jamie is a 32-year-old Bio-Tech CEO from San Diego who loves to travel to spontaneous destinations and wants a partner who is down for an adventure.

🛑 “Jamie has never watched an episode of reality TV in his life.”

🟢 Joe is a 28-year-old Real Estate Developer from Minnesota who played basketball for the University of Minnesota. Why do these two seem perfect for each other?

🛑  He is scared of spiders and there’s only room for one of those in my imaginary relationship with him.

🟢  JoMarri is a 26-year-old personal trainer from Fresno who dreams of owning a gym someday.

🛑 He eats an entire watermelon every morning. Every. Morning.

🟢  Leroy is a 27-year-old Biomedical PhD Student from Texas who was born in Italy to his Ghanaian parents. He loves brunch and holding hands with the woman he loves.

🛑 I mean…he’s working towards his PhD so he’s probably swimming in student debt, but otherwise Leroy seems like a safe bet.

🟢  LT is a 38-year-old Yogo Guru from Bellevue, Washington who has his grandfather’s initials tattooed over his heart.

🛑  In his own words, LT has “never had to worry about much in his life” and loves a good spin class. There’s not enough caffeine in the world.

🟢 Martin is a 29-year-old Personal Trainer from Miami who emigrated from Argentina as a kid and can cook basics “very well.”

🟢 Mollique, a 36-year-old Academic Administrator from San Diego, is a self-described “domesticated renaissance man” who has an 8-year-old son.

🛑 His favorite author is Nicholas Sparks so either he’s a liar or he has bad taste.

🟢  Nayte is a 27-year-old Sales Executive from Austin who is 6’8″ and loves edible arrangements.

🛑 He wants a partner who is outgoing, spontaneous, and can match his swagger. This is why people get golden retrievers.

🟢 Olu is a 27-year-old IT analyst from New Jersey. He’s a former D1 basketball player just like our girl Michelle and he’s here for her specifically.

🛑 Uh, maybe that he’s too perfect for her?

🟢 Pardeep is a 30-year-old Neuroscientist from Brooklyn who “studies the brain to find cures for diseases like Parkinson’s and Alzheimer’s.” Sir, this is The Bachelorette.

🛑 He loves Comic-Con. I feel like that one is self-explanatory.

🟢  Peter is a 26-year-old Pizzaprenuer from Florida who studied in Italy to own a successful pizzeria.

🛑 I don’t even know where to start. One, Pizzaprenuer is a stupid word. Two, he is from Florida and specified in his bio that he doesn’t want a woman who talks about politics on dates. Three, he doesn’t like libraries. He’s a walking red light.

🟢 PJ is a 30-year-old Firefighter from Houston who is a natural caretaker. He’s the last single man in his group of friends and he’s ready to settle down.

🛑 He enjoys working on Rubik’s Cubes which feels like it should be a red flag, but he’s cute so I’d probably paint the squares on my body.

🟢 Rick, a 32-year-old Medical Sale Representative from Los Angeles, is a hopeless romantic who loves a good game night. At least you know your grandma will have a lot in common with him.

🛑 The movie “Hitch” apparently taught Rick everything he needs to know in life. You know, the one where Will Smith is a dating coach who is bad at dating? Seems ominous.

🟢 Rodney is a 29-year-old Sales Representative from Rancho Cucamonga, CA who is looking to fall in love with a fellow former student-athlete. Those D1 genes don’t come for free.

🛑 He is “very into intermittent fasting” but only during weekdays. I’m scared to ask what happens on the weekends, but I think I’d be into it.

🟢 Romeo, a 32-year-old Mathematician from NYC, is a Harvard grad who loves to salsa dance and studied Japanese.

🛑  He’d like to go to Burning Man one day. There’s always one.

🟢 Ryan is a 30-year-old Environmental Consultant from San Jose, CA whose family owns a raisin ranch.

🛑  He loves spreadsheets and self-describes as a “planner.” As someone who has both of those same characteristics, believe me, it’s a red flag.

🟢 Spencer, a 25-year-old Financial Crimes Analyst from Ohio, is a single dad who says his son is his inspiration. He also loves to spend time in the hot tub. Spencer understood the assignment.

🛑  He hasn’t dated much since the birth of his son but he signed up for this show which makes me question his decision-making ability.

🟢 Will is a 28-year-old Academic Interventionist from Michigan who is tired of being the last single person in his friend group. He’s a true romantic who wants a woman who will push him to be the best he can be, and he’ll return the favor.

🛑  He’s a Leo who hates getting money as a gift. I cannot hit the brakes fast enough.

You Know What to Do

That’s all 30 men from Michelle Young’s cast! Now that you’ve been introduced to them it’s time to:

No really, join it. I know you have to log in which feels like a pain, but it takes 5 minutes and then you get to have me curse you under my breath every Tuesday when I see the rankings.

Michelle Young’s season of The Bachelorette premieres this Tuesday, October 19th on ABC. I’ll have recaps posted every Wednesday morning unless the plague hits my house again or something. Who is in your top three based on their bios? Are you excited for the season? Let’s talk in the comments.

The Cool Table@thecool_table
1.0K Following 1.0K Followers
Yesssssss https://t.co/rGaJC4TAJ4
2 mins ago
1
Latto Brought Big (Villain) Energy to #TheBachelor for episode two of Zach's season. https://t.co/qyqmqEZIpH
10 hours ago
1 4
@pagemelt I know nothing about them but it's a good assumption since the album is titled Dear Wormwood. I have so m… https://t.co/rXXSQbWwlG
12 hours ago
2
@pagemelt isnt the whole album based on the screwtape letters? RED FLAGs
12 hours ago
1
@MrsKowski unfortunately yes
12 hours ago
Archives
Book Club, Books, Fantasy