Welcome back to the recap of a show that is completely impossible to summarize because there are eleventy million characters featured over four hours and two days while David Spade hosts. That’s right, it’s week two of my attempt at a Bachelor in Paradise recap and I’ve never been more exhausted or entertained.

Last week I accidentally went viral for putting laxatives on my face like Kelsey did in the premiere episode.

The possibilities are endless as to what this week will bring. 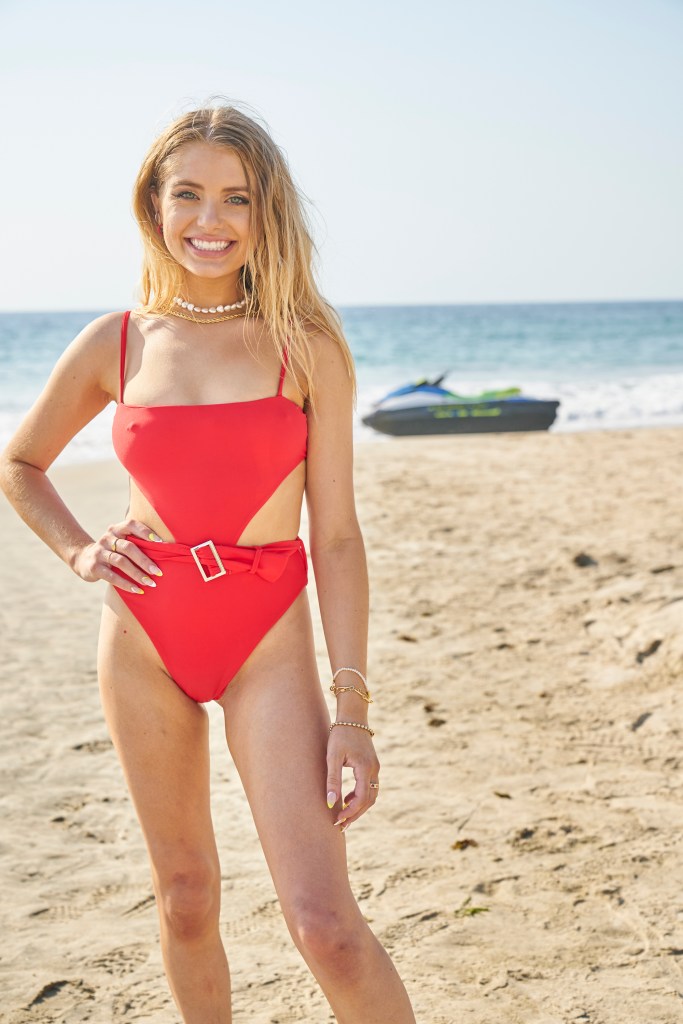 As a reminder: the men have the roses this week, it’s the second day in Paradise, the theme song is back, and here comes Demi Burnett to stir ish up.

We all know that Demi is attracted to all types of humans (including, apparently, David Spade whom she called Joe Dirt) but she’s here for men this time around. There will not be a secret girlfriend showing up on the beach this season. Not that we can trust them to be honest.

In her own words, Demi is here to “f**k some s**t up” so the moment she entered the beach she invited Brendan on her date. Natasha was bummed not to spend the day with the guy she was vibing with but not as disappointed as Demi was about to be.

After a day of jetskiing and kissing on the beach, Brendan told Demi that he wants to keep his options open. Actually, he said he wants to “see if our paths pass again along this journey.” What is this, a hallmark card?

Demi was furious to be rejected. Her ego was bruised and she kept doing that deep laugh that makes her sound like Seth Rogan. It was scary and kinda hot.

Brendan Gets the Stagecoach Edit

Meanwhile back at the beach, Brendan’s initial connection, Natasha is in her feels because she doesn’t want to lose her man.

Hold that, Natasha, because the other women are getting bored on the beach and spreading the news that Brendan has a girlfriend already. Things are about to get ugly.

Allegedly Brendan has been hanging out with Pieper from Matt’s season. In fact, the rumor is that he’s just biding his time waiting for her to show up on the beach. In which case he doesn’t want Demi or Natasha.

When Demi heard this she spiraled and accused him of wasting her time. But when Natasha heard it she approached him maturely and asked him to explain.

Imagine how boring this show would be if everyone was a Natasha.

He told her that, yes, he has a previous relationship with Pieper but that his connection with Natasha is much stronger. And she bought it.

I’ll let this slide until Pieper shows up because we all that’s going to be messy as hell.

Ivan and Jessenia Get Serious

Oh yeah, this show is about to be about falling in love. Fine.

Here’s a date between Ivan and Jessenia where they have a genuine connection and are lovely together. Happy now?

They had an important conversation about how difficult it was to be a woman of color on Matt’s season (and it was truly horrific, you all need to be ashamed of yourselves for jumping in these women’s DM’s), but overall this date was just fine.

Go fall in love and leave me in peace to watch everyone fall apart on the beach.

I’m Not Ready to Say Good-Bye

It’s time for the cocktail party which will be followed by a rose ceremony where the men are in charge. It’s also apparently the end of David Spade’s guest role. I, for one, will miss him.

There was a little bit of drama where Aaron made out with Serena before Tammy pulled rank and mounted him on a daybed, but otherwise, it was all about Victoria P. and James.

James only had eyes for Victoria P. which worked for her because she needs a rose this week. What wasn’t working for her is her short-term memory, because she couldn’t remember the man’s name for the life of her. She must have referred to him as “Jordan” 15x.

James was going to give her the rose no matter what but then Tammy and Kelsey told him that Victoria P. has a whole ass country singer boyfriend back in Nashville and she’s just using him for clout.

Victoria P. tried to get herself out of the mess she created. She scrambled around the beach denying everything and saying it wasn’t true.

But then she quit the show.

So, take from that what you will.

The Men Make Their Choices at the Rose Ceremony 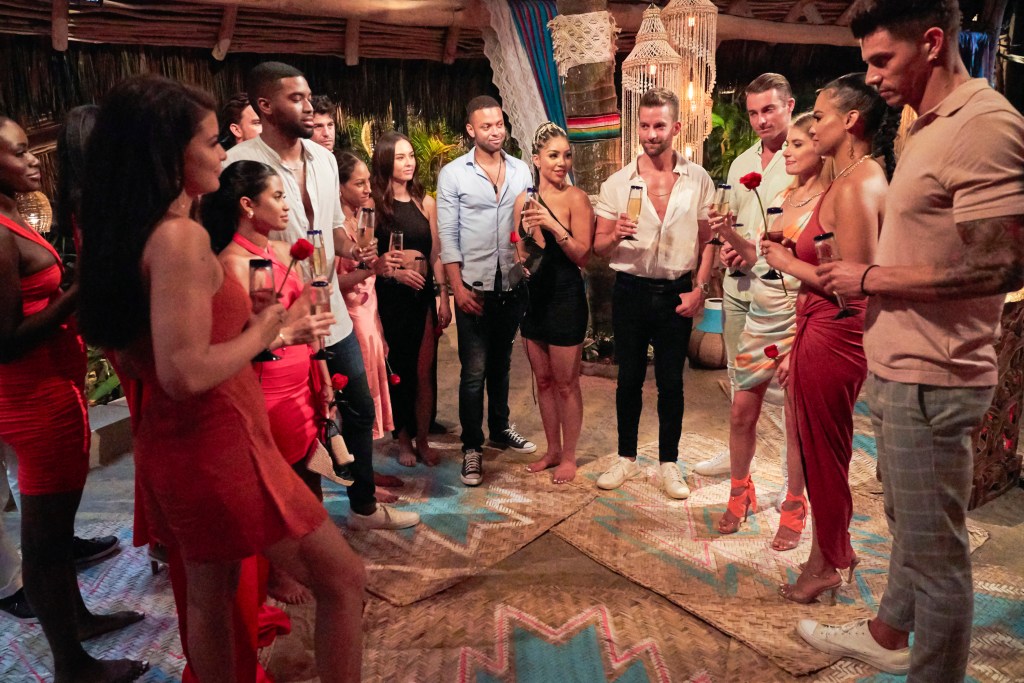 At the rose ceremony, there were 10 men and 13 women remaining which meant 3 would be going home. The couples went like this: Ivan and Jessenia, Noah and Abigail, Joe and Serena, Maurissa and Connor B., Tre and Tahzjuan, Deandra and Karl, Brendan and Natasha, Aaron and Tammy, Kenny and Mari, James and…

Then Kelsey almost passed out. It didn’t matter how much milk of magnesia she put on her face, she was clammy, sweaty, hot, and feeling the pressure.

Once she pulled herself together James picked Demi (obviously, like the producers would allow anything else to happen) and goddess Victoria L., flight attendant Serena C., and laxative face mask Kelsey went home.

Two Episodes Of Bachelor in Paradise Are Better Than One

Fast forward 24 hours and we’re back for episode two of the week. Is this how people who watch Love Island feel?

First things first, David Spade is out as host and Lance Bass is in. Yes, Lance Bass from NSYNC. We are not worthy of this show.

Oh, and now that the first rose ceremony is over, the ladies have control of the roses which means more men are on the way to mess everything up.

Finally, it’s the moment I’ve been waiting for ever since Katie Thurston sent him packing home after her men unionized against him.

Thomas is in Paradise.

Everyone from his season hates him because he wanted to be #thebachelor. Everyone who is attracted to men loves him because he’s stupid hot. It’s perfect Bachelor in Paradise fodder.

After making the same joke about his height (he’s 6’6″ and absolutely will tell you about it) over and over he asked Serena P. on his date.

Yes, the same Serena P. who sad Joe is into.

Serena P. and Thomas rode an inflatable banana, kissed in the ocean and talked about his experience on The Bachelorette.

Joe sat at the bar looking sad and asking Wells how he’s supposed to nap while his girl is off on a date.

After the date, Serena found Joe and reassured him that she told Thomas to pursue other people. And she told Joe that he’s the better kisser between the two.

Thomas VS the guys

While Serena and Joe were reuniting, Thomas was trying to figure out why the hell all of the men from his season still hate him. 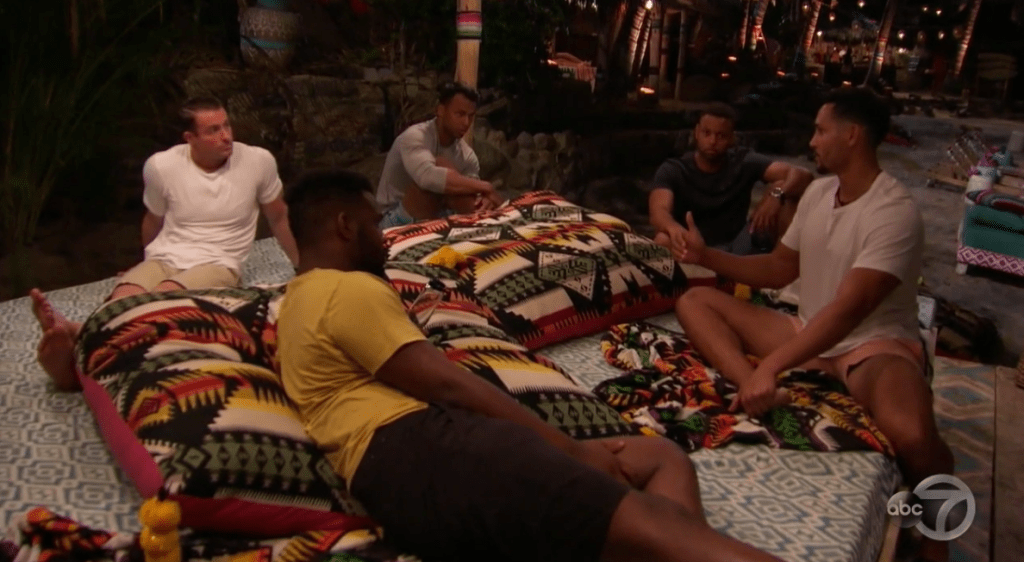 So, Karl brought him over to where they had all gathered to hash it out together. I have to admit. This was was a mature, calm convo so I kinda checked out.

Basically, Thomas apologized for everything he ever did to them, but I still argue that he didn’t really do anything bad so the whole thing was obnoxious.

Whatever, in the end everyone (except aggro Aaron) seemed to accept the apology but especially Tre. That man’s ability to forgive amazes me. He’s not even bothered that Tahz dated his uncle.

So, after all of that, it looks like Thomas is going to get a fresh start.

Oh, wait, no, sorry. Here comes “I don’t want to be involved in the drama” Serena to tell everyone that Thomas told her Tre was not “emotionally strong.” That’s not actually what he said, but we have four hours a week to fill so who cares.

After that Tre went full Shakespearan on Thomas with “you’re dead to me” and “a curse on both your houses.” Thomas is not to speak to Tre again under penalty of death. Or something.

So much for world peace.

Next up on the beach was Riley from Clare/Tayshia’s season. But when I say Riley I mean his biceps because the dude is JACKED.

Tahzjuan was losing her mind over him. She said she came on the show for him, and that she manifested his presence on the beach.

Obviously that meant he took Maurissa on his date.

Maurissa was sent home the first night of Peter’s season so we know nothing about her.  But she did tell Riley that she’s never been on a real date before.

Sorry Maurissa, but you still haven’t because this “date” with Riley was actually a game hosted by Lance Bass.

The rules were that if they didn’t want to answer his increasingly personal questions in front of each other, America and God, they had to eat something “gross.”

Have they ever slid into a celebrity’s DM’s? Easy.

How many people have they slept with? They’re eating tongue.

I’d love to talk about how culturally insensitive it is to make people eat very normal food from other countries and label it as gross, but you all aren’t ready for that conversation.

After the game they shared some vulnerable stories and kissed. A lot. Like a lot a lot. So much that they ended up in the boom boom room. If you don’t think you know what the boom boom room is, the moaning noises should clear things up.

See? Told you we aren’t worthy.

In conclusion, this show is so hard to recap, there are way too many people on it and Tahzjuan must be protected at all costs. We have two more episodes to look forward to next week so ration your wine and report back for another recap.

The Cool Table@thecool_table
1.0K Following 1.0K Followers
RT @BlessAmysHeart: And @bethorne created a reading list/reference guide she mentions during the show. I say Beth is the brains, and I’m th…
15 hours ago
1
RT @BlessAmysHeart: Want to know what I believe now after leaving the #Evangelical church? Check out the latest episode of our #Exvangelica…
15 hours ago
2
@chels__ebooks if you can't HEAR and SEE it, you aren't fit to lick booktok's boots
19 hours ago
4
Archives
Apple TV+, Entertainment, Fashion, Lifestyle, TV

Did I Like The White Lotus Or Was It Just Vibes?