I’m a sucker for two things: accents and Jamie Dornan. Ever since he first graced the screen in a powered wig and breeches in Marie Antionette, Jamie Dornan has been my celebrity hall pass. Not even the Fifty Shades trilogy and his horrendous American accent could take that pass away from me. Don’t judge me but The Fall may have granted him permanent hall pass status.

This week, fate smiled down upon me and gave me the new trailer for Wild Mountain Thyme, starring Jamie Dornan and his actual, God-given Irish accent.

Prepare for all the Irish goodness…

The film is being touted as an Irish romantic comedy, and ever since Normal People, I am all for watching the Irish fall in love and fornicate in the rolling hills of heather. Is Wild Mountain Thyme going to be a contender for award season? Probably not. Can we essentially watch the trailer, figure out the ending? Of course. Is it something I’m going to stream on a cold, rainy night with a glass of wine in my hand? Absolutely.

The headstrong farmer Rosemary Muldoon (Emily Blunt) has her heart set on winning her neighbor Anthony Reilly’s love. The problem is Anthony (Jamie Dornan) seems to have inherited a family curse, and remains oblivious to his beautiful admirer. Stung by his father Tony Reilly’s (Christopher Walken) plans to sell the family farm to his American nephew (Jon Hamm), Anthony is jolted into pursing his dreams in this comedic, moving and wildly romantic tale.

Sure, Christopher Walken seems to be an odd casting choice and his Irish accent is practically a parody of the Lucky Charm’s leprechaun (Just search #WildMountainThymeAccent in Twitter and bask in all the the memes and gif responses glory). However, I’ll forgive it because we’re getting a romantic comedy in a time when we all need a good romantic comedy. Plus, this trailer is two minutes and 50 seconds of just absolute joy. Remember joy?

First, let us  just take a moment and relish those beautiful shots of Irish countryside. Since I’m pretty much not going anywhere that doesn’t require me to quarantine in a hotel room for 14 days, I’ll settle on this film.

Secondly, Emily Blunt is an international treasure, who could read the fine print on my iPhone update’s term and conditions, and I would still watch. The Mrs. John Krasinski doesn’t just win in real life, she has to also make you jelly in her films because apparently, there’s going to be a love triangle between her, Jamie, and Jon Hamm. Essentially, replace me with Emily and it’s number 84 in my 100 things I want to do before I die list. Take out Jon Hamm and add Adam Driver, and it becomes number 3.

Then, Jamie Dornan’s sideburns. That’s it. That’s the tweet.

Finally, this shot of Jamie carrying Emily up an Irish countryside hill? We deserve this moment. 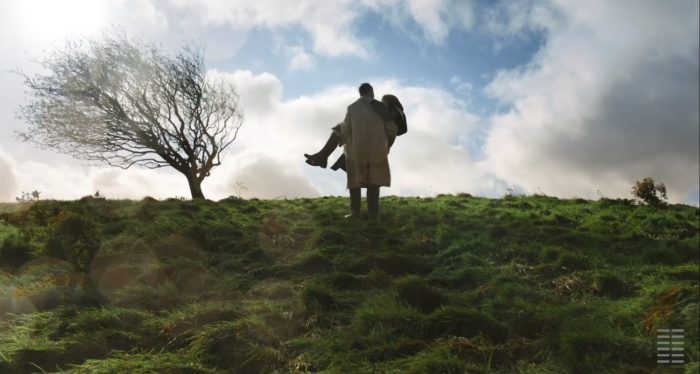 The Cool Table Has a Podcast Now!@thecool_table
1.0K Following 988 Followers
Getting my hate watch britches on for this one. https://t.co/SZ1N40HOHi
12 hours ago
3
So excited to be a guest on Sierra & Ryan Talk the Tok: it’s a #booktok podcast! Go listen and give them a follow. https://t.co/qzOVPWS1Bh
5 days ago
2 6
SooooOOoOoOooo it's almost #SDCC time. We're getting all our cosplays and deodorant choices in a row. Who else will be there?
6 days ago
6
@ch00chelo DEAR LORD VIVEK OJI has been the best book I’ve read this year
2 weeks ago
2
Holy shit the last episode of Kenobi
2 weeks ago
4
Archives
Entertainment, The Bachelor, TV

Tayshia Adams is Here to Save The Bachelorette

Netflix’s Rebecca: The Devil Is In the Details

Midnight Sun and Twilight: Dinner and a Movie and a Book