You know that one friend who shows up late to everything, but they’re also the life of the party, so you love them anyway? That’s Tayshia Adams rolling up at the last possible moment to save this season of The Bachelorette.

Last week, Clare Crawley bailed with Dale Moss on her arm and a huge diamond on her finger after less than four episodes as The Bachelorette.

This week, Tayshia Adams picked up her mantle and began dating the 16 men that Clare abandoned in quarantine.

We all deserve a season of Bachelor in Paradise after this.

Who is Tayshia Adams?

Typically I would have written a post introducing Tayshia as our next lead prior to her season beginning. However, since her season began in such an odd way – while in the middle of arguably the most stressful political week in recent American history – I never got around to it.

Here’s what you need to know: 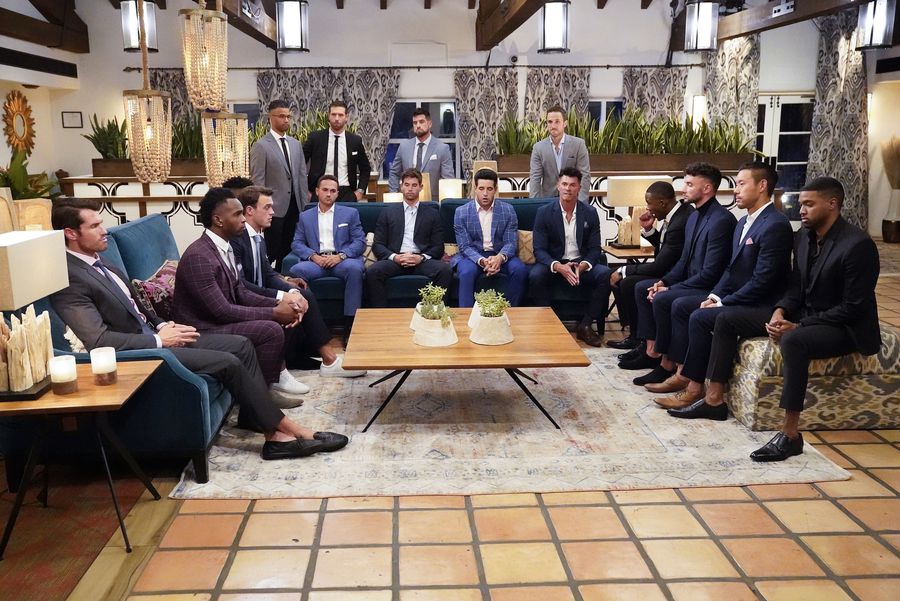 Apparently, the 16 rejected men (Bennett, Eazy, Jordan C., Jay, Jason, bearded Blake, Kenny, Zac C., Riley, Brendan, Joe, Ivan, Chasen, Ben, Ed, Demar) had suffered enough so they didn’t have to to go through the whole rigmarole of night one limo introductions again. Instead, they made Tayshia walk awkwardly into a room to surprise them. They were all happy to see her, but I was distracted by the complete lack of socks in the room so I stopped paying attention.

Just as Tayshia was getting to know her future ex-boyfriends, Chris Harrison arrived to let her know that he had a surprise for her. It was a limo of new recruits for the quarantine cult! Finally, some new blood in this place to mix things up. Will there be funny intros? Love at first sight? Sorry, no, it was four men who were completely indistinguishable from the ones she had just met. 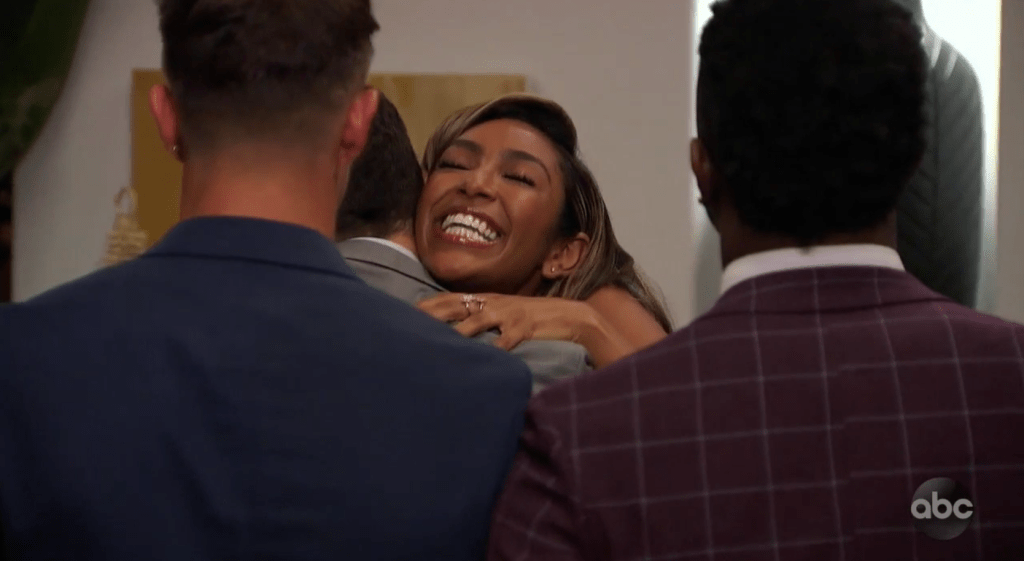 Spencer, Montel, Peter, and Noah joined the rest of the reverse harem to a less than enthusiastic welcome. Basically, the original men felt they’d paid their dues with Clare and that they’re owed Tayshia’s attention. “Can’t we ever get a break?” one moaned while on a television dating show at a four-star resort while the rest of the world was burying grandma over Zoom.

Ugh fine, it’s time to watch Tayshia make the same tired small talk we’ve heard from these guys for five weeks. I’ll make this quick; Tayshia, like nearly all of her preceding Bachelorettes, appears to like hot white guys in skinny suits with dark hair. If I were to guess based on their interactions, her top four from night one would be Spencer, Zac C., Brendan, and Noah. If you can tell the four of those men apart then god bless you. 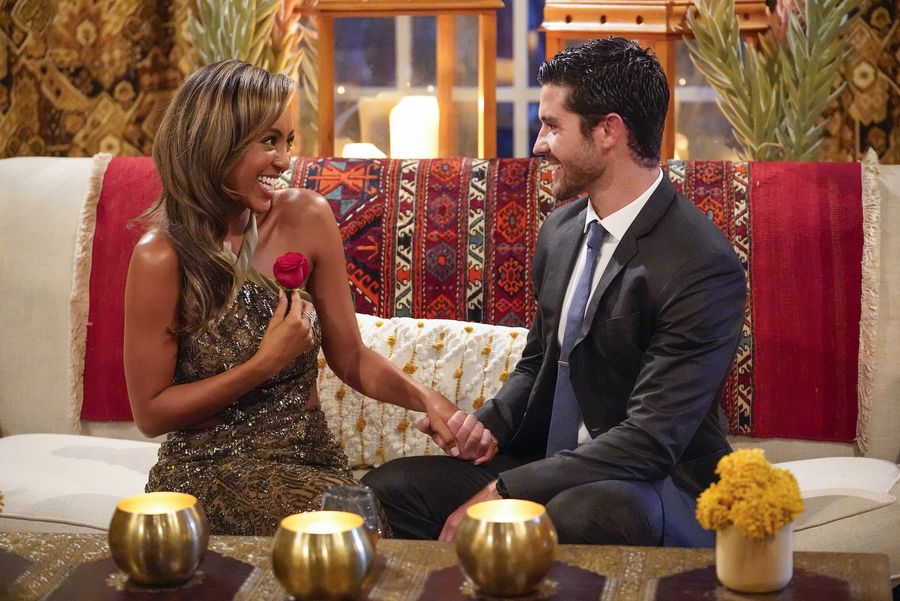 She gave her first impression rose to Spencer, a soft-spoken 30-year-old water treatment engineer from San Diego. Tayshia said that her heart skipped a beat when he exited the limo and I was like, “NOT THIS AGAIN.” Then the rest of the rose ceremony got canceled once again because Tayshia needs more than 15 minutes on the show before she starts cutting men. Let me do it, Tayshia, I’m ready.

Just when we were starting to move on with our lives, Chris Harrison interrupted the episode to interview Clare and Dale. If you didn’t think they were in love before, this interview would prove you wrong. These two are obsessed with one another. We’re talking head-over-heels, ready to make babies, willing to move to Sacramento, IN LOVE. I don’t care what everyone else says, they’re in love. Let them live! 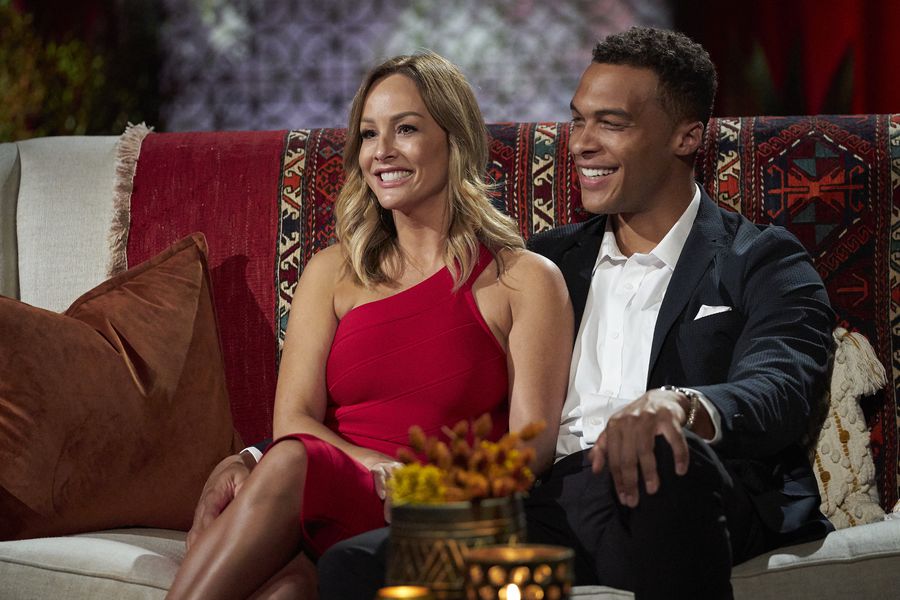 Now go away. Love is boring.

(Warning: I’m about to list 10 names that sound like they’re from a Sweet Valley High book, but they’re real people on this season.)

Blake, Riley, Zac, Jordan, Noah, Peter, Kenny, Jay, Eazy, and Spencer got the first group date of Tayshia’s half-assed season. This mostly involved seeing Tayshia step out of the pool in a bikini and the men playing “Splashball” in speedos. For the record, Splashball is just basketball in the pool. Why they needed to rename it is beyond me. 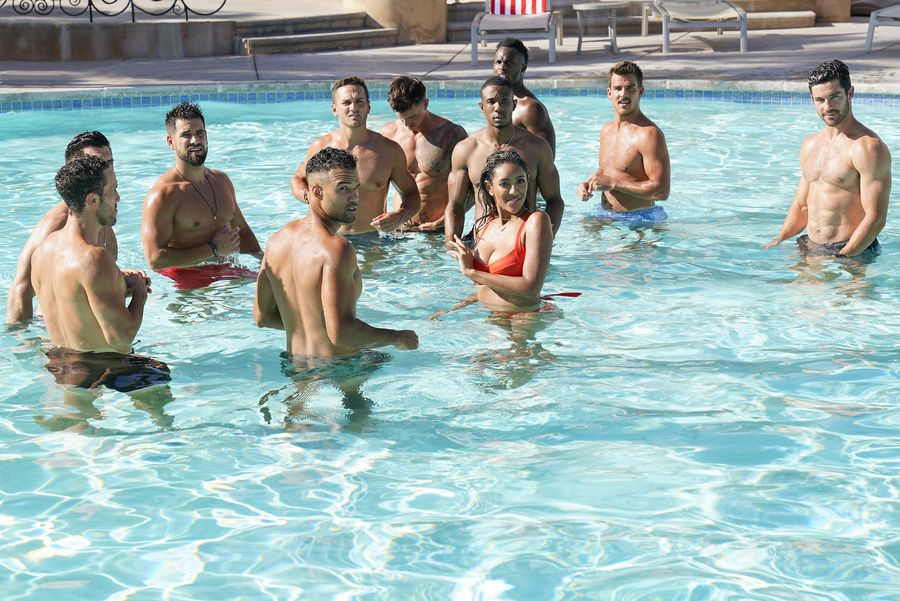 At the after-party that night, Tayshia continued to connect with Zac C. and Spencer, but the date rose went to Eazy. That may have something to do with the argument Riley and Spencer started in the pool and continued into the evening. None of the OG men like Spencer. They say it’s because he’s a dick, which…sure, but I can’t help but think that Riley refers to him as “lunchmeat” because Spencer is a clear frontrunner. For what it’s worth, Tayshia wants to eat Spencer up like lunchmeat too so maybe the nickname will stick. 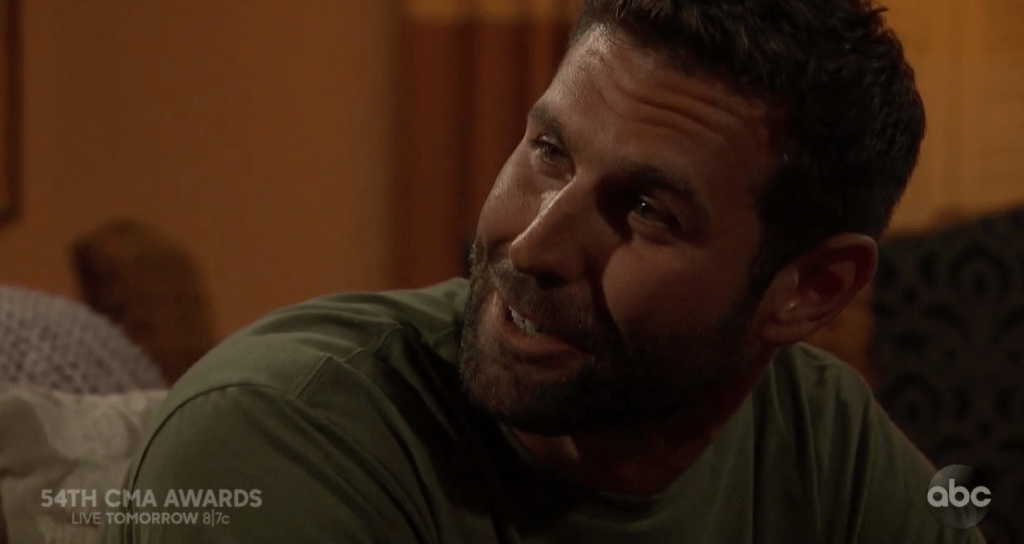 If you were fortunate enough to forget, a few episodes ago, Clare took Jason on a one-on-one date to trauma bond and scream around a bonfire in the parking lot of their hotel. Apparently, it made quite an impact on Jason, because he now thinks he is in love with Clare. You guessed it, he’s leaving the show. Buddy, she took one look at Dale and forgot you existed. See you in Paradise.

Brendan Gets Back on the Horse

Tayshia’s first one-on-one date went to Brendan the 30-year-old commercial roofer from Massachusetts with gorgeous blue eyes. They went for a horseback ride around the resort while Chris Harrison scootered around in a tight polo shirt from one location to another pretending to fill the role of hotel employees. Quarantine jokes, hilarious. 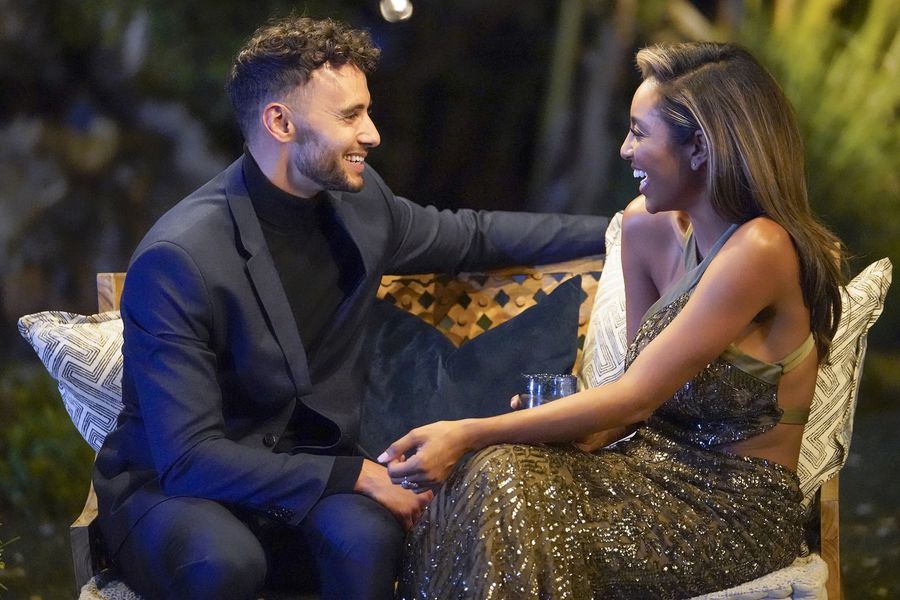 Tayshia and Brendan have chemistry that drips from the screen. Their date was fun, but it was when the two of them bonded over their shared experience of being married and divorced in their early twenties that things became real. You could see the relief fall off of Brendan’s shoulders when he realized that Tayshia wasn’t going to judge him for his past, rather, it created a platform for their relationship to build on. He got the date rose and they kissed under a fireworks show while the music swelled. I think these two just made me a believer.

Then Tayshia said she wants five kids and I snapped out of it.

Next Monday, Tayshia’s journey will continue with oily shirtless men up on group dates and infighting among her boyfriends. Sigh, everything is right in the world. Now, all we need is more screen time for Bennett and everything will be right in Bachelor Nation again.

The Cool Table@thecool_table
1.0K Following 1.0K Followers
Yesssssss https://t.co/rGaJC4TAJ4
1 hour ago
1
Latto Brought Big (Villain) Energy to #TheBachelor for episode two of Zach's season. https://t.co/qyqmqEZIpH
9 hours ago
1 4
@pagemelt I know nothing about them but it's a good assumption since the album is titled Dear Wormwood. I have so m… https://t.co/rXXSQbWwlG
10 hours ago
2
@pagemelt isnt the whole album based on the screwtape letters? RED FLAGs
11 hours ago
1
@MrsKowski unfortunately yes
11 hours ago
Archives
Current Events, News, Politics

Winning During Scorpio Season Is The Best Kind of Winning