Watching The Bachelor‘s Women Tell All episode is like accidentally getting added to a group chat of friends who secretly hate each other. Only instead of normal people, they’re aspiring Instagram influencers and the only thing that unites them is their shared disdain of Peter Weber. Basically it’s Twitter.

But First, A Rose Ceremony

When we last saw Pilot Pete he was kissing Madison’s forehead and begging her to stay after he admitted that he had been intimate with someone(s) else. You know, normal conversations you have with someone you’re thinking of proposing to in less than a week.

If Madison stuck with her very reasonable guns, Victoria and Madison should have an easy rose ceremony ahead of them, right? Not so much. Instead they stood in wedding inspired evening gowns on a freezing cold bluff waiting for Madison and her eyelashes to make up their collective minds. Eventually, Madison did arrive wearing red, many layers of mascara and a frown. 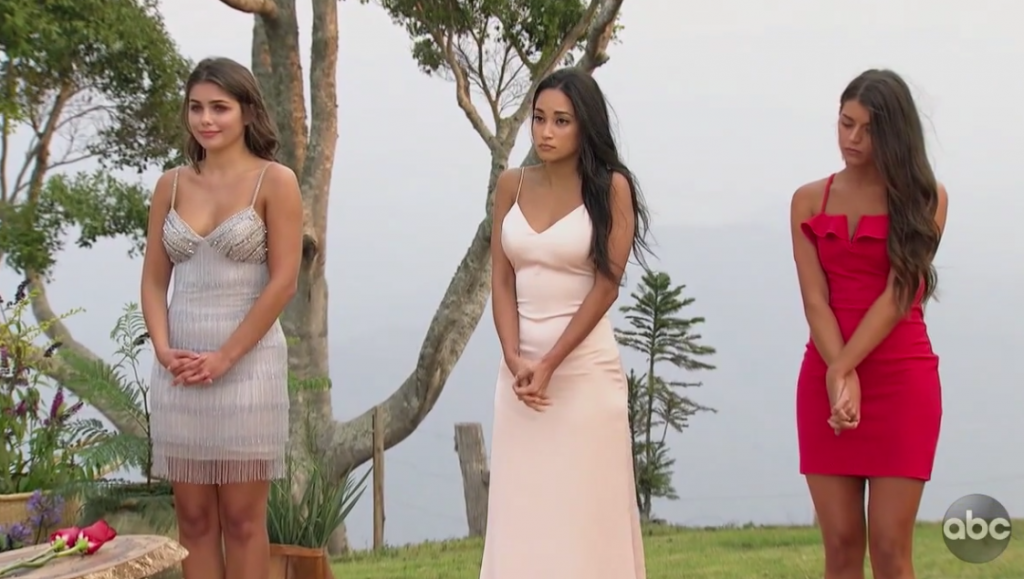 Peter was shaking and crying when he stood in front of the women who appeared to be at very real risk of contracting hypothermia. First, he gave a rose to Hannah Ann who looked like she was ready to start sobbing. Then – dramatic pause – the final rose went to Madison. Peter looked shocked when she accepted it and then he hugged her like a dying man. Meanwhile, Hannah Ann looked like someone was murdering her chance at love directly in front of her.

With that, Victoria is finally gone. Peter told her that everything he felt for her was real, but that he’s further along emotionally with the other relationships. Yeah, I heard that “emotionally” caveat too; Madison is going to love that. As for Victoria, she ended her journey in the most appropriate way possible saying, “I don’t know what to say. It is what it is.” Classic.

Finally the Women Tell All

The Women Tell All is one of my favorite events of the year. It’s right up there with Christmas morning and when it’s time to get botox again. Truly, what’s not to like about gathering 17 women from the season and watching them destroy each other? Then I remembered that everyone on this season is an infant.

It was torture. If I wanted to listen to a bunch of people scream at each other I’d take my airpods out and listen to my kids.

Everyone still hates Alayah who suddenly looks like one of Melania Trump’s doppelgängers. Tammy got meaner and meaner as the night went on. Kelsey cried and then cried some more when Ashley Iaconetti showed up and told her to keep crying. And Mykenna is probably still on the stage speaking in Pinterest quotes right this moment.

I’m still trying to forget I voluntarily watch this show.

A highlight was when Victoria P. told everyone that she only called Kelsey a pill-popper out of concern from a “medical standpoint.” Which led one of the other women to blurt out, “From a medical standpoint? You’re a dermatologist.”

Forget everything else I said, the Women Tell All is perfect.

Sometime between Victoria’s good-bye at the top of the episode and her appearance on the Women Tell All she was a brand new person. Who is this articulate, apologetic, and likable human? Stop it, I’m an enneagram 8 and don’t like my pre-conceived notions being questioned. For the record, she emphatically insists she didn’t break up any marriages. Hold up, did I just get excited to see her on Bachelor in Paradise?

You guys can’t trust me.

Peter arrived eventually and fielded a few softball questions, but he didn’t give us any good hints about what’s to come. His scar looks less Harry Potter-ish though, so there’s that.

After Peter escaped out the back door, Bachelorette Rachel Lindsay read The Bachelor‘s version of Jimmy Kimmel’s mean tweets. Only they weren’t funny at all. Instead she read racist DMs aloud to show everyone the hate the cast members get throughout the season. While this is an important topic to tackle I question their choice to make the only black bachelorette do the emotional work of tackling racism in Bachelor nation – again.

The main takeaway here is: don’t be a racist dick. That should be able to go unsaid, but ya know, America.

On that depressing note, the Women Tell All came to an end.

Next week is the finale of Peter’s journey on The Bachelor. It will be a two-night event starting on Monday 3/9 and ending on Tuesday 3/10. the scenes from next week are super dramatic and according to Bachelor overlord, Chris Harrison, “Not a single person who knows how Peter’s journey will end, not even Peter.”  Do you believe him? Let’s talk in the comments.

The Cool Table Has a Podcast Now!@thecool_table
1.0K Following 987 Followers
Who's watching with me? Gonna start at 1:00pm CST #HarryandMeghanNetflix https://t.co/Wz5n31uLCR
4 hours ago
3
@deannareads I'll go down with the ship that Bloodmarked didnt have a fair shake bc of its release date
4 hours ago
I made an aesthetic thing and it took a minute and it's doing TERRIBLY. LOL FOREVER https://t.co/7nYkJ9vMo0
4 hours ago
@baskinsuns @pagemelt I've never seen any good discussions or good insight come out of bookstagram. They almost alw… https://t.co/51anLn7rxo
4 hours ago
2
Can’t wait https://t.co/dMqJEWhOVR
6 hours ago
2
Archives
Entertainment, The Bachelor, TV