In this week’s episode of The Bachelorette in quarantine, 23 men remain in the quest to win Clare’s heart. Please pause for a moment of silence in honor of the 22 of them who aren’t named Dale Moss.

Buckle up for the wild ride that is Clare Crawley and her gaggle of age-inappropriate boy toys exploring their love languages, playing strip dodge ball, and fighting at a cocktail party.

Chris Harrison dropped off the first group date card of the season with the promise that Clare thinks her husband is in this group of men. Don’t get too excited 8 unimportant men and Dale, you’re just crashing what appears to be the set of a high school’s rendition of Romeo and Juliet. Think Clare in a faux brick tower surrounded by those fake plant fences I keep getting targeted advertising for Instagram.

Basically, this date had Dale shower Clare with the five love languages. For, “words of affirmation,” the men took turns telling Clare, who was perched in the aforementioned tower, how much they want to be there for her. Because there’s nothing Clare loves more than forced sincerity. Turns out that no one else needed to talk at all. Clare only has eyes, ears, nose, and lips for Dale and his very tiny ears.

Whoops, you know what wasn’t Dale? The first person to “steal” Clare at the after-party. That’s because no one stole her. They sat there in awkward silence until she guilted Bennet into pulling the short straw. Finally, our chance to witness Clare with her back up against the wall because nobody puts Clare in the corner. She stopped her conversation with Bennett and walked back to the unenthusiastic group to chastise them. Clare is a woman who knows what she wants and she wants to be wanted. She will not be embarrassed by a bunch of Instagram model rejects. Wait, no, that last part was me, not Clare. Now send home Yosef who called you crazy.

She gave the date rose to Riley with the giant biceps and the unfortunate name, but this game is rigged. Clare is already writing Mrs. Dale Moss in the diary.

Jason (31, Former NFL Lineman) got the first one-on-one date card, but instead of a single card, it was approximately 5 cards written single-spaced. Clare wanted Jason to write a letter to his younger self before their date. Why? Well, because Clare saw someone who struggles with vulnerability when she met him, so she’s going to push him to the brink of his sanity. On a first date. Hot. 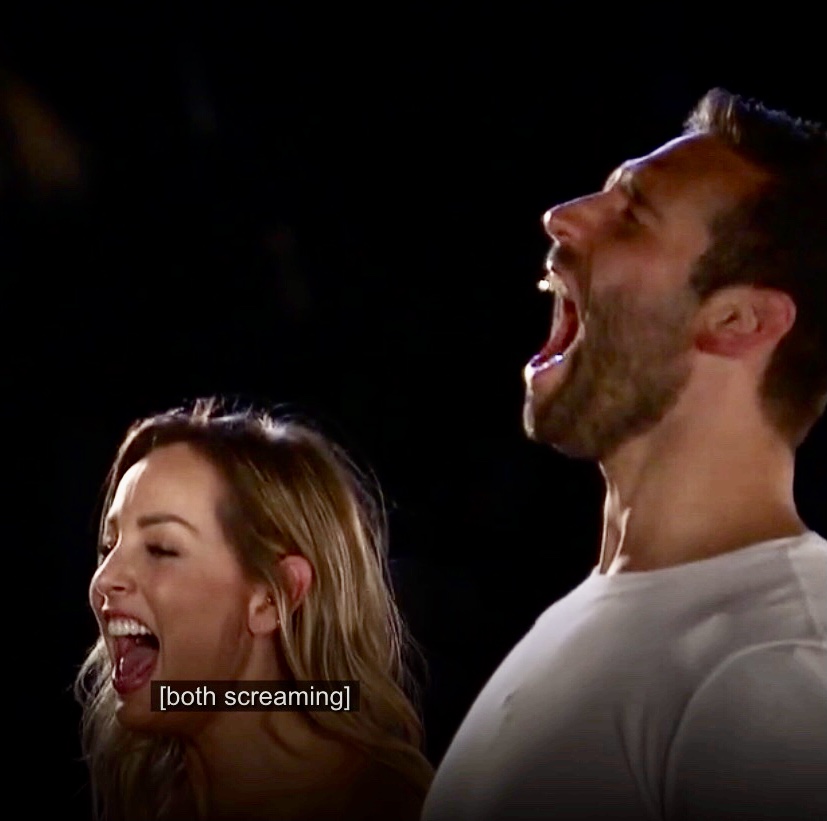 First, Clare and Jason wrote down all of the awful things people had ever said about them on tiles that they read aloud on national television and then broke on rocks. Then they read their incredibly vulnerable letters to their younger self to each other and they talked about their toxic actions in past relationships. Finally they kissed while Clare burned her finale dress from Juan Pablo’s season.

I never thought I’d miss a helicopter ride to Vegas so badly. Next time call your therapist.

Forget the election,* the real battle between red and blue was the second date of the night which featured a game of dodgeball. Wait, no, make that strip dodgeball.

Clare did keep saying that she wants a man with, “some balls,” but I could have gone with significantly fewer balls. The black censor box was doing some hefty lifting.

The red team sent home some very naked, very angry men from the blue team. I’m not listing all of their names because none of them are Dale and I can only care as much as Clare does, but one of them was bearded Blake. (Not to be mistaken with professional hair groomer, Blake.) I only mention bearded Blake because he crashed the after-party when his team lost.

But wait, there’s more, Clare asked a gorgeous man named Brandon why he wanted to meet her, but when he couldn’t come up with anything other than, “you’re hot,” she kicked him off the season. She has way higher standards than I do. In the end, Chasen (surfer, hot) got the group date rose, but again, none of these guys are Dale, so none of it matters.

If there’s one thing Clare Crawley knows how to do it’s how to ruin a perfectly good party by giving too much attention to one man. Thus, she gave bearded Blake a rose for “taking a risk” by crashing her date the night before. I’m sure that’ll go over well with the rest of the men. Blake, run for your life, she’s going to rip your heart out.

Then, she pulled out one of the blindfolds from the physical touch portion of the love language date and consensually assaulted Dale until the credits rolled.

At this point in a normal season of The Bachelorette I’d make predictions for the final two, but let’s not waste each other’s time here. Instead, come back next week to watch Clare’s men mutiny! I’m more excited than Clare seeing Dale in person for the first time.

The Cool Table@thecool_table
1.0K Following 1.0K Followers
Yesssssss https://t.co/rGaJC4TAJ4
1 hour ago
1
Latto Brought Big (Villain) Energy to #TheBachelor for episode two of Zach's season. https://t.co/qyqmqEZIpH
9 hours ago
1 4
@pagemelt I know nothing about them but it's a good assumption since the album is titled Dear Wormwood. I have so m… https://t.co/rXXSQbWwlG
11 hours ago
2
@pagemelt isnt the whole album based on the screwtape letters? RED FLAGs
11 hours ago
1
@MrsKowski unfortunately yes
11 hours ago
Archives
Book Club, Books, Bridgerton, Entertainment, Netflix, Romance