Finally, after two long years languishing in hotel conference rooms from New Mexico to Pennsylvania, The Bachelorette is traveling again!

Just like these 11 dudes fighting for Michelle’s affection, we’ll take what we can get.

Her Minnesotan roots are deeper than most Bachelorette’s desire to be on Dancing With the Stars.

If you think she’s going to end up with someone who doesn’t want to live in the Land of 10,000 Lakes, you’re wrong.

Someone get Joe or a Canadian who wants US citizenship in here stat.

Speaking of the DM ditching devil, Minnesota Joe got the first one-on-one date. Keeping in line with the home-field advantage angle, he and Michelle threw the first pitch at a Twins baseball game, visited her high school, and played basketball in her old gymnasium.

The nostalgia was strong.

I personally think kissing in a high school locker room sounds like Mono waiting to happen, but they probably have a protocol for that. 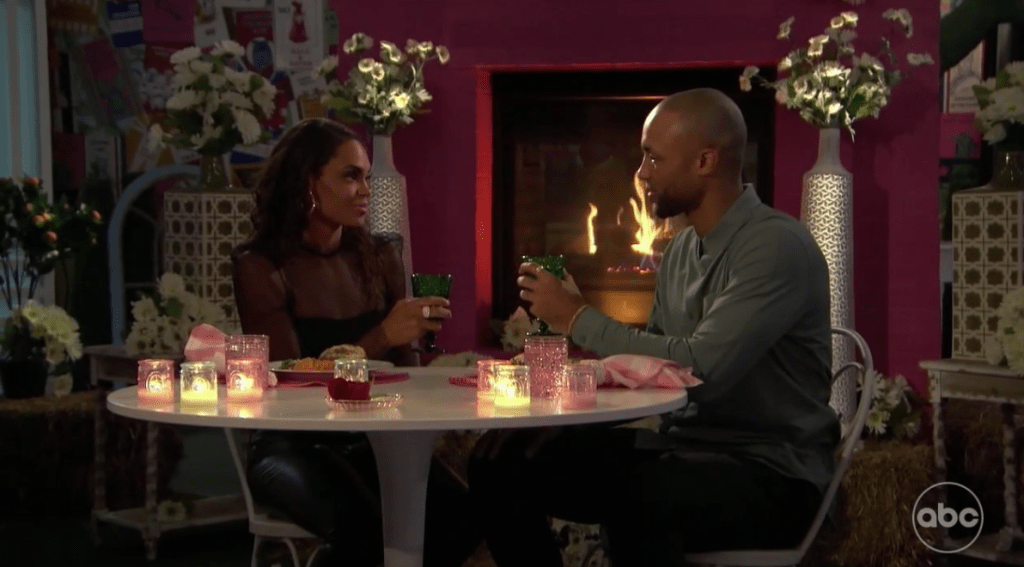 At dinner that night, Joe, who barely speaks on a good day, told her about the devastating injury that ended his basketball career and led to a mental health crisis.

Now, did I laugh that his injury was to his fifth metatarsal (AKA his pinky toe)? I did indeed, that ish is funny. But the laughing didn’t last long.

Anyone who had ever invested their whole life in a sport knows that it takes over their identity. When the sport ends, in an odd way, you end too. This was Joe’s experience that he battled through by returning home to his roots. You know…in Minnesota. 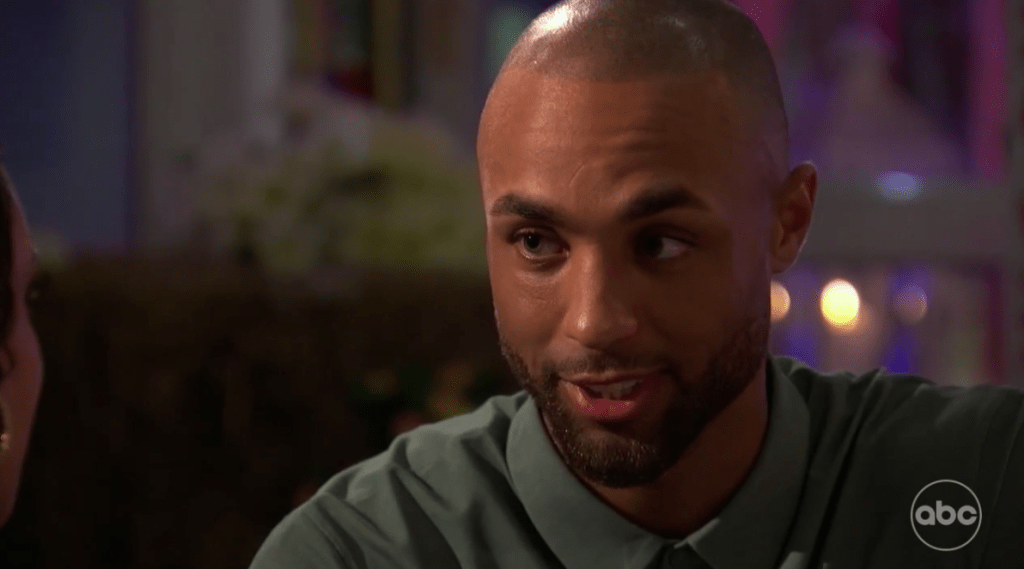 His story was important, but he could have said anything and she still would have loved it because Michelle said Joe reminded her of her dad.

Someone call the priest, these two are getting married.

Oh, and she said their date was the “most powerful, special, perfect, stars aligning date I’ve ever been on.” In fact, she said meeting Joe after living such similar lives felt like “two souls living side by side without even knowing it.”

I mean…if you check those DM’s he left on read he knew it, but I appreciate the sentiment.

He got the date rose (obviously). 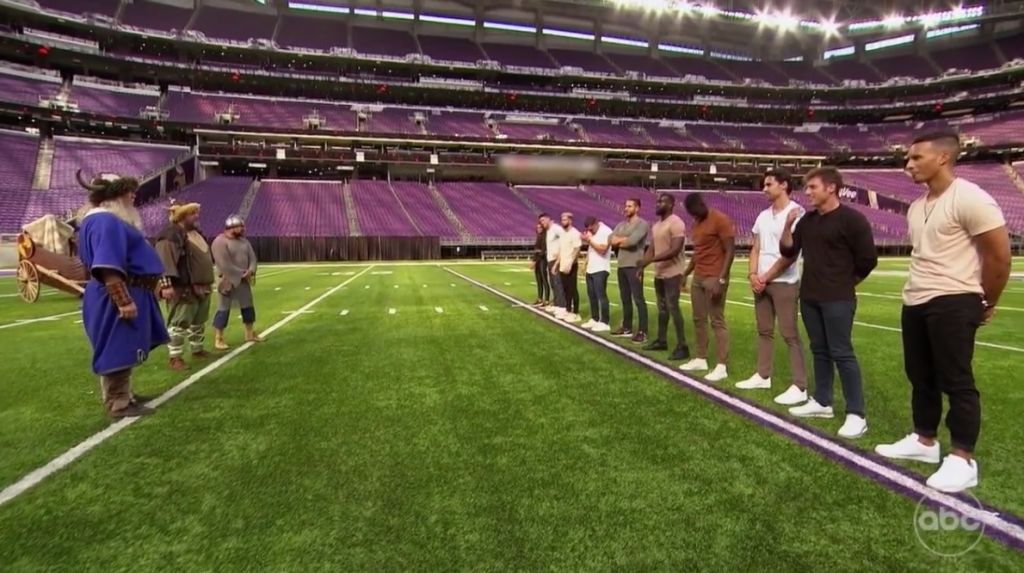 Michelle woke up feeling great the next morning after her date with Joe because she’s fully in love and everyone else is wasting their time.

Sounds like the perfect moment for a group date.

Nine men (Casey, Rodney, Martin, Olu, Chris, Brandon, Leroy, Rick, and Clayton) met at U.S. Bank Stadium expecting to meet some Vikings, and once again this show did not disappoint. 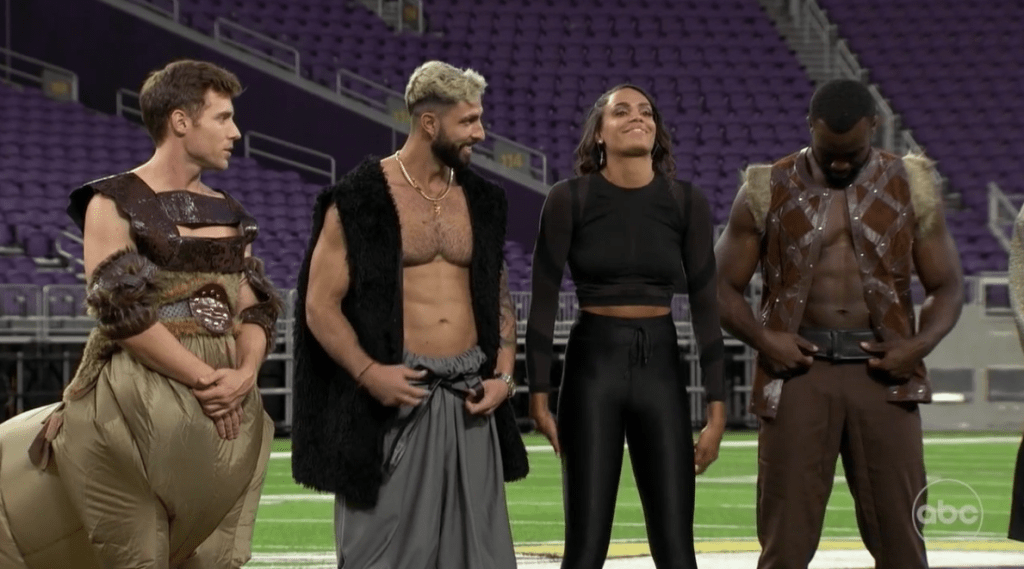 No seriously, they talked that annoying guy Chris from last week’s episode into dressing like a centaur.

It was television gold.

Naturally, the title of “Ultimate Viking” went to Clayton because he’s gigantic. That may be the singular most interesting thing we’ve learned about him in advance of his season of The Bachelor.

Chris’s Tightie Whities Are in a Bunch

At the after-party, each of the men worked extra hard to make connections with Michelle. None of them wanted to relive the nightmare that was the teddy bear fighting date last week.

Brandon sweet-talked her and got fed Swedish Fish candy.

You know, the usual. 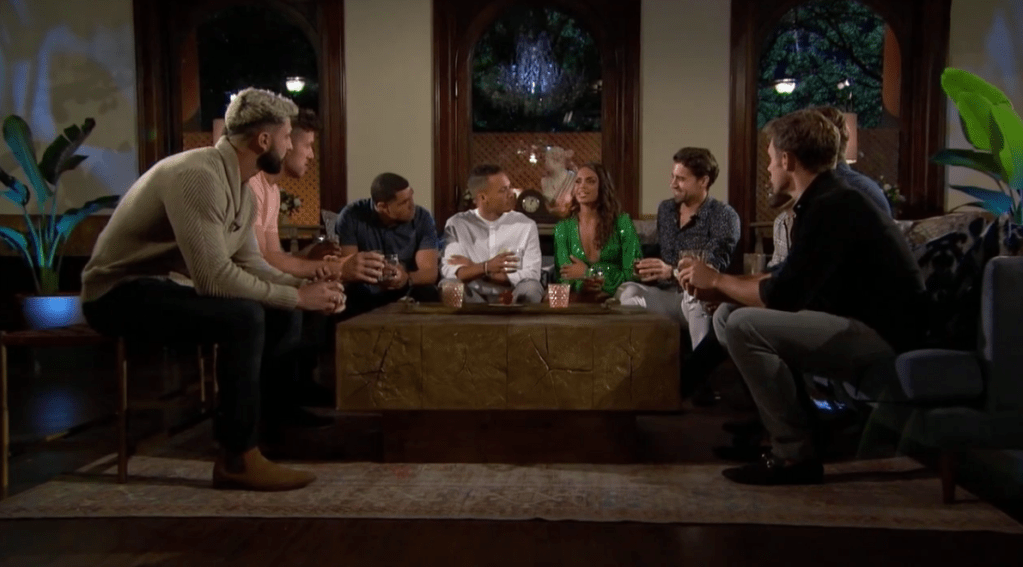 Everyone got their chance except for cry baby Chris who was mad at Michelle for not giving him the one-on-one date this week. He was mad because he felt like she owed him since he gave her the hot goss about Nayte last week.

Instead of talking to her directly, Chris mopped around the whole night and then was shocked when she ended the date without ever speaking or looking at him.

He was all “She’s not going to say thank you or check in with me?”

And Michelle was all, “Chris? I don’t know him.”

His little centaur head was ready to explode.

You love to see it.

Ultimately, the group date rose went to Ultimate Viking Clayton for reasons* only The Bachelor producers seem to know.

Remember how I said Michelle needs a Minnesotan (Joe) or a Canadian who wants citzenship? I was talking about Nayte. Those two are so clearly her frontrunners that it’s hardly a race anymore.

For their first one-on-one date, Michelle took Nayte on a party barge around Lake Minnetonka before her besties Tia and Allie crashed the boat. They played the role of the “bad reasons police” but by the end of it, Nayte had won them over too.

Then Michelle and Nayte jumped into the water to “let the lake purify them” but it looked like they got a little dirty instead. In the best way. 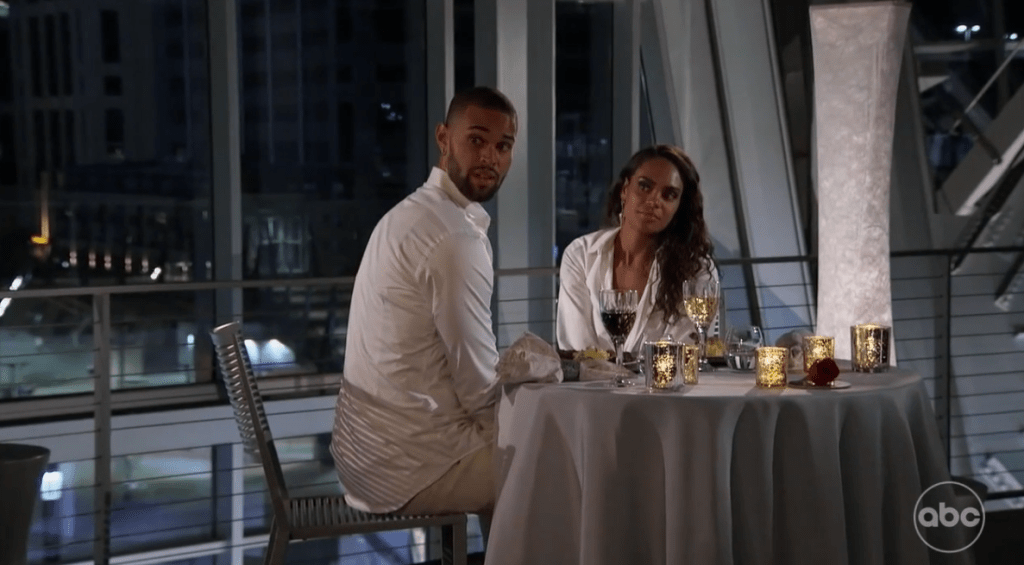 Dinner was going well that night with Nayte sharing that he never wants to lose himself in a relationship and Michelle agreeing. It turns out that she was once in such a toxic relationship that she became physically ill and unable to eat.

The irony that Chris crashed their dinner at that exact moment to speak to her is not lost on me.

Chris told Michelle that he had something important he needed to tell her. She scoffed and let him lead her away. Which left Nayte at their table giggling and saying “weird” under his breath. 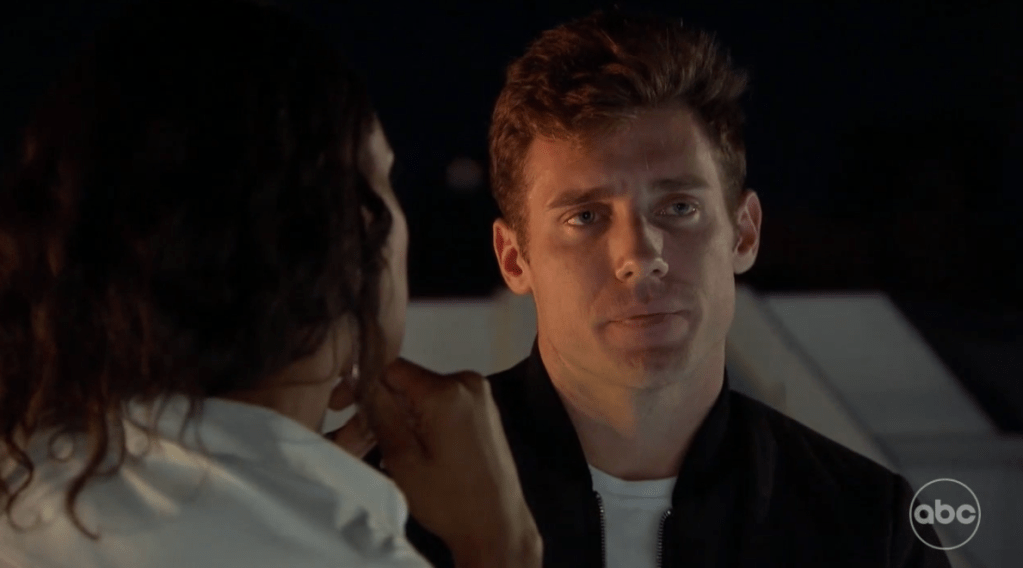 Chris did not, in fact, have anything important to tell her. He just wanted to shame her for her choices and accuse her of being fake. He told her that she disappointed him and played him.

He came across as mean, petty, and straight-up nasty for reasons I can only attribute to the confidence of a mediocre white man.

I’m not sure how he thought berating her was going to help his case, but don’t worry, Michelle can handle herself.

She looked at him with disdain and said that she wants “a man who will support me when I speak and not a man who is going to speak for me.”

Then she sent his ass home while Nayte got the date rose and literal fireworks.

And Then There Were Eight 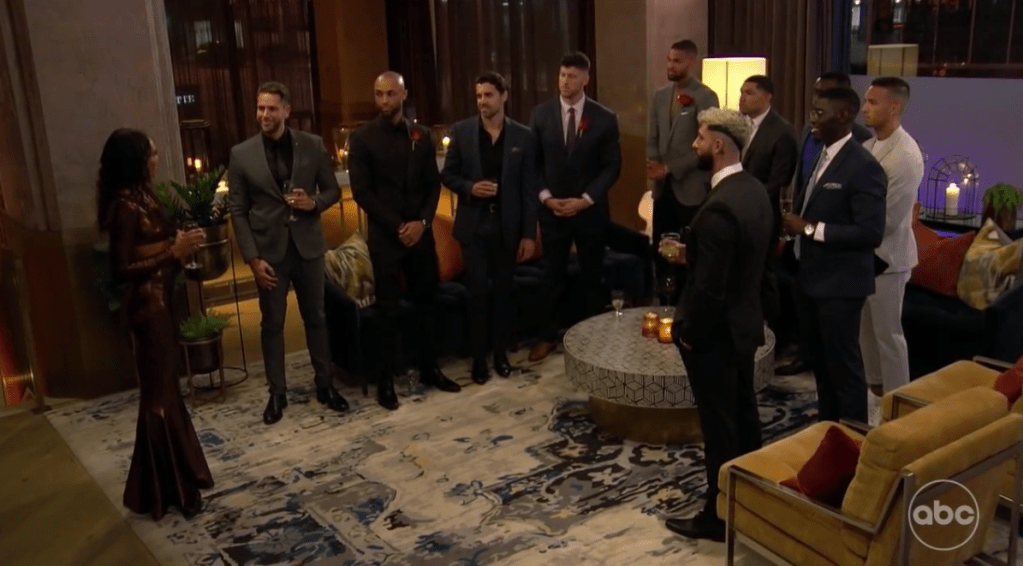 With Chris gone there wasn’t a lot of drama at the cocktail party.

Michelle danced with Rick in the streets of Minneapolis while what appeared to be an unpaid man played the piano.

Brandon got a birthday cake.

She and Rodney screamed “We love Minnesota!!!” from a rooftop.

Martin said something vaguely disrespectful about high-maintenance women in Miami. You know, the usual.

Ultimately none of that mattered, because they all got roses.

Instead, Dax Shephard-lookalike Casey and some dude named Leroy were sent home. 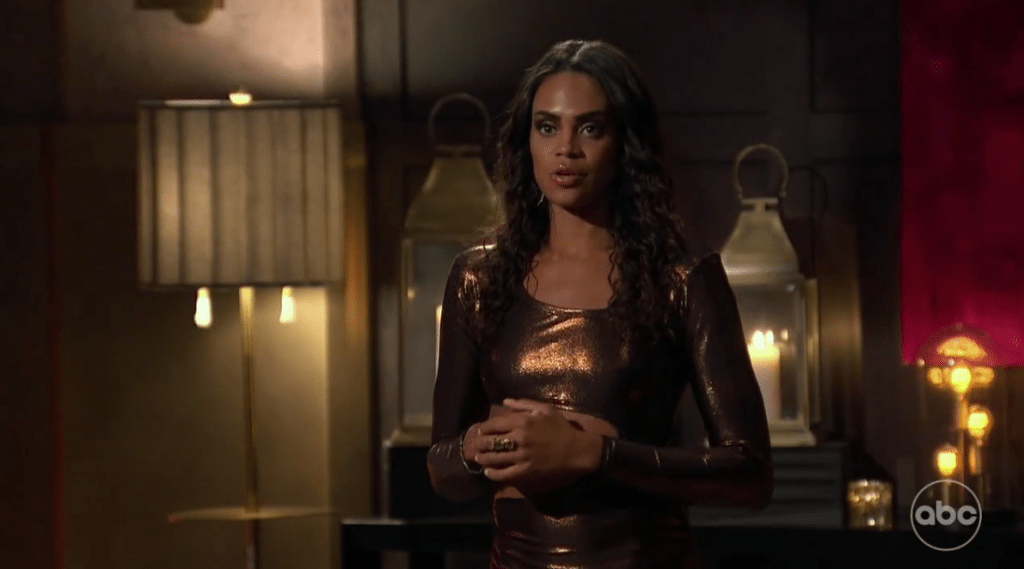 Next week we’re still stuck in Minnesota where it looks like Clayton will finally get the chance to convince us to like him. I mean, I like looking at him so we are off to an okay start. Are Joe and Nayte your final two or am I sleeping on someone?

The Cool Table@thecool_table
1.0K Following 1.0K Followers
Yesssssss https://t.co/rGaJC4TAJ4
7 mins ago
1
Latto Brought Big (Villain) Energy to #TheBachelor for episode two of Zach's season. https://t.co/qyqmqEZIpH
10 hours ago
1 4
@pagemelt I know nothing about them but it's a good assumption since the album is titled Dear Wormwood. I have so m… https://t.co/rXXSQbWwlG
12 hours ago
2
@pagemelt isnt the whole album based on the screwtape letters? RED FLAGs
12 hours ago
1
@MrsKowski unfortunately yes
12 hours ago
Archives
Entertainment, The Bachelor, TV