The Bachelorette Recap: Looking for Love in Minneapolis

What do the Bella Twins, Andy Grammer, Build-A-Bear, and 14 men between the ages of 26 and 36 with varying degrees of professional success have in common? They’re all clamoring for screentime on this week’s episode of The Bachelorette.

We are four weeks into Michelle Young’s journey to find love and things are about to get emotional.

No, not like, emotions of love. Emotions of stress. So much stress.

Michelle and her boyfriends were still feeling the effects of the dramatic Rose Ceremony from the night before but one-on-one dates wait for no man. Especially when the date is going to Martin, the personal trainer from Miami who has bleached hair, a nose ring, and oozes sex from his pores.

Listen, I had to drop out of honors chemistry my sophomore year of high school and attend regular chem with the plebeians, but even I recognize this for what it was: an explosive chemical reaction. 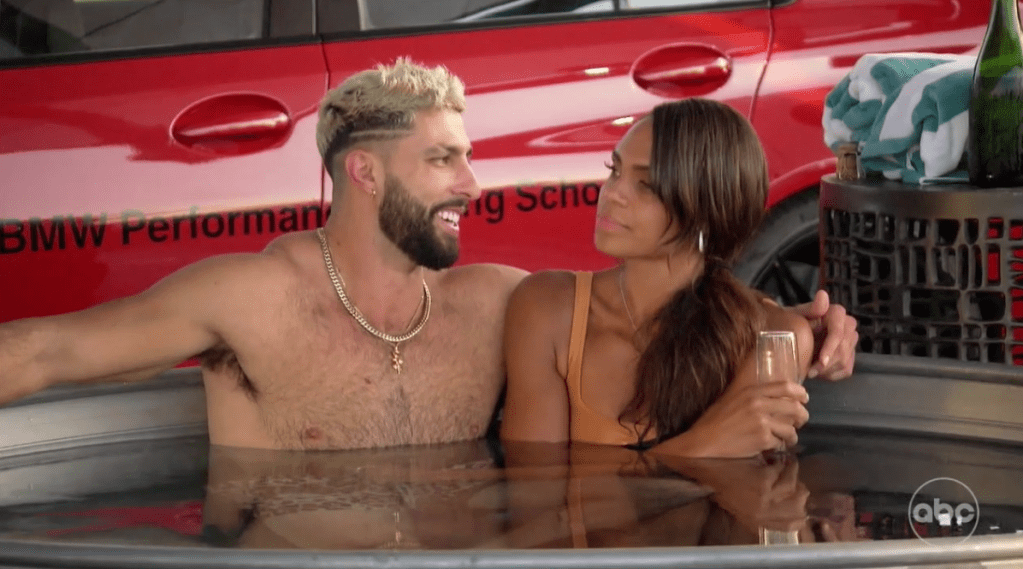 It didn’t matter if they were learning how to drift from someone’s dad at the BMW Performance Center or cooling off in a horse trough filled with tepid water. Michelle and Martin have that something special that everyone wants.

And by that I mean they want to tear each other’s clothes off. 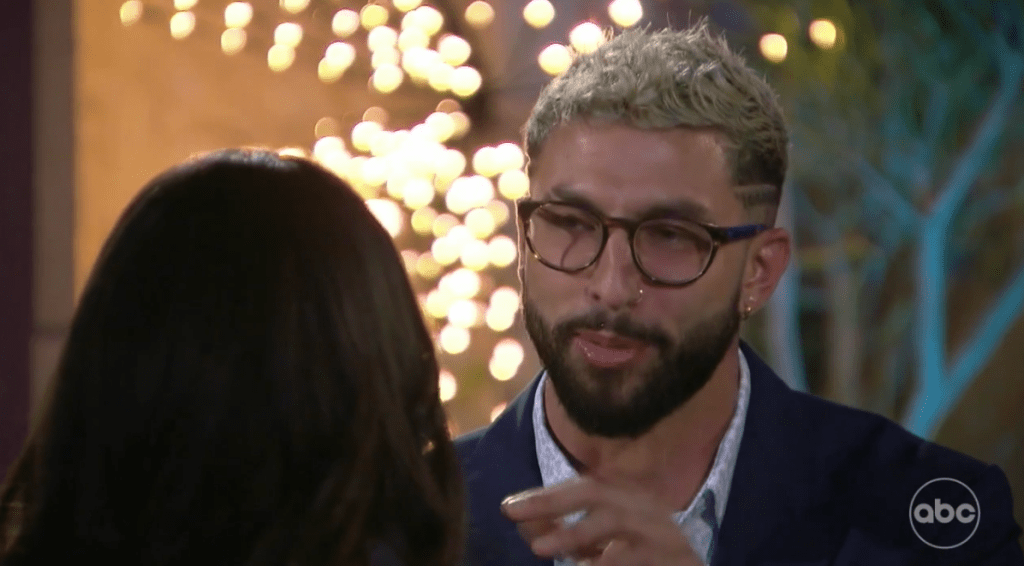 Things got testy when Martin defended his boy Jamie, but they worked things out at dinner that night. They both explained that they struggle sharing their emotions, but they’re willing to work on it together.

They were also willing to work their tongues into each other’s tonsils after he got the date rose.

Everyone loves a fixer-upper when he kisses like that.

Sleepover with the Bella Twins 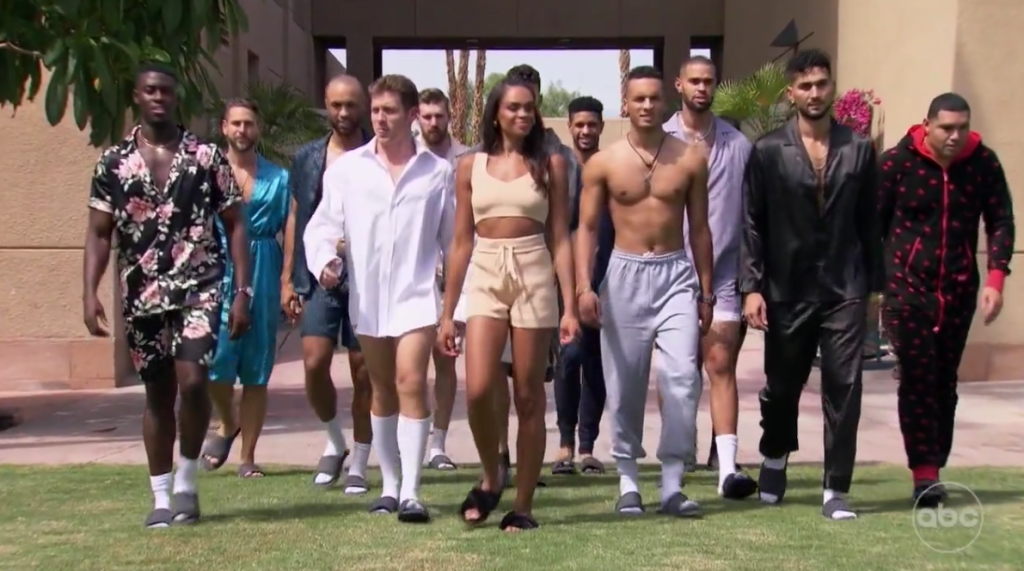 It turns out that there will only be one group date this week so we got stuck watching 12 of the men have a slumber party.

If you’ve ever attended a church youth group “lock-in” with a bunch of religious teenage boys, you know exactly what this date was like.

They dressed up in funny pajamas, ate junk food, played schoolyard games, hugged stuffed animals, got pedicures, and ignored the only eligible female in the room.

And she was triggered.

They were living their best lives. 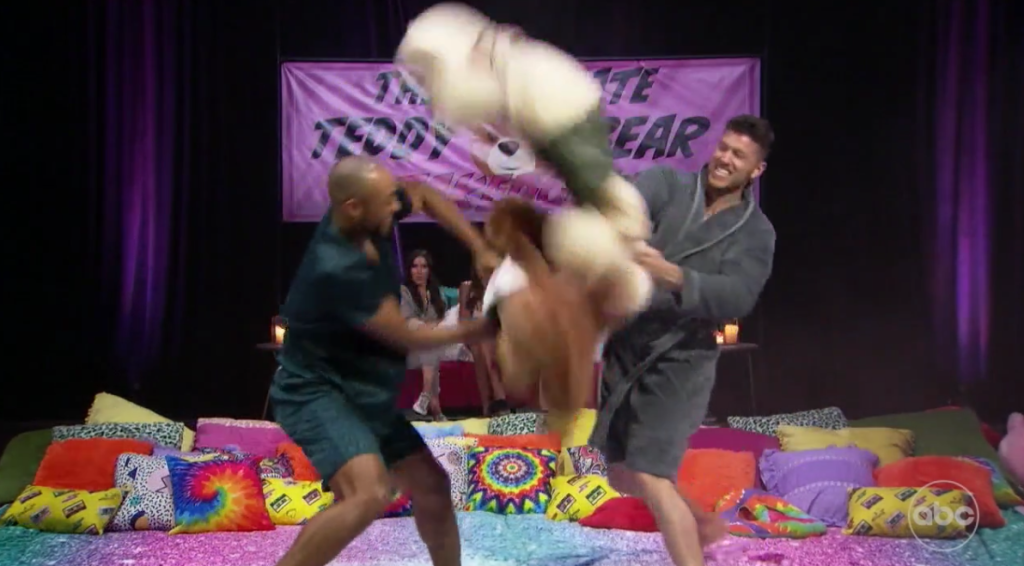 The Bella Twins of WWE infamy had these dudes wailing on each other with those giant Costco bears like it was open season on douchebags. It should have been television gold. But Michelle couldn’t muster a smile so the whole thing was a downer.

Ultimately, Michelle felt rejected, she felt unseen, and she was beyond the point in the season where she had the energy to fake it.

Seeing Olu shirtless for the first time barely got a second glance, so you know it was serious because that dude is jacked.

At the after-party, the 6 men who won the Ultimate Teddy Bear Takedown (Clayton, Nayte, Romeo, Casey, Olu, and Leroy) were excited to spend time with each other…I mean with Michelle. 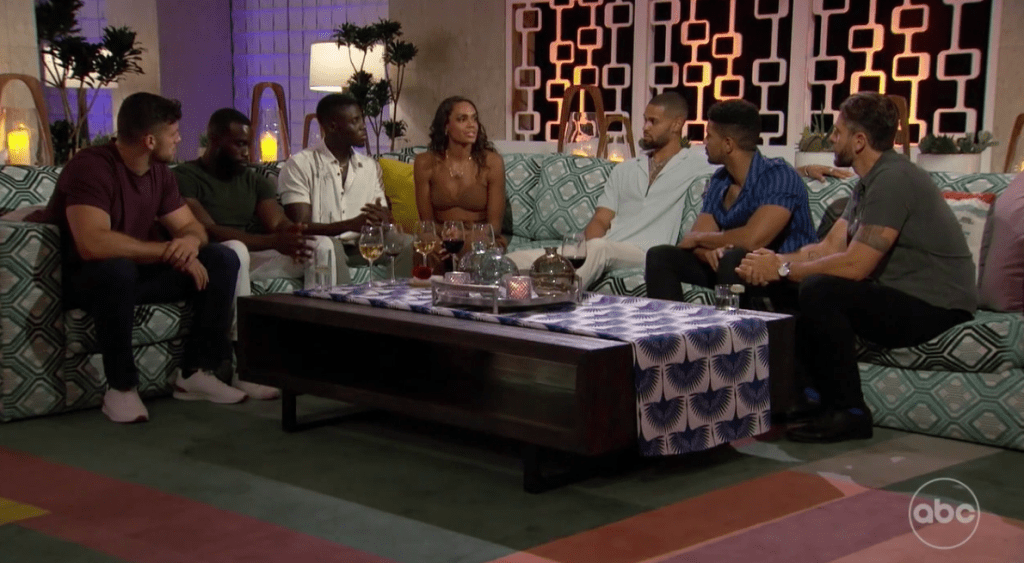 However, being as Michelle is a fully grown woman who has done the work, she didn’t come to play. She immediately told the men that she’s struggling, because, as she has previously explained, she never felt seen growing up. She felt like the “token Black girl” who was good for sports, and friendship, but not for love. Being ignored on the group date brought all of those feelings back up.

If you ever wanted to see some sheepish-looking dudes, this was your moment. 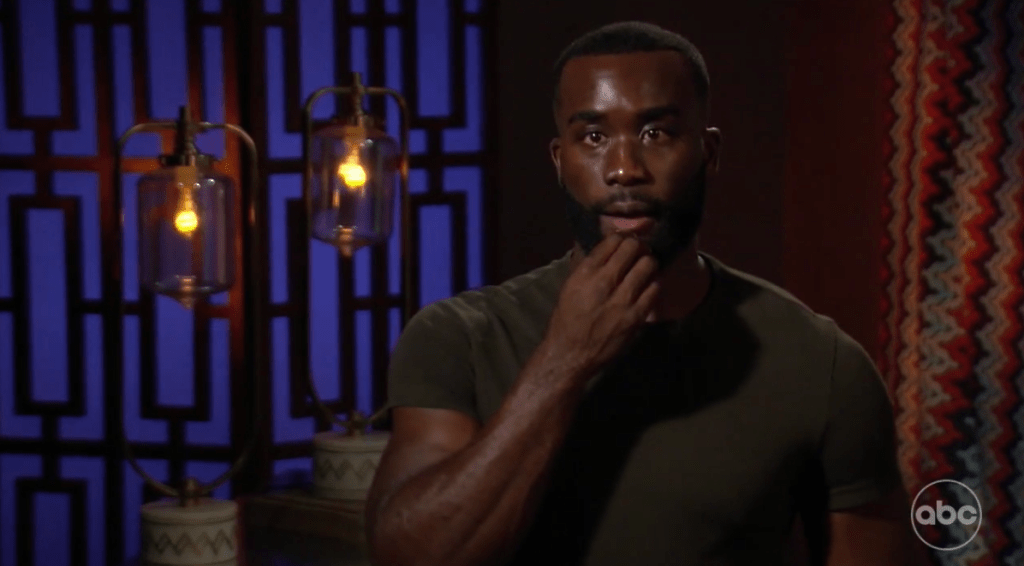 Each of them took the time to apologize, but it was Olu who tearfully related to her experience. He was able to empathize because he has seen firsthand the hurt and heartache his sisters (being Black women) felt growing up in white spaces. Finally, Michelle felt seen and the look on her face was pure relief.

Olu got the group date rose for his ability to relate to her and for looking that good shirtless.

The last date of the week went to lettuce-wrap Rick. You know, the medical sales rep from Los Angeles who arrived with his head on a dinner plate. 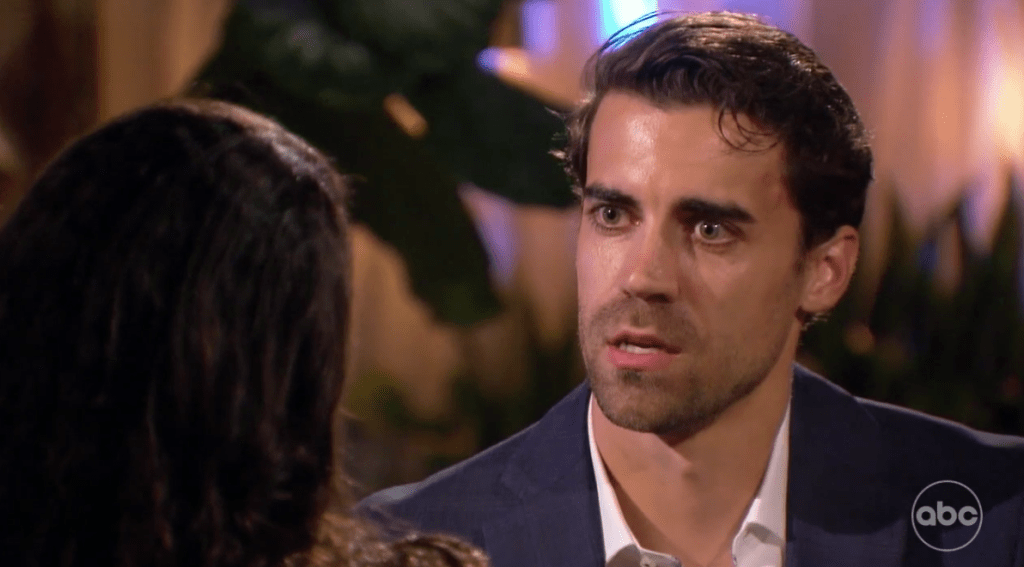 Not ringing a bell? Fine, he’s the one who looks like he’s wearing black eye-liner and is always whispering.

Michelle and Rick rode the Palm Springs tram and then smelled trees while on a hike in the mountains. At one point they found a box of wishes that they read through until they made their own wish about love because “it seems like we’ve both struggled with that.”

You’re on a reality TV dating show. That feels like a given.

At dinner that night, Rick whispered a story about his dad dying and the blame he places on himself, but it was basically impossible to hear. Then he told Michelle that he’s “looking forward to the moment when he can say he’s falling in love with her;” which if you break it down means absolutely nothing.

In the end, he got the date rose and they danced at a private concert by Andy Grammer.

Michelle said their date was peaceful. She meant boring.

Cockblock at the Cocktail Party

Everyone was gearing up for a good time at the cocktail party, but Chris S. woke up and chose chaos. 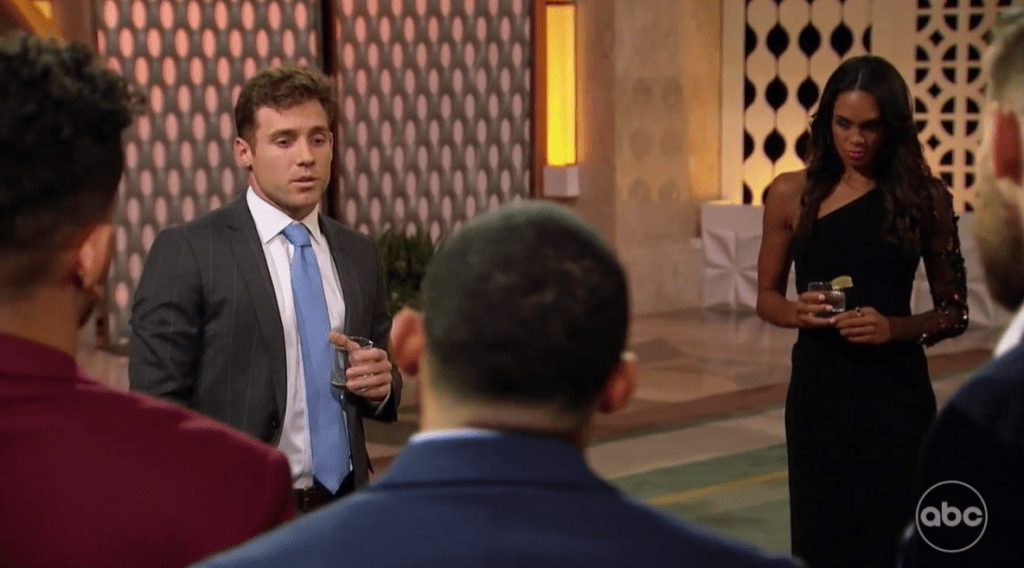 Chris S. is like that one guy from high school who grew up to sell State Farm insurance. You know the one I’m talking about. He’s about 5 foot 6 and half of that is his audacity. So when he looked around and realized that his days at Bachelorette summer camp were numbered, he decided to go nuclear.

Michelle walked into the room and before she could speak, Chris interrupted to chastise the men for not making her feel seen. He kept saying “you all” as if he was not also hugging his build-a-bear on the group date. 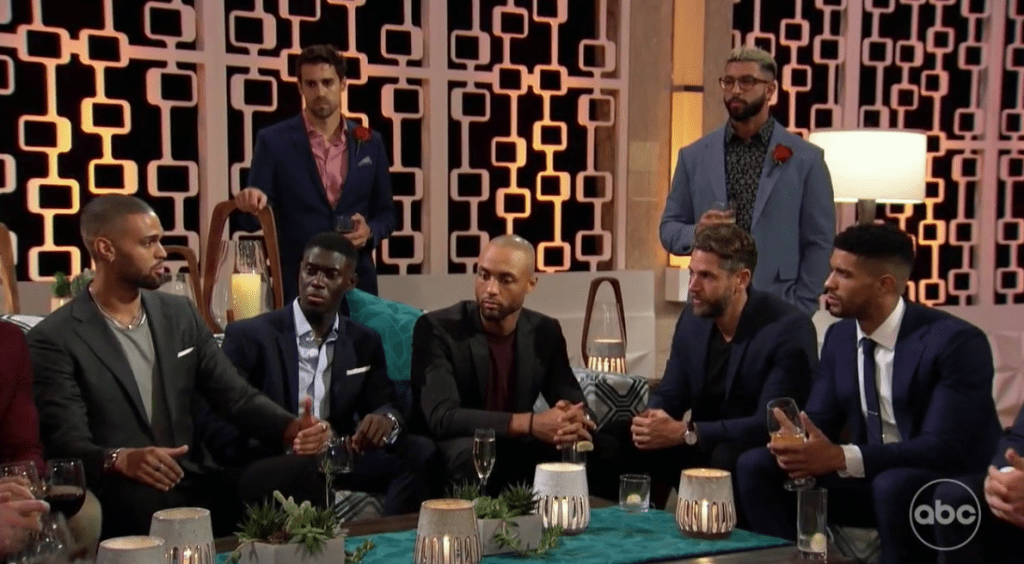 Basically, he told Michelle that some of the men (*cough* Nayte) think they’re shoo-ins for roses. Which…yeah…have you seen Nayte? He’s definitely a shoo-in.

But, Michelle is at that vulnerable stage of being The Bachelorette when the fun has worn off and she has lost all sense of space and time, so she kinda believed him.

Nayte was furious but his anger didn’t go any further than calling Chris a “dweeb.” Meanwhile, Chris kept saying that Michelle “probed and probed” him for answers and then accused Nayte of wanting to put his hands on him.

We hate a short king who uses micro-aggressions. 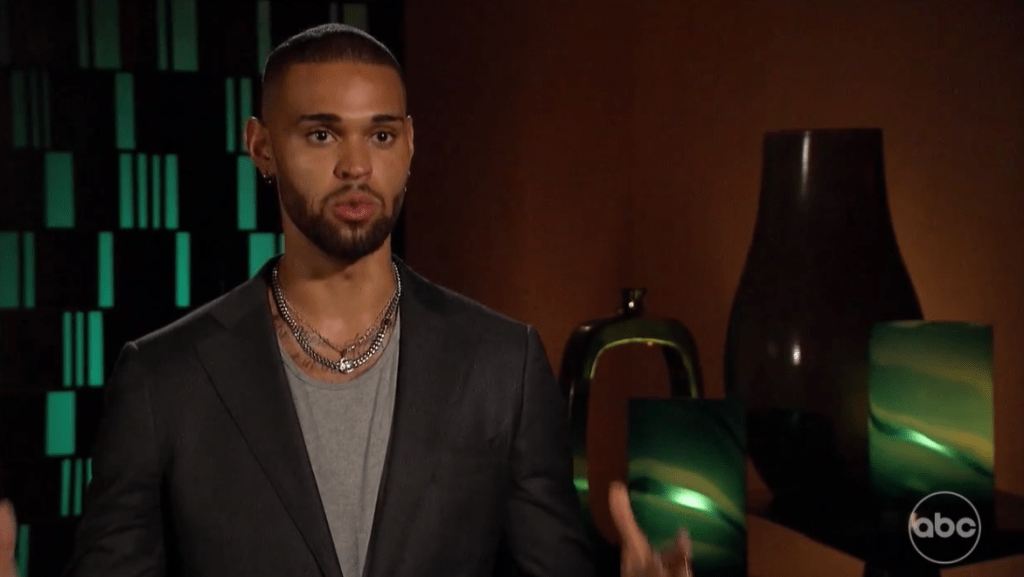 Somehow, despite all evidence to the contrary, Chris was feeling pretty smug and even likened himself to a knight coming in on a *white* horse to save Michelle.

Just putting it out there, but if anyone is thinking about “saving me” from Nayte, please don’t. 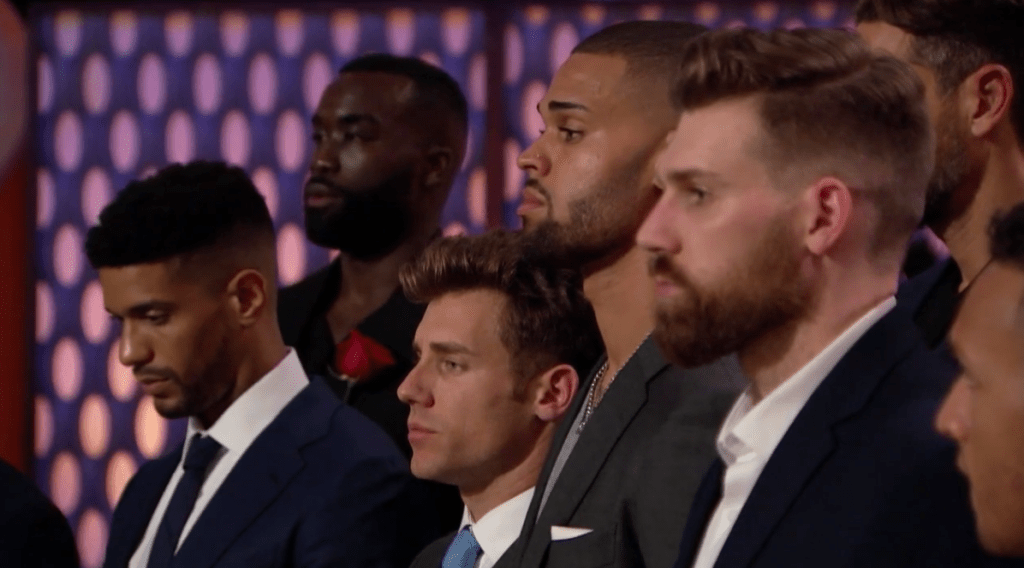 By the time the Rose Ceremony came around, everyone hated Chris S., but he was pretty confident that he was going to get a rose anyway. Which…isn’t that why he was mad at Nayte to begin with? I’m starting to think there are a few more inches to that story.

Cut to the men on risers and Michelle looking stressed as she handed out the roses one by one until 10 had been given out and one remained.

Let’s be real. It’s only episode four and this show is going to be boring as hell without someone to hate, so obviously, it went to Chris S.

I hope Nayte uses him as a free weight.

In the end, Chris G. the slam poet from Nova Scotia, Will the guy who cried over his bomber jacket, and Romeo the Harvard-educated mathemetician went home.

May they stay relevant long enough to get cast for Paradise.

Next week Michelle and her 10 boyfriends plus Chris are traveling to Minneapolis, Minnesota. It looks like Joe will get the home-field advantage and then a bunch of people start crying. It’s like sweet nectar from the gods.

The Cool Table@thecool_table
1.0K Following 1.0K Followers
RT @BlessAmysHeart: And @bethorne created a reading list/reference guide she mentions during the show. I say Beth is the brains, and I’m th…
15 hours ago
1
RT @BlessAmysHeart: Want to know what I believe now after leaving the #Evangelical church? Check out the latest episode of our #Exvangelica…
15 hours ago
2
@chels__ebooks if you can't HEAR and SEE it, you aren't fit to lick booktok's boots
19 hours ago
4
Archives
Books, HBO, Podcasts

The Bachelorette Recap: Looking for Love in Minneapolis