Here’s what we know as we enter week three of Michelle Young’s run as The Bachelorette:

There’s no way this episode can let us down. 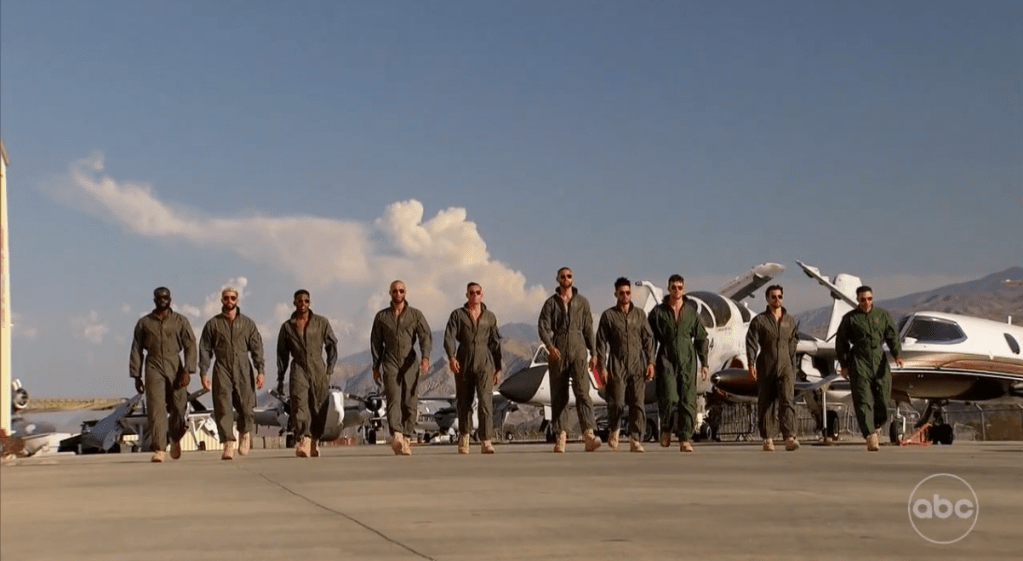 Hey look, we figured out how ABC is paying for that wardrobe upgrade. It’s with cross-promotion for the new Top Gun: Maverick movie.

After watching this entire group date, I only have one thing to say. How do you have ten men on a Top Gun-themed date and not make them sing “You’ve Lost that Lovin’ Feelin’?

For this date, Michelle took Martin, LT, Olu, Spencer, Clayton, Nayte, Joe, Rick, Will, and Peter to the Palm Springs Air Museum where they were greeted by two of the actors from the upcoming movie. I recognized Jay Ellis as Lawrence from Insecure, but I still have no idea where I’ve seen Glen Powell before. No offense to that man. 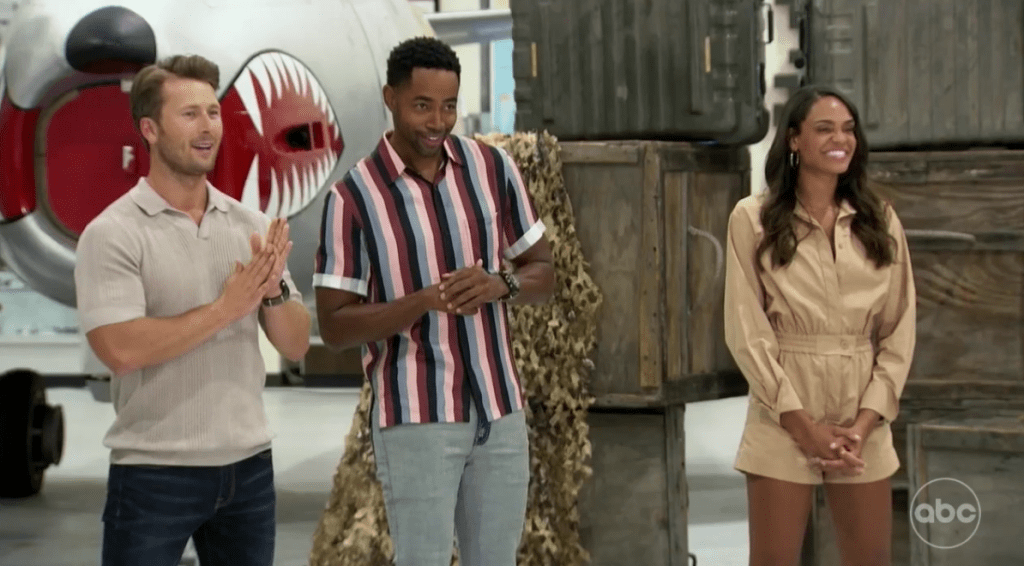 The men put on aviator jumpsuits and made up call signs for each other like “Little Willy” and “Dough Boy.” Then they competed in a push-up contest and fought with padded jousting sticks like kids at summer camp trying to get the attention of the cute lifeguard.

Little Willy, also known as Will, won the day’s competition for no reason other than that he managed not to puke on the g-force simulator.

What was his prize? Being driven in what I assume was a circle around the parking lot of the Palm Springs Air Museum in the porsche from the original movie…and a bomber jacket. Only one of those two things is going to be brought up again.

“I’m Sick of Going on Dates with Peter” 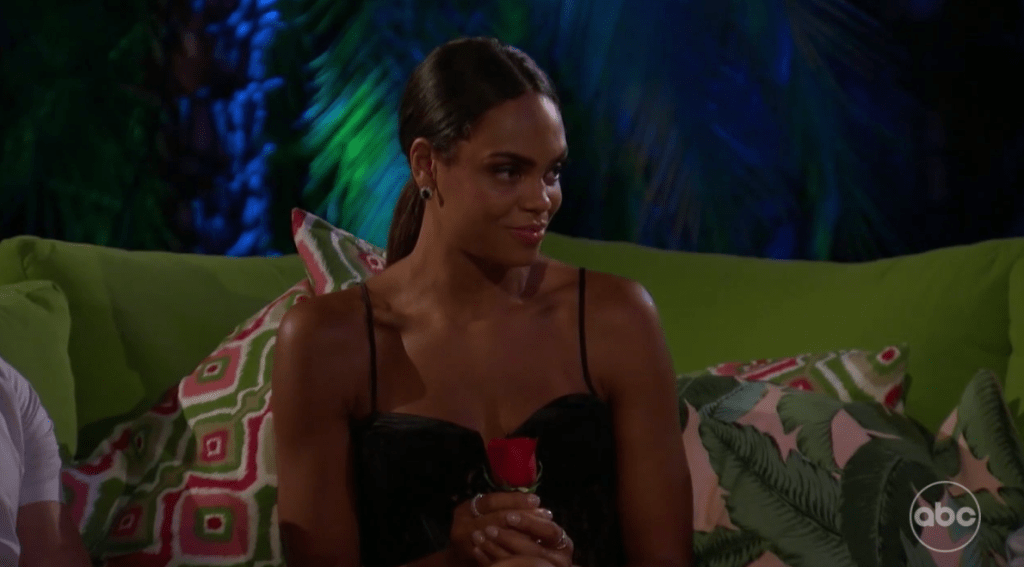 At the after party, Michelle continued to grow her connections with obvious front-runners Nayte and Joe. We also finally caught a glimpse of our future Bachelor, Clayton’s personality. I have no idea how they’re going to talk us into thinking he’s the most eligible bachelor in America before January, but they better hurry because they have some ground to make up.

Remember that prize of a bomber jacket from earlier? It’s about to earn its fifteen minutes of fame.

Peter was mad that Will spoke in spanish to Michelle on the date because Peter had spoken in Italian first. Apparently, there’s only room for one bilingual person on a date with 9 other men and one woman. So Peter threw Will’s bomber jacket in the pool.

Will was frustrated to the point of tears, but he appeared to keep Michelle out of the drama; even as he found himself fishing his jacket out of the pool. Ultimately, he didn’t want to ruin the night for Michelle. Peter would never.

Anyway, none of that matters because the date rose went to Martin with the bleached tips. Why? Oh, because he took the time to ask Michelle how she was doing during their date. If the bar was any lower it would be a speedbump.

Time for Someone to get Naked

Okay, so far we’ve had two minor celebrity guest appearances and drama on a group date, we should be right on schedule to see someone get naked.

Oh, yup, there it is. Rodney got the one-on-one date with Michelle which involved a game of truth or dare. Clearly, this was just a vehicle to make the poor man run around the hotel naked while Michelle and the rest of the cast cat-called him. In this the year of our lord 2021. 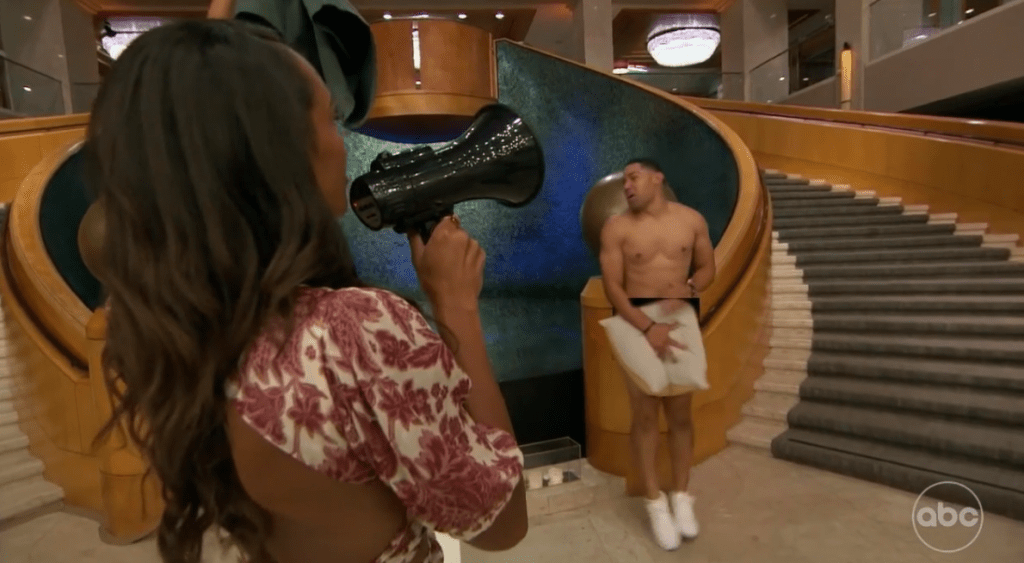 Anyway, Rodney is agreeable so he did the whole thing and the person who is in charge of putting the black censor boxes on this show gets to keep their health insurance.

That night, Michelle and Rodney rowed a boat across what I’m pretty sure was the hotel pool to eat dinner on a floating dock. They told each other about their upbringings (Rodney was raised by a single mom) and had a super chill date.

Michelle was into it because he got the date rose and they kissed in the boat like in that one scene from The Little Mermaid.

Between the bomber jacket and the boat, that pool has seen some things.

Some Poetry Shouldn’t Be Spoken

Chris G. the motivational speaker looked like he had died and gone to heaven.

The day’s task was for each man to tell a personal story through their own spoken word poem. Easy enough, right? Not for Jamie.

The rest of the men took the job seriously. They looked cute scribbling in their notebooks and performed surprisingly okay poems. But Jamie somehow lost his journal in the hour they filmed b-roll and ended up telling like an off-the-cuff fable about a girl getting lost in the woods.

Even Aesop would have a hard time finding the moral to that rambling word salad.

I don’t know where this guy finds the nerve, but could he please put it back, please?

The highlight of this date came from Michelle who performed a piece about being the token black girl. She was honest in a way I think a lot of Americans needed to hear.

Overall I give this date a 7/10 with 3 points subtracted for Jamie being Jamie.

Bad Vibes After the After Party

I’m just going to cut to the chase here and tell you that Brandon got the date rose. I did not see this kid coming, but suddenly I’m getting final four energy from Brandon. He’s super into our girl, and was giggling he was so deep into his feelings after the date.

Then Jamie ran off with a producer to bad mouth Michelle for “being on spring break mode.”

Someone hold me back. This man wants to die.

We’re Never Going to Make it Through a Cocktail Party

There were still 40 minutes left in the episode when the cocktail party started so we knew the drama was going to be good. And by drama I mean Jamie was going to firmly insert his foot into his own mouth.

First, though, allow me to reiterate that Nayte and Michelle are end game. Michelle literally bites her lip when she looks at him. He gets all shy and happy to see her. She took her shoes off and pretended to run away with him. It’s like Disney levels of cuteness.

Okay, enough of that, bring on Jamie’s demise.

Rick Gets the Tea

Rick, the man who placed his head on a dinner plate on night one, got the ball rolling by telling Michelle that he knows all of the men very well and none of them have questioned her character like she was told.

Michelle was like, “Yo, that is not what Jamie said,” and then Rick ran to tell the other guys that he had found the rat.

Okay, to be fair, Rick was super considerate considering the circumstances, but it’s more fun the way I tell it.

Rick and a couple of the guys were starting to get worked up when Michelle’s favorite boyfriend Nayte suggested that they needed to talk to Jamie directly. That’s the kind of advice that gets you an introduction to meet Neil Lane, Nayte.

Too bad talking to Jamie is like talking to a preschooler trying to come up with a lie on the spot.

Jamie was like, “ummm (cough) ummm, well…you see…it wasn’t exactly a live human being who told me anything about Michelle it was more like an undercurrent that was creating a monster, and yeah, any other questions?”

Yeah, bro. They have questions.

The other men wore a wide range of WTF expressions on their faces as they asked Jamie to further explain himself.

In fact, he avoided their questions so obviously that it was like he was a boxer ducking and weaving on fight night. But not like a real boxer. More like one of those guys you’d find outside the arena on the street who is punching himself in the face.

Then came our queen Michelle with the knockout.

Michelle Does Not Play 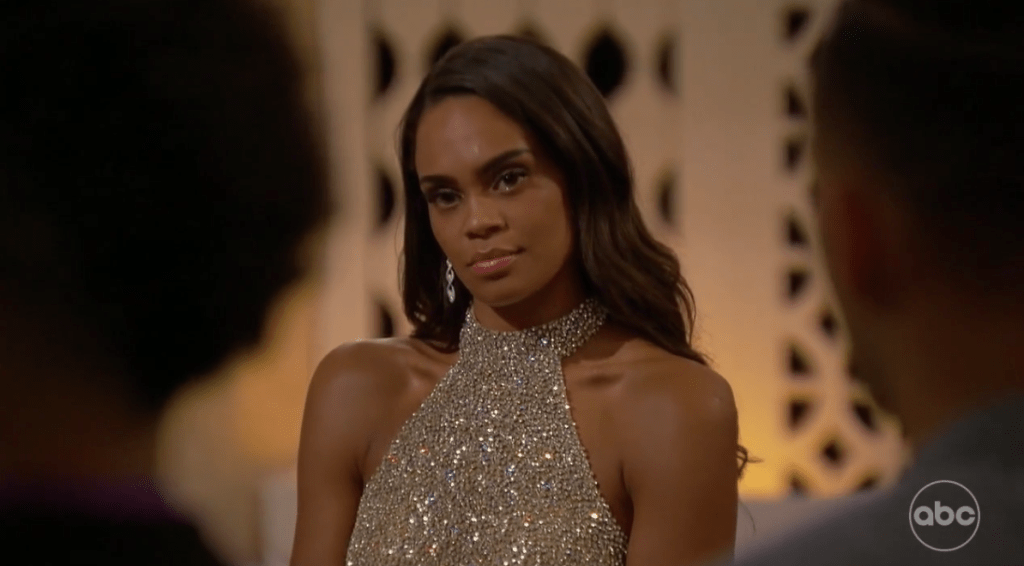 Michelle walked into the room and immediately noticed the tension. So she did what any experienced teacher does and gave everyone her teacher eyes and waited for one of them to break. Works every time.

For once in his life, Jamie spoke first, but it didn’t help his case.

He told Michelle that he never mentioned a specific person as the one who was questioning her character. In fact it was that monster he made up on the spot when he was talking to the guys. Right, Michelle? Right?! RIGHT?!?!

That man was spinning like one of my kids after gorging on Halloween candy this week. There was no stopping him until he made one of us sick. 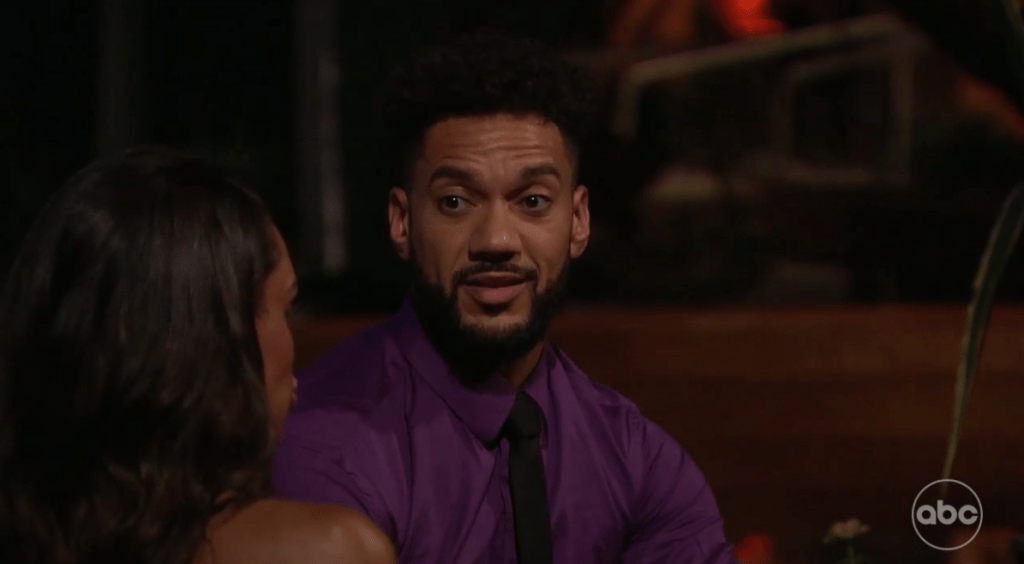 Michelle kept her cool demeanor the entire time. She listened to him intently, looked him in the eye, and asked, “Do you realize what actually happened?”

It was so calm and cold that I would have cried and told her all of my secrets if it had been directed at me.

And then she sent him home with little to no fanfare.

There’s the decisive and direct Bachelorette we deserved this year. 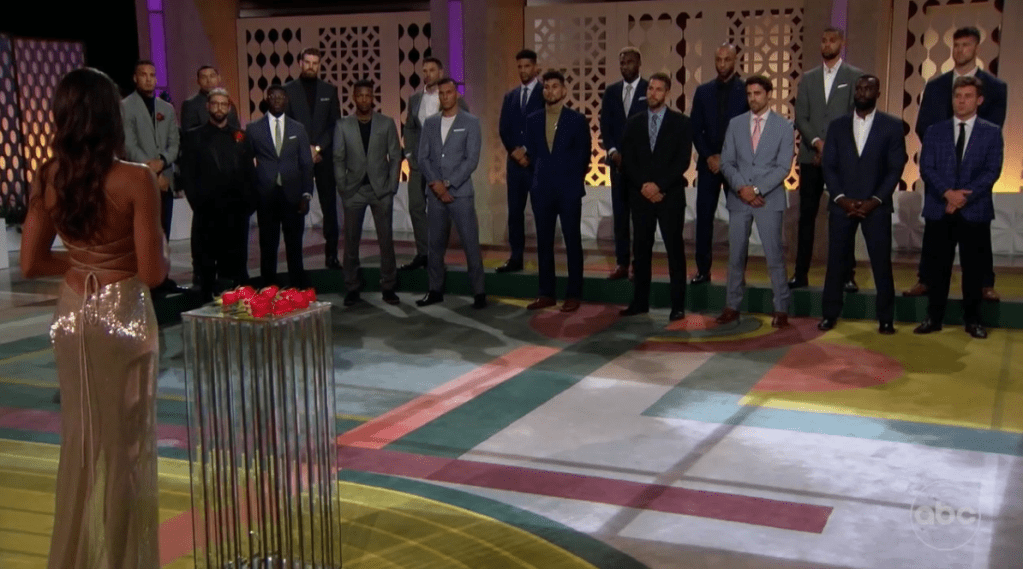 With Jamie cleared from the roster there were 18 men when the rose ceremony began.

Michelle gave a speech reiterating that she’s looking for her soulmate and her soulmate wouldn’t cause unnecessary drama in her life by lying to her. Nayte’s face was like, “Yeah, obviously I’d never.”

Then she sent home aggro Peter, Spencer, LT, and Mollique.

Fourteen men remain on the season. Is it just me, or are they flying out of this hotel as fast as Rodney running those stairs naked?

Come back next week when it looks like Rick will get a date and Chris S. will start some drama. Sounds boring, but at this rate I’d trust Michelle with my children so she can have my Tuesday nights forever as far as I’m concerned.

The Cool Table@thecool_table
1.0K Following 1.0K Followers
RT @BlessAmysHeart: And @bethorne created a reading list/reference guide she mentions during the show. I say Beth is the brains, and I’m th…
15 hours ago
1
RT @BlessAmysHeart: Want to know what I believe now after leaving the #Evangelical church? Check out the latest episode of our #Exvangelica…
15 hours ago
2
@chels__ebooks if you can't HEAR and SEE it, you aren't fit to lick booktok's boots
19 hours ago
4
Archives
HBO, Podcast, The Cool Table