Earlier this week, Katie Thurston and Blake Moynes broke up after getting engaged on our televisions like three months ago. So Michelle Young better fall in love in a hurry because my time is valuable.

Just kidding, what else would I do on Tuesday night? Go to bed without scrolling through Bachelor memes until 1 am? 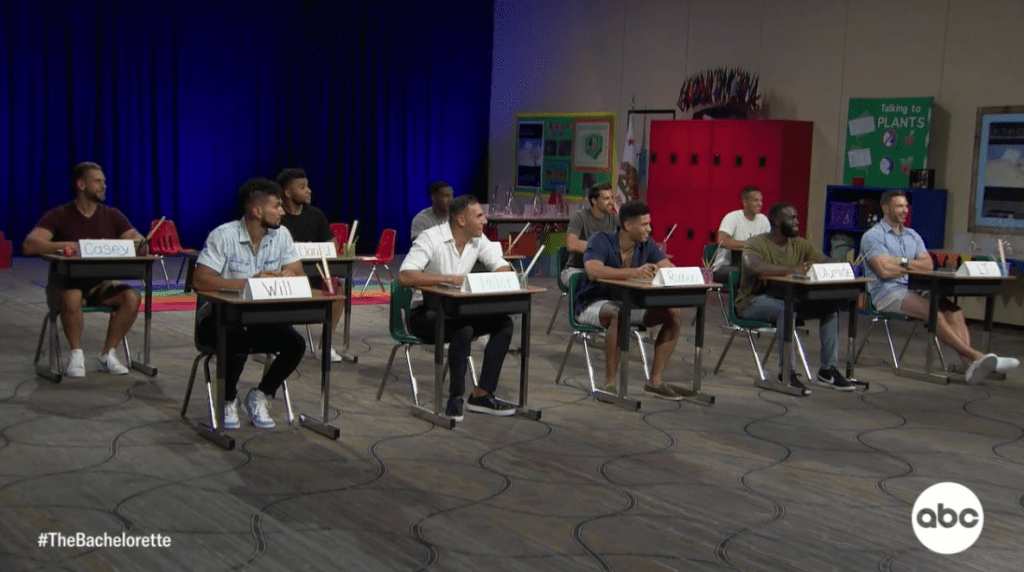 There are 23 men remaining in the race to be Michelle’s one-on-one partner so it’s time to divide and conquer. When I say “divide” I mean literal mathematics.

Ten of her boyfriends (Brandon, Romeo, Rick, PJ, Will, Olu, Casey, Daniel, LT, and Peter) got tested in primary school math, chemistry, and spelling on a group date hosted by three fifth graders.

I have a child in fifth-grade. I can think of nothing that would breed less romance.

This date served two purposes. One, it’s hilarious to watch 10-year-olds roast grown men. Two, it creates immediate tension in the cast when they make mistakes and get embarrassed. Thus creating space for us, and Michelle, to see how they react to adversity.

Should anyone care that Brandon can’t spell or that he can’t draw the infinity sign without it looking like the number 8? No, spellcheck exists for a reason and he’s earnest like a puppy.

Should we care that Peter got super aggro over a game of musical chairs and looked like his face was going to explode when Will jokingly wrote “Peter” as the correct spelling for “narcissist”? I mean…I’m not a clinical psychologist, but I am a Leo and that flag is definitely on the red side.

They all got participation awards in the form of ribbons that said “I tried” and the judgment of those three fifth graders.

That night, Michelle Young and her ten dates sat near a cabana set up on what appeared to be a fake beach. What is this, Hurricane Harbor? I know there’s a lot of sand in Indian Wells, but we all know you’re at the Marriott, stop playing. 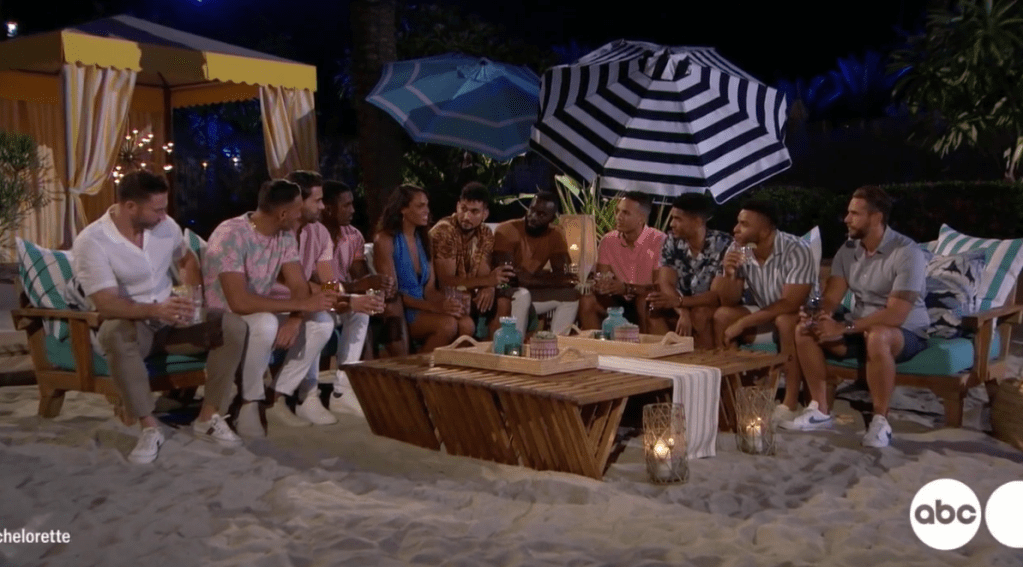 Anyway, they had their after-party. Michelle talked to each of the men and kissed a handful of them, but the fun part came from Narcissist. I mean, Peter. Sorry, that’s a common misspelling around here.

Peter asked Will if they could chat and then the two men had one of the funniest arguments I’ve ever heard. At one point Will – who was wearing a tiger print shirt – yelled, “It’s always pizza this, pizza that with you. What else do you have to offer besides a slice, bro?”

Give this show an Emmy.

In the end, Michelle gave the date rose to Brandon. You know, the guy who can’t spell or draw an infinity sign but can laugh at himself. Because that’s what this date was actually about, , Peter.

The first one-on-one date of the season went to Jamie a 32-year-old Biotech CEO from San Diego. This choice could come as a surprise, but I had Jamie in my top four after week one introductions because he and Michelle had good chemistry.

Michelle and Jamie drove a Jeep to Joshua Tree where they rock climbed a surprisingly difficult-looking mountain and made out on the summit. He was encouraging and kind the whole day and they had a gentle connection that seemed to bring out a softer side of Michelle.

That was the only thing soft about her on this date though because, damn can she wear spandex.

After they changed out of their rock climbing gear they ignored their food over dinner where Jamie shared the heartbreaking story of his childhood.

His mom suffered greatly from mental illness which she eventually succumbed to when Jamie was only 24. The way he spoke about being in class and wondering if that day would be the day his mom died by suicide was heartbreaking. Hearing the way he spoke about the kind of man it made him today was inspiring. 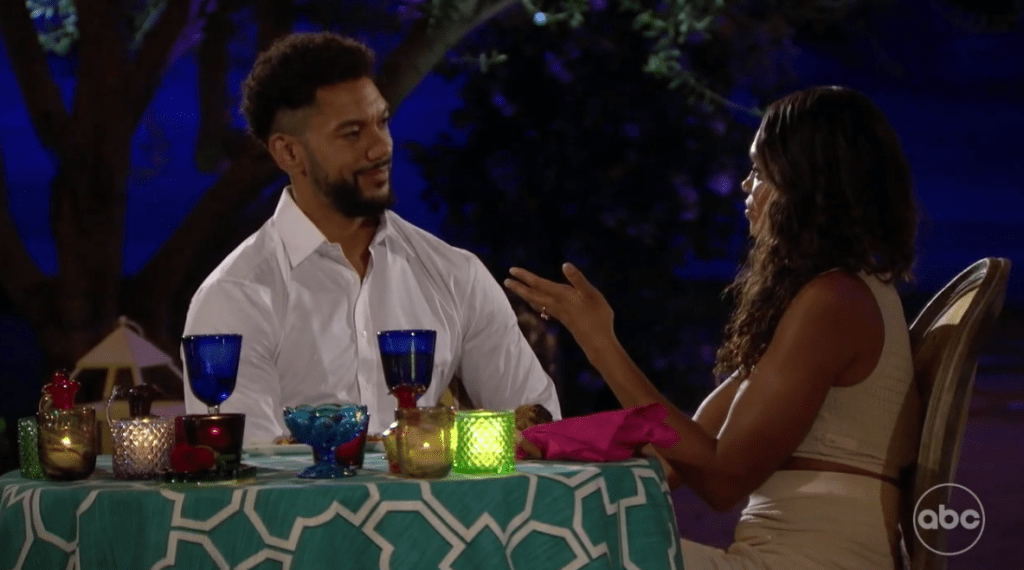 Michelle likes Jamie but she also respects him. He got the rose and then they danced at a private concert by someone named Caroline Jones.

IDK it was another white girl singing in a sparkly dress. This franchise tosses those around on these shows like they’re confetti.

And they thought misspelling was embarrassing.

Listen, this date was all about Mr. Minnesota Joe. The rest of these dudes could have packed it in and gone home because based on the way Michelle’s eyes followed Joe on the court, he played that whole game by himself.

They weren’t even trying to hide it.

Six is a Crowd

There were six men invited to the after-party but only Joe and Nayte mattered.

Joe, because Michelle spent like half the night talking to him about their connection and being sucked into his eyes like a moth to a flame.

Nayte because he’s a confident-ass dude who isn’t pressed by what anyone else is doing.

Also, those two kissed her approximately 90% of the time they were on screen.

The date rose could have gone to either man, but since Nayte was the first impression rose recipient last week, it makes sense that Joe got the date rose this week.

Meanwhile, the other four men on the date sat around wondering if Michelle realized they existed.

Being a D*ck at the Cocktail Party 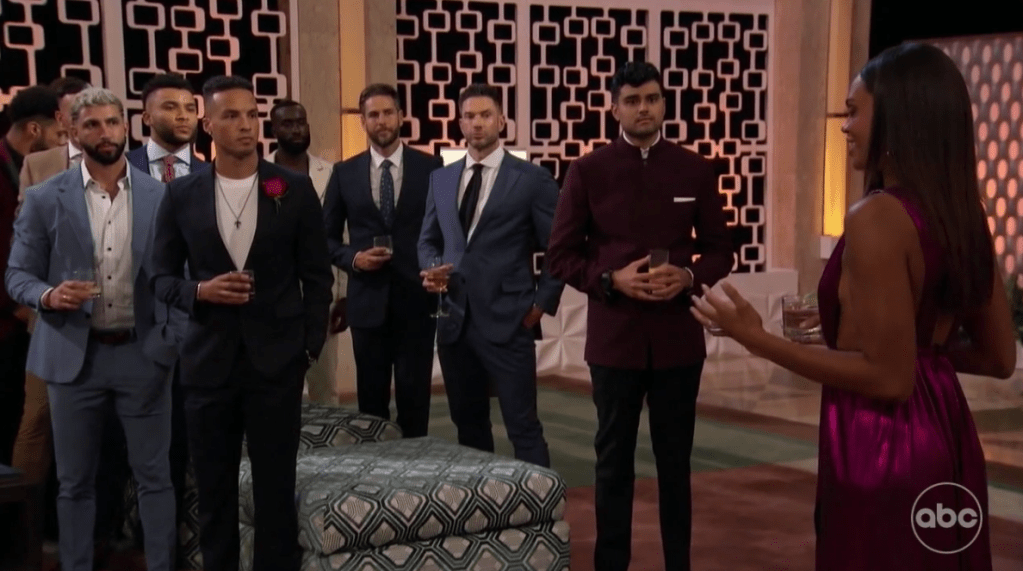 Michelle Young’s evening started out well with her feeding a blindfolded Rodney different types of apples while he failed to pick out the granny smith.

Then Jamie let the power of his date rose go to his head.

A couple of the dudes from the basketball date were getting a little suspicious that Michelle and Joe knew each other previously. You know, because they’re both Minnesota basketball stars who are obsessed with one another.

When they mentioned this to Jamie, he ran with it.

Suddenly he was convinced that he was being conned. Clearly, Michelle wasn’t being honest or giving them all the same chance, right?

Oh and what about that “friend” he suddenly had from Minnesota who claimed he knew Michelle was “booed up with a light skinned man”? Super sus.

He tried to get the men to rally around him, but when he realized they didn’t care, he just lied instead.

He took Michelle aside and told her that everyone (not him!) was saying that she knew Joe (but he didn’t care!) and the men (but not him, of course!) were starting to question her intentions (but he would never!). 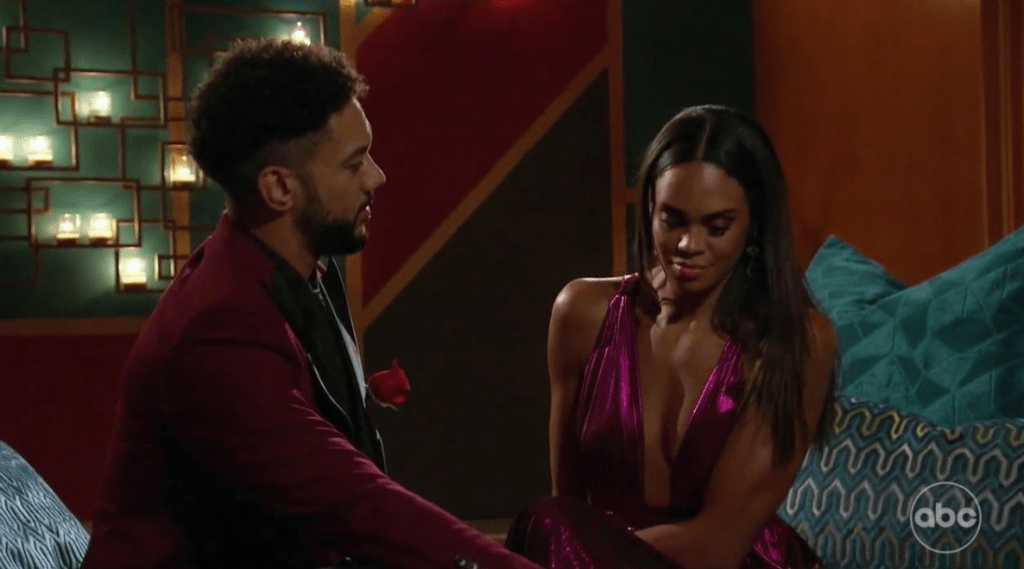 Michelle took this extremely hard. She values her integrity greatly, and she trusted that Jamie was telling her the truth. So, she gathered the men together, told them what she heard, explained the truth, and then waited for them to respond.

To which she was greeted with absolute silence because literally none of them knew WTF she was talking about.

She stormed off in tears and canceled the cocktail party. The men walked around confused and angry wondering what the hell just happened while Jamie played dumb.

Date rose confidence will get you every time. 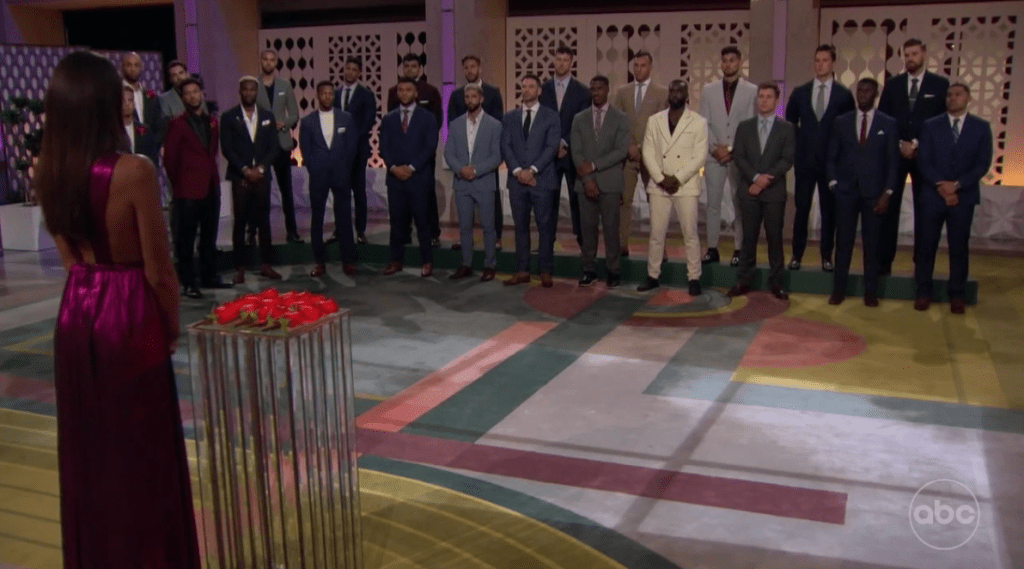 At the rose ceremony, sixteen men received roses in addition to the three that had been given out throughout the rest of the episode.

Cutting to the chase here, Nayte and Joe had roses by the end and we all know that’s all you really needed to know.

Daniel, Pardeep, Alec, and PJ were all sent home to sift through their DMs.

Don’t lie, I know you’ve been sliding in there.

The Bachelorette will be back next week with more of Jamie’s lies and Michelle killing the evening gown game. Are you team Joe or Team Nayte? Let’s talk.

The Cool Table@thecool_table
1.0K Following 1.0K Followers
RT @BlessAmysHeart: And @bethorne created a reading list/reference guide she mentions during the show. I say Beth is the brains, and I’m th…
14 hours ago
1
RT @BlessAmysHeart: Want to know what I believe now after leaving the #Evangelical church? Check out the latest episode of our #Exvangelica…
14 hours ago
2
@chels__ebooks if you can't HEAR and SEE it, you aren't fit to lick booktok's boots
18 hours ago
4
Archives
A Discovery of Witches, Books, Entertainment, TV