If you’ve ever wanted to spend two hours of your life watching 18 women argue about shrimp in Texas, boy have I got the perfect episode of The Bachelor for you.

However, if you prefer to spend those two hours watching 18 women destroy each other in a game of tackle football for the affection of a man who sometimes refers to himself as “Claydoh,” well then I have…the exact same episode of The Bachelor for you.

Basically, the whole thing is a complete disaster of Texas-size proportions.

We couldn’t ask for anything more.

You can’t have a cocktail party without shrimp 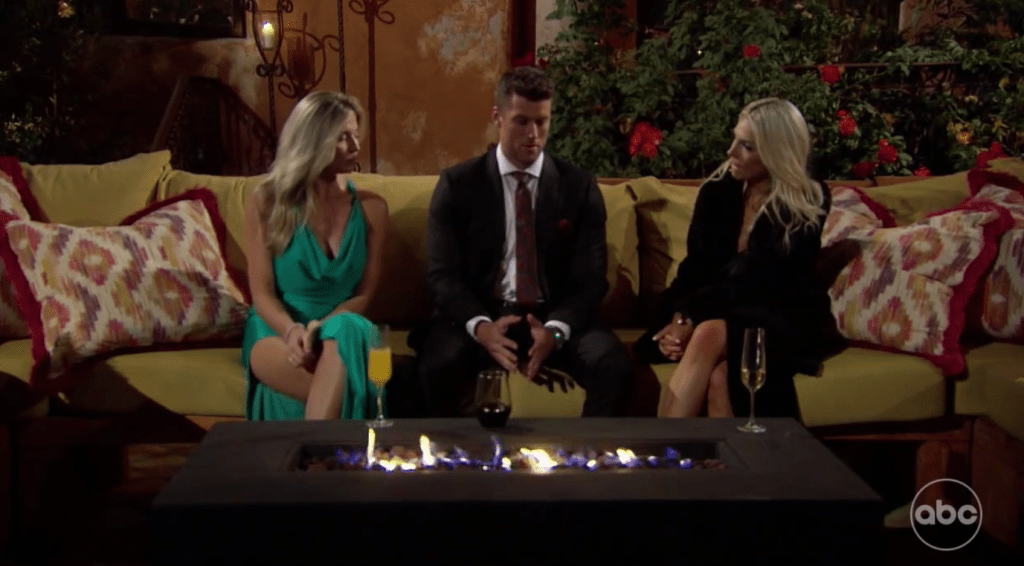 Last week’s episode ended in yet another cliffhanger when Shanae ruined her second group date in a row. It’s like she’s going for a record or something.

Thus, this episode opened with Clayton asking to speak to Shanae and her number one target, Elizabeth in the hope of quashing the tension and moving on in his journey to find love.

Haha, not to today, sucker. The Bachelor producers heard the words “shrimp” and “gate” put together and immediately decided it was the epitaph of the season.

As an emotionally mature adult, I see Shanae for what she is. She’s hurt and lashing out because she feels ostracized by the other women of whom she views Elizabeth to be the leader. And yet, she is so terrible at expressing her feelings that she just turns to insults and accusations of ignored shrimp.

As a viewer who wants to be entertained, Shanae is fully off her rocker and I hope she never leaves this season.

Anyway, Clayton was like, “We’re not talking about relationships. We are not growing together. We’re talking about shrimp.” and stormed off the set to cancel the cocktail party. 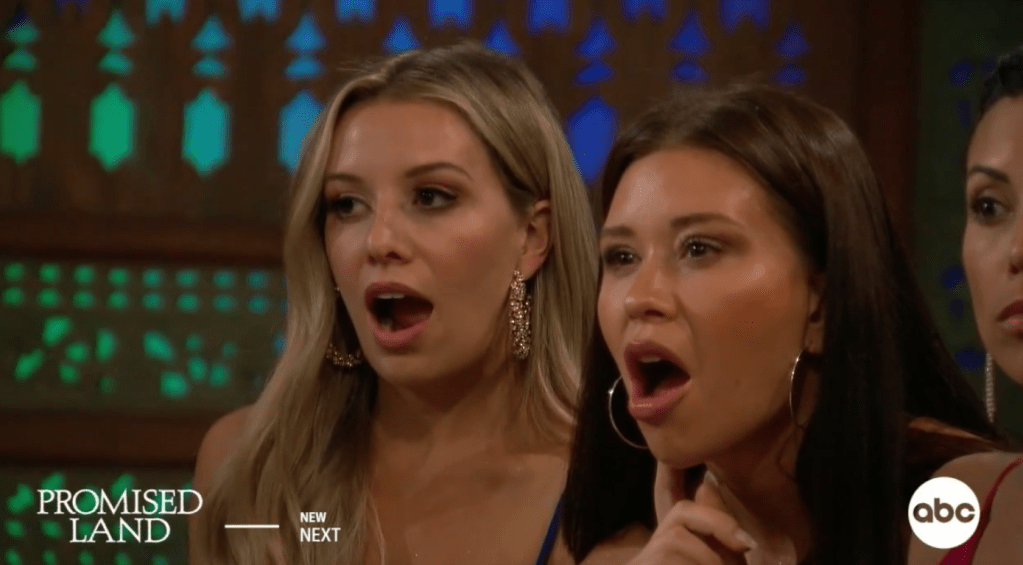 Meanwhile, Shanae filled a plate with shrimp sushi and mockingly ate it in front of the other disappointed women while they all (but especially Genevieve) lost their minds.

“It’s f*cking shrimp!” Was uttered on more than one occasion.

What did the crustacean lobby pay for this kind of advertising?

All of the women were furious that they lost their opportunity to form a last-minute hail mary relationship with Clayton at the cocktail party but at least Eliza, Sarah, and Gabby were safe with their group roses. 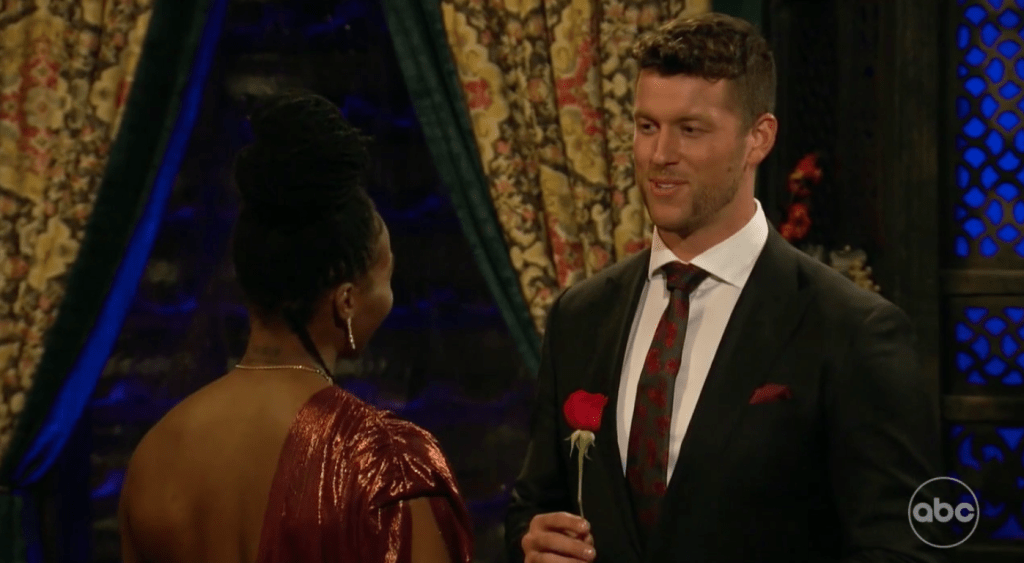 Everyone else stood on the risers waiting for their names to be called but we all knew it was going to come down to Elizabeth and Shanae.

Slowly, Clayton handed out the roses to Marlena, Teddi, Rachel, Mara, Sierra, Susie, Jill, Serene, Genevieve, Hunter, and Lyndsey until there was only one rose left.

Elizabeth looked resigned to her fate. Shanae smirked and threatened to shove a rose up Clayton’s ass.

Of course, as we have established, Clayton is a dummy dum dum, so his ass lived to see another roseless day

Shanae got the rose. 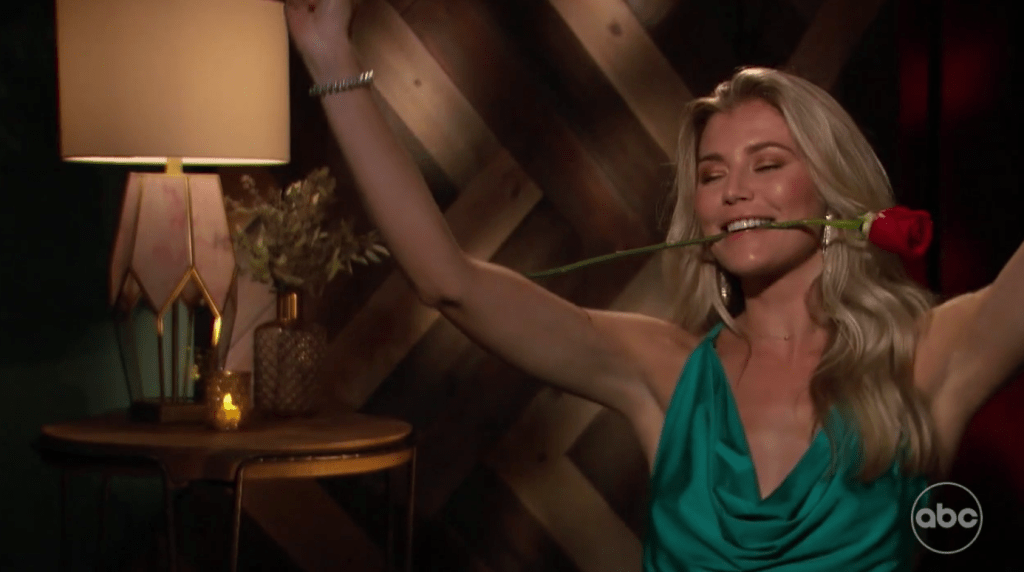 It’s been a long two years, but The Bachelor has finally returned to its roots of glamorous dates and exotic international locales by traveling to…Houston.

Once they made it to Houston, Clayton had a quick meetup with one of his best friends from college who seemed slightly skeptical about the process. (Same, bro.) And then it was time for his one-on-one date with Rachel. 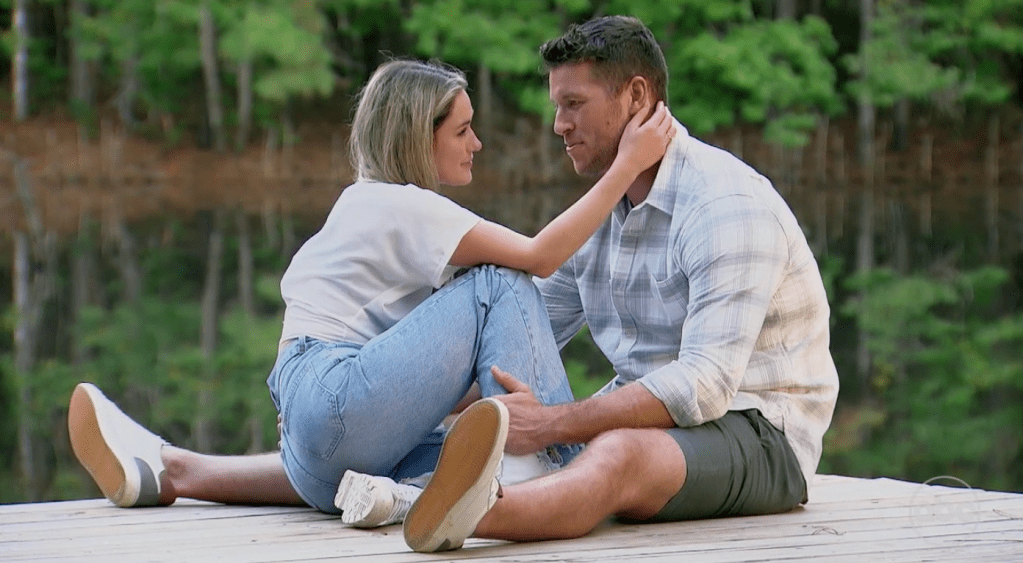 Rachel is an absolutely beautiful 25-year-old flight instructor who is so clearly a front-runner, she may as well have a blinking neon light above her head.

They rode horses, crashed a random family’s BBQ, made out on a dock, shared their feelings over dinner in a barn, and then slow danced while some band named Restless Road serenaded them. 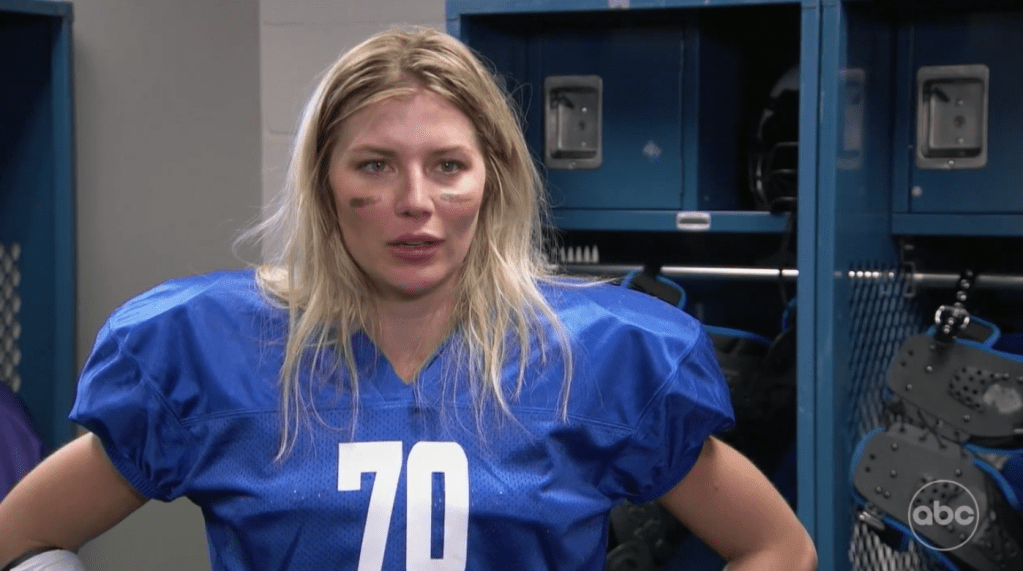 Oh, did I say tailgating? I meant to say full-contact tackle football while Clayton smiled maniacally on the sidelines.

In full disclosure, I watch The Bachelor with the express purpose of avoiding Monday Night Football so this whole thing, including the montage of Bachelor football games of the past, was not for me.

However, I did thoroughly enjoy watching Marlena, the literal track and field Olympian, destroy everyone on the field. 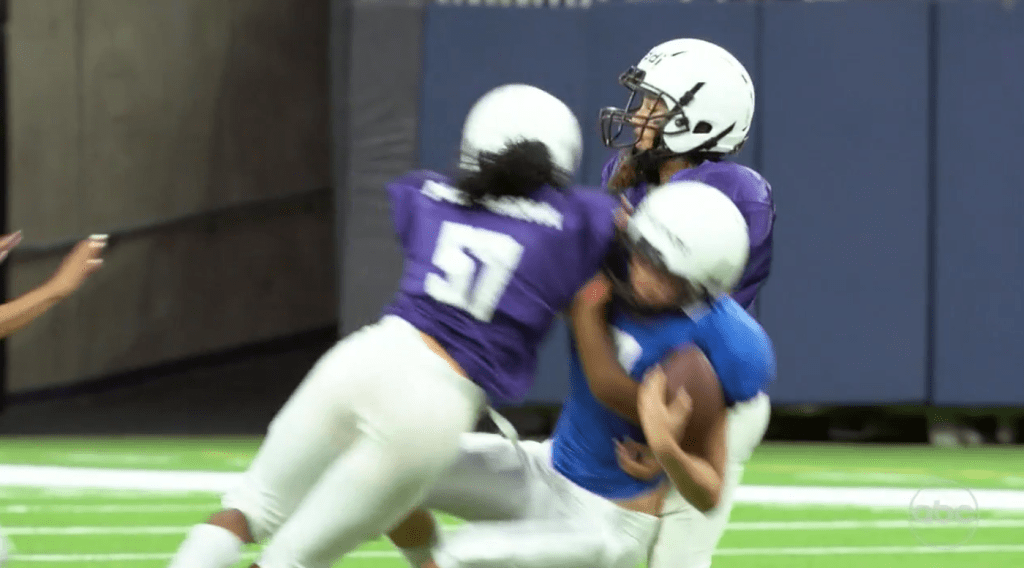 As per usual, the winners got to attend the after-party and the losers were sent home to cry.

This show is nothing if not predictable so Shanae was on the losing team. Surely she’ll stay home and respect the rules of the game, right?

At this point, we all need to accept that group dates are going to get ruined by Shanae. I don’t make the rules. 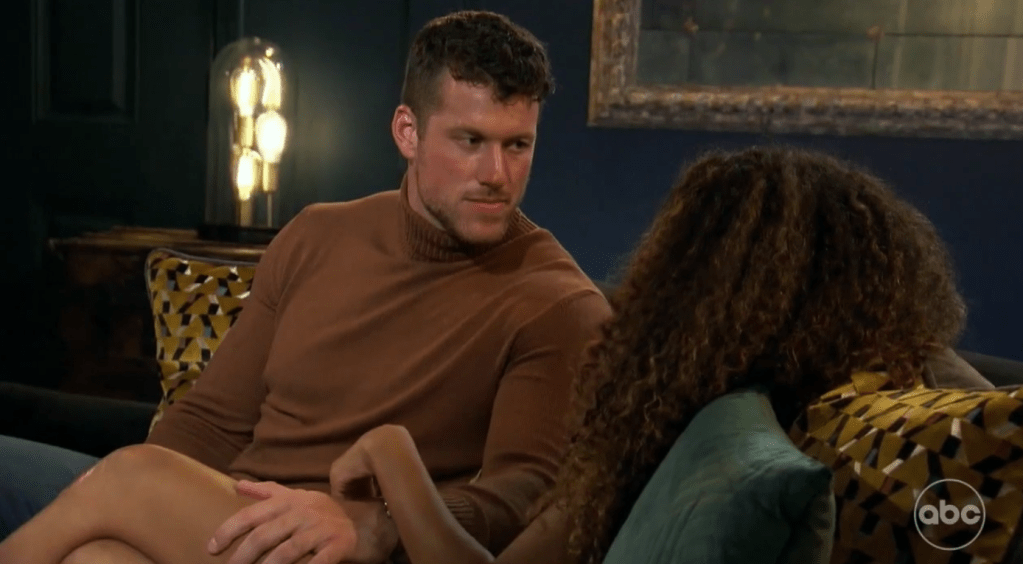 That night Clayton was trying to have a good time at the after-party hearing about Teddi’s daddy issues and whatnot, but that was never going to happen.

Shanae is living in these women’s heads rent-free so her name kept being brought up. We get it, you hate Shanae, and Clayton is incapable of seeing her red flags waving in the air. But still, worry about yourselves.

Or not, because here comes Shanae dressed to impress to crash the party. 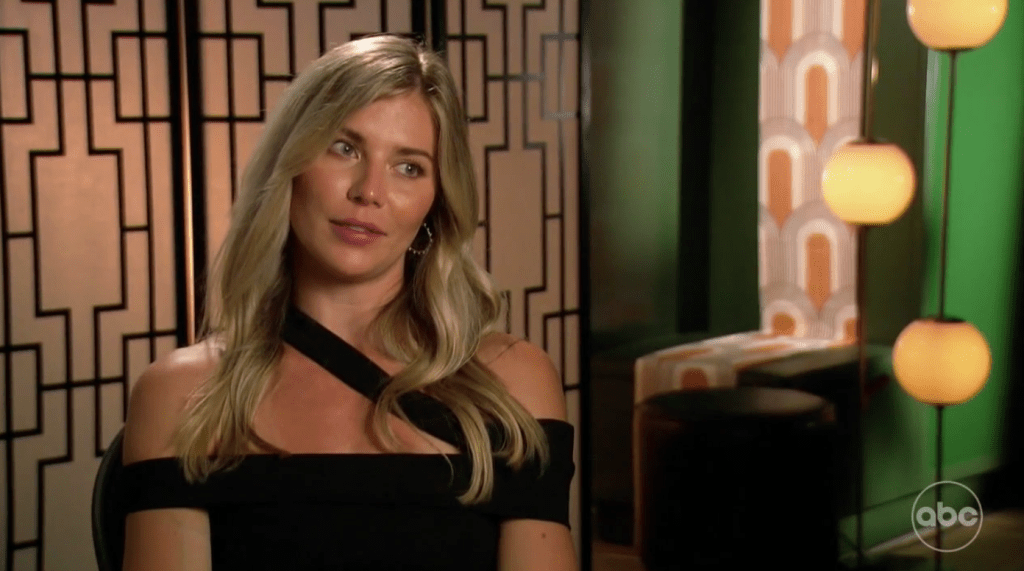 Once again, Shanae stole Clayton away because she “deserves to be there.” And once again she told him that she was being bullied.

This whole storyline is more tired than me after school drop-off, but it really doesn’t matter because Clayton is horned up for her.

Never underestimate the power of being super hot.

Obviously, they made out on top of a bar. But the real story here is that before she went back to her hotel she took a victory lap around the other women, stole the trophy they’d won, and chucked into a bush while they gaped in shock. 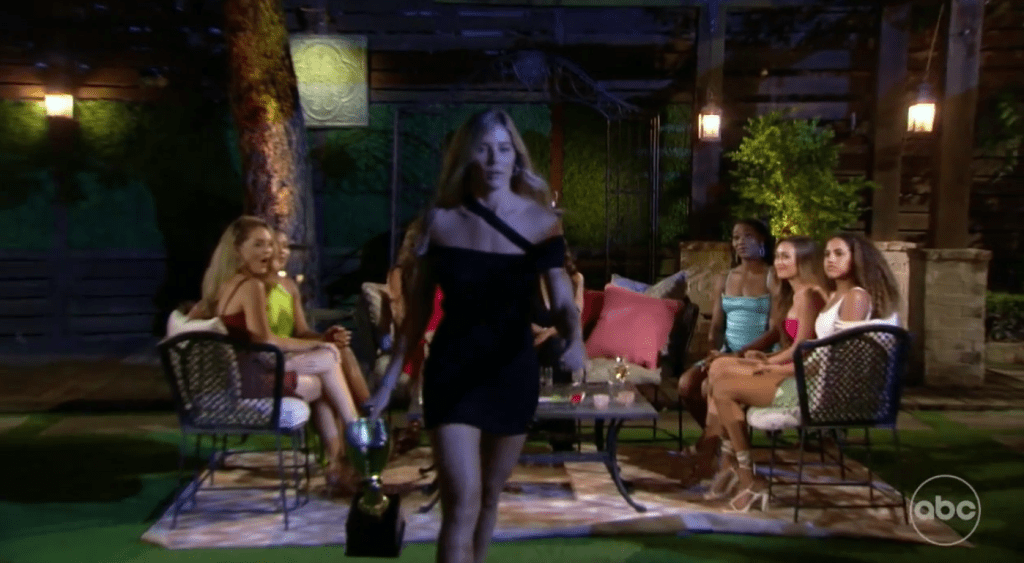 And then they had the nerve to end another damn episode in a cliffhanger.

Next Monday The Bachelor will be back with, you guessed it, more Shanae. The super teaser shows her going on a two-on-one date with Genevieve so maybe she’ll get abandoned on a deserted island somewhere or something. One can dream.

The Cool Table@thecool_table
1.0K Following 1.0K Followers
@jamiesrule @jamadoria @coolstorymere I know you know this, but I"ve had pixie cuts off and on since 1997 and m*n h… https://t.co/VsXyyN7PpC
2 hours ago
4
@LSULeslie @schizoreads I’ve legit never even heard of this
2 hours ago
@chels__ebooks Yes! Josh O’Connor supremacy! I watched this right after I got obsessed with The Durrells ❤️❤️❤️
2 hours ago
@maria_gb75 Keep him
2 hours ago
@baskinsuns AGREED. I love love loved that as a kid (and vowed to be able to do it so someone would love me)
2 hours ago
1
Archives
Books