Welcome back for part two of The Bachelor finale in which Clayton Echard continues to be a gigantic tool to the three women who inexplicably fell in love with him.

I know we’re all still processing what happened on the first night of Clayton’s finale, but take a deep breath and prepare yourself because night two is even more ridiculous.

The second night of Clayton’s finale opened with Jesse once again celebrating Clayton’s impending demise while a few Bachelor alumni sat in the live audience behind him. (We all saw Genevieve and Aaron sitting together, right?)

Then it jumped right into the episode with Jesse asking Susie to speak to Clayton because “he has been a wreck since you left him.”

First of all, he walked her to the car like a petulant child while she begged him to let her talk.

Second of all, run for your life, Susie.

Susie did not, in fact, run for her life. Instead, she randomly walked into the house Clayton’s parents were staying in and introduced herself to them?

What the hell is happening?

They invited her to sit and talk to them, but Susie thought she should probably, you know, talk to the man who is trying to win her back, so they went outside to talk instead. 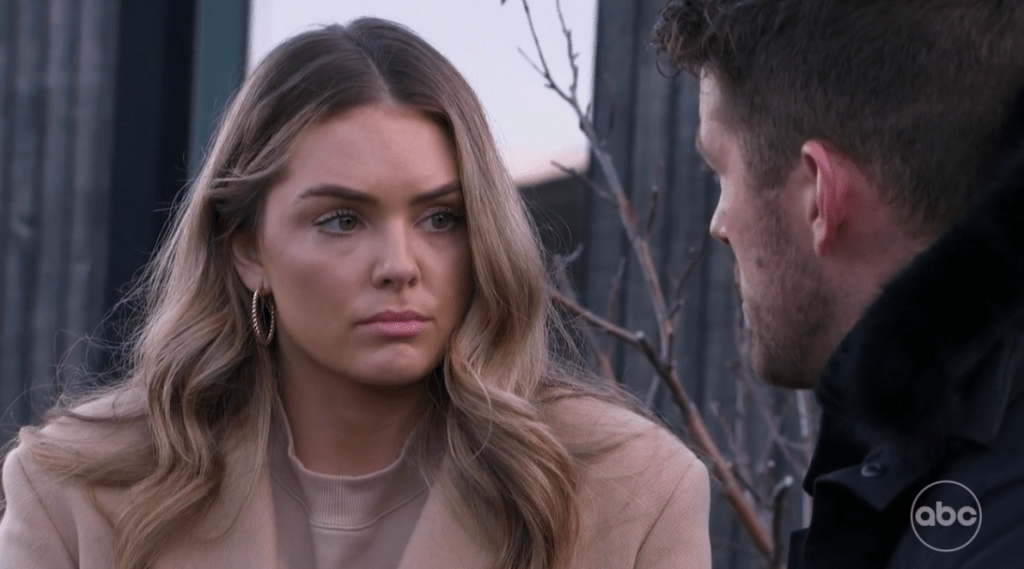 Clayton told her that he regrets everything he said and that he loves her and wants her to give him a second chance. In fact, he told her that “the second you walked out I lost everything.”

Someone should have mentioned that to Gabby and Rachel when he was begging them to stay.

Susie told him that how he treated her was embarrassing and hurtful. She said that he walked her to the car like a stray dog and while she appreciates what he said, she needs time to think.

Then she got back in the SUV and left Clayton crying in the back window as she drove away.

Now that Clayton has told Gabby and Rachel repeatedly that he’s in love with them, introduced them to his parents, and begged them to give him a chance…he’s ready to break up with them.

I can’t with this dude.

Once again, Gabby and Rachel were huddled together in a hotel room, and once again Clayton came bumbling in like a dead man walking to humiliate them. 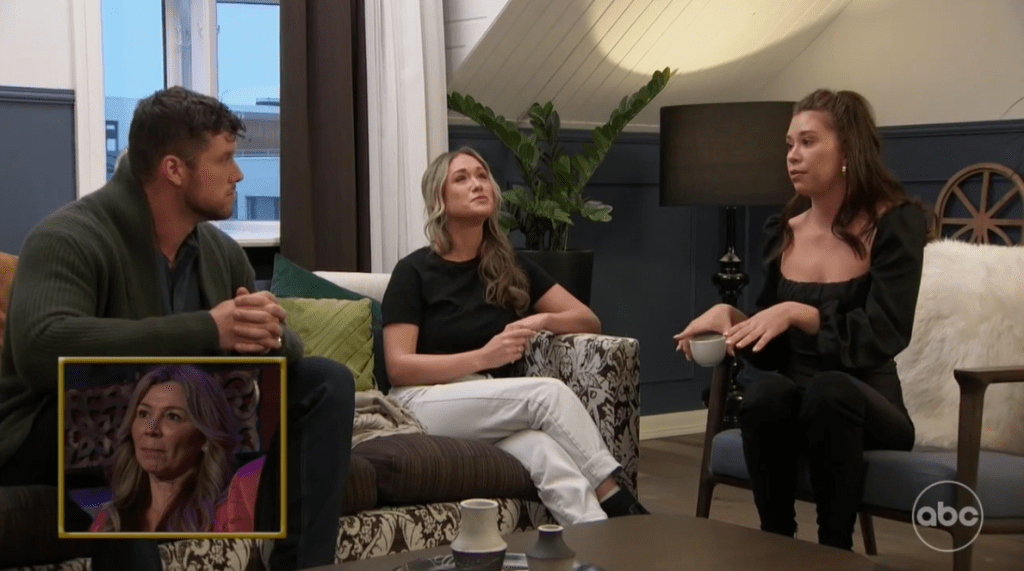 He told them that suddenly, in the past three days since he blew up one relationship and nearly destroyed two others, he realized it’s “not feasibly possible to be in love with three people.”

Someone get this man a Nobel prize. We have a genius on our hands.

Anyway, he loves Susie not them so he’s sending their asses packing. Bye!

Gabby Reads Him For Filth 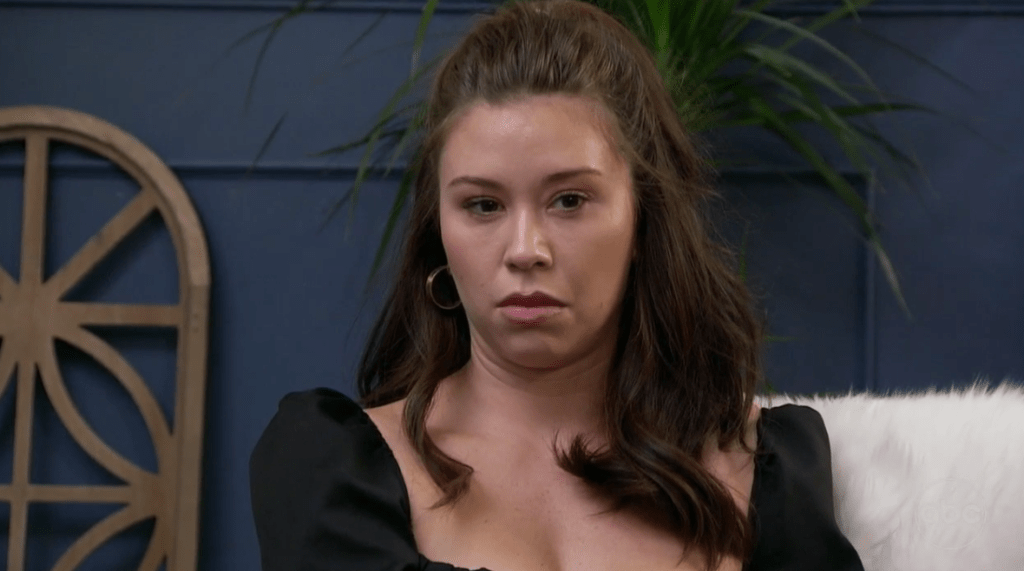 Gabby was like, “Yeah, no. I’ve seen enough,” and walked out on him and his time-saving group breakup.

Clayton has never seen a boundary he didn’t want to cross so he followed her down the hall to another room where she was fuming and rightfully so.

So Gabby let him have it. 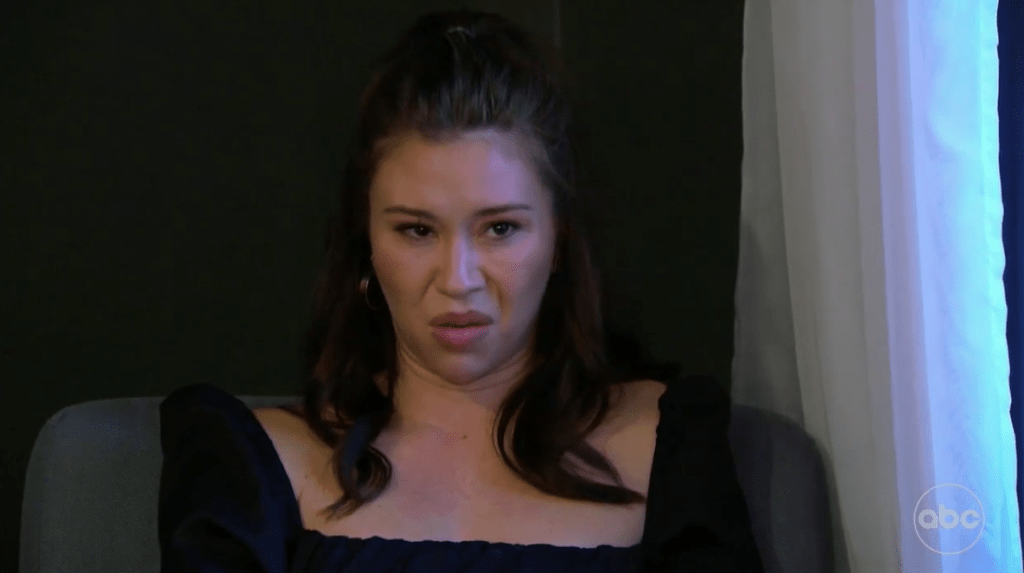 She told him that he only waited the extra days after convincing her to stay for his own benefit and own ego. In fact, she doesn’t think he ever once considered her or anyone else’s feelings. Rather, when she had finally made a decision to leave on her own terms at the last rose ceremony he talked her out of it and stole that moment of power from her because he’s selfish.

To be fair, his words sucked too.

Clayton asked if he could walk her out, but she scoffed “no” with a disgusted look on her face and left him behind. 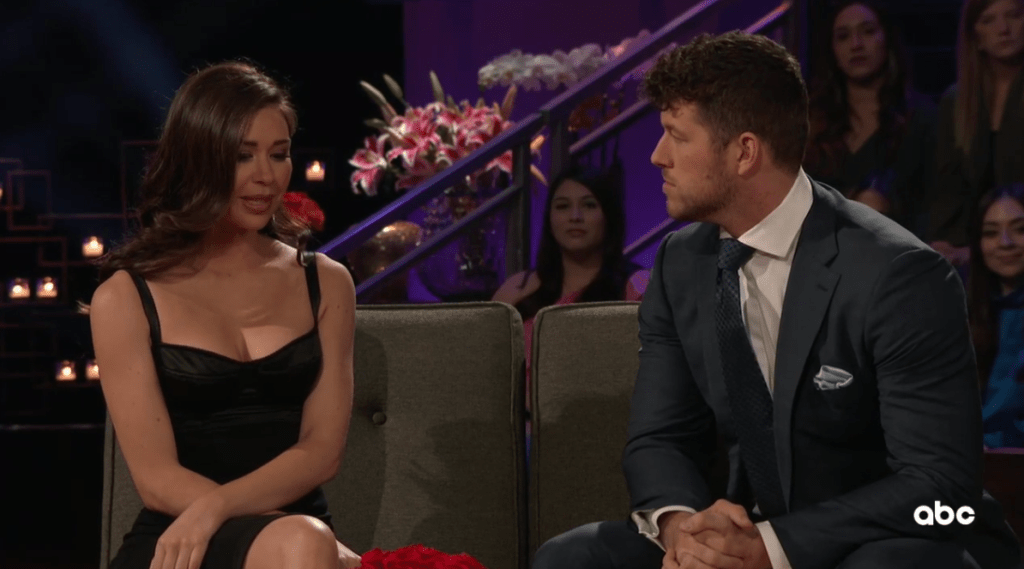 Fast forward a few months and now Gabby was sitting with Clayton in front of the live audience and Jesse for their first meeting since the break-up.

Clayton was contrite but Gabby still dominated the conversation. She told him that she doesn’t think he was malicious, but he wasn’t ever honest or transparent and she feels betrayed by him.

He tried to tell her that he felt love for her and Gabby stopped him short with the best speech of the season.

“Clayton, I know it’s hard for you, but when you say you ‘love’ someone you’re assuming responsibility to care for them and protect them and not hurt them and you didn’t do anything of those things.” 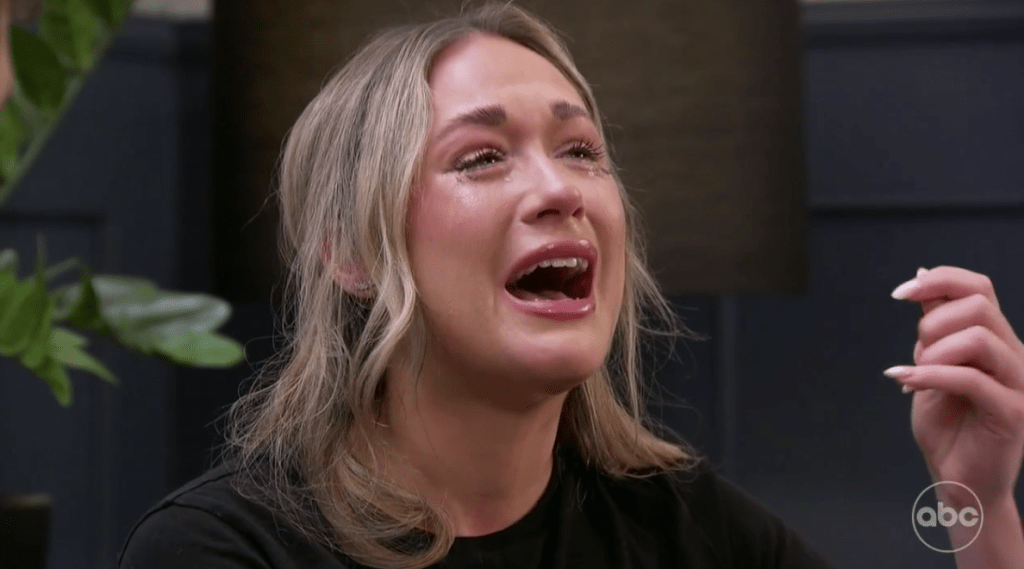 Meanwhile back in Iceland, Clayton still had to face the music with Rachel.

Her hands were shaking and her mascara was streaming down her face while she told him that no one is ever going to fight for him the way she has. In fact, she pointed out that no one else has stood by him like she has. When Gabby and Susie tried to leave, Rachel stayed and she told her parents how much she loved him even when he had hurt her so badly. 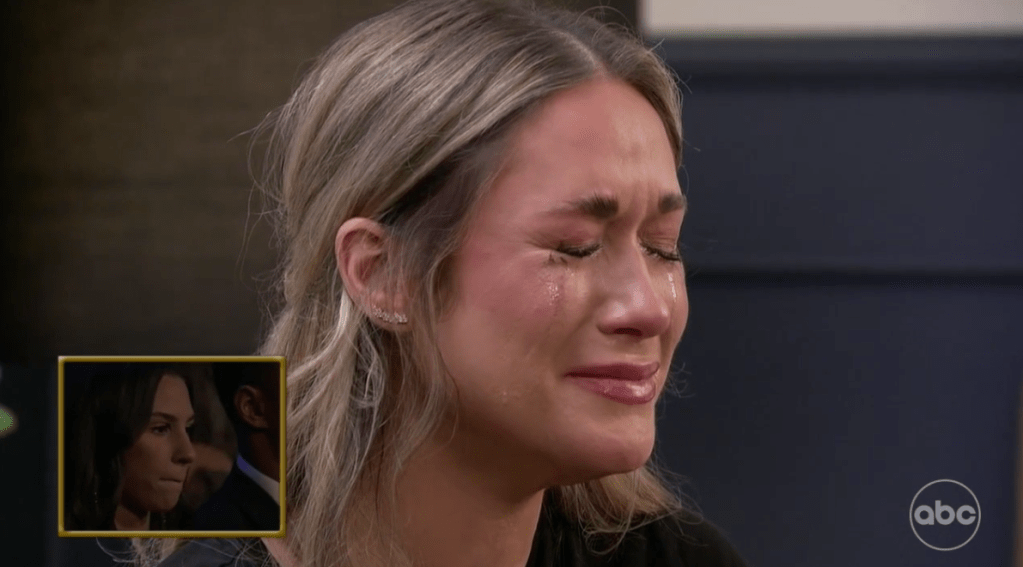 But Clayton was unmoved.

She stood next to the SUV in disbelief that he was letting her go and told him that this decision was going to haunt him.

He told her that it could be the biggest mistake he has ever made, but that he had to follow his heart.

She left in the car while sobs wracked her body. 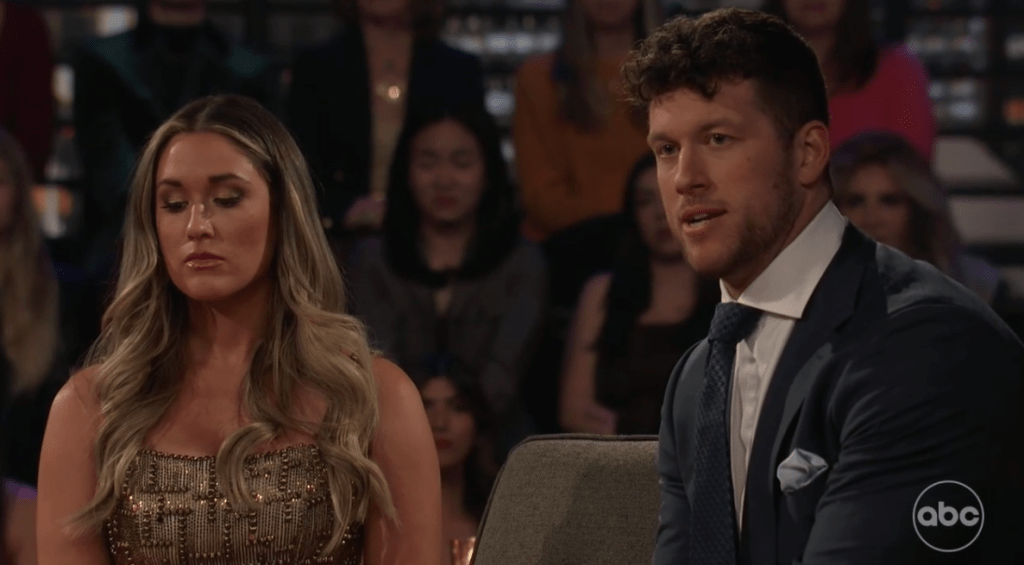 Fast forward to tonight when Rachel appeared live on stage to talk about everything that happened with the clarity of time and more information.

It turns out that getting the full story from watching the last few episodes had changed everything for her.

She feels betrayed, misled, disgusted, and she is no longer in love with Clayton. 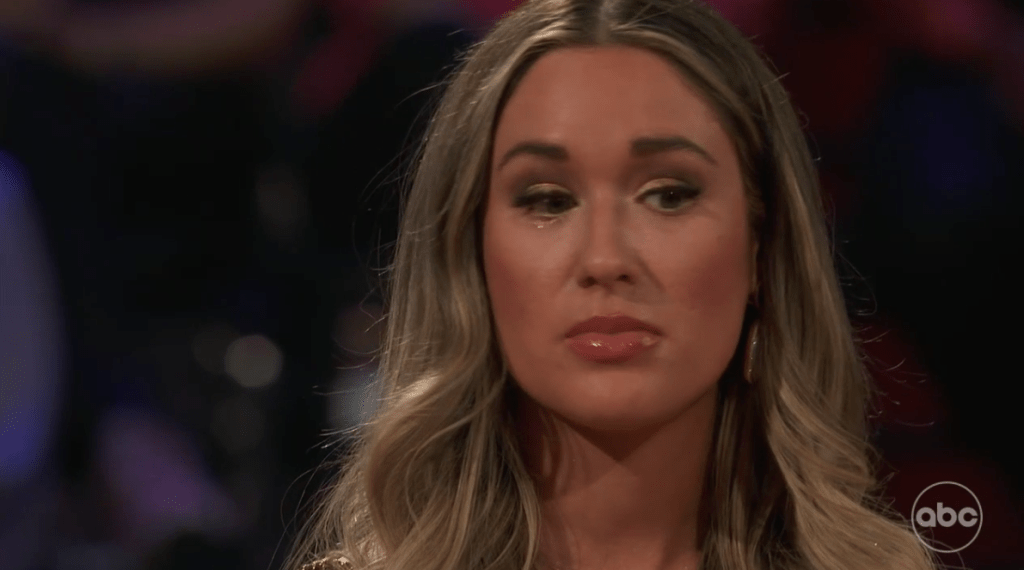 It really didn’t matter how much Clayton apologized to Rachel. She had no interest in hearing what he had to say. In fact, the only question she asked him was whether or not he only said he loved her in order to sleep with her.

Clayton denied that, but he may as well have stayed silent because Rachel didn’t believe him.

Meanwhile, her parents offered her their support from the audience and sent death glares toward the stage like they were about to put a hit out on Clayton. 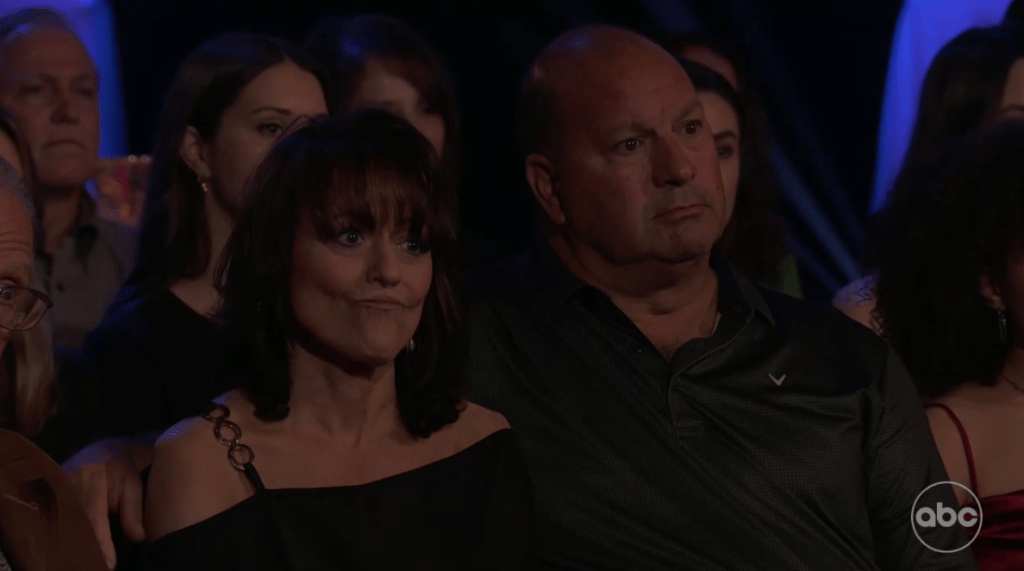 If you remember anything about her dad you know that’s a real possibility.

With Gabby and Rachel gone, the path was clear for Clayton to go crawling back to Susie. When I say “clear” I mean that path was muddy, pot-hole-filled, and covered in danger signs, but technically, clear. 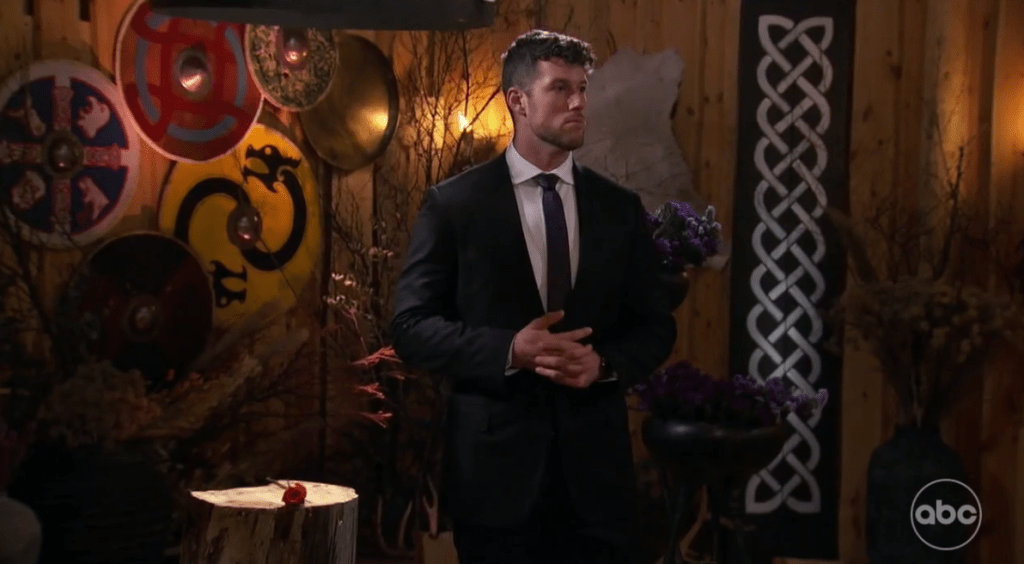 So he sent her a letter expressing all of his feelings via Jesse like it was junior high.

It would have saved us a lot of time if he had just written: “check yes or no.”

Instead, he invited her to meet him “in the country.” 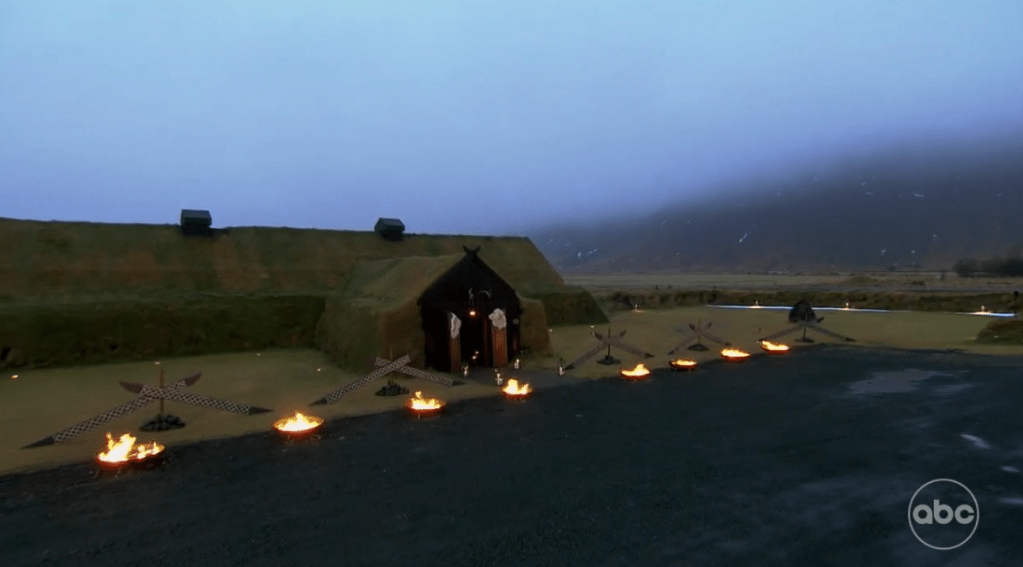 Of course, by “country” he meant the fully bedecked Viking longhouse the set designers had laboriously decorated for apparently no good reason because this season was a waste.

And by “meet him” he meant show up to the final rose ceremony because he had an engagement ring in his pocket.

HE HAD AN ENGAGEMENT RING IN HIS POCKET.

Anyway, the show needed an ending and Susie already had her hair done so she showed up, after all, wearing a long white gown and a fur capelet. 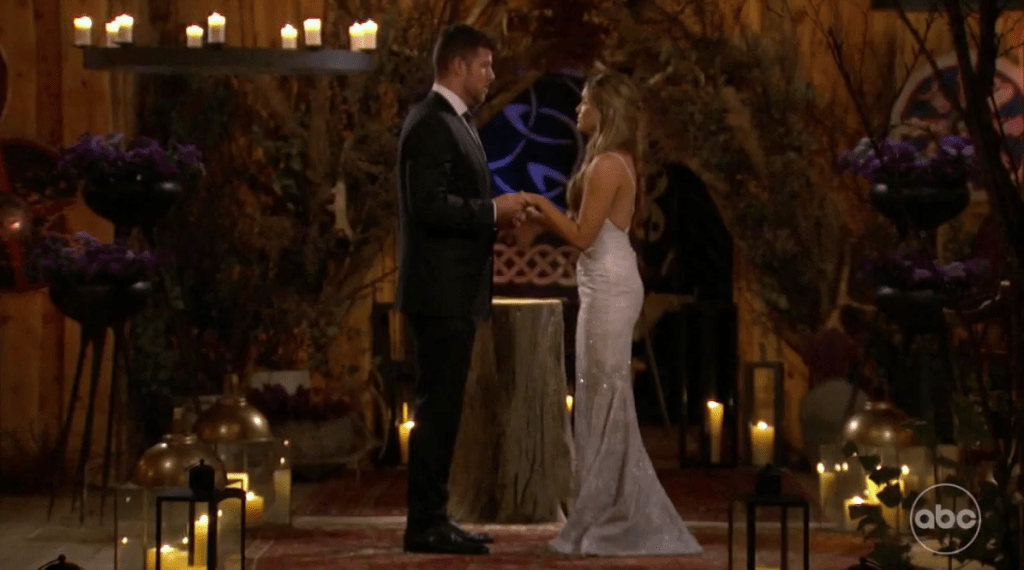 Clayton was thrilled to see her and immediately started gushing about how he sees a future with her and wants to leave Iceland to build a life together.

Susie thanked him for his words, paused, and dropped the dreaded but much deserved “but.” 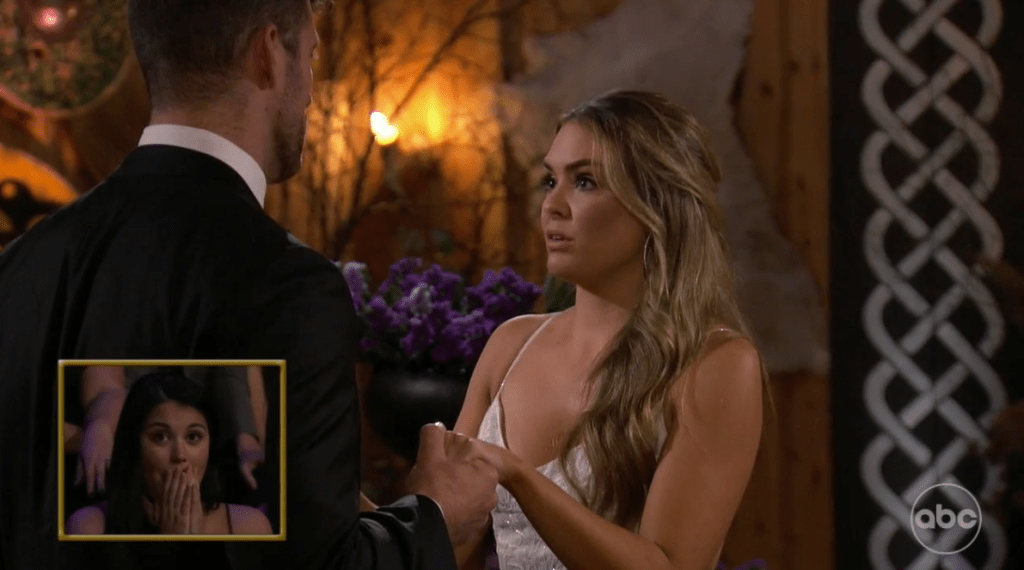 She doesn’t love him the way that he loves her and she has made the decision to leave Iceland alone. 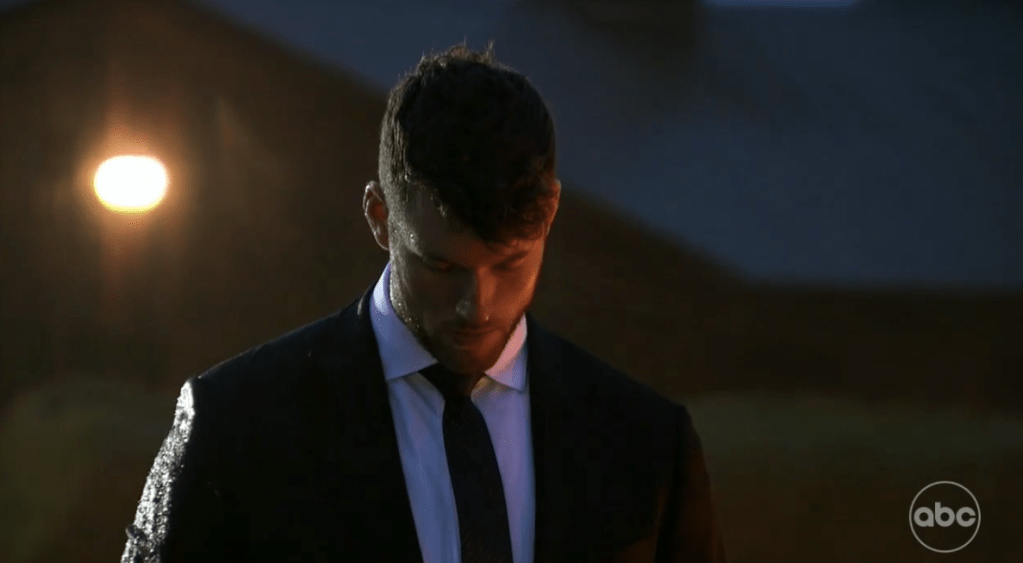 Clayton asked her if there could ever be a chance for them or they were over. To which she replied, “I feel like it’s over.”

And just like that Clayton’s finale ended with him single AF.

Ugh, someone put us all out of our collective misery.

Clayton came out on stage to talk to Jessie about all of his regrets and everything he has learned. But then he mentioned that about four months ago someone he never expected to her from again reached out to him and changed everything.

I’ll give you one guess who it was.

Obviously, it was Susie. 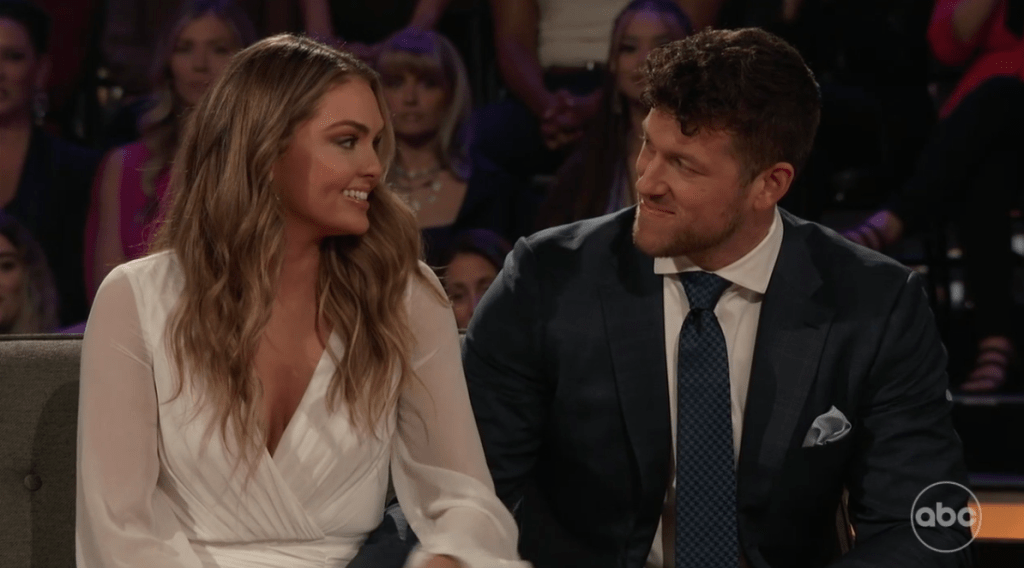 Apparently, they’re in love and he’s moving to Virginia to be live with her. They’re not engaged but they care greatly for one another.

Honestly, Susie is so damn likable that it even made Clayton seem more bearable.

At least we probably won’t have to see him in Paradise.

Speaking of other shows in the Bachelor franchise they made a last-ditch effort to save the season by announcing something huge.

The Bachelorette will be back and this time both Gabby and Rachel will be looking for love together. As in an entire season with two bachelorettes. 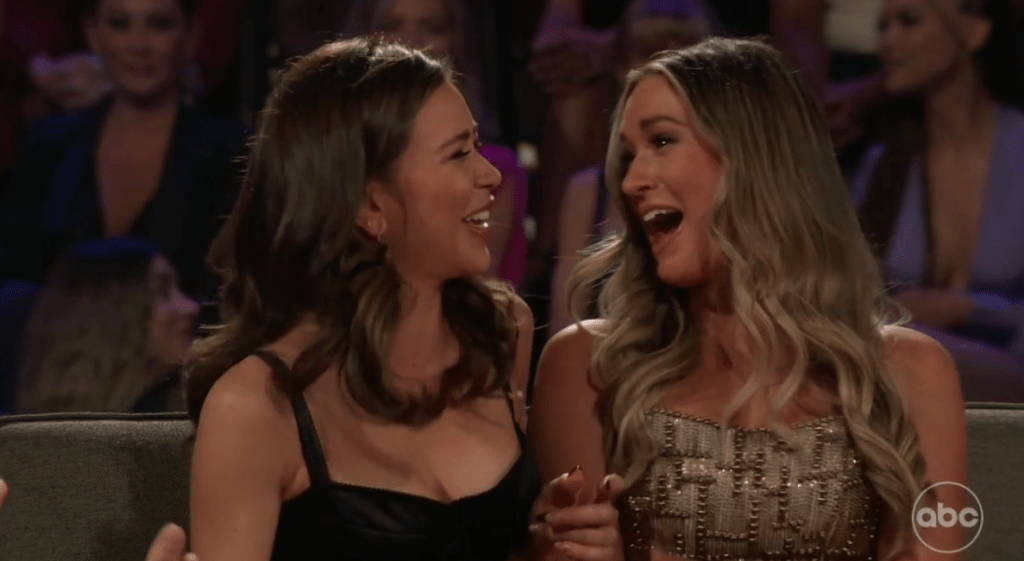 Gabby and Rachel were shocked by the news and immediately started hugging and talking over Jesse. Gabby asked her “Do we have to date the same guys.” To which Rachel responded, “Well we did it once before.” 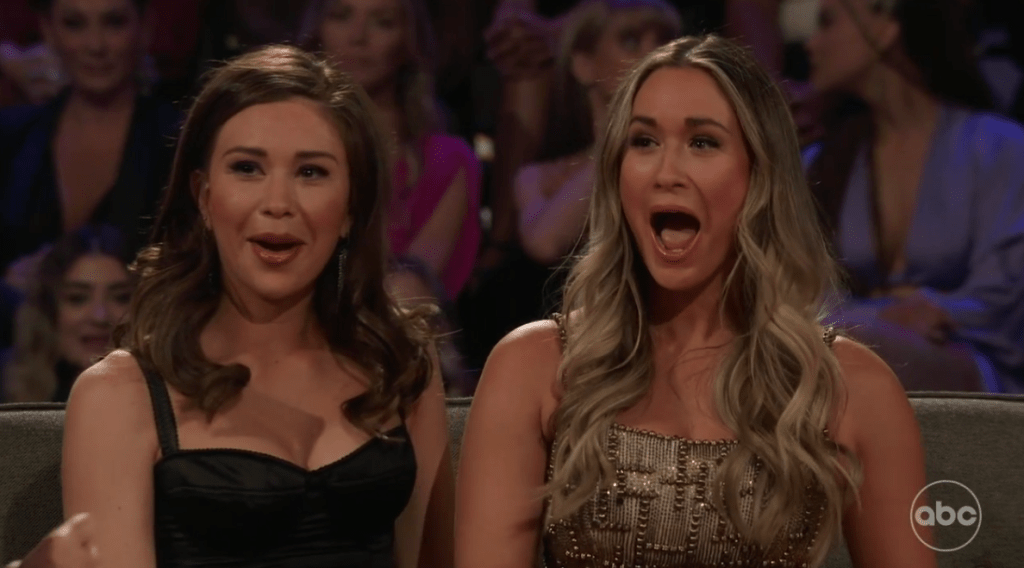 So that’s it. Clayton’s finale is over.

Clayton got everything he wanted. Susie got that half-baked manchild. Gabby and Rachel will be on our screens again coming in July. Jesse will replace Kaitlyn Bristowe and Tayshia Adams as the host. And we all get a long-deserved break from Bachelor nation.

Thank you for reading another season of recaps. I think this was my 22nd season of recapping Bachelor franchise shows and by far my most challenging year to date. See you in July!

The Cool Table@thecool_table
1.0K Following 1.0K Followers
Yesssssss https://t.co/rGaJC4TAJ4
59 mins ago
1
Latto Brought Big (Villain) Energy to #TheBachelor for episode two of Zach's season. https://t.co/qyqmqEZIpH
9 hours ago
1 4
@pagemelt I know nothing about them but it's a good assumption since the album is titled Dear Wormwood. I have so m… https://t.co/rXXSQbWwlG
11 hours ago
2
@pagemelt isnt the whole album based on the screwtape letters? RED FLAGs
11 hours ago
1
@MrsKowski unfortunately yes
11 hours ago
Archives
Entertainment, The Bachelor, TV