Somehow it’s already time for Michelle’s hometown dates and the families of her remaining boyfriends are arriving in Minneapolis for the big meet and greet. I like to imagine them sharing a shuttle from the airport, but that’s just me.

Here’s who is still in the game:

That’s right, all four remaining men and the lead are people of color for the first time in Bachelor Nation history.

BRB, writing a letter to Santa asking for this season to never end.

First up to the metaphorical plate was Brandon who decided that he’d use his chance to show Michelle what life is like back in Portland by taking her to a skate park.

Yeah, Brandon is a sk8r boi. For some reason that tracks.

Unfortunately, for Brandon he may look like he’s still 17, but he no longer has the skills he once had. There wasn’t a kickflip or an ollie that he could land. 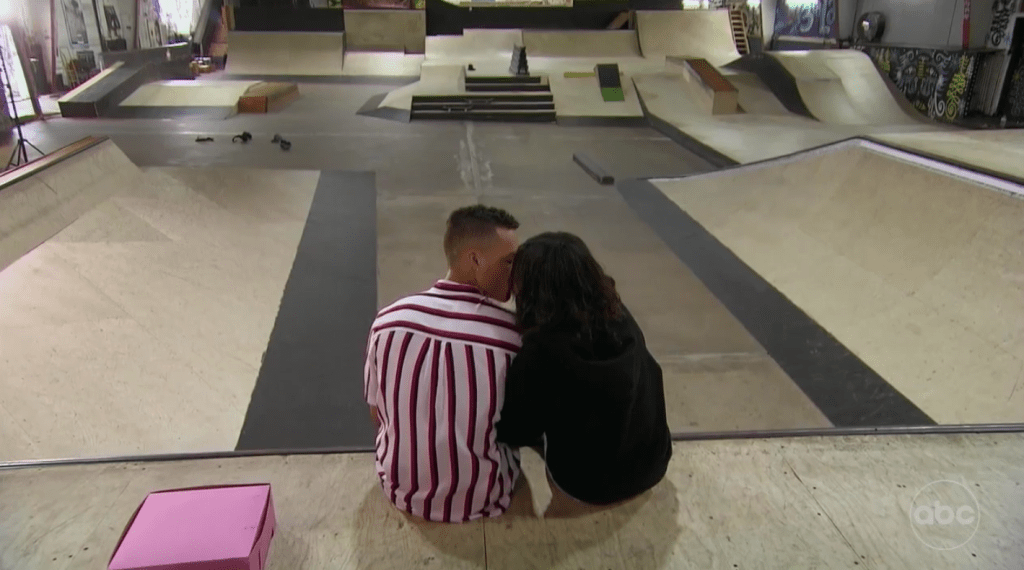 If you’re wondering why I have the words, “kickfip” and “ollie” in my repertoire it’s because I, like Michelle, used to dress up in a black hoodie and hightop vans to flirt with cute boys at the skatepark.

Except I was fifteen.

Nowadays I can’t look at anyone my age who still skates without thinking of their health insurance policy.

Later that night, Michelle and Brandon met his parents and brother at what I assume was their AirBNB. His mom, Carmen was nervous that Michelle can’t see the “real” Brandon, and his brother, Noah, was nervous that she had three other boyfriends, but there was no real drama here.

In fact, the main story from the first of Michelle’s hometown dates is that Brandon has guzzled the Bachelorette Kool-aid.

Michelle is the woman he has been waiting for. He wants to be the man she chooses and he said (with complete confidence) that he wants to marry her. 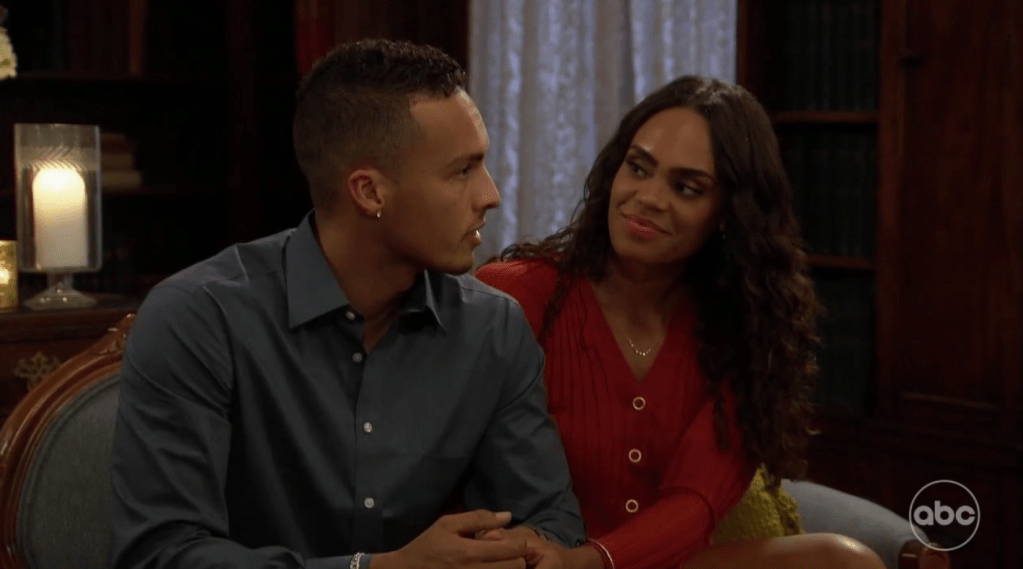 Brandon’s family gave her their stamp of approval and Michelle ended the night by telling Brandon that she’s falling for him too.

Okay, so that’s what happened but here’s my take: Brandon legit loves her, but if they don’t end up together he’ll realize that was partially the Stolkholm Syndrome talking. As for Michelle, she likes him a lot, but mostly she likes that he likes her.

Rodney is an angel of a human that deserves the world, but all I know about his relationship with Michelle is that they blind taste test apples together more than an average amount. So it makes sense that their date would take place at an apple orchard.

I’m not sure what an apple orchard has to do with his hometown of Rancho Cucamunga, but we’re going to roll with it. 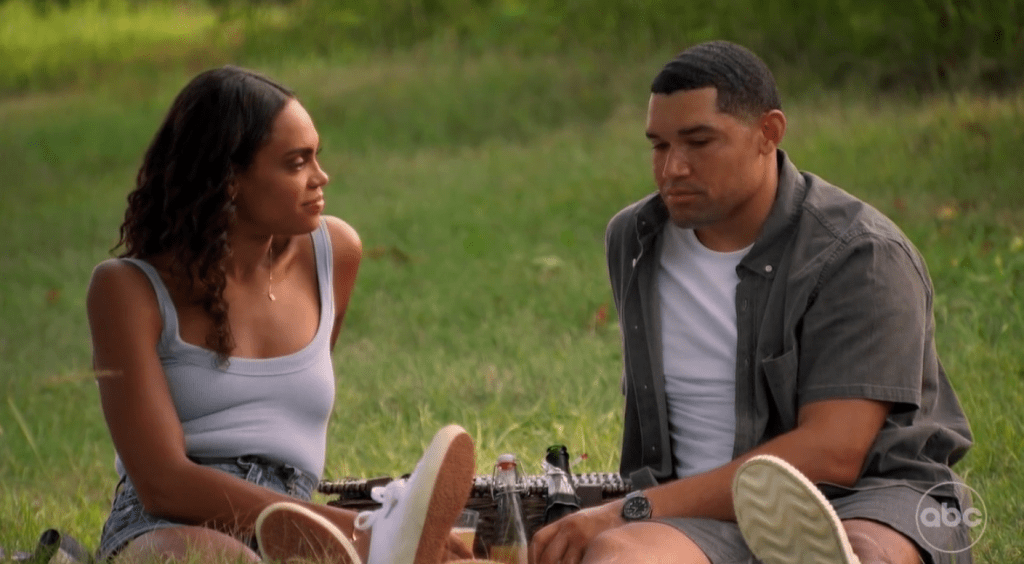 They spent the day picking apples, picnicking, and laughing. It was like one of those Christmas Hallmark movies if instead of falling in love at the end, they fall into the friend zone.

I love Rodney. I love Michelle. They are not a match. 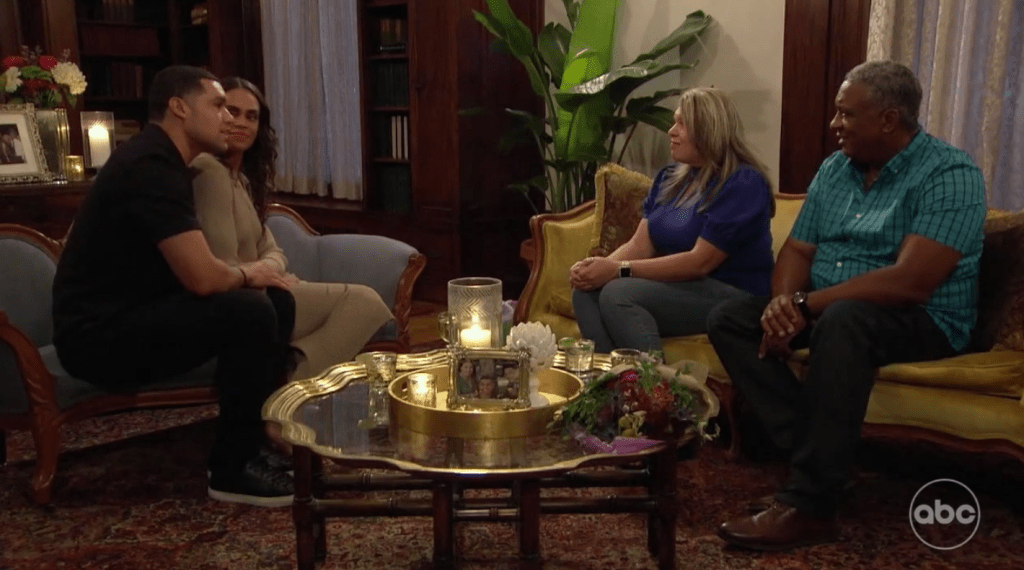 This show really committed to this whole “hometown” theme because there were even framed photos from home in the suite where Rodney’s mom and stepdad were waiting to meet them. Although, I have a feeling that Rodney and his mom have lots of photos together because they’re BFF and it’s adorable.

Rodney was riding a high introducing Michelle to his parents, but the whole time his mom had a wary look in her eyes. 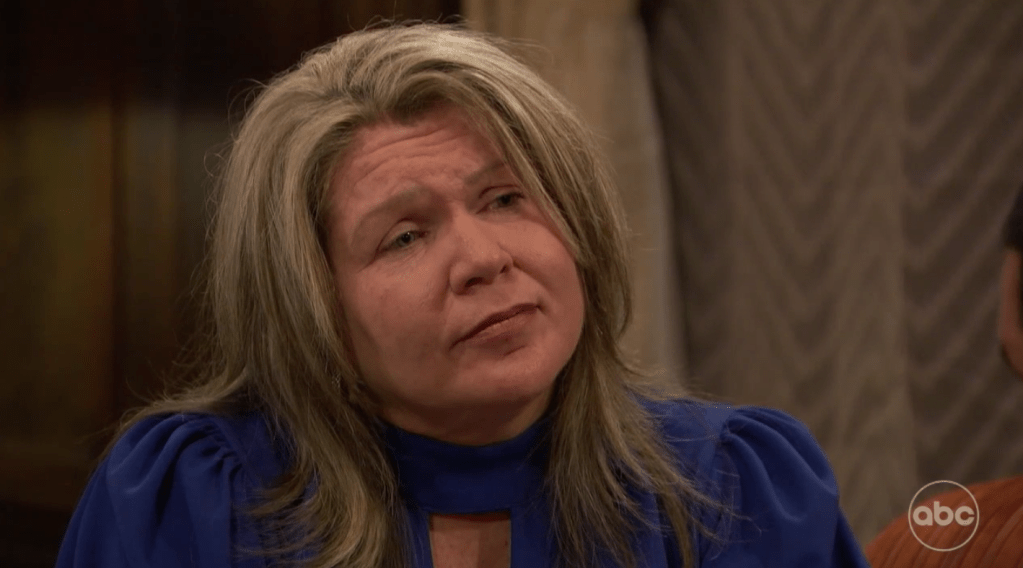 She asked Michelle what set Rodney apart from her other men and all Michelle could say was that he’s dependable and funny. You know, like a pet or a friend.

After her conversation with Michelle, his mom was on high alert. She was pretty sure that Rodney was about to be heartbroken. In their last conversation, she tried to warn him, but he just wasn’t ready to hear it.

So off he and Michelle went to say goodbye and live in the bliss of the moment while his mom stayed home to stock up on ice cream in case she has to console him.

In all honesty, Joe and Michelle could have done his laundry and she would have been like, “best date ever!!” but instead they visited his high school and had their own prom.

Sure, he has home-field advantage since Minneapolis is his hometown as well, but the fact that he looks absurdly good in a tux didn’t hurt. 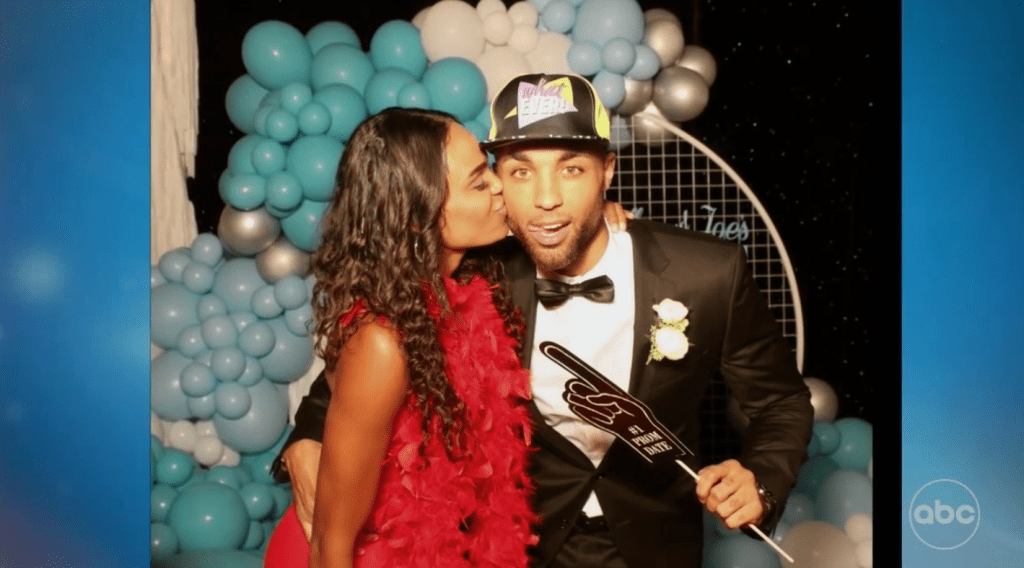 Michelle loved that he remembered her poem about being picked last for prom and she said their date was the “most fairytale moment that I’ve had in my life.”

Okay, so she’s a bit nervous that he hasn’t explicitly said that he’s in love with her, but if you’ve seen the way they kiss you’d know it to be true.

Meeting Joe’s family was truly one of the funnier hometowns I’ve ever watched. Not because they were characters, but because they barely spoke. I’m pretty sure I heard crickets during Joe and his dad’s alone time. 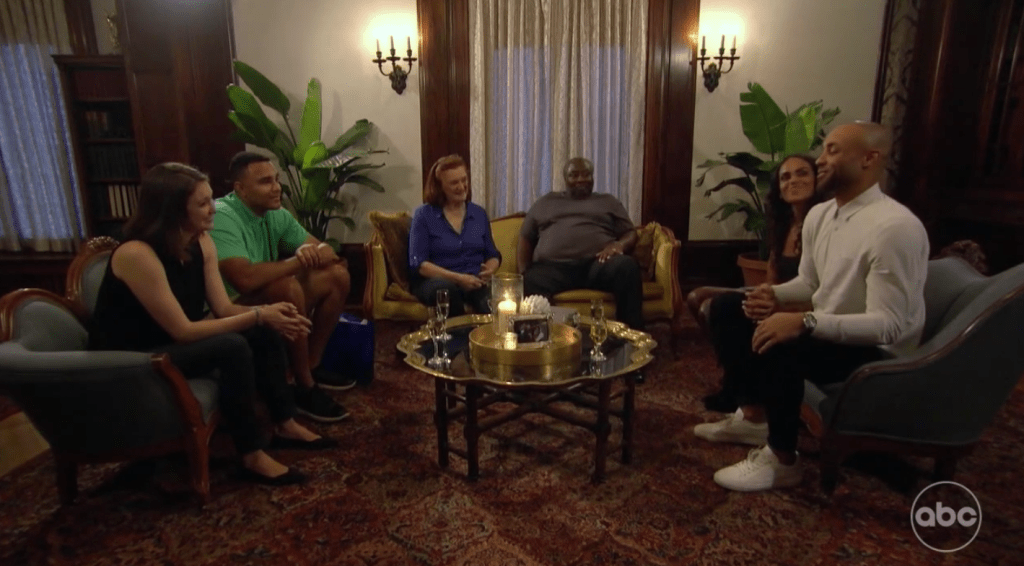 You know how Joe has a hard time expressing himself verbally? Yeah, that appears to be a dominant trait in his genetic composition.

Thank god for his sister-in-law Hannah.

Hannah was like, listen, the Coleman men get quiet when they get nervous so why don’t I just take this whole thing over. And girlfriend got it done. 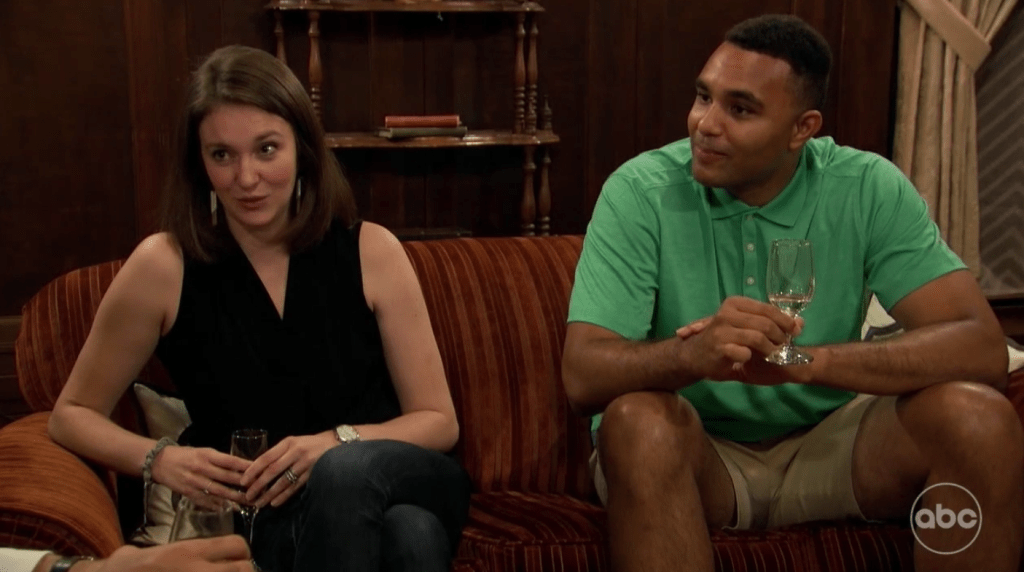 She got Joe to admit that he sees himself proposing to Michelle. She got Michelle to see how wonderful being a Coleman could be (as long as Hannah is there to interpret). And she got me to be fully 100% committed to being #teamjoe.

By the end of the night, Joe had worked up the courage to tell Michelle that he’s falling for her.

I couldn’t wipe the dumb grin off of my face.

Apparently, Canadian Nayte considers Austin, TX his hometown, so he and Michelle spent their day paddleboarding. I wasn’t aware that paddleboarding was a favorite pastime in Austin, but I won’t complain about a chance to see Nayte shirtless. 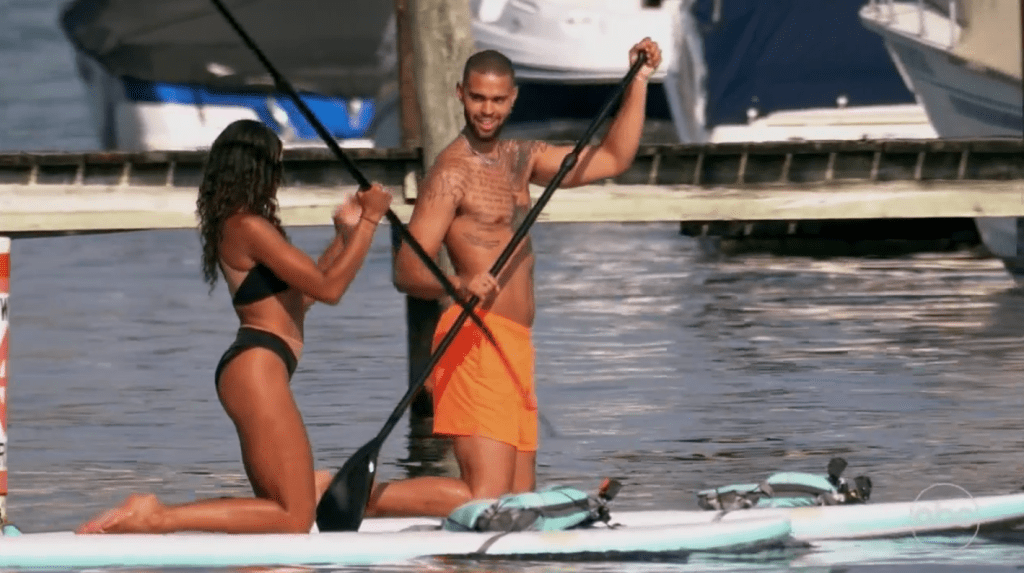 Nayte and Michelle have a flirty, playful vibe to the point where you can almost see their sexual chemistry playing out in front of us. But on this date, Nayte let it slip that he’s head-over-heels crazy for her. She stopped to see if he meant it and when he said “you knew that” she said it back.

I really hope for her sake that he meant it because Michelle is super into him and it’s going to be hard to watch if it goes sideways.

Nayte Finds Love One Way or Another 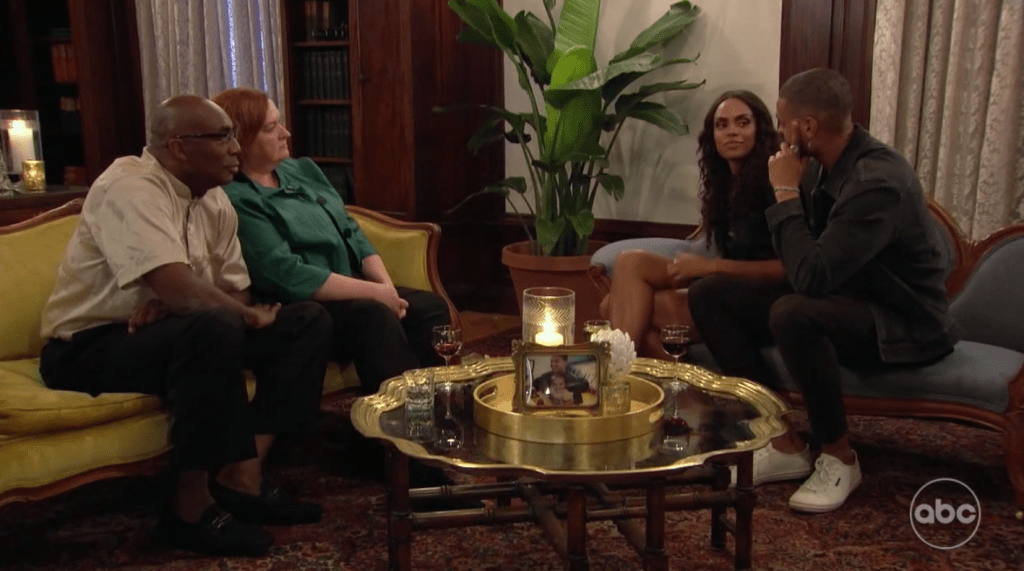 Nayte’s Mom and Stepdad divorced over a year ago but they were both still united in their belief that he is absolutely not ready for a committed relationship.

But who cares about all of that, because Nayte and his stepdad had a heart-to-heart that ended with them both in tears and telling each other “I love you” for the first time ever. 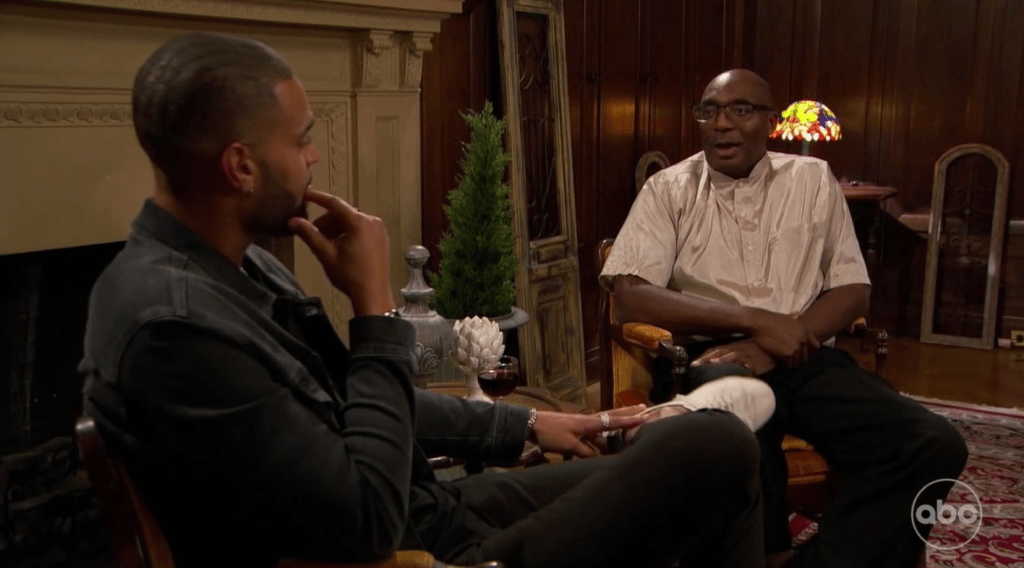 Nayte told him, “I want to have a family someday and I want to be who you were for me for them.”

And then his stepdad said, “You’ll be even better than me.”

I legit haven’t stopped crying. It was so moving.

I mean, not moving enough to convince me that Nayte is ready to be engaged to Michelle, but I’m happy for him.

By the end of the night, Nayte had healed some old wounds, but Michelle had a new list of concerns to lose sleep over. 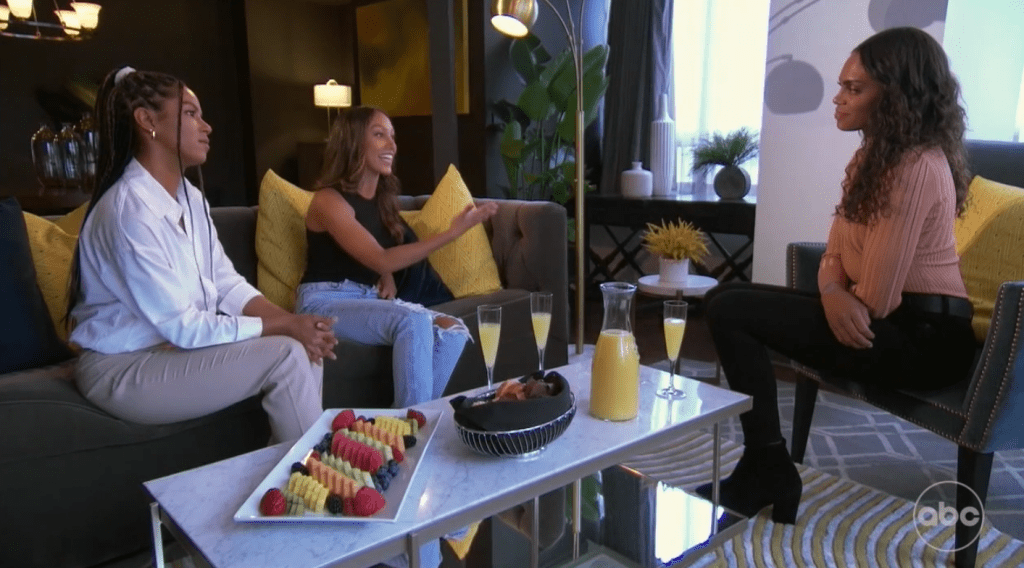 Before the Rose Ceremony that would determine which of the three men would move onto fantasy suites, Michelle had two surprise visitors.

Don’t get excited. It was just her besties, Bri and grocery store Joe’s fiance Serena P., from Matt’s season. She told them that this journey is working for her and she had feelings for multiple men.

Yeah, we know. Get to the good stuff. 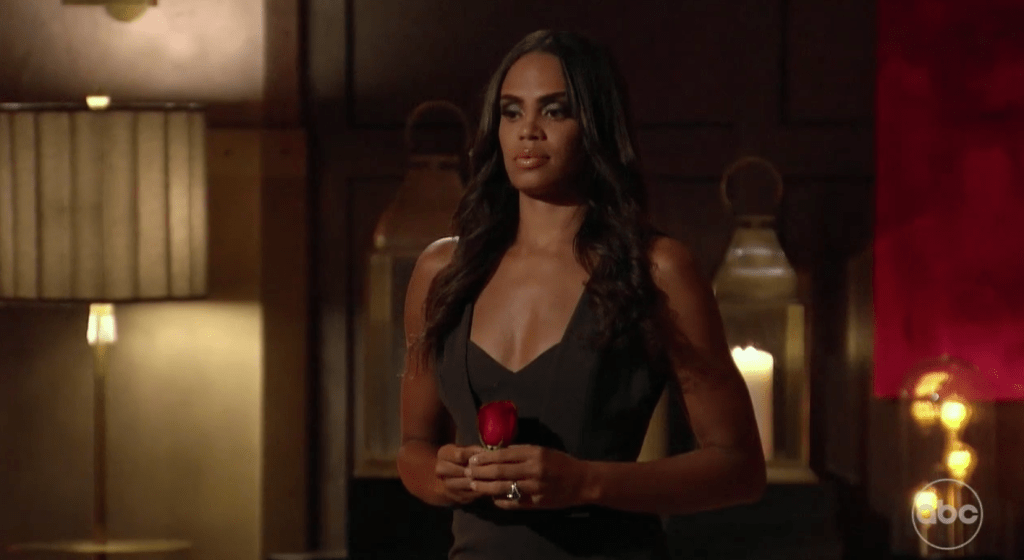 Cocktail parties are a thing of the past so Michelle came in looking insanely good in a black gown with cutouts ready to make her decision.

The first rose went to Brandon. 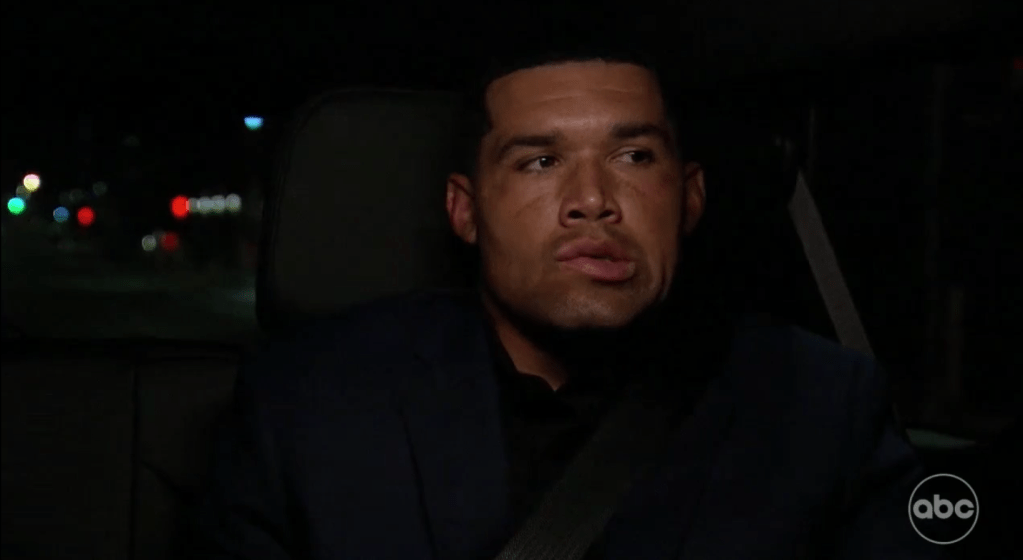 But hey, the good news is that means his DMs are open.

Next week is the Men Tell All special where we’ll watch a bunch of dudes rehash all the drama we just saw. Or you could re-read my recaps. Then it’ll be back to finishing off the season before Christmas and just in time for Clayton’s season so premiere on January 3rd. There’s no rest for the wicked.

The Cool Table Has a Podcast Now!@thecool_table
1.0K Following 987 Followers
Who's watching with me? Gonna start at 1:00pm CST #HarryandMeghanNetflix https://t.co/Wz5n31uLCR
4 hours ago
3
@deannareads I'll go down with the ship that Bloodmarked didnt have a fair shake bc of its release date
4 hours ago
I made an aesthetic thing and it took a minute and it's doing TERRIBLY. LOL FOREVER https://t.co/7nYkJ9vMo0
4 hours ago
@baskinsuns @pagemelt I've never seen any good discussions or good insight come out of bookstagram. They almost alw… https://t.co/51anLn7rxo
4 hours ago
2
Can’t wait https://t.co/dMqJEWhOVR
6 hours ago
2
Archives
Entertainment, The Bachelor, TV