If there’s one thing we love more than watching drama on The Bachelorette, it’s watching them rehash the aforementioned drama months later in front of a live audience on the Men Tell All special.

Give me that sweet, sweet hit of recycled anger in search of relevance going into Bachelor in Paradise. I need it.

You read that correctly. Justin made the cut over Andrew S. Make it make sense.

To address the many DMs I’ve received: yes, I’ve heard the rumors that Greg attended a prestigious acting school and was almost cast in two previous seasons.

You could tell me that Katie herself was Meryl Streep in prosthetics and a terrible wardrobe and I’d shrug.

If I cared about true love, I’d turn this show off and allow my husband to speak to me between the hours of 8 and 10 pm on Monday nights.

Michael A. Breaks Our Hearts

Before we could hop onto the hot mess express that is the Men Tell All special, we had a real quick detour to New Mexico to get our hearts broken.

One moment, Michael A. is on his production-approved facetime with his four-year-old son, James, using his dad voice and telling him that he’ll be home from his “work trip” soon. The next, his son was ripping his soul apart when he said, “Maybe daddy left because he doesn’t want to see me.”

For a dad who has experienced raising his child through the death of his mother, this was just too much. He couldn’t allow his son to believe that he didn’t want to be with him. There’s enough fear of abandonment that comes with the tragic loss of a parent, let alone thinking your remaining parent would leave you too.

He told Katie that she taught him how to love again, but he has to make his son the priority.

Katie was devastated that he was leaving because she saw a future with him, but she respected his choice to put his child first.

They kissed as mascara slid down her cheeks and he walked away with some really good b-roll for his inevitable season as The Bachelor.

I’m a monster who has no feelings, but my husband cried so it must have been sad.

Now that everyone but me has dried their tears from Michael’s exit, let’s mute the screen because the first 15 minutes of the Men Tell All were extremely obnoxious. 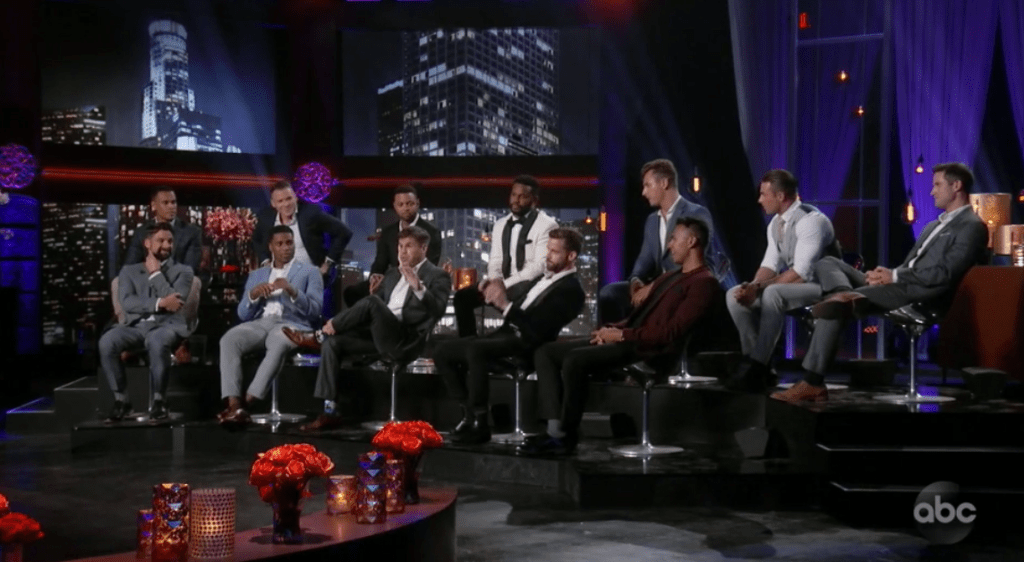 If you’ve ever wanted to hear what a few guys that no one knows from the season think about Hunter or Thomas, this is your moment. I literally couldn’t care less what James or Brendan think, but we all have our things.

There was a lot of yelling. Aaron is still all up in everyone’s business. Oh, and Hunter got a haircut so he looks less like Sharkboy now.

That pretty much wraps it up.

Redemption for Connor B.

First up in the hot seat was Connor B. who grew a beard to hide his ever reddening cheeks as he watched his journey on The Bachelorette playback.

You’ll remember Connor B. as the musician/math teacher from Nashville who wore a full cat costume on night one.

I’ll forever remember him as a truly horrible kisser. In my first recap of the season, I said it looked like he was lapping up milk. I stand by it.

Connor’s redemption arc came when a totally random (aspiring musician), gorgeous woman (who happened to be mic’d up) stood and asked to kiss him to prove that he’s not actually a bad kisser.

When I tell I you had a full-body cringe, I mean it.

She rated his full-face assault an 11/10, but there’s no accounting for taste.

The best part of this was how absolutely supportive the rest of the men were. Andrew S. chanting, “You’re not a cat, you’re a tiger!” is now my ringtone.

Next up was Andrew S. who sat through a sad retelling of his break-up that aired last week and then was fine. Like, he hopes he find love again but, he’s fine.

He liked her, it’s over, his DMs are probably blowing up. I’m not worried about Andrew S. at all.

Michael A. is My Everything

By the time Michael A.’s package was done airing, even Kaitlyn was crying.

Between losing his wife, being a single dad, possibly finding love, and then leaving that love behind for his son, it was a lot.

During his interview, Michael admitted that he still feels the same way as he always did about Katie. It sounded to me like he’s keeping that door open and I believe him.

But, since I’m a cynic, all I could hear was “behold your next Bachelor.”

Michael is kind, funny, sincere, and adorable. As Kaitlyn said at the end of his interview, we’re all rooting for him to find love. (As the next Bachelor.)

Men Tell All Gets Random 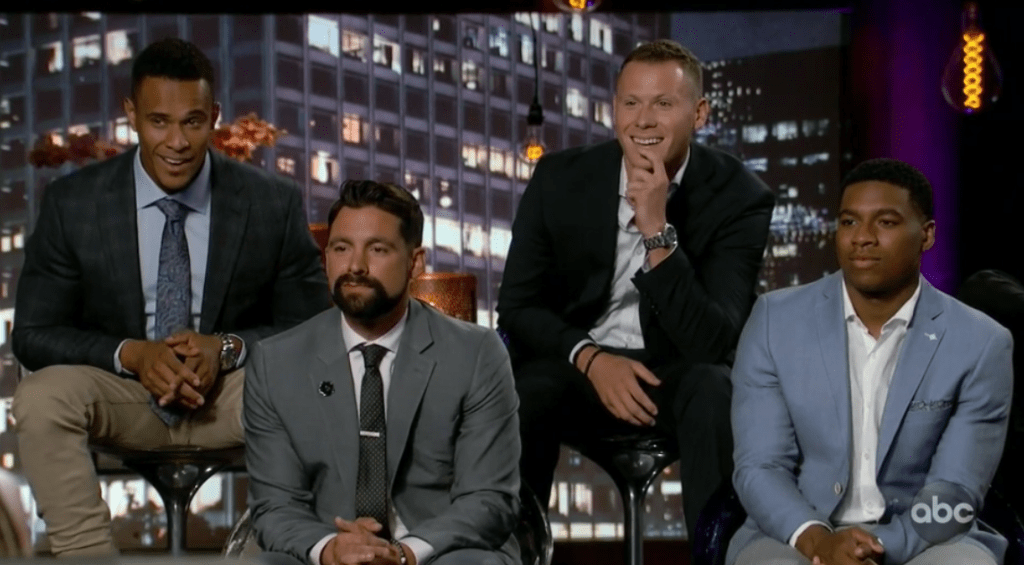 After Michael ripped our hearts out, the Men Tell All got really random.

They showed some footage that never aired of the men failing at a roast. Then they made us fall even deeper in love with Michael when they showed that he lost the WOWO challenge first and made some weird reference to his sexual stamina.

Finally, they rounded it out with an appearance from Jason Tartick to show video footage of his proposal to Kaitlyn. It’s nothing you haven’t seen if you follow Bachelor Nation at all, but it’s still great. 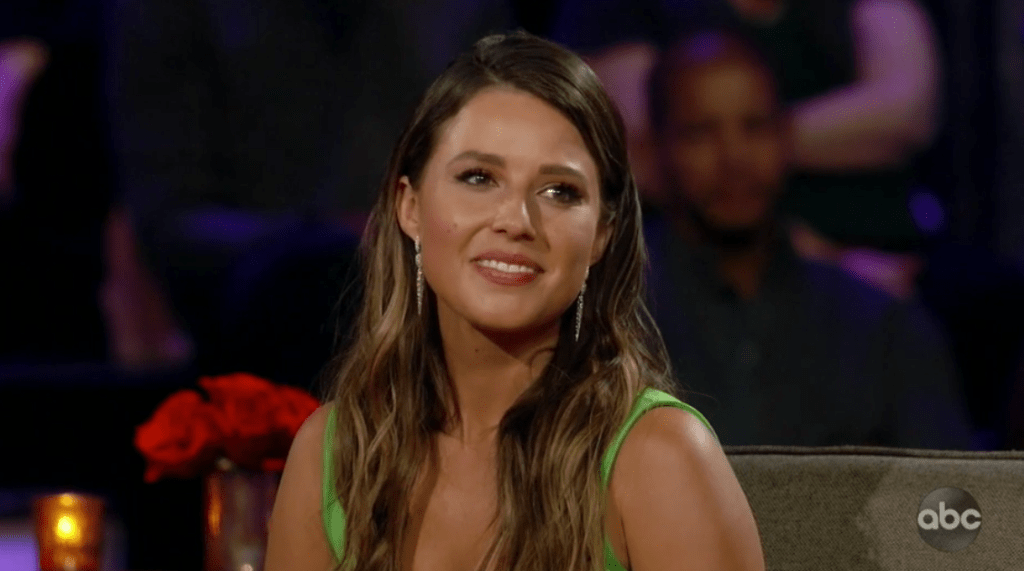 By the time Katie showed up to the Men Tell All I was struggling to keep my eyes open. Yes, because this show is on way past my over-30 bedtime, but also because I just don’t care if she calls Aaron by the wrong name.

This is my truth.

She said that she doesn’t have regrets about the season because everything happens for a reason. Then we sat through an awkward interview with Thomas over zoom with AirPods in his ears.

The episode essentially ended with Connor B. forcing the men to sing the words “this season has got me believing in bromance” over and over and then we watched bloopers. It was…something.

The trailer for next week’s hometown dates was wild. Blake’s family is trying to talk him into saying the “L” word. Justin is…Justin? I honestly have no idea why he’s on this show anymore. Oh, and Greg and Katie look like they get into a huge fight, and then Katie asks to go home. Meanwhile, all I was thinking about was how perfect Tayshia and Kaitlyn are as hosts. Chris Harrison who?

The Cool Table Has a Podcast Now!@thecool_table
1.0K Following 987 Followers
Who's watching with me? Gonna start at 1:00pm CST #HarryandMeghanNetflix https://t.co/Wz5n31uLCR
3 hours ago
3
@deannareads I'll go down with the ship that Bloodmarked didnt have a fair shake bc of its release date
3 hours ago
I made an aesthetic thing and it took a minute and it's doing TERRIBLY. LOL FOREVER https://t.co/7nYkJ9vMo0
3 hours ago
@baskinsuns @pagemelt I've never seen any good discussions or good insight come out of bookstagram. They almost alw… https://t.co/51anLn7rxo
3 hours ago
2
Can’t wait https://t.co/dMqJEWhOVR
5 hours ago
2
Archives
book review, Books, Bridgerton, Romance