Watching Clare navigate this season as The Bachelorette is like watching a car crash in reverse. You may know everyone survives it, but there are still limbs flying everywhere, and you’re bracing yourself for impact. In other words, it’s perfect reality television.

One way or another, Clare Crawley will not be our Bachelorette for much longer. How that happens and why is anyone’s guess…if you’re a really bad guesser because this episode gave it away.

I don’t know if Yosef (30, Alabama) was suffering withdrawal from his daily dose of hydroxychloroquine or something, but he was a ticking time bomb. He thinks Clare is selfish, classless, old, and unworthy of being the mother of his blessed future progeny. All of which he told her with a vein bulging in his forehead in barely smothered fury. Sounds like husband material.

Clare tried to de-escalate Yosef’s aggression by casually mentioning that her mother is dying, but he was like, “don’t interrupt me, woman. I’m appalled to be associated with you.” That’s around the time Clare stood up and started pointing her finger in his face. He yelled, “I expected way more from the oldest bachelorette in history.” So she pointed him towards the exit for good and shouted, “I’m 39 and single because I didn’t settle for men like that.”

Right about this point in the episode is when Dale sealed the deal. Not in the Biblical way, but that’s not for lack of Clare’s willingness. Dale is the only man who held her after she was shaken from her encounter with Yosef. She told Chris Harrison that she has fought alone her whole life and all she has ever wanted was a man to have her back. Sure, it’s that, but Dale could have arrived in a clown costume juggling small children and she would have been like, “He’ll be a great dad!”

There was a rose ceremony after that but Dale is still here so no one else matters.

The next day, former bachelorette, DeAnna Pappas arrived at Clare’s hotel suite to provide confirmation bias and smell Dale’s pants. I don’t know why Clare had Dale’s pants, but they sniffed them real good. Smelling dirty pants aside, it wouldn’t have mattered what DeAnna said, but when she admitted that, “When you know, you know,” Clare was like, “I KNOW!!!”

Clare is so over the whole thing that she skipped the day’s group date and instead made out with Dale for several hours during the “after-party.” I’m not exaggerating. She skipped a whole-ass date and hung out in her hotel room groping Dale instead. The rest of the men were furious with Dale and his sheepish grin, but what can they do about it at this point? It’s time to unionize, boys.

Time to Get Ghosted

Clare reluctantly took Zach J. (37, Utah) on a one-on-one spa date, but her heart wasn’t in it. Of course not, because her heart is in a 6’3″ former NFL athlete/Halloween costume model/Special Olympics ambassador. Did you guys just read that? Dale is a gorgeous, tall, accomplished, hot, younger guy who wants her and has access to free Halloween costumes. Stop wasting our time and let them do it already.

As for Zach J., he and Clare hung out for like half a minute in a dilapidated pool at the La Quinta where Clare leaned down for a kiss. Zach somehow missed the kiss signal which resulted in him grabbing at her neck aggressively. This, understandably made Clare uncomfortable, but more importantly it gave her the excuse she was looking for to go home and go to sleep. I hope Chris Harrison negotiated hazard pay because he’s the one who showed up to dinner to break-up with Zach on Clare’s behalf.

Did you feel that? There goes one more man in Clare’s path to Dale.

The last group date of the week was a comedy roast hosted by Margaret Cho. I don’t know who thought it was a good idea to put the most sensitive Bachelorette of all time in the position of being roasted by her boyfriends, but I respect it. Sadly, all of the men picked the one subject Clare could never laugh at. No, not her age, Dale. They made fun of Dale for everything from the fact that his face looks like the snake from Jungle Book, to his inability to stop talking about himself, and Clare was not having it. 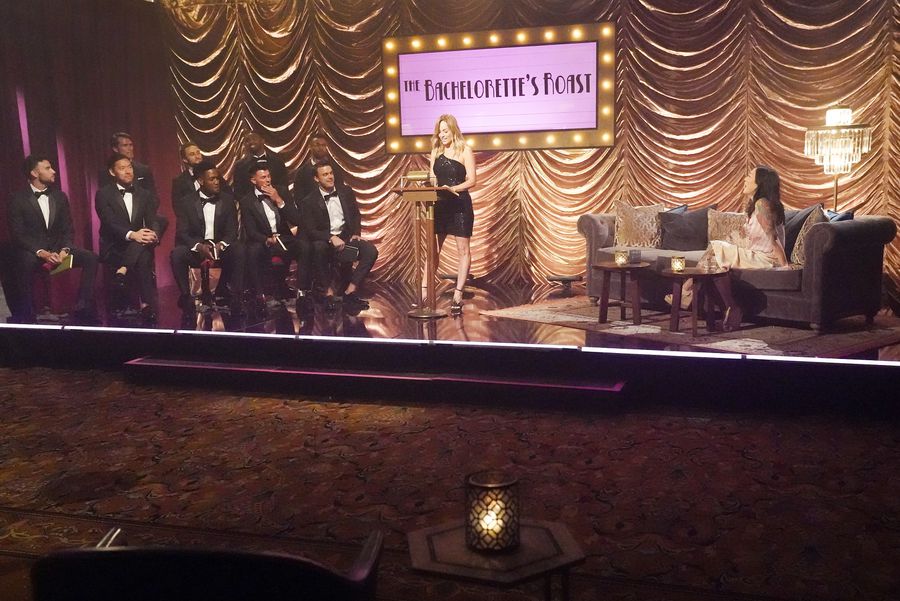 She spent the rest of the night questioning the men over their decision to make fun of Dale. Sometimes it sounded accusatory, but most of the time she was just fishing for information. So, like, does Dale, like, talk about me in his sleep? You know, subtle stuff like that.

Slowly, much too slowly,  the guys started putting it together that the only person she ever shows any interest in is Dale. Good job, fellas, we got a couple of real Enclyclopedia Brown’s on this season. What gave it away, her complete disgust at physical contact with any of you? Or was it when she chose not to hand out the group rose at all? Maybe it’s the fact that the only man who is safe going into the rose ceremony is, you guessed it, the future Mr. Clare Crawley, Dale Moss.

Someone call Lin Manuel Miranda to write the next episode. We need a revolution.

Truly, can we just call it a wrap, please? Clare is happy. Dale is happy. Everyone else is miserable. Haven’t we suffered enough in this, the year of our lord 2020?

Wait…was that…Tayshia Adams standing up from the pool to save the season in the credits for next week? And just like that, they suck me back in again.

There will not be a new episode of The Bachelorette next Tuesday, November 3, since we’ll be voting and/or in the fetal position waiting for election results. Instead, we’ll be back next Thursday, November 5, unless, you know, the world ends before then.

The Cool Table@thecool_table
1.0K Following 1.0K Followers
@jamiesrule @jamadoria @coolstorymere I know you know this, but I"ve had pixie cuts off and on since 1997 and m*n h… https://t.co/VsXyyN7PpC
3 hours ago
3
@LSULeslie @schizoreads I’ve legit never even heard of this
3 hours ago
@chels__ebooks Yes! Josh O’Connor supremacy! I watched this right after I got obsessed with The Durrells ❤️❤️❤️
3 hours ago
@maria_gb75 Keep him
3 hours ago
@baskinsuns AGREED. I love love loved that as a kid (and vowed to be able to do it so someone would love me)
3 hours ago
1
Archives
Entertainment, Pop Culture, TV