Want to know what Lil Jon and a tropical storm have in common? They’re both main characters on this week’s episode of Bachelor in Paradise.

Mother Nature was like, “Brendan, Pieper, and Demi are gone. We gotta up the drama on this beach or we’re going to get Katie Thurston level ratings.”

Last week’s episode of Bachelor in Paradise ended with Kendall running away from the beach because watching her ex Joe and his new girl Serena cuddle made her want to die. She was all, “We’ve only been broken up for a year and a half, so it’s relatively new.”

Relative to what, the beginning of time?

Anyway, this episode opened with her still being upset. Personally, I’m more upset that she’s in a situation-ship with Ivan and no one told us, but that’s just me.

After a quick but useless pep talk from bartender Wells, Kendall decided it would be a good idea to talk to Joe. I understand that it’s hard to find the right time to tell your ex that you’re still in love with him, but immediately after he just got done telling his new girlfriend that he’s falling in love with her isn’t ideal.

Joe delicately asked her why she came to the beach and Kendall essentially said that she went to the beach because she’s still in love with him. This was her “Pick me, choose me, love me!” Meredith Grey moment, and I get it because I’m half in love with Joe after watching this season too.

The music was swelling and she asked him the same question. Why did you come to the beach, Joe? He sighed and there was a pregnant pause filled with mature regret before he said, “Because I knew it was over between us.”

They held each other in a truly tragic last goodbye and Kendall’s heart broke into a million pieces. She left the beach for good after a short goodbye to Ivan (make it make sense) and sobbed in the getaway car.  This was true blast-Olivia-Rodrigo-and-eat-ice-cream-in-bed heartbreak. Anyone who has ever been there knows what I’m talking about.

Meanwhile, Joe got comforted by his new love, Serena at the beach.

I don’t know why Kendall put herself through all of this, but it was riveting television, so thanks.

In the words of America’s second-favorite celebrity named Lil Jon (the first-favorite is Little John from Disney’s Robin Hood, obvi), “I do love the drama.” So here come two more men to the beach despite basically all of these people being wifed up.

Ed and Demar (Clare/Tayshia’s season) looked good walking shirtless down the beach, but the only thing I can remember about either of them is that time Ed showed up to Chris Harrison’s hotel room in the middle of the night on accident.

Demar made eyes at Maurissa, which she was feeling, but ultimately he asked Chelsea on his date. Good thing, because if you come for Riley and Maurissa’s happily ever after, you have to go through me first.

Ed took Natasha out on his date and it was fine, but really I’m just happy she’s still getting air time.

Apparently, all the time they’ve been logging in the boom boom room didn’t count, so it’s finally time for Kenny and Mari to get a one-on-one date.

You guys, I’d rather watch grainy night-vision footage of those two doing nasty things in that communal champagne room any day over this date.

They made tacos on each other’s naked bodies.

But, like, not in a hot way, if such a thing exists.

Listen, I can go to town on a taco bar. I’ve never seen a Tuesday night that wasn’t better with a taco in it. However, no one, and I mean no one, needed to see corn tortillas and carne asada delicately placed next to Kenny’s nipples while Mari rubbed sour cream on his leg.

I’d rather look at Trapper Keeper tattoo sleeve than watch this date.

It was that bad.

After they washed off the salsa bar from their nether areas, they had (more) dinner and told each other that they’re falling in love.

Like, cool, I’m happy for you, but I’m not ready to move on from the taco trauma.

Back on the beach Maurissa was still thinking about shirtless Demar and it was causing her to question her fully established relationship with Riley.

I get it, that’s how I feel every time I see Chris Evans. My happy and fulfilling marriage with three children or throw it all away on a whim for America’s butt? It’s a toss-up.

I’m kidding mostly, but that’s basically where Maurissa was in her head. I mean, sure, Demar didn’t even ask her on the date, but the possibility got her thinking about every doubt she has.

It was a classic case of a man who thinks he’s being clear about his feelings by way of his actions and a woman who needs words of affirmation.

Thankfully, Riley and Maurissa were able to discuss how she was feeling which led to a really moving and vulnerable conversation about Riley’s childhood.

There was honesty, tears, raw emotion, and, finally, a confession of love.

These two feel like end game and it’s beautiful to watch.

Not as beautiful as Chris Evans though.

Bachelor in Paradise Has a Storm Brewing 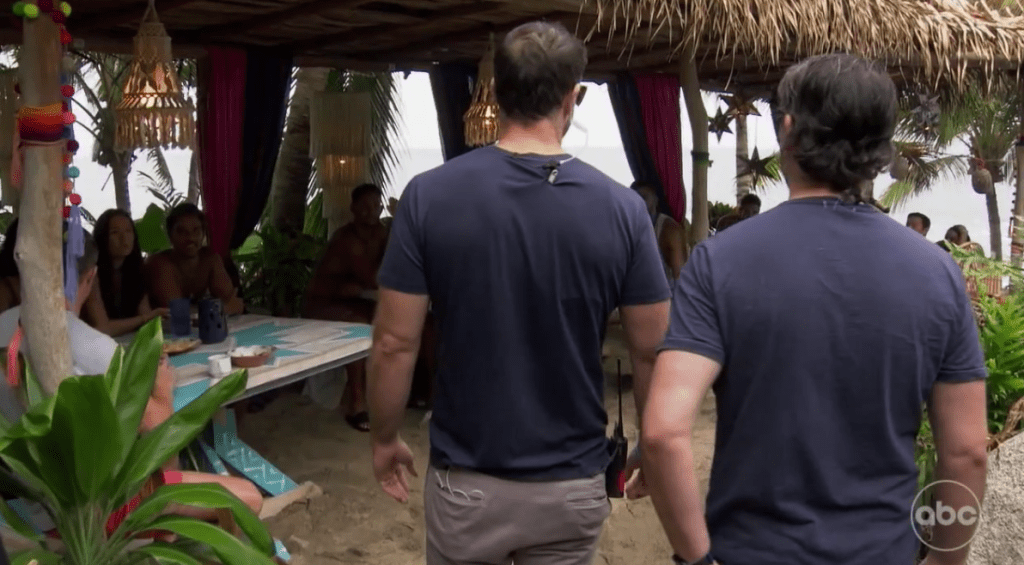 The next morning the group was gathered around getting ready to start their day of filming when production broke the third wall.

It turns out there was a huge tropical storm coming and they needed to pack their bags and evacuate paradise immediately.

Suddenly everyone was running around covering day beds in plastic wrap like they weren’t already biohazards and stacking chairs like a youth group after service. 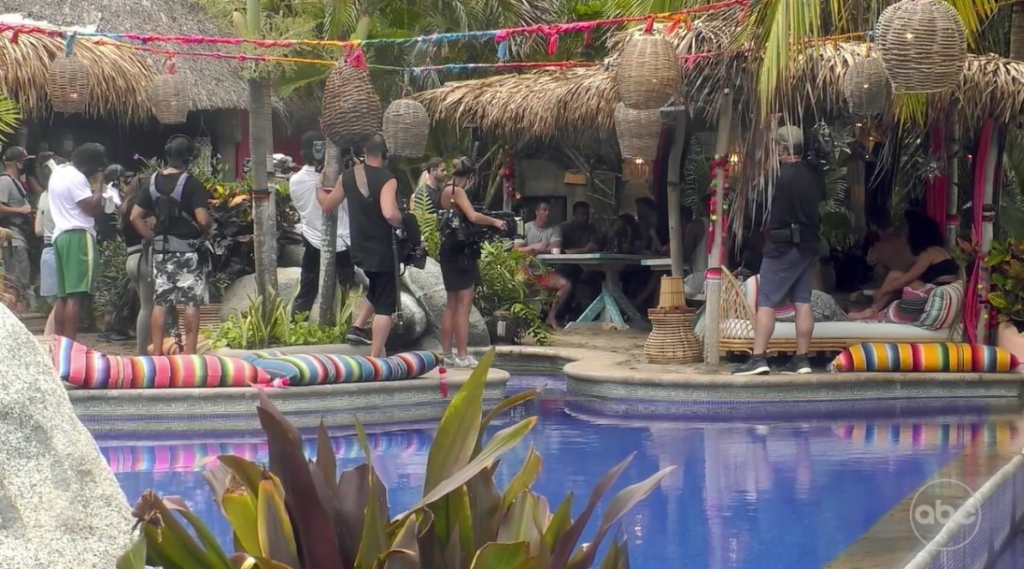 Meanwhile, the cast was being separated into shuttles and saying their last goodbyes like they weren’t going to see each other in a hotel down the street in a couple of minutes when they leave the dilapidated hovel they’ve been staying at.

Now, I realize in hindsight that we all would have heard about a devastating tropical storm in Mexico that endangered the lives of American reality TV stars, but I still fell for it.

There was lightning, a few vases broke, and then…it was over…and they just…walked back on the beach and started filming again?

I haven’t been this let down since Colton came back from the fence jump. 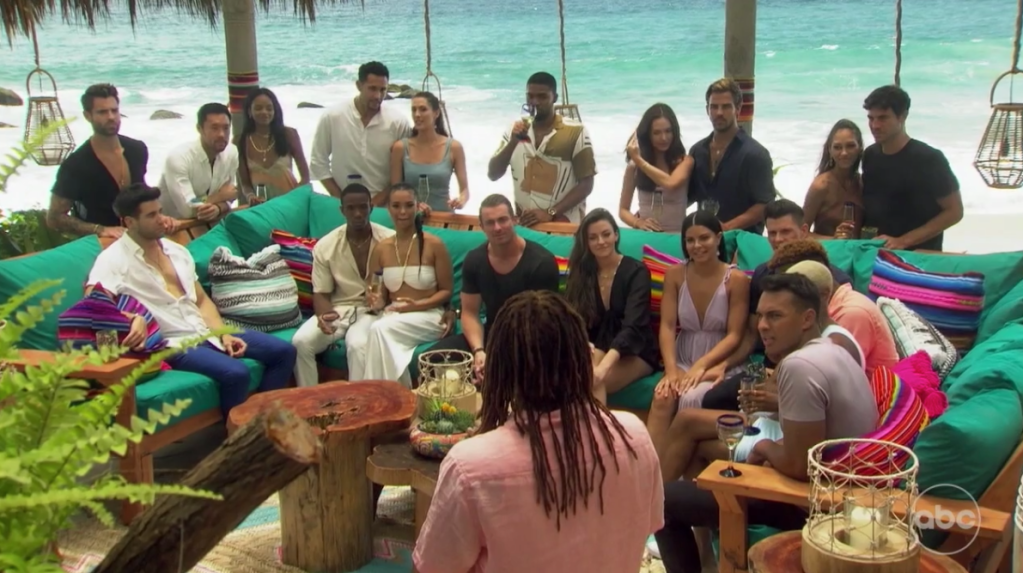 After the cast sauntered back on the beach like they hadn’t just wasted an entire promo teaser and 10 minutes of the episode; it was back to normal. As Lil Jon explained, they were going to have a daytime cocktail party.

The first conflict came between Tia, Blake, and James. You know, because Tia’s heart wants James but, her vagina only tingles for Blake.

The questions that statement arises are innumerable.

Based on their conversation this episode, my guess is that Blake and Tia have been flirting in DM’s for months.

My theory is that the chemistry has reached a boom boom room level boiling point and she knows she’s about to tingle her way to a bad decision.

Instead of stopping to think, she decided to question his sincerity for not being ready to fully commit to her after one date.

Blake was looking at her like she’d completely lost her mind. As far as he knew they were good up until that very moment. It was totally unhinged and wonderful.

Then there was James over there just being emotionally available with his shellacked hair waiting for his moment to shine.

What’s a girl from Weiner, Arkansas to do?

I guess we’ll have to wait to find out next week; because, there’s no way we’re getting a rose ceremony before the end of this episode.

Instead, we got to watch Aaron lose yet another budding relationship to a different man. First, it was Tammy, then it was Becca. This time it was Chelsea who is making out with Ivan on the daybed directly in Aaron’s line of sight.

First, Ivan moved on from his relationship with Kendall (WTF) and is now making out with Chelsea on the beach? Make it make sense.

Second, if we know anything about Aaron at all by now it’s that he’s about to pick a fight.

This episode ended right when it looked like Aaron and Ivan were about to break out into a full-on brawl in front of the bar. I swear, if Wells has to break up a fight next Tuesday night I will name my child with Chris Evans after him. See you back here next week like usual!

The Cool Table@thecool_table
1.0K Following 1.0K Followers
@jamiesrule @jamadoria @coolstorymere I know you know this, but I"ve had pixie cuts off and on since 1997 and m*n h… https://t.co/VsXyyN7PpC
2 hours ago
4
@LSULeslie @schizoreads I’ve legit never even heard of this
1 hour ago
@chels__ebooks Yes! Josh O’Connor supremacy! I watched this right after I got obsessed with The Durrells ❤️❤️❤️
1 hour ago
@maria_gb75 Keep him
1 hour ago
@baskinsuns AGREED. I love love loved that as a kid (and vowed to be able to do it so someone would love me)
1 hour ago
1
Archives
Book List, Books