The Bachelor‘s Peter Weber has whittled down his plethora of potential partners to less than a handful.  That’s more than I can say for the average 28 year-old man on a dating app, so quit judging. JK – it’s time to meet some disgruntled future-in-laws at hometown dates. Judge away.

Hannah Ann’s (23, model) hometown date began by affirming archaic gender norms in Knoxville, Tennessee. Oh  Bachelor, please change. Apparently her dad (affectionately nicknamed “Ranger Rick”) has drilled it into Hannah Ann’s head that she needs a “tough man,” so she took him to the local Channel the Flannel bar – that’s its real name – to teach him how to throw an axe. I’ve been in romantic relationships with a variety of men since before Hannah Ann could speak in full sentences and I can count on zero fingers how many times I’ve needed one to throw an axe for me. Maybe modeling for Sonic Drive-Thru commercials is more dangerous than I realized. 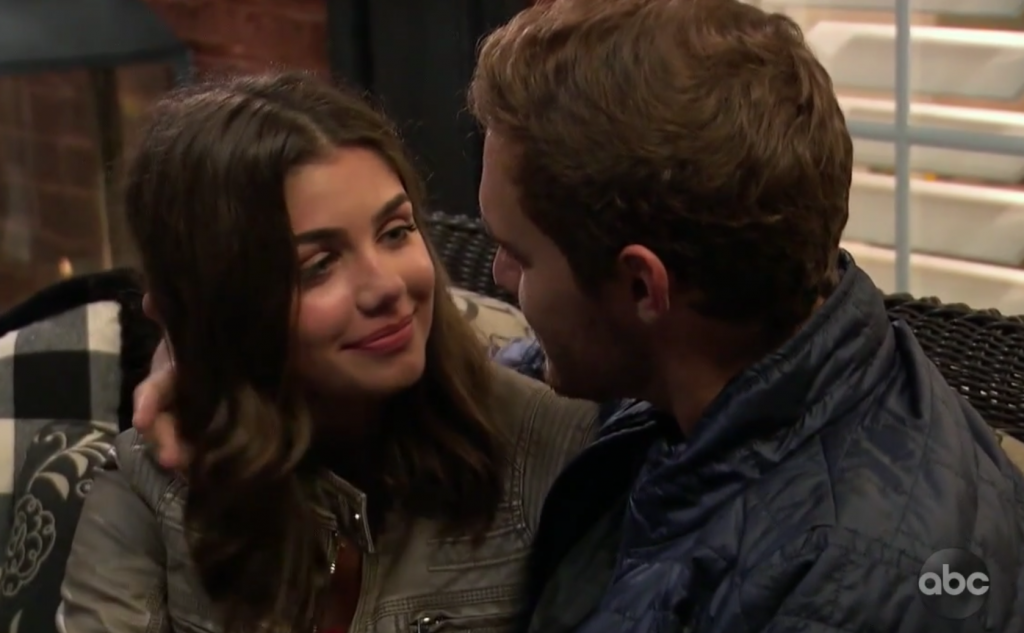 Hannah Ann has a lovely family who welcomed him with open arms (mom and sister) and a heavy dose of skepticism (dad). Peter told both of her parents separately that he was planning to tell Hannah Ann that he’s falling in love with her. Her mom was cautiously supportive, but Ranger Rick wasn’t having it. He sat up in his chair and told Peter, “Do not say that word to her unless, wholeheartedly, that’s what you mean and that’s what you’re going to do. Don’t even waste a word.” Peter was like, “I hear and I respect your opinion.” Then he promptly did the opposite of what her dad asked. Oh, I get why he needed to learn how to throw an axe now.

Despite myself, the scene of Hannah telling Peter that’s she’s in love with him and him whispering back, “say it again,” while the music swelled and they kissed in the rain was perfect. Full sigh inducing perfection. How does The Bachelor suck me in every single time?

Kelsey (28, Professional Clothier) planned a perfect hometown date for Peter in Des Moines, Iowa – visiting a winery. Ah, yes, the world renowned Iowan wine country, that makes perfect sense. It’s not in any way her fault that Kelsey the champagne face was repeatedly accused of being an alcoholic this season. However, the irony was not lost on me to see them stomping grapes, concocting the perfect blend and then sipping the fruits of their labor. With wine stained lips, Kelsey told Peter that she’s in love with him, which led him to kiss her with increasing loud smooching sounds. Might want to pour another glass, Kelsey. 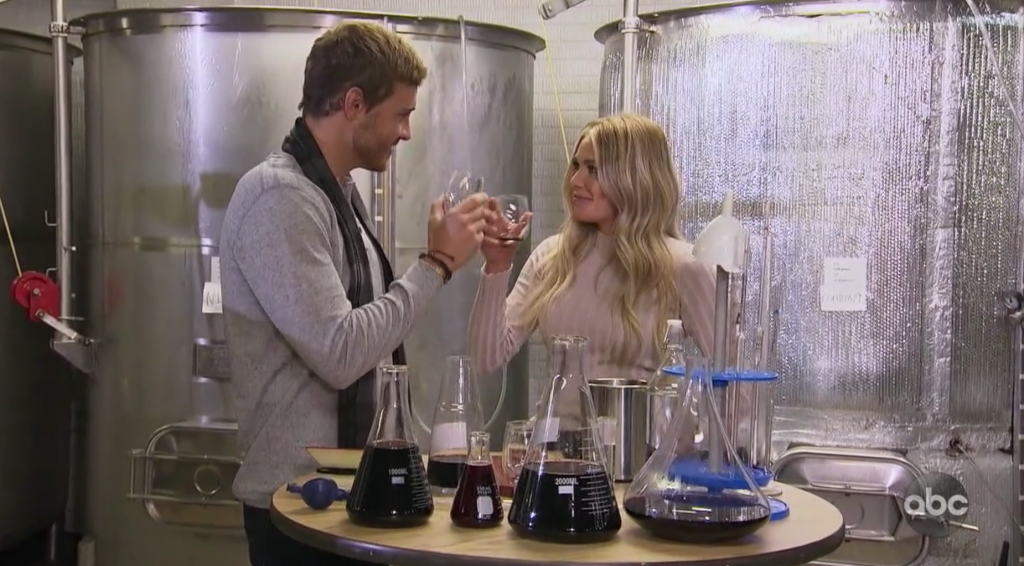 At family dinner that night, Peter met Kelsey’s gorgeous sisters (who had her same nose – I know, I’m surprised too) in their magazine-worthy home. They drank more wine and ate Kelsey’s favorite food, crab rangoon. Peter pretended he’d never heard of it, but everyone knows they sell it at Panda Express. Then after a few conversations, Kelsey’s mom said that she’s never seen her act this sure about anyone in her entire life. It’s so sweet when even the parents don’t notice the Stockholm Syndrome kicking in.

Madison (23, Foster Parent Recruiter) has never been happier than she was on the campus of Auburn University in Alabama. The first thing to make her smile as a video message from alumnus Charles Barkley telling Peter not to mess up. Then, Auburn Head Coach Bruce Pearl told them that he hired her father because he’s an exemplary man. Good luck living up to that impossible standard, Pete. Madison is intense, sure of herself and more interested in destroying Peter at basketball than in kissing him. Wait, is she my favorite? 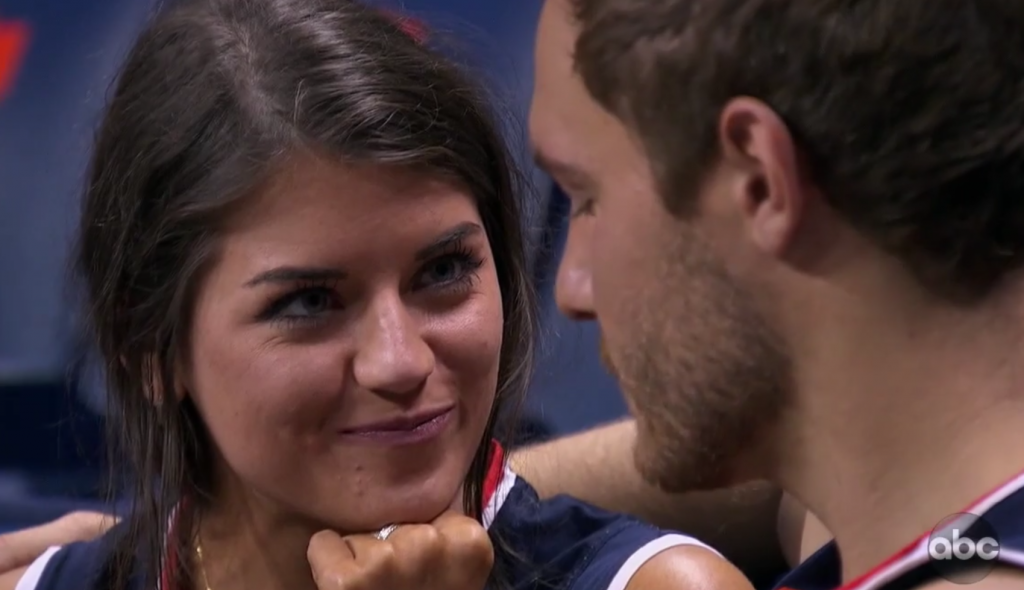 Madison’s family were exactly who’d you expect a wholesome southern baptist family to be. They toasted with sweet tea, took turns saying kind things about Madi, and held hands while they said a prayer. Peter was looking around like, “When does the German singing start?” Unsurprisingly, they were also extremely protective of their girl. They repeatedly asked her how Peter felt about her faith, the decisions she’s made for herself, and called her pure. Oh, I got it – she’s a virgin. Peter four-times-in-a-windmill Weber never stood a chance.

As he was leaving, Peter told Madison that he’s falling for her. Sounds familiar. Only this time, Madison couldn’t bring herself to say it back. In the car ride home he doubled down and told the camera, “I love Madison and I just know she’s on that same page with me.” Did he even watch Colton Underwood’s season before he left or no?

Victoria Can’t Escape the Past

Victoria (26, Medical Sales Rep) was excited to explore her hometown of Virginia Beach, VA with Peter and her black lab. They took old timey pictures in ill-fitting costumes, and then attended a surprise concert. Nice call-back, Victoria; maybe singing along to Hunter Hayes will erase the memory of dancing to your ex, Chase Rice. But, wait, what’s that? They’re singing and dancing to the lyrics “I don’t want easy, I want crazy.” Be careful what you ask for, Petey.

As he was leaving for the next part of his date, Peter was stopped by a blonde with a blurred out face. Peter recognized her as an ex-girlfriend, but she wasn’t there to talk about meeting his mom at the Guess store on Rodeo Drive. She was there to warn him away from Victoria. She told him to be careful and that she ruins relationships. If you’ve been following any Bachelor rumors she is said to have dated many married men. Have I mentioned that I love this show yet today?

Peter showed up to Victoria’s family home on a mission. He was going to address what he heard, head on, and then they’d have a mature conversation about it. LOL, what show do you think you’re on? Victoria lost it. She pulled out every gaslighting technique she had in her arsenal to make him think he was insane for questioning her. She cried, she told him she was going to admit her feelings, she questioned his motives. But, for once in his life, tears didn’t convince Peter Weber. He got back in the SUV of doom and drove away without meeting her family. I honestly didn’t know he had it in him.

Put Us Out of Our Misery

Victoria showed up at Peter’s hotel room the next day but this time she was more successful. She reiterated that she’s falling in love with him and then she told him that the ball is in his court. You know what she didn’t do? She didn’t address the rumor’s that the Peter’s ex spread. But, Peter can only make good decisions so many times in one season so he told her he wasn’t ready to send her home yet. Shocking.

No, Please, Put Us Out of Our Misery

Finally, it’s time for the Rose Ceremony. Surely Peter will make a good decision for once in his life, right? 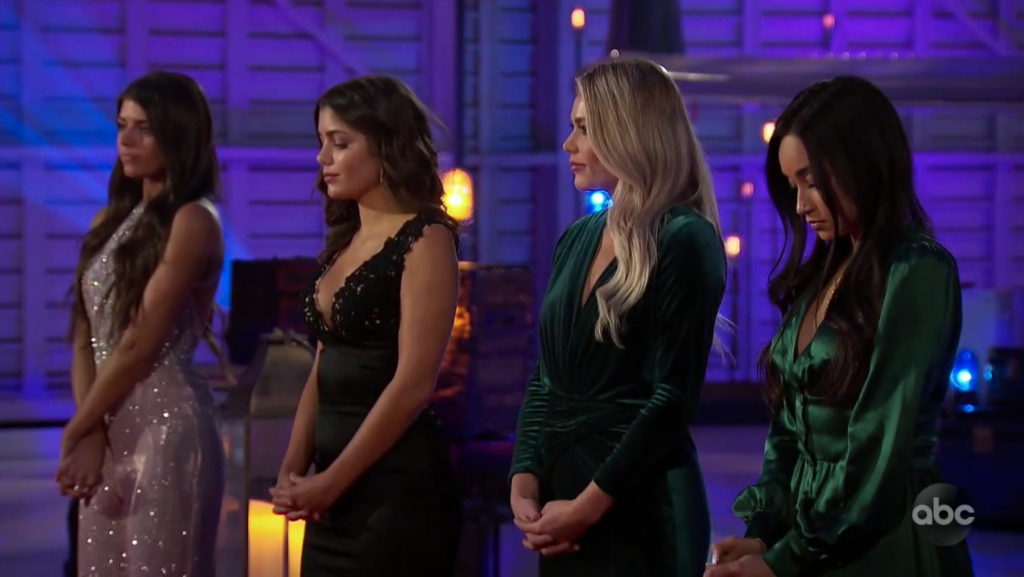 The second rose when to Madison, duh.

But that third rose. Oh, boy. It went to none other than crazy-face, Victoria. Why, Peter. WHY?

Coming Up Next Week

Kelsey handled her exit with poise; however, this episode was not complete. Madison stopped Peter before he could leave the airplane hangar where they held the rose ceremony, but also before we could hear why. Was she going to tell him she’s a virgin? Was he going to pretend he didn’t care?

The scenes from next episode show that we will get the fantasy suites next week, which is…surprising. In recent seasons, the Women Tell All episode has aired before the fantasy suites. Does that mean something huge happens on the episode? I hope so.

I’m not totally comfortable making an end of the season prediction yet, but if I had to, I’d say that Peter wants it to be Madison, but Madison leaves on her own. I really hope I’m wrong because that sounds boring AF.

What do you think of Peter’s final three? Who do you think will be the last woman standing? Why do I love this show so so so much? Let’s talk in the comments.

The Cool Table@thecool_table
1.0K Following 1.0K Followers
Yesssssss https://t.co/rGaJC4TAJ4
7 mins ago
1
Latto Brought Big (Villain) Energy to #TheBachelor for episode two of Zach's season. https://t.co/qyqmqEZIpH
10 hours ago
1 4
@pagemelt I know nothing about them but it's a good assumption since the album is titled Dear Wormwood. I have so m… https://t.co/rXXSQbWwlG
12 hours ago
2
@pagemelt isnt the whole album based on the screwtape letters? RED FLAGs
12 hours ago
1
@MrsKowski unfortunately yes
12 hours ago
Archives
Books, Current Events, Pop Culture, Raves