What do Hilary Duff, Ziwe, ADHD, and a giant yacht have in common? They’re all the main characters on this week’s episode of The Bachelor.

I mean sure, Clayton is…there. And okay, one of the women humps him at a child’s birthday party. Fine, you’re right there’s also drama about one of the remaining 22 women having a friends-with-benefits situation waiting for her back home.

But mostly it’s the Lizzie McGuire nostalgia for me.

It feels good to be back

I don’t know about all of you but it feels good to see a bunch of women gathered on the Bachelor mansion balcony screaming a medical salesman’s name in unison. 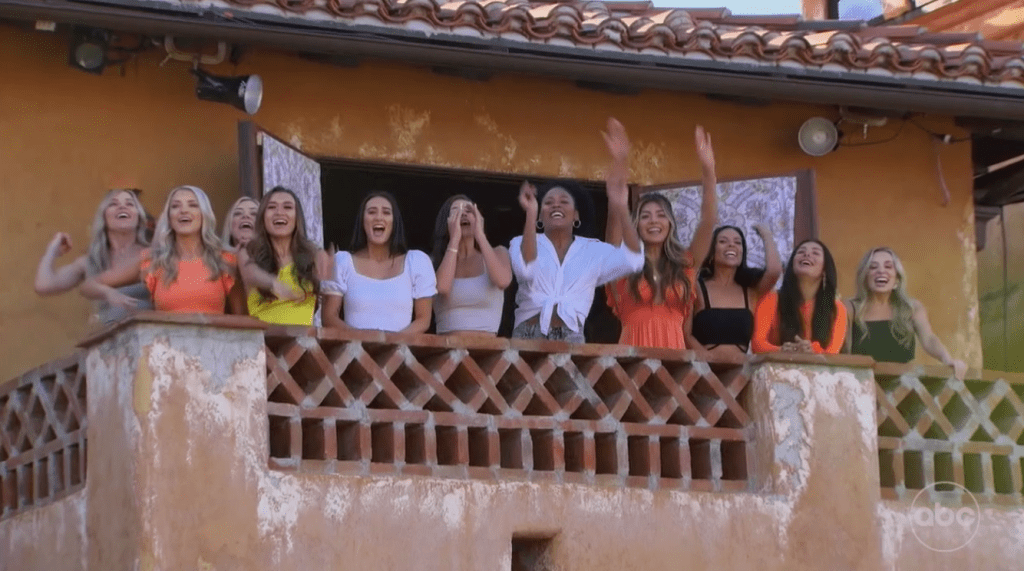 This episode opened with host Jesse Palmer introducing himself to the women and reminding them that he was once the Bachelor himself. They all looked appropriately impressed and asked if he’s happily married now. He is, of course not to the woman he chose back in 2004, but still, he’s off the market and not a threat to Clayton’s domain. We get it.

Jesse handed out the first group date of the season to the group and faded into the background, just the way this show likes it. 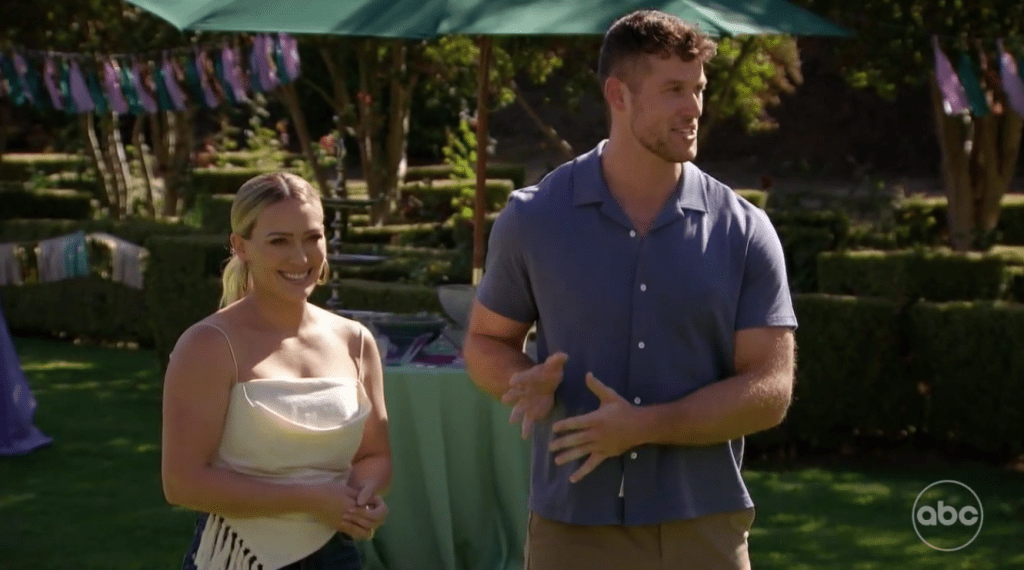 Ten women (Teddi, Ency, Melina, Gabby, Kira, Mara, Sierra, Genevieve, Serene, and Cassidy) were invited on a group date to a mansion where they were told to expect a date that “dreams are made of.”

Not their dreams. That would be too easy. Nope, they’re in charge of throwing a party for some kid named Maya that Hilary Duff inexplicably cares about.

I have no idea who Maya is related to in order to get this gig, but good for her.

Anyway, Hilary Duff is magical and really wants us all to know that Clayton will be a good dad.

We get it, Hilary, now make these women bake cakes and dress up like clowns.

While nine of the women did just that, Cassidy was like, “I don’t care what anyone says, but screw the kids.” That’s a direct quote. And then she dragged Clayton to the pool where she proceeded to hump him.

The rest of the women didn’t know exactly what was going on, but they knew she kept stealing their collective man and being lazy AF so the target is now firmly on her back.

Cassidy could not care less. She spent the entire party talking to Hilary Duff and telling the children attending the party that she spends “as little time around you small people as possible.”

Then she dropped Maya’s cake on the ground and humped Clayton by the pool again.

I’m not saying I’d invite her to my kid’s party, but I wouldn’t mind having her at one of mine.

Things only got worse at the after-party. I mean, not for Cassidy, she’s living her best life, but for everyone else.

Clayton had good conversations with Serene (such loud kissing sounds that I muted the screen) and Teddi (he told her that she doesn’t have anything to worry about) but Cassidy wasn’t worried.

In fact, the other women confronted her for not helping at the party and she was like, “I’m simply not going to apologize for not hanging enough streamers” and then she told them that the date rose is hers.

They hate her guts, but Clayton is a dummy dum dum who doesn’t see a trap when he’s walking into one, so she’s not wrong.

She got the date rose and the first villain edit of the season.

Susie gets the first one-on-one date

I don’t know where this budget has been, but Susie not only got the first one-on-one date of the season, she also got the first helicopter ride to a private yacht.

I’m sure Clayton is great, but Susie looks like the perfect mix of Hannah Brown and Debby Ryan, has traveled the world, and has a great personality to match her perfectly adorable face. Plus, she shared her sad backstory about caring for her critically ill father. Oh and she’s a former beauty pageant queen who is friends with Caelynn Miller. 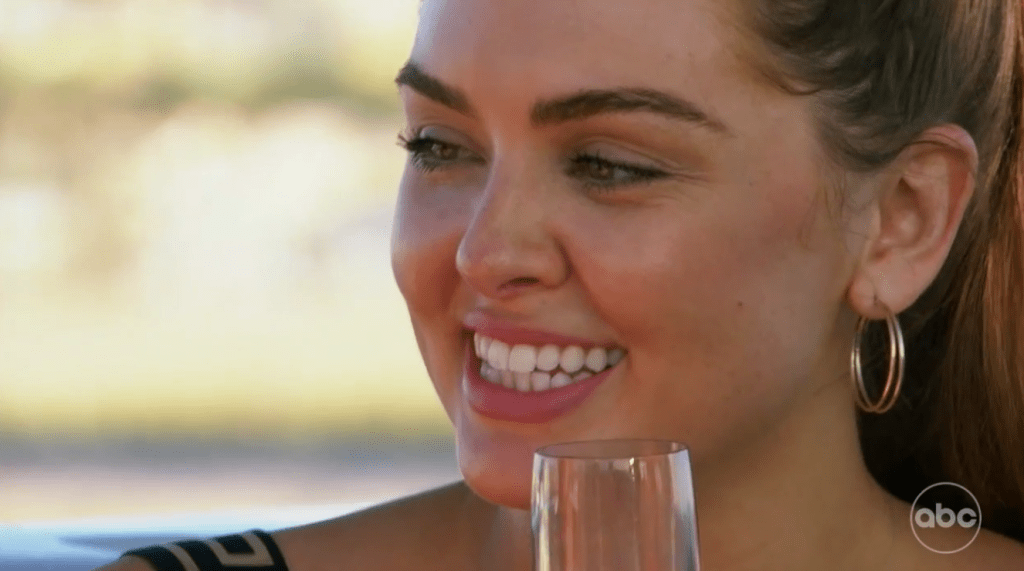 Anyway, they rode on a helicopter, hot tubbed on a private yacht, swapped life stories over dinner, and she accepted the date rose while Amanda Jordan serenaded them at a private concert.

Speaking of bait, comedian Ziwe whom I instantly recognized from her genius work on Baited with Ziwe, hosted the second group date. It mostly consisted of making Marlena, Elizabeth, Kate, Sarah, Lyndsey, Rachel, Tessa, and Shanae play Never Have I Ever and compete in an obstacle course.

Ziwe is best known for cornering people with pointed questions that they can’t answer without showing their (usually racial) biases, so I fully expected her to come for Cassidy’s BFF Shanae who apparently calls herself Shanae-nae when she’s being aggressive.

Alas, she let that one speak for itself and only asked them if they’ve ever cheated or faked an orgasm (yes and yes across the board).

Then Sarah won the obstacle course despite Shanae physically pushing women out of the way and there being an actual Olympian competing (Marlena).

These after-parties are the worst 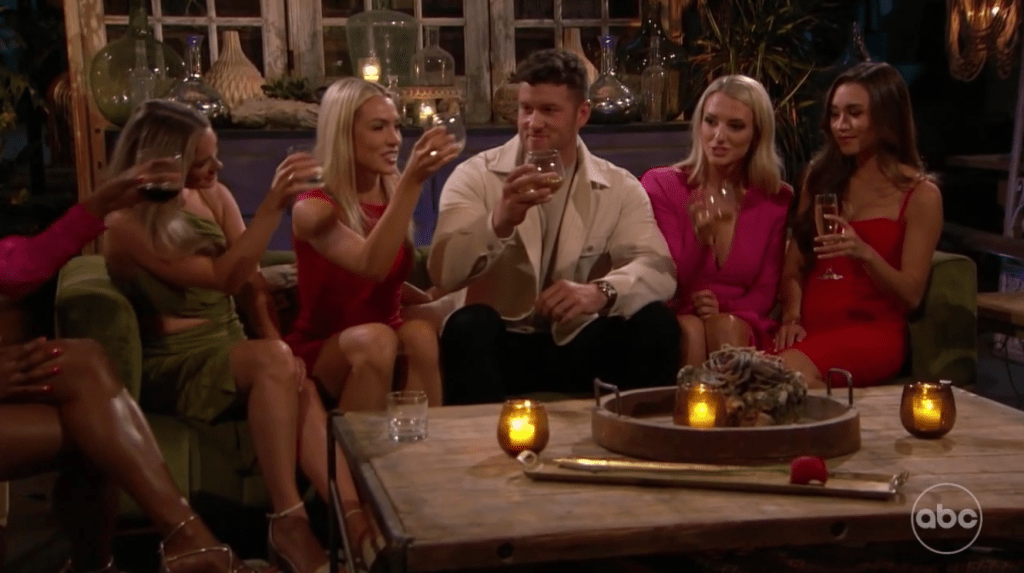 That night, Clayton furthered his connection with Sarah, turned down Marlena’s offer of a foot race, and reassured Rachel that she isn’t friend zoned.

Oh and then Shanae used her time with him to tell him that Elizabeth is two-faced. As we’ve established, Clayton is a dummy dum dum who doesn’t know what he’s doing so he believed her and confronted Elizabeth about it.

Elizabeth assured him that everything is fine, but then she went directly to the source for a conversation

When Elizabeth and Shanae sat down next to each other, my six-year-old happened to walk into the room. She saw them sitting together and yelled, “Oh my gosh they look so much alike! Are they twins?!”

Then my 11-year-old asked if they only cast beautiful women and stupid guys on this show.

Thus a recapper is born. 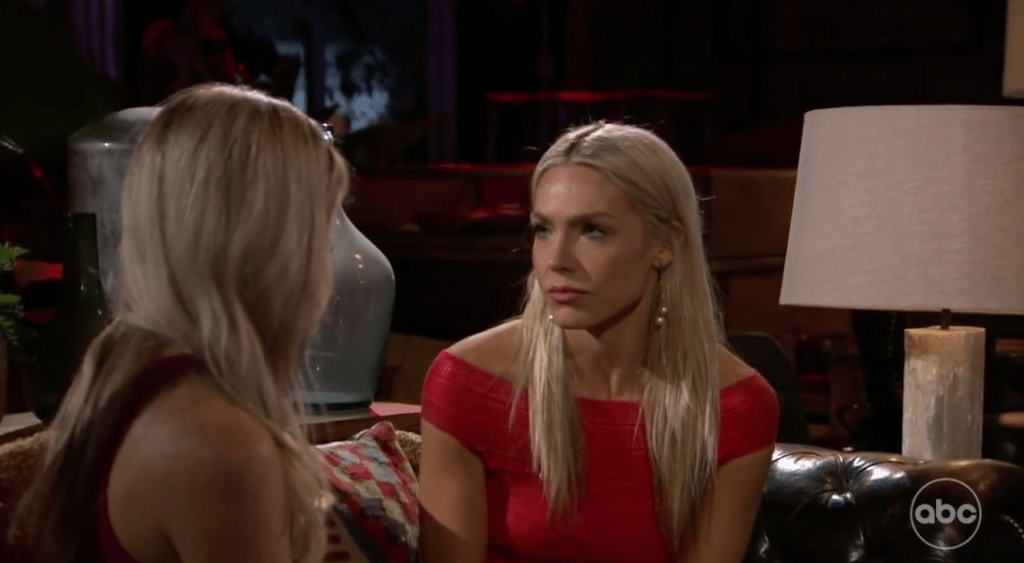 Anyway, Elizabeth told Shanae that maybe the reason she was perceived to be ignoring her is that she has ADHD with an auditory processing disorder so it’s hard for her to listen to two people talk at once. They hugged it out, but this drama isn’t over.

Clayton came back, gave the rose to Sarah, and then ran for his life while Elizabeth and Shanae kept arguing.

Shanae is obviously in the wrong here, so the rest of the women are decidedly team Elizabeth. That didn’t stop Shanae from leaving the date in a hurry while mocking Elizabeth’s neurodivergence. 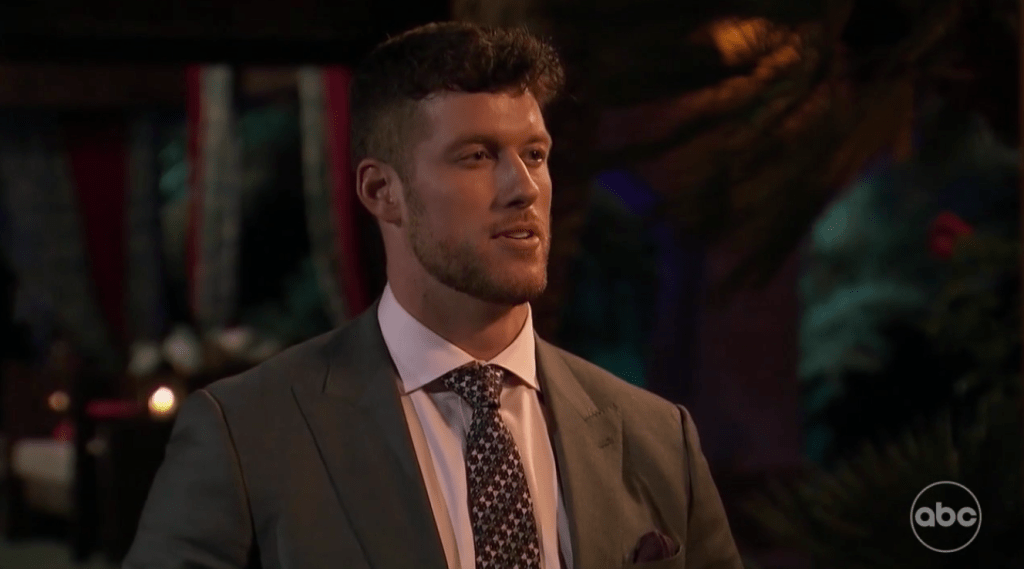 If you thought the fighting would stop in time for the cocktail party, you vastly underestimate the depth of these women’s boredom after a week locked in the mansion.

Yep, Shanae and Elizabeth are still fighting and Shanae is still being shockingly insensitive about Elizabeth’s medical diagnosis. Even Cassidy was like, “Woah, that’s too far lady,” so you know it’s bad.

Speaking of Cassidy, she was riding pretty with her date rose and a solid connection with Clayton. Mostly because Clayton seems like the kind of guy that will do what he’s told and Cassidy isn’t afraid to speak her mind. But then Sierra pulled Clayton aside and told him that Cassidy has a man waiting for her at home.

Technically it’s her f**k buddy who said he would wait for her to get back from the show so they can partake in “cuddle season.” Cassidy was facetiming him from the hotel right before meeting Clayton and we’re supposed to think this is very very bad.

Apparently, Clayton agreed because it threw him for a loop. How dare she have a backup man when he’s serious about dating 22 women at one time? How could she? He’s looking for marriage with one of two dozen women, the least she could do is live a life of chastity for all time.

To her credit, Sierra went directly to Cassidy and told her what she had done.

Cassidy was like, “Girl, I already have a rose, why bother?”

AND THE EPISODE ENDED THERE.

Honestly, how dare they?

The Bachelor will be back in two weeks with more drama and 100% less Hilary Duff. What do you think of the season so far? I think I kinda love it. Who am I?!?

The Cool Table@thecool_table
1.0K Following 1.0K Followers
RT @BlessAmysHeart: And @bethorne created a reading list/reference guide she mentions during the show. I say Beth is the brains, and I’m th…
14 hours ago
1
RT @BlessAmysHeart: Want to know what I believe now after leaving the #Evangelical church? Check out the latest episode of our #Exvangelica…
14 hours ago
2
@chels__ebooks if you can't HEAR and SEE it, you aren't fit to lick booktok's boots
18 hours ago
4
Archives
Entertainment, Hulu, Politics, Rants, TV