Matt James’ journey to find love begins on Monday, January 4th which can only mean one thing: it’s time to make superficial snap judgments about his 32 future ex-girlfriends. 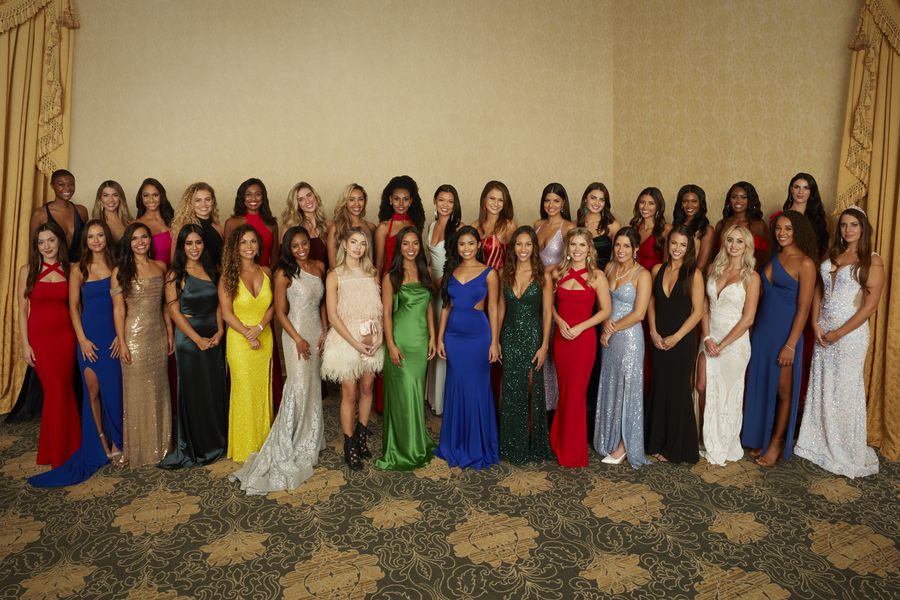 In seasons past, I’ve focused on giving the incoming cast unsolicited advice, but there are literally 32 of them and I can’t tell them apart.  My only advice would be to get a publicist, check their DM’s for messages from Tayshia’s leftovers, and avoid carbs before Bachelor in Paradise. Instead, I’m assigning them superlatives because The Bachelor is basically all of the worst parts of high school anyway.

I live for this.

Most  Likely To Be Unemployed

Listen, it’s still technically 2020 and unemployment is at an all-time high due to forces outside of our control, but that’s not what we’re dealing with when it comes to these three.

Alana (26, Toronto) is a “photographer” with a passion for traveling the world. I mean, maybe someone is paying her to take photos, but I have a feeling she has a selfie stick, a ring light, and the desire to live off of sponsored ads and airplane peanuts like Dean Unglert.

Kaili (26, Chicago) is a “hostess,” but one look at her socials shows she works full time on her abs. Too bad those don’t come with a retirement plan.

Then there’s Victoria (27, Los Angeles) who claims her job title is “queen.” Queen of getting on my nerves, probably.

Most Likely To Be Here For The Wrong Reasons

Does anyone sign up to be on The Bachelor for the “right reasons”? No. Is it still questionable AF that Cynthia Rowley’s 21-year-old daughter is on this season? Beyond. For the record that’s Kit (21, NYC) who lives at home, with her famous mom, works as a fashion entrepreneur, like her famous mom, and hosts a podcast, with her famous mom. That just screams ready for a long term relationship and marriage.

Then there’s Mari (24, Maryland/Puerto Rico) who most recently represented Maryland in the Miss USA competition where she placed in the top 10. A gorgeous beauty queen with only 12k followers? I see that hustle, Mari and I respect it.

Most Likely To Be The Villain

If you’ve seen the trailer for Matt James’ season (embedded below) you know that Sarah’s name comes up a lot and not in a positive way. My guess is that it’ll be a classic Krystal from Arie’s season situation where she’s not there to make friends/speaks in a weird baby voice.

Nothing about Sarah (24, San Diego, Broadcast Journalist) screams villain at first glance, but she is a trained fire dancer who is very active on Tik Tok so I can’t trust it.

Most Likely To Pick A Fight

As an enneagram 8, I love a girl who fights for what she wants, or just fights because they’re quarantined in a hotel with 31 other women who want their man. My money is on these three to bring the drama.

Carolyn (30, Los Angeles) is a journalist who said, “Anyone who abuses their own power over others makes her livid.” Have fun sharing your boyfriend, Carolyn.

Then there’s Marylynn (28, Studio City) an event planner who is passionate about eradicating single-use plastic. Does that include the plastic on the other women’s bodies? Because then we may have a problem.

Finally, Sydney (28, Nashville) is an event planner who said if her family had to describe her with one word it would be, “opinionated.” Please, please, say those opinions aloud and with your mouth pointed towards the mic, thanks.

Most Likely To Be Sent Home Night One

Emani (25, Albuquerque) is a realtor whose biggest turn-off is instability. Oh, sweetheart, this is not the show for you.

Serena C. (24, San Francisco) is a flight attendant whose ideal date is getting dressed up and going out to dinner. So, not a group dates where they make you pillow fight on national television? Too bad.

Kimberly (28, Seattle) is an airline recruiter who has a solid “no dates at cemeteries” rule. There goes week two’s one-on-one date.

Finally, Rachael (24, Georgia) is a sweet southern graphic designer whose bio is so delightfully kind that I want to personally delete her application for this show and put her on OkCupid instead.

Most Likely To Be A Fan Favorite

There’s always a handful of women from each season of The Bachelor who the audience just adores. They’re not particularly funny, or sexy, but they immediately become America’s sweethearts. Based on their bios, that’s these three.

Serena P. (22, Toronto) is a low-maintenance publicist who has never been in love. Casandra (25, Newport Beach, CA) is a social worker who is kind, independent, and scared of the dark. Katie (29, Washington) is a Bank Marketing Manager who is fun, quirky, and has a popular TikTok page.

Are they going to be Matt’s pick? Probably not. Will we want to be their best friend? YEP.

Most Likely To Take It Too Seriously

You have to be a certain type of person to thrive on The Bachelor. You have to be fun and easy-going, but also take it seriously enough to fall in love. Too much in one direction or the other and you over-correct. I think these five women are the most likely to lean into taking it too seriously. You know, the “you’re not here for the right reasons and I’m going to make it my job to tell Matt James that at every moment” type. Or the “I’m the only one who actually loves him” type. Basically, middle of the season fodder that will be super great for making memes.

Kristin (27, Virginia) did not leave her successful practice as an attorney to waste her time on your bullshit.

Bri (24, San Francisco) has a locked-down IG page, and is a communications manager for a “high profile social media company.” *cough* Twitter *cough* You think she’s going to risk her professionalism on this?

Jessenia (27, San Antonio) is a social media marketer who won’t let her man play on his phone at night, let alone date 31 other people at the same time.

Khayla (28, Durham, NC) is a healthcare manager who idolizes the queen of not having time for this, Rhinanna.

I may want to be them when I grow up, but this is not a situation they’ll thrive in.

Most Likely To Be There For The Vacation

This year has been long and terrible, and there are worse things I can think of then getting a free paid vacation in a four-star resort without the risk of getting covid. So, do I blame these women for more than likely only signing up to escape reality? Hell no.

Amber (30, Costa Mesa, CA) is a single mom of a 13-year-old son. Girl, after all of these months of distance learning, I’d run to that plane.

Alicia (24, NYC) is a professional Ballerina who probably hasn’t been allowed to work since March. Time to pirouette your way to some new followers and room service.

Chelsea (28, NYC) is a 6-foot tall runway model who can do anything she wants and I’ll still worship the ground she walks on.

MJ (23, Ohio) is a hair-stylist who appears to have literally never turned down an adventure when it is in front of her.

If anyone deserves a free vacay it’s these three.

I get it, these women have more than likely been recruited by casting based on their Instagram pages, but there’s no reason to lie.

Is Pieper (23, Oregon) and graduate student? Probably, but she’s also a model for at least three different agencies.

Magi (32, Ethiopia) is a Pharmacist, but she’s also a gorgeous model known for her natural hair.

Illeana (25, NYC) is a “health food developer” but really she’s a model represented by Wilhelmina Models.

However, the biggest con of all though is Corrine (22, Connecticut) who calls herself a “marketing manager” but what she meant is she runs the socials for her parent’s Italian restaurant and does Instagram modeling on the side.

Let’s get it straight: I’m not mad, I’m jealous.

Most Likely To Win

Finally, without reading a single spoiler, my money is on these three for the final three. For one thing, I’m pretty sure Matt James, America’s first black and biracial bachelor, likes light-skinned women. But more importantly, these three scream marriage material.

Abigail (25, Oregon) is a Client Financial Manager who is hard of hearing. So not only is she gorgeous and kind, but she was born deaf and given the gift of sound through a cochlear implant?! Even I want to marry her.

Anna (24, Chicago) is a copywriter who is an “experience junky” small-town girl living in the big city. She has the girl next door looks with the spunk to keep Matt on his toes. Is this a Hallmark movie?

Saneh (25, Denver) is an IT consultant who completed her first marathon at 16 and was inducted into the University of Florida Hall of Fame for outstanding leadership, service, and academic achievement. Is it too late to switch my vote for President?

That’s all 32 women we will meet on the premiere of Matt James’ season of The Bachelor. Monday, January 4th. I’ll have a recap of every episode published right here every Tuesday morning until I die and Chris Harrison eulogizes me. In the meantime, join our Bachelor Fantasy League for a chance to win prizes and show-off your superior knowledge of the franchise to which I have dedicated my life’s work. Oh, and here’s a trailer for the season to tide us over. It’s going to be a hot mess.

The Cool Table@thecool_table
1.0K Following 1.0K Followers
@jamiesrule @jamadoria @coolstorymere I know you know this, but I"ve had pixie cuts off and on since 1997 and m*n h… https://t.co/VsXyyN7PpC
2 hours ago
4
@LSULeslie @schizoreads I’ve legit never even heard of this
2 hours ago
@chels__ebooks Yes! Josh O’Connor supremacy! I watched this right after I got obsessed with The Durrells ❤️❤️❤️
2 hours ago
@maria_gb75 Keep him
2 hours ago
@baskinsuns AGREED. I love love loved that as a kid (and vowed to be able to do it so someone would love me)
2 hours ago
1
Archives
Entertainment, The Bachelor, TV

2020 Sucks, But the Finale Of The Bachelorette Didn’t