It has been a week since Matt James’s life flashed before his eyes as he met 31 women and one fake queen on The Bachelor.  Since then, he has whittled his bevy of beauties down to two dozen and there was an attempted coup at our nation’s capitol.

In the second episode of the season, Matt partook in the time-honored bachelor nation traditions of mudding, flying in a tiny plane, and posing for wedding photos with 18 brides. As long as no one tries to overthrow Chris Harrison, we’re gold.

Dare I say that this season feels like it has gone back to Bachelor basics? I mean that in the best way possible. 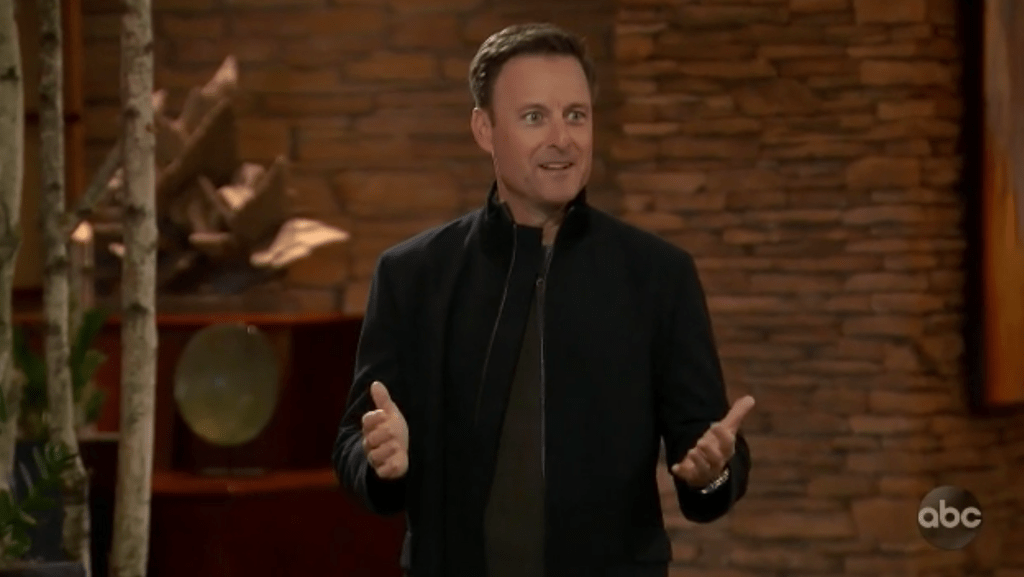 This episode opening had everything. We’re talking long shots of Matt running outdoors, slow pans of Matt on a Peloton, and a close-up of Matt’s abs being scrubbed in the shower with his bare hands. Is it my birthday? Then we got to see the 24 women run into their new suite and pretend to be excited about the floor pillows. I love this journey for them. Finally, Chris Harrison showed up with a date card in the first 5 minutes of the episode.

I swear if we actually get a rose ceremony every week, I’ll cry.

Time To Get Dirty 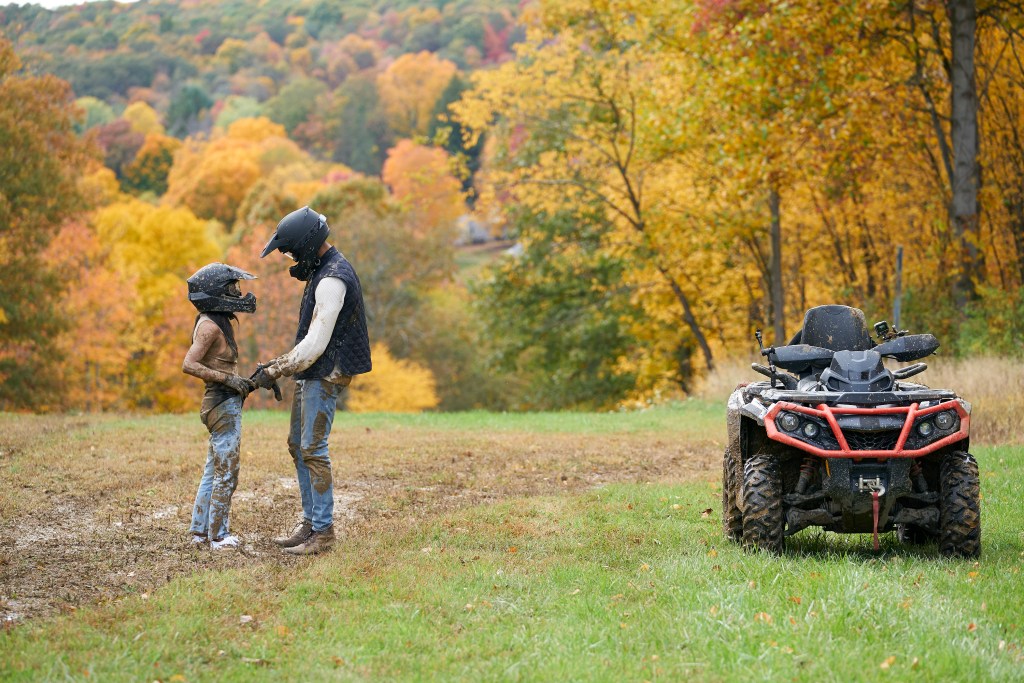 The first one-on-one date of the season went to Bri, the 24-year-old Communications Manager from San Francisco. I immediately liked her because her response to getting the card was, “I wore my worst outfit today!” It’s okay, Bri, this is The Bachelor so you’ll be four-wheeling in the mud until Matt James asks, “Do you trust me?” before spinning donuts and rolling the ATV. Romance!

Whoa, wait, I take that sarcasm back because Matt James is stripping down for an outdoor hot tub soak with Bri and it’s making me feel things. Quick, go to dinner and talk about your sad family backstories, I need a moment.

At dinner, Matt and Bri continued to bond over their shared experience of being raised by single mothers and missing out on having what they define as a “real family.” These two have great chemistry, look gorgeous together, and ended the night making out while fireworks exploded.

Meanwhile, back at the suite, “queen” Victoria (27, Queen, Los Angeles) was making enemies left and right. She’s not here to make friends, but she’s also not here to censor even a single thought before it left her mouth. She wants Matt and she’s “sick of this girl power shit already.” Do you know what that means? She’s going on the group date. 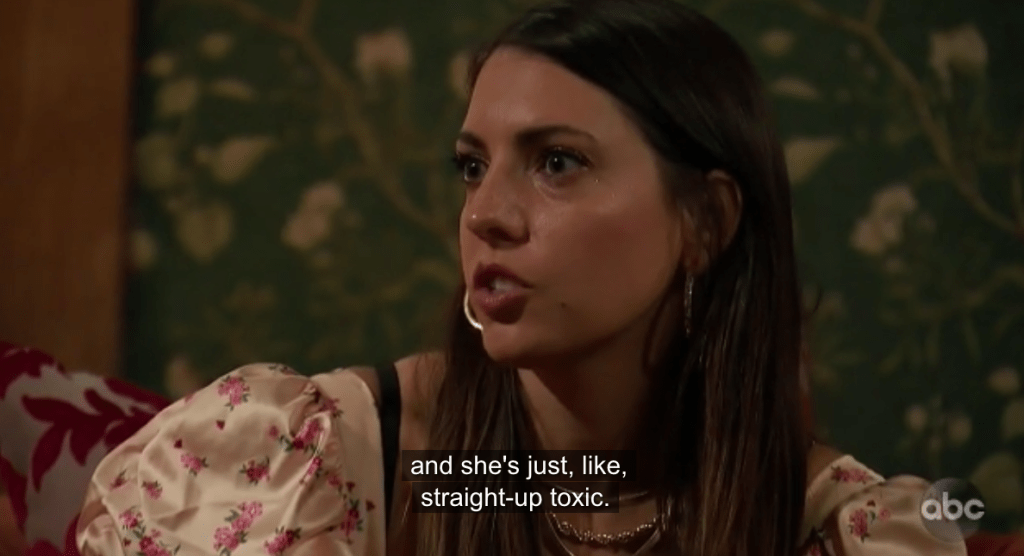 Well, she and 17 of her closest enemies are. That’s right, there were 18 women on the group date and no I will not be naming all of them. (However, one of them is named Pieper spelled with an “ie” which feels important to point out.) The women put on wedding gowns for a photoshoot with the eccentric photographer Franco from Tayshia’s season who was wearing a coat made of what I think were rooster feathers.

But wait, there’s more. Before half of the women had a chance to pose, Chris Harrison showed up and said they’d actually be fighting in a game of “Capture the Heart.” Basically, it was Capture the Flag while wearing wedding gowns and pelting each other with bouquets doused in paint. 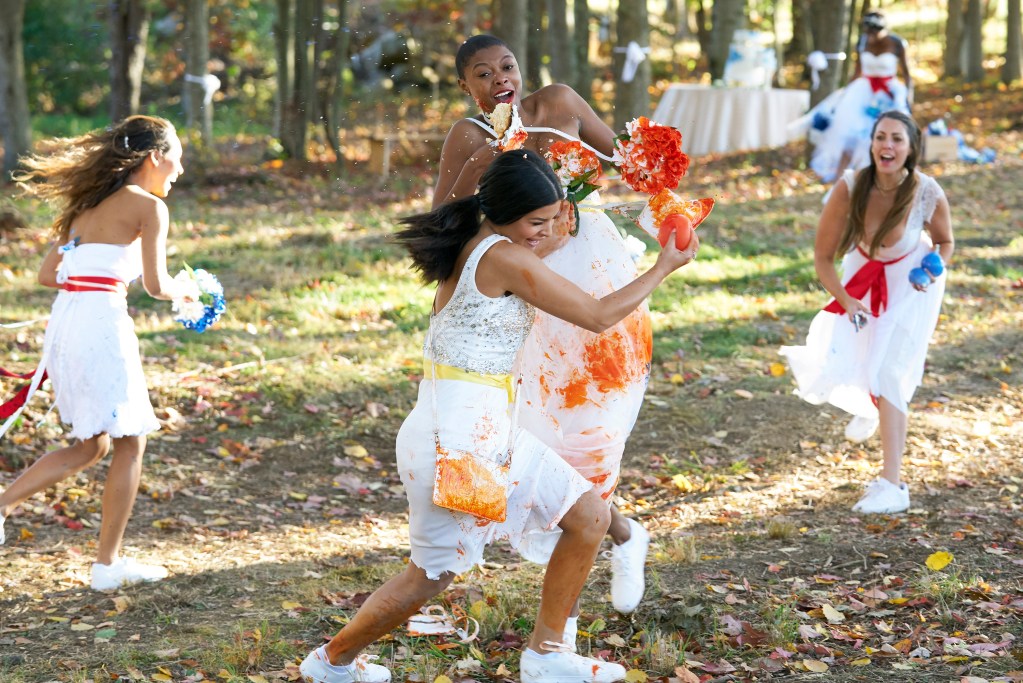 The red team won which meant they got an afterparty while the other team went home and pouted. Lauren (29, Corporate Attorney, Miami) got the group date rose after she shared that she wants a man of faith and Matt was like, “That’s me!” Victoria was pissed. Group date done.

Let’s Take To The Skies

The last date of the week was a one-on-one date in a terrifying bi-plane with Sarah (24, Broadcast Journalist, San Diego). I could tell the pandemic is getting to me, because all I kept thinking about was their air droplets spreading to the pilot behind them. They flew over the resort to rub it in the other women’s faces and then they had an awkward surface-level conversation on a couch the producers had plopped in the woods. What, no hot tub? 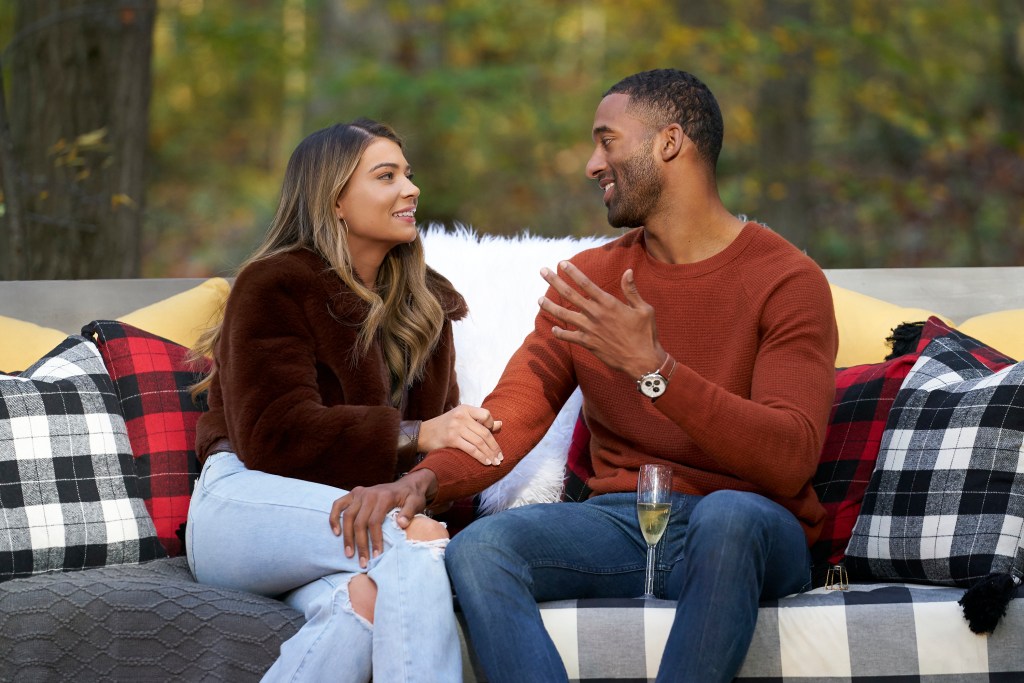 Everything changed at dinner when Sarah finally opened up to Matt about her decision to quit her job in order to become a full-time caretaker for her dad who has ALS. What’s that? She’s not only beautiful, she sacrifices everything for family, the one thing Matt values above all else? Plus she gave him a reason to add her dad to his prayer list? That’s a one-way ticket to the date rose and a lot of kissing in a hot tub. Ohhhh right, there’s the hot tub. Got it.

Truly, does anything good ever come out of these cocktail parties? Whoever decided it was a good idea to lock a bunch of competitive Instagram models in a room with alcohol and one 6’5″ man deserves a raise. 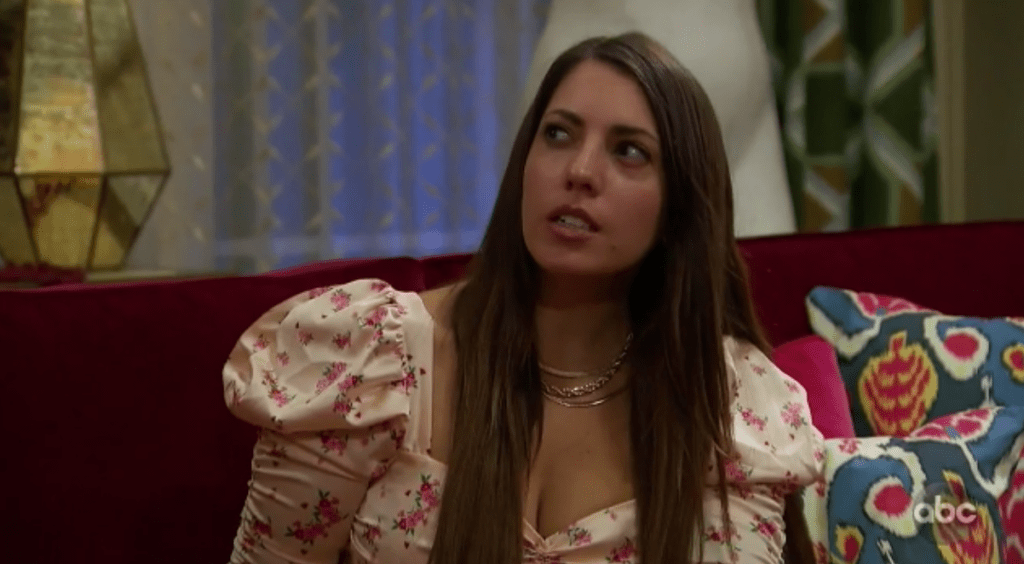 Queen Victoria is still on this show so clearly, the whole party revolved around her toxic energy. This time she set her sights on Marylynn (28, Event Coordinator, CA). She went straight to Matt in her 80’s floral puff-sleeved satin dress with her black bra straps showing to mess some ish up. She told him that Marylynn has been a bully and Matt was like, “I’m not about that, that’s wack!” (That’s a direct quote.)

Marylynn tried to quash the drama with a very mature conversation with the discount-queen; but, Victoria was like, “Don’t sit next to me, I’m a baby.” (Not a direct quote, but the sentiment is right.)

The Rose Ceremony was actually going to happen. The women were on the elementary choir risers, Matt was in a tux, and the platter of roses was overflowing. Finally a whole-ass episode of The Bachelor! It’s happening! JK, Sarah got light-headed and passed out behind a couch. Next time don’t lock your knees, amateur. 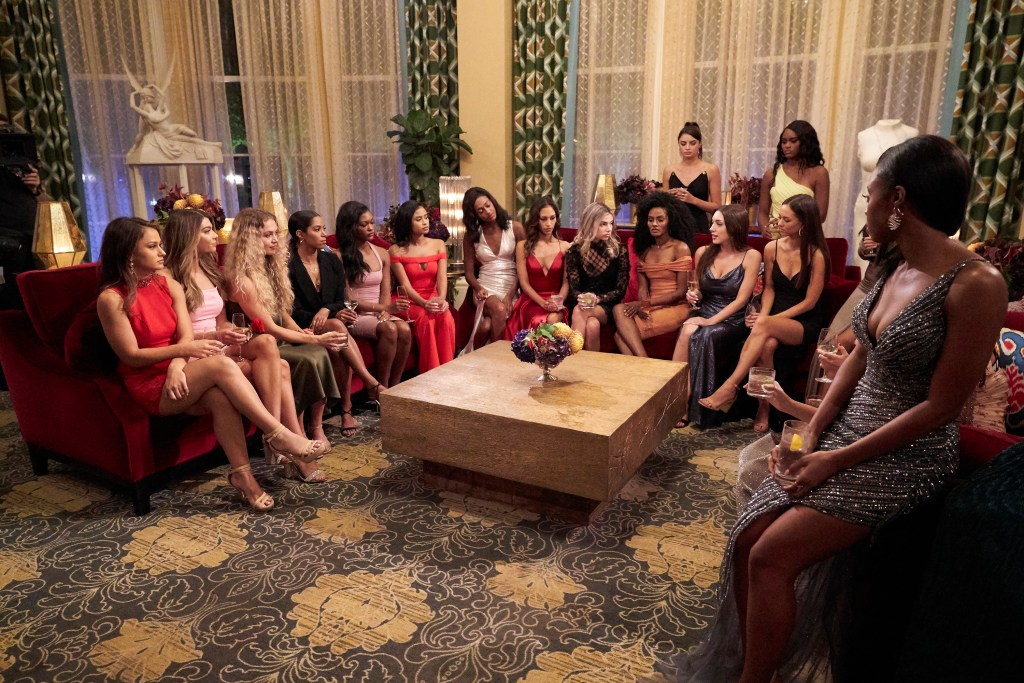 With that, the second episode of Matt James’ season of The Bachelor ended with the hated cliffhanger ending. We all know you’re going to give queen of toxicity, Victoria a rose for the drama, Matt, it’s fine. The producers are persuasive, we get it. Then again, the scenes from next week look like more Victoria with a side of more Victoria. She better get her SAG card for this.

The Bachelor will be back with a new episode on Monday. Let’s hope we’re not in the middle of a civil war before then. I can only handle attacks on Victoria’s character at this time.

The Cool Table@thecool_table
1.0K Following 1.0K Followers
Yesssssss https://t.co/rGaJC4TAJ4
28 mins ago
1
Latto Brought Big (Villain) Energy to #TheBachelor for episode two of Zach's season. https://t.co/qyqmqEZIpH
11 hours ago
1 4
@pagemelt I know nothing about them but it's a good assumption since the album is titled Dear Wormwood. I have so m… https://t.co/rXXSQbWwlG
12 hours ago
2
@pagemelt isnt the whole album based on the screwtape letters? RED FLAGs
13 hours ago
1
@MrsKowski unfortunately yes
13 hours ago
Archives
Entertainment, HBO, Pop Culture, Rants

I Couldn’t Help but Wonder…Do We Need More Sex and the City?