Everything You Need to Know About The Bachelorette Katie Thurston

Book club ladies everywhere will tell you that they venerate the name of Jojo Moyes. We all picked up that engine red cover with its vintage font back in 2013 and sobbed together when Will asked Clark to “tell me something good.” But before Moyes gave us Me Before You, she gave us The Last Letter from Your Lover, my favorite novel of hers.

I’ve made it very clear that I am a sucker for a few things in reading: giant maps in the front, dudes being in love with each other, retold myths and LETTERS. There is a reason why Persuasion is my favorite Jane Austen novel, and it begins and ends with “I am half agony, half hope.”

If the title is any indication, Last Letter is about love letters. The good kind. The ones that make you ache as you read. The ones you wish someone had once written you. True pining. Much hotness. But it’s not rife with them. The story is not told in letters (unfortunately) and they don’t fall in love over letters. The letters, or rather the final one, is the catalyst. 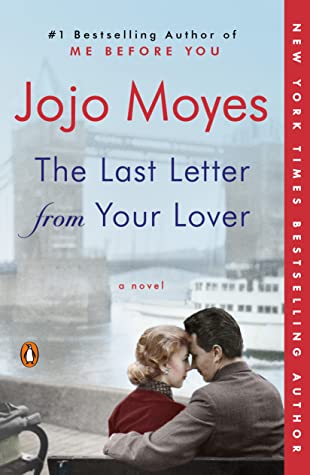 And it’s gorgeous. A journey from 1960 to 2003, when a young journalist chances upon that final letter, the setting and the propulsion is totally engrossing. It’s a story about missed chances and enduring love and LETTERS. It’s a wonderful look at the culture of marriage and fidelity in 1960s London. Despite heartbreak and a huge amount of frustration, it’s a totally entrancing read.

And now it’s going to be an even more entrancing film.

I love this book so much that I’m willing to overlook the fact that, on first glance at this trailer, it seems like Shailene Woodley and Felicity Jones are miscast into one another’s roles. Shailene seems to have appeared out of the hippie ether around 2009, a singular entity that couldn’t have possibly existed before bib necklaces and haberdashery attachments on tank tops. Felicity, conversely, feels like she lives inside a period piece. She was made for them.

And I’ve just realized that this book is set in 2003, and that’s practically a period piece all on its own. I wonder if Jones’ Ellie will have a Motorola Razr.

It doesn’t matter. I will be brewing some tea, wrapping up in an afghan and hugging an embroidered throw pillow when Last Letter From Your Lover drops on Netflix on July 23rd.

The Cool Table Has a Podcast Now!@thecool_table
988 Following 939 Followers
Shrimp-gate, Baywatch, Singing in underwear, oh and, Kaitlyn Bristowe made everyone cry. Must be #TheBachelor https://t.co/fD7xk1maFJ
3 days ago
1 3
We are going to do a Where's Waldo but with Amy, as in Where's Amy in #GildedAge Newport. Since she lives there. https://t.co/RKLfEbA4P5
3 days ago
4
RT @RebeccaCokley: "You’re still making that f---ing backwards story about seven dwarfs living in a cave together," says Peter Dinklage. "W…
3 days ago
1.5K
Figuring out why I’m loving @Station11onmax by figuring out why I hated @TheLastDuelFilm https://t.co/NIHG4duULO
3 days ago
RT @BlessAmysHeart: When @bethorne writes the smartest shit.
4 days ago
1
Archives
Entertainment, Movies

Marvel Studios Phase 4 Trailer is Everything

Everything You Need to Know About The Bachelorette Katie Thurston

Getting to Know Freddy Carter, Our Kaz Brekker from Shadow and Bone