The only thing that could make me forgive The Bachelor for abandoning us two weeks ago after that cliffhanger ending is if they did something ridiculous. Like, I don’t know, maybe if they make Clayton’s harem of potential spouses discuss their worst insecurities on a group date led by Kaitlyn Bristowe and then instigate a fight over a plate of shrimp.

Oh, those are actual things that happen in this episode?

The only rule is there are no rules

As we all remember, things were finally getting interesting on The Bachelor last episode when Clayton Echard asked a perennially confused Jesse Palmer if he could gank his rose back from Cassidy because she  has a friend with benefits waiting at home.

This week, after a quick google search to confirm, Jesse Palmer told Clayton that this is The Bachelor and he can whatever the hell he wants.

So Clayton took back Cassidy’s rose and sent her home crying.

Okay fine, first he asked if she had anyone waiting for her back home and she came up blank until he reminded her of the facetime she told the other women about. Cassidy was like, “Oooooh that guy. He’s a friend who I sleep with sometimes but who doesn’t actually want to date me so I settled for you instead.”

THEN he took back Cassidy’s rose and sent her home crying. 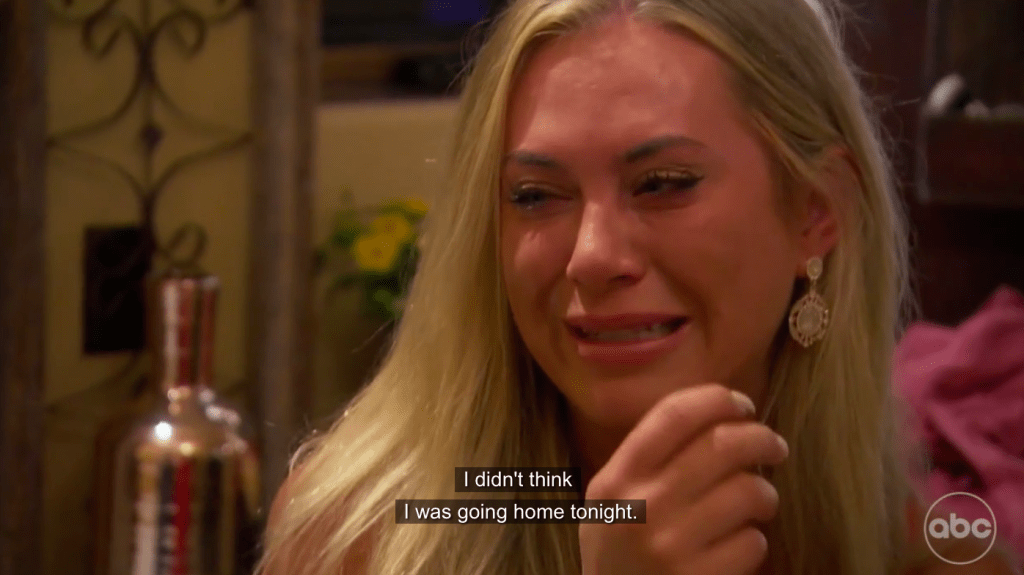 You really couldn’t have wrapped that up last episode for us?

Anyway, all of the women were thrilled she was out of there because “the poison was gone” from the house, but the crazy look in Shanae’s eye was like, “bet?”

There’s that Rose Ceremony we were missing

In all honesty, I can barely distinguish any of these women from one another at this point in the season. All I know is that Sarah and Susie have roses going into the rose ceremony and everyone hates Shanae. 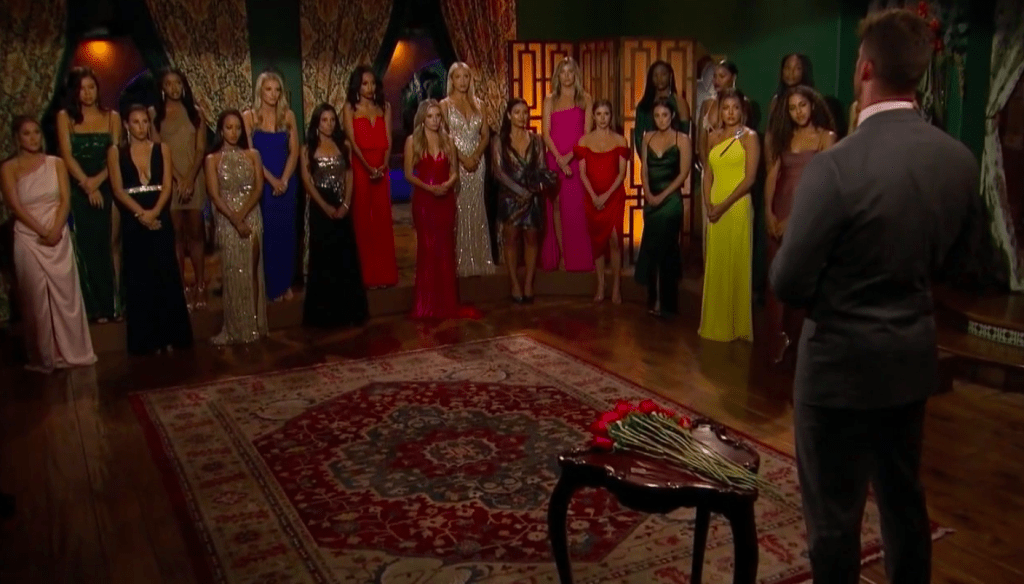 Clayton opened the ceremony with an apology for wasting so much time breaking up with Cassidy and then he handed out the roses to Eliza, Rachel, Serene, Sierra, Teddi, Lyndsey, Jill, Gabby, Kira, Mara, Marlena, Genevieve, Hunter, Melina, Elizabeth, and…wait for it…Shanae.

The drama lives to see another day.

That means, Ency, Selling Sunset Kate, and Tessa were sent home. The other 17 women (minus Shanae) sobbed saying goodbye to them so I’m sure they’ll be on a Mexican beach near you soon.

Time for a trauma dump with Kaitlyn Bristowe 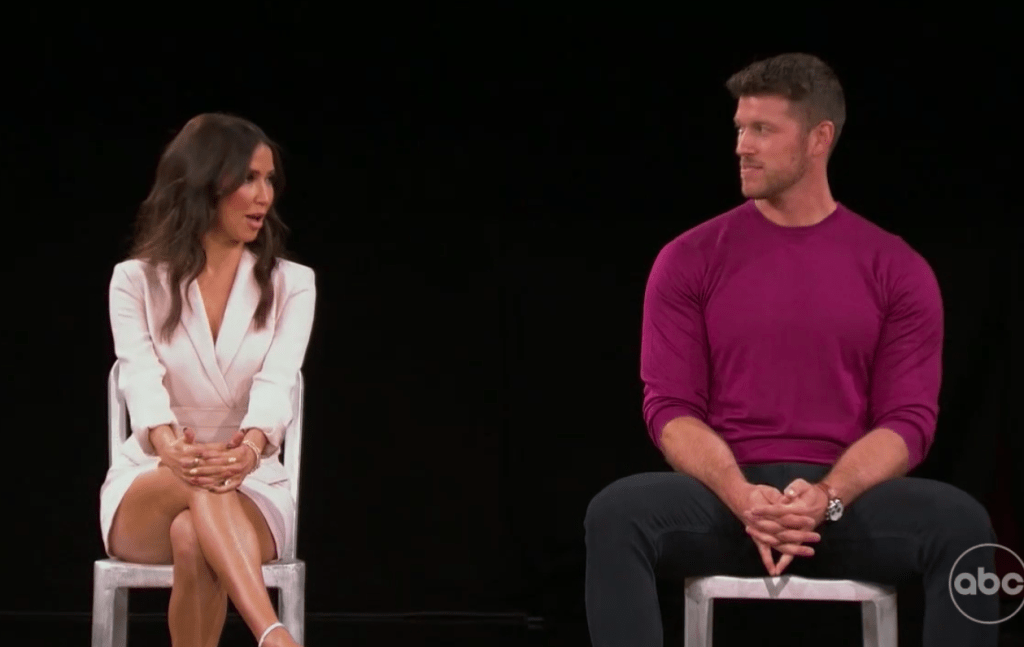 Nothing bonds eight women trying to date one mediocre, but tall, man like shared trauma. It’s finally time for Kaitlyn Bristowe to make everyone cry in a group therapy session that she’s wholly unqualified to mediate.

Serene, Susie, Eliza, Mara, Marlena, Hunter, Genevieve, and Jill sat in a circle on a darkened stage while Kaitlyn gave probing prompts like, “stand up if there are parts of yourself that you aren’t proud of.” It was like theater camp with hot people. 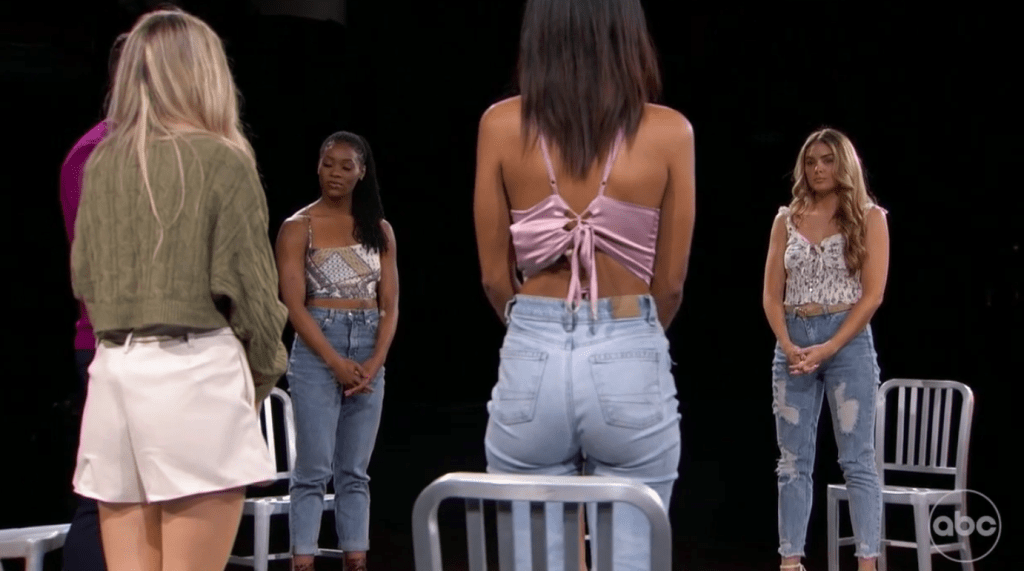 They then went around the circle and shared what, specifically, they aren’t proud of themselves for. There aren’t enough Instagram followers in the world to make me do this.

It was so bad that this portion of the date had a trigger warning posted before it aired.

They disclosed everything from eating disorders and emotional abuse to veiled hints about cheating on past partners. By the end of it, they were all sobbing and half in love with each other while Kaitlyn Bristowe sat looking proud of herself. 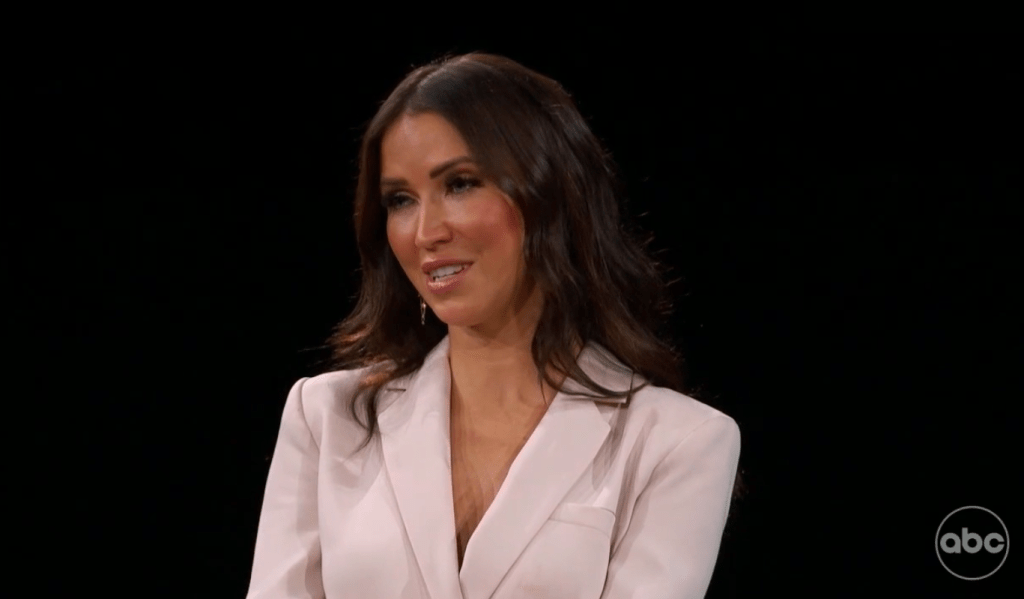 Clayton kept repeating that it was the best date he’s had yet, but he must have forgotten the hot tub on the yacht last week. But hey, if reading copious amounts of romance has taught me anything it’s that there’s no bond stronger than a trauma bond.

That night the after-party took place in what appeared to be a bank vault. It’s safe to assume that was a nod to the way they “opened the vault” on their emotions. Clayton had a super hot make-out session with Susie on the roof, but ultimately gave the date rose to Eliza who he said is the most beautiful woman he’s ever seen.

Sarah and Clayton get naked 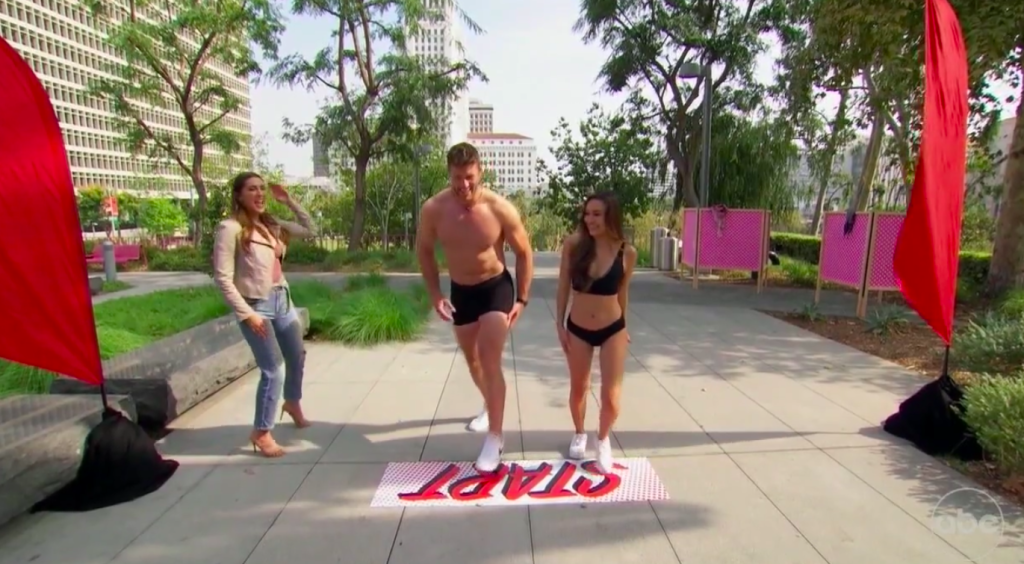 Speaking of trauma bonding, Sarah got this week’s one-on-one date with Clayton which featured a scavenger hunt set up by Becca Kufrin that they had to complete in matching black underwear.

They made these poor, gorgeous, basically kidnapped people run around downtown Los Angeles in their unmentionables. And then they made them sing into microphones about their feelings for one another while local security guards watched in dismay. 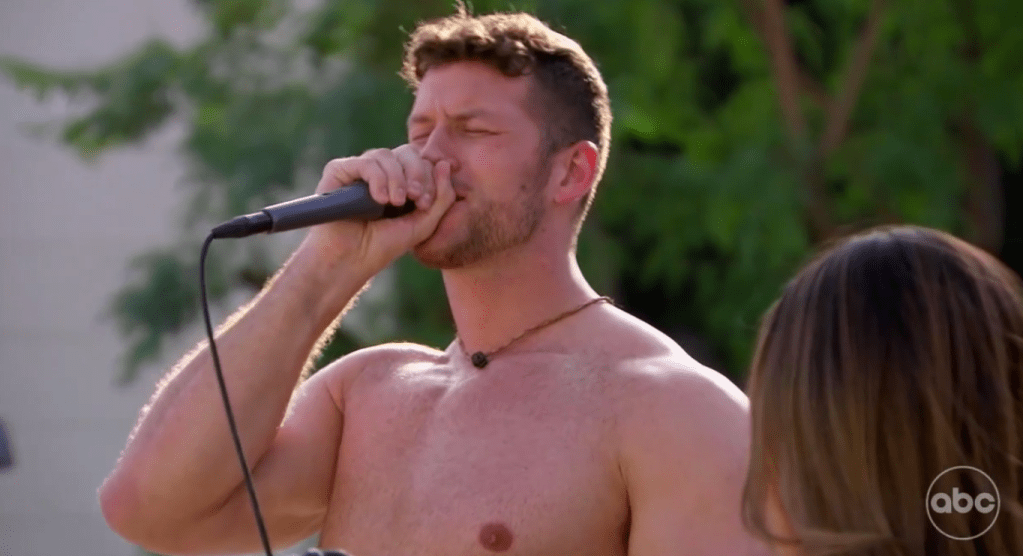 If someone asked me to run on camera in my underwear I’d quit on the spot, but that’s just me.

Anyway, the whole thing kinda made me want to die, but their dinner that night at the Van Gogh experience almost made up for it. Sarah opened up with Clayton and told him about her difficult childhood being adopted into a white family (she’s biracial with biological parents who are white and Vietnamese). There’s nothing Clayton likes more than “getting vulnerable” so he loved every second of it. 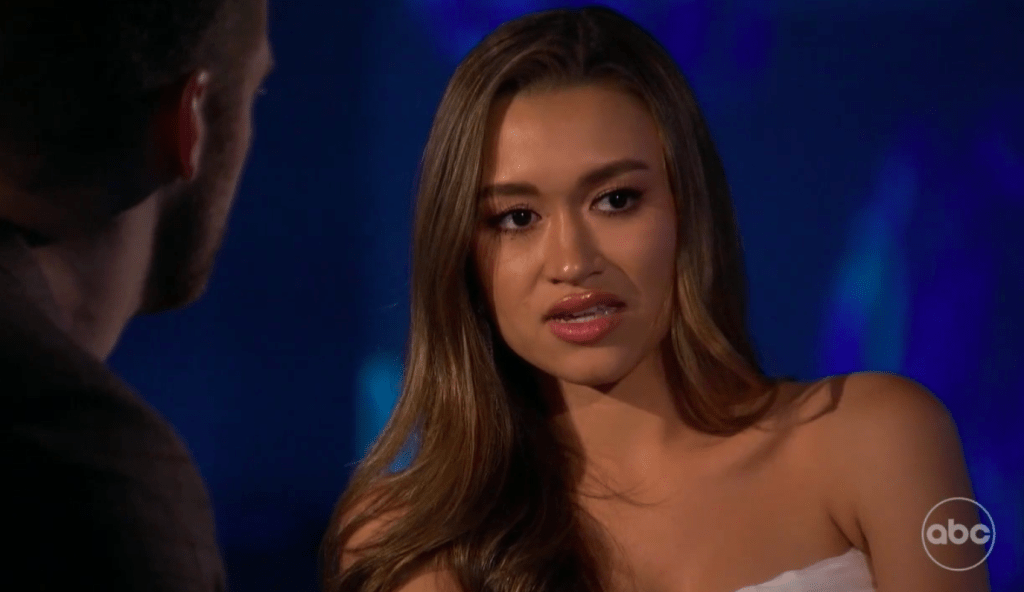 The music swelled. The rose was given. And I think we have a real contender here. 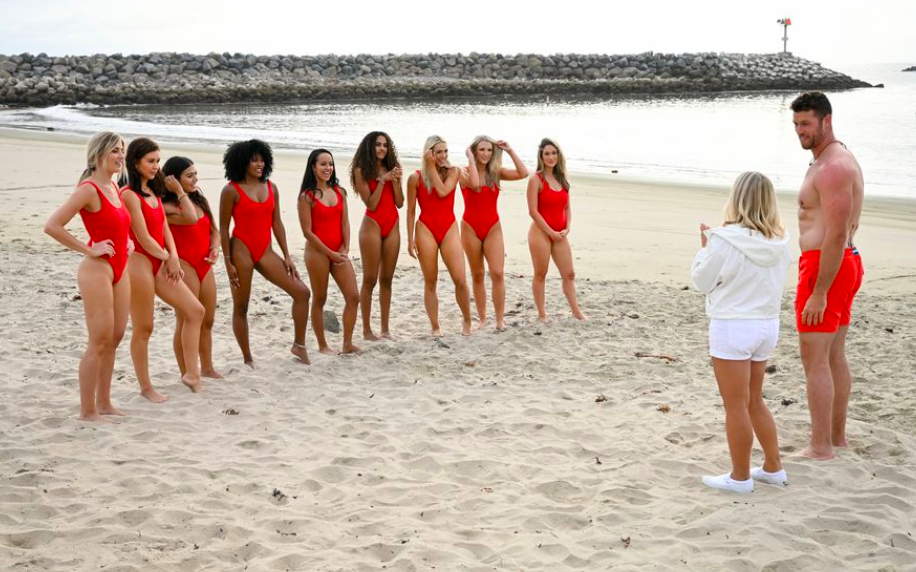 Obviously, this involved making the girls wear matching red lifeguard bathings suits while they rubbed sunscreen on each other. That’s something, it turns out, that they’re truly terrible at because by the end of the date Clayton looked like me after getting out of the tanning bed before prom junior year – fried within an inch of his life.

Okay, so, yes, making these women run in slow-motion down the beach or perform sexy CPR on a dummy makes my inner feminist howl in disgust but these dates are funny every single time. I don’t make the rules.

Or at least they’re funny when they aren’t taking themselves seriously which Shanae is clearly incapable of doing.

More on Shanae being an absolute menace later, but on this date, it was Gabby who came out on top by being silly and fun.

(Also, she used to date Dean Unglert and I like messy drama so, more Gabby please, thanks.)

This is Shanae’s show now 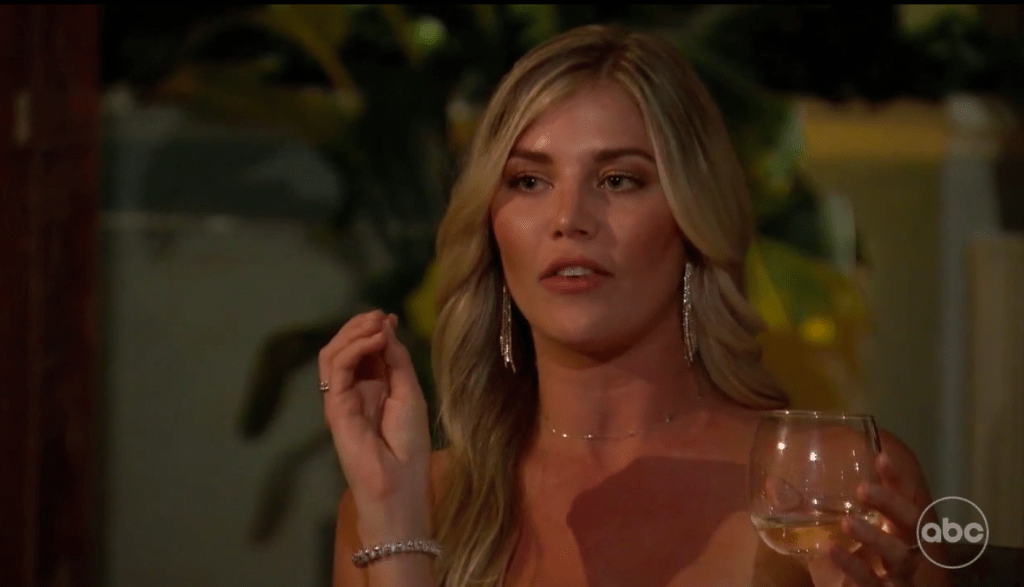 Before we can get to the after-party you need to know about shrimp-gate.

Earlier in the episode, Shanae’s nemesis Elizabeth (the one she mocks for having ADHD) made a pan full of shrimp for the girls in the house. Everyone was excited for the shrimp because there’s quite literally nothing else to do on this show when you’re not filming. But instead of letting everyone try a bit of the shrimp, Shanae selfishly devoured more than half of the plate while a digital shrimp graphic kept count in the corner of the screen. 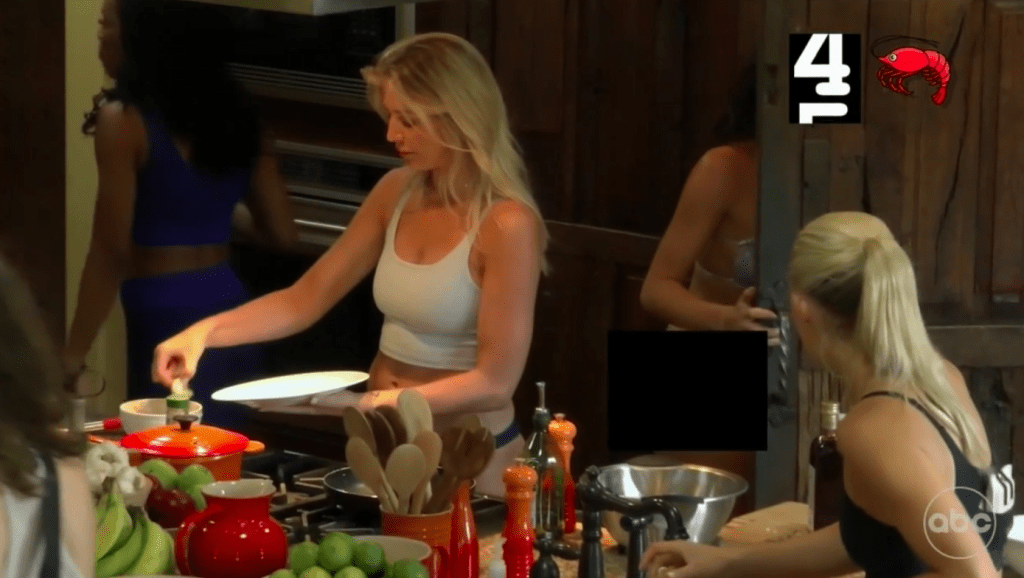 When everyone inevitably got upset with her, Shanae was like, “What, I was hungry?” and made more shrimp. She then proceeded to pass out the new shrimp with so much pomp and circumstance it was as if she had personally coaxed them from the ocean with her bare hands.

When the other women didn’t acknowledge her gift of shrimp with the gratitude of villagers welcoming heroes home from the war, she decided that they are all bullying her and it was all Elizabeth’s fault.

Back to the group date

At the after-party that night, Clayton eschewed his usual outfit choice of a hoodie and blazer for a very large leather jacket. Everyone reacted like they liked the leather jacket, but clearly, he was only wearing it because it felt cool against his third-degree sunburn.

Gabby used her time with him to rub aloe on him. Rachel confirmed that she has a strong connection with him with some white-hot physical chemistry. And then shrimp-loving Shanae ruined everything…again.

Clayton had barely sat down to have his one-on-one time with Shanae when she opened the floodgates of her discontent. She told him that she feels bullied by Elizabeth and that she had created such a toxic environment that Shanae feels scared to be around her. 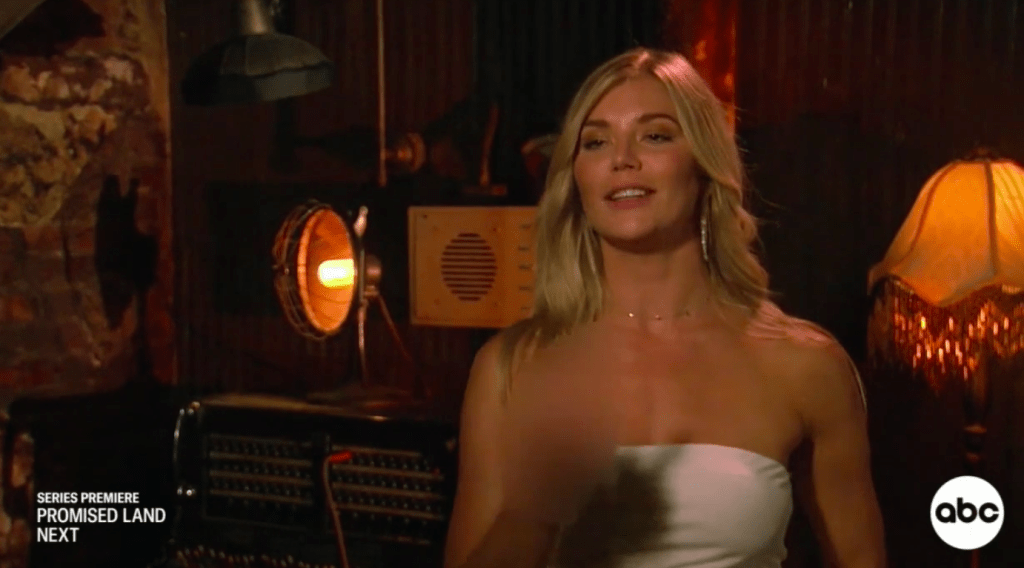 Clayton was horrified by what he was being told and immediately went to get Elizabeth’s side of the story.

Meanwhile, Shanae was in an interview laughing and saying, “OMG he believed me. I’ve got him. I was good! He believes me!”

Clayton confronted Elizabeth about her alleged behavior and once again Elizabeth denied all of it because none of it is true. Then Lyndsey W. had her time with Clayton and apparently Shanae had called her a bully too. The entire group turned on Shanae and demanded she explain herself but he had nothing to say.

Sierra spoke for us all when she said, “No one is bullying you, Shanae. We just don’t like you.”

As far as Clayton is concerned it’s a classic case of she said-she said and he doesn’t have the information or interpersonal skills to navigate it.

AKA he’s a dummy dum dum who doesn’t know who to believe when hot girls are fighting.

Thus, once again, this episode ended in a cliffhanger.

Next week The Bachelor will be back with more Shanae, more shrimp-gate, more allegations of bullying, and, somehow, even more drama.

The Cool Table@thecool_table
1.0K Following 1.0K Followers
@jamiesrule @jamadoria @coolstorymere I know you know this, but I"ve had pixie cuts off and on since 1997 and m*n h… https://t.co/VsXyyN7PpC
1 hour ago
4
@LSULeslie @schizoreads I’ve legit never even heard of this
47 mins ago
@chels__ebooks Yes! Josh O’Connor supremacy! I watched this right after I got obsessed with The Durrells ❤️❤️❤️
47 mins ago
@maria_gb75 Keep him
46 mins ago
@baskinsuns AGREED. I love love loved that as a kid (and vowed to be able to do it so someone would love me)
45 mins ago
1
Archives
Entertainment, HBO, Movies, TV