The author in front of Mamie Fish's Crossways

Too many of you people are enjoying The Gilded Age on HBO. This isn’t my yucking on your yum, like the lady who had that bad Ted-Lasso-fans-are-all-weird-childless-Disney-adults take. I’m only worried that The Gilded Age fans will try for a more immersive experience and visit my home of Newport, Rhode Island.

Newport is wonderful. Don’t come. We are filled up.

But let’s pretend we have the space for you and you are on your way.

Some things to know about Newport

The Gilded Age hasn’t actually shown much of Newport. Yes, we have gotten Mrs. Fish’s Ocean State vacation home (that’s it in the cover photo). But mostly, we have Newport standing in for other places, like Manhattan interiors or for the town of Dansville. In show creator Julian Fellowes’ timeline, Mrs. Astor’s Beechwood has been around for a few decades, but Mrs. Russell hasn’t even begun to build her Newport “cottage.” I hope they start building soon, because paint drying on the walls of The Breakers > Louisa Jacobson acting

Please note that 21st century Newport is weird. Our famed Bellevue Avenue is home to the lion’s share of Gilded Age mansions, and it is home to the Stop n’ Shop where I recently overheard this rant from a customer: “Fuck all you fucking cunts. Call the Newport cops, they love me. I hate this place, I should go back to South Boston where they respect people. And Whitey Bulger was a good man who was framed by fuckers like you!” The Aristocrats!

I don’t usually go to that Stop n’ Shop, but they have the best smoked salmon selection on the island. 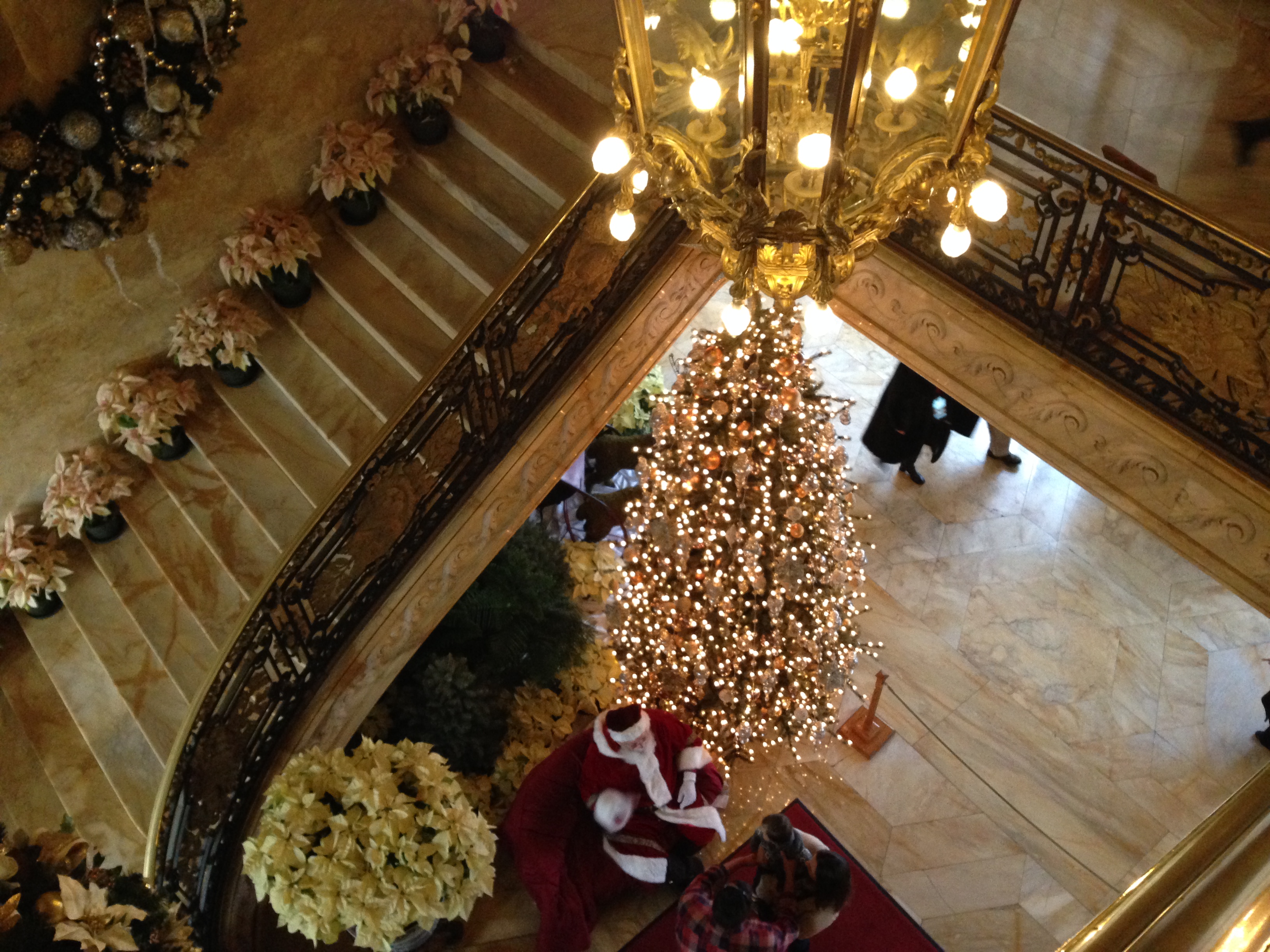 Santa at his Marble House residence, located on Bellevue Avenue

Newport has summer people, and then we have the locals. I have lived here for 15 years, and my daughter was born in Newport Hospital, which makes me “local adjacent.” Newport is a town of contradictions. We have insane wealth, but over 70% of our public school kids qualify for free or reduced lunch. We are fighting to get a new public high school built on a very tight budget, while a group of well-heeled gentleman just raised $4 million dollars to move and restore a horse trough, built as a tribute Alfred Gwynne Vanderbilt Sr who drowned in the sinking of the Lusitania. Please note, we no longer have horses in need of a trough in Newport. But we sure as shit need a new high school.

So if you come — especially in July or August — be ready to mingle with the descendants of “Dodo” and “Oatsie,” while elbowing your way past bachelorette parties who drove in on the Buzz Bus and barfed on their Aldo heels. Are you sure you don’t just want to go to the Hamptons instead?

How the hell would I know? I live here. I have a great guest room. The only place I can recommend is the Brenton Hotel because it has the best hotel bar, The Living Room, and the best bartender in town, Maurice.

The Clarke Cooke House. You don’t go to the Cooke House to eat. You go to sip a Kir Royale and rub elbows with dudes who work at McKinsey while they wait for their trust funds to become available.

Located on Bannister’s Wharf, the Cooke House is packed in the summer. If you find some knock-off Lily Pulitzer, you’ll fit right in. Your guy can wear Nantucket reds and Sperry’s stained with teak oil. I’ve seen noted-fascist and bow-tie wearing Tucker Carlson dining here, if that helps to set the scene.

Best courtroom to find yourself in

If you get arrested and have to appear in court, think of it as another Newport destination. The Municipal Court sits in historic Washington Square, and the second floor courtroom is where Claus von Bülow was found GUILTY of attempted murder of his wife, Sunny, at their Newport mansion, Clarendon Court. The courtroom is also where I got divorced. 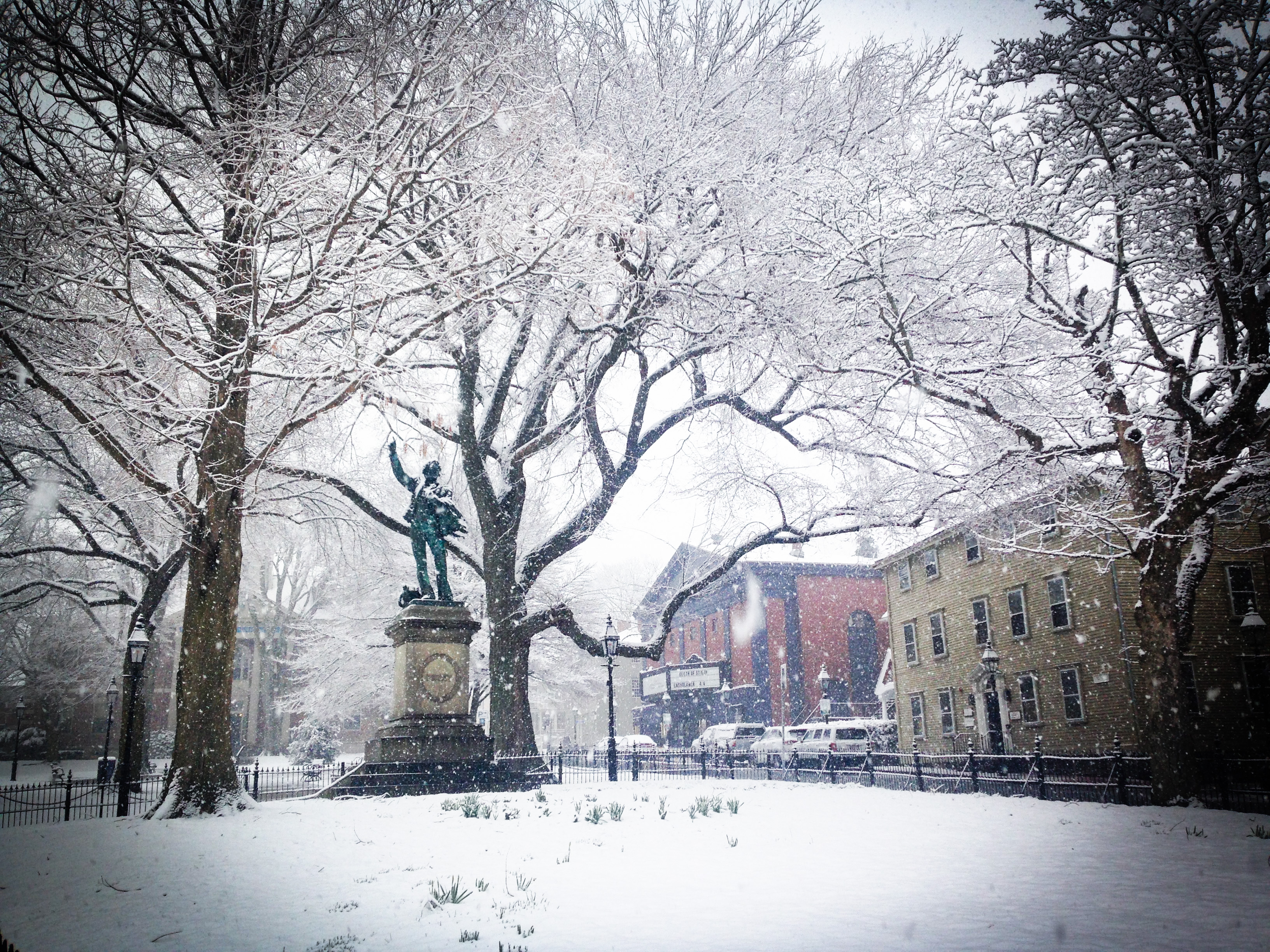 Lol. I’m 48. I don’t go out “at night.” But I do wear really cute short skirts at the International Tennis Hall of Fame. My bestie and I have a standing lesson with Noah Alexander every Saturday, even though I’m currently mad at him because he won’t teach me how to do a tweener. Something about “liability.”

The Tennis Hall of Fame doesn’t have a single pickleball court or pickleball line on the premises. Stay strong! 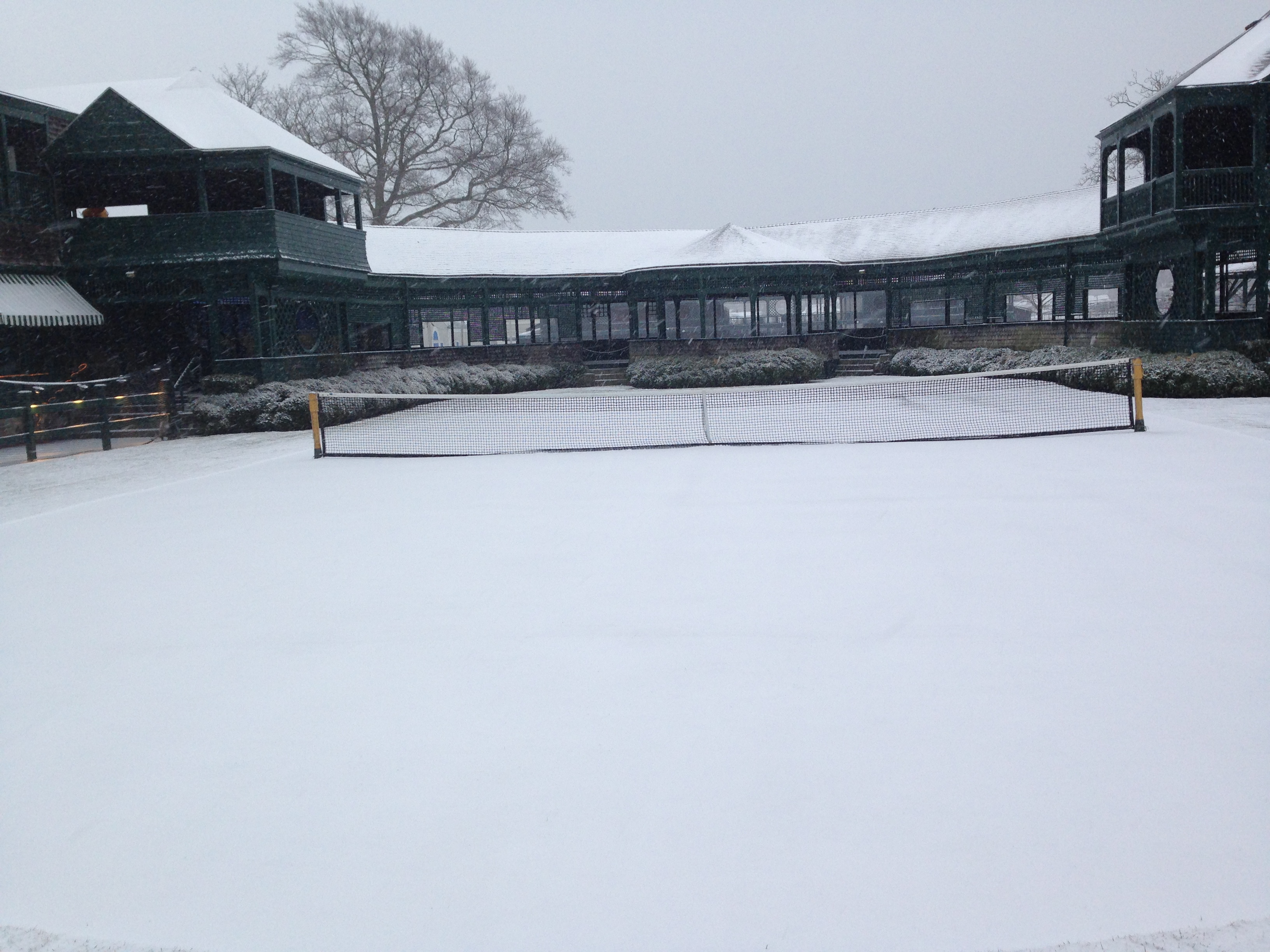 Ledge Road is the best spot to park for the “rocky part” of the Cliff Walk. I love the Cliff Walk and enjoy it all the time, especially when my partner wants to “go do something that moves our bodies.” Ugh. Why can’t we just sit here and watch Yellowjackets!

But watch out, because the rich people who live on Ledge Road will try and put up a fake sign to keep you off their very public street! In fact, Ledge Road is the locale of Land’s End, Edith Wharton’s former home. I feel like Wharton would look askance at such exclusionary actions. Newland Archer would never! May Welland 100% would. Stuck-up, bitch. 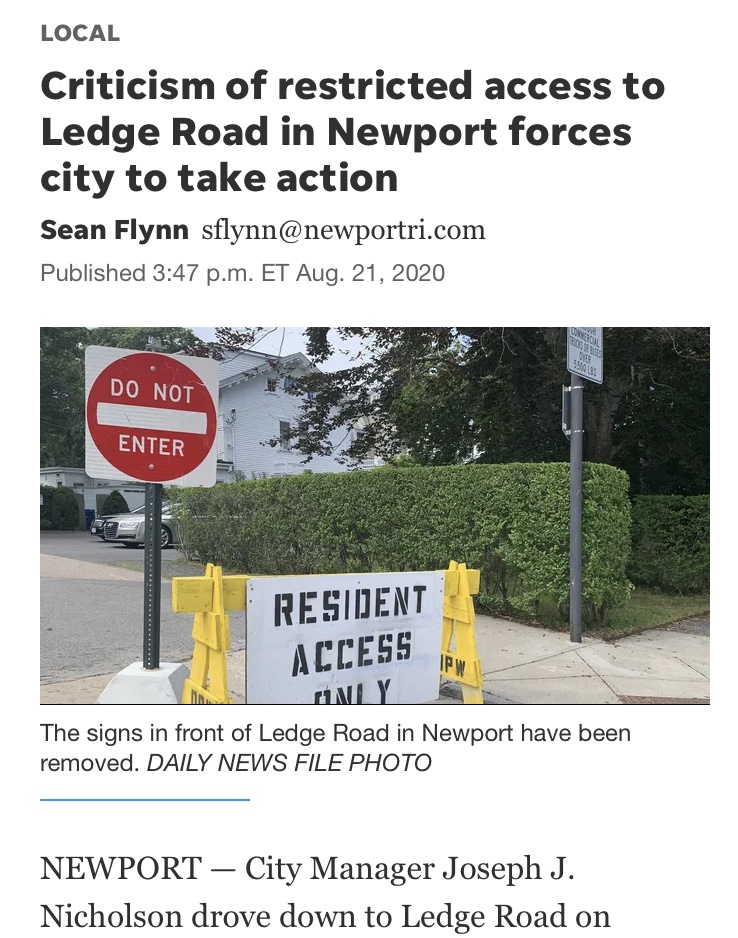 I love X&O Boutique on Bellevue, and I can sum up why in one word: CAFTANS

I also love Bellevue Kids, just a few doors down, because the owner is a Rogers High School graduate (Newport Public Schools FTW!) with amazing taste. Oh, and she plays tennis with me. Give her all your money.

The Breakers is the most popular, but The Elms is my favorite. The Elms was the summer residence for coal robber baron Edward Julius Berwind. The house has a conservatory with citrus trees (!), and the weeping European Beech tree in the back is the stuff of dreams. The Elms’ majestic kitchen stands in for the Russell’s, French chef not included. Very cool that Berwind’s impact can still be felt today in this thing we call “climate change.” 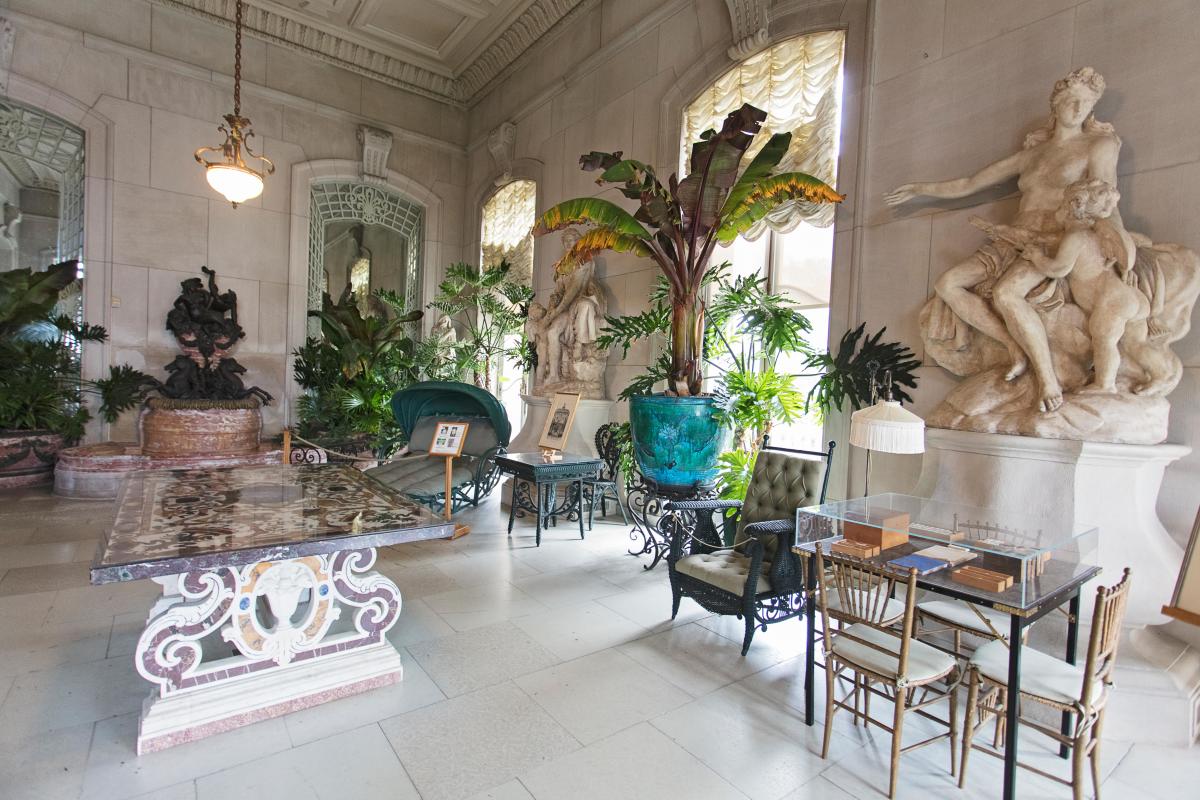 Pick my favorite bar? That’s like asking me to pick my favorite scar (It’s the hole left from my belly button ring). Pour Judgment isn’t just the best bar. PJs — as us locals call it —  is the Best Dive Bar. It’s also the Best Romantic Spot because it’s dark, always crowded, and you have to smoosh against you lover. It’s where Frenchie and I had our first bisou. Awwwwww.

One thing to beware of: my neighbor, Todd, basically lives at PJs and he’s a Trumper who always wants “to simply engage in conversation.” Not today, Todd. Not today. Not enough ABV in this really heavy IPA.

Have you met me? Of course nachos are on this list. Diego’s on Bowen’s Wharf has the best nachos, and instead of chicken or pork, ask for seared tuna. It’s off-menu but trust me on this one. And they make a Spicy Paloma that will make you pucker and smile.

The city of Newport is open from 3-5 pm daily. The law says you must yield to pedestrians in the crosswalk. Loud pipes save lives, but ruin quality of life. And remember, you don’t have to go big; you can just go home.

The Cool Table@thecool_table
1.0K Following 1.0K Followers
Yesssssss https://t.co/rGaJC4TAJ4
17 mins ago
1
Latto Brought Big (Villain) Energy to #TheBachelor for episode two of Zach's season. https://t.co/qyqmqEZIpH
10 hours ago
1 4
@pagemelt I know nothing about them but it's a good assumption since the album is titled Dear Wormwood. I have so m… https://t.co/rXXSQbWwlG
11 hours ago
2
@pagemelt isnt the whole album based on the screwtape letters? RED FLAGs
12 hours ago
1
@MrsKowski unfortunately yes
12 hours ago
Archives
book review, Books, Fantasy