Behind the Scenes of The Hating Game

This week on The Bachelorette, Tayshia Adams wore a wedding dress, judged phallic art, hunted for ghosts, and navigated a two-on-one.

Sounds like an average night on Tinder. Let’s do this. 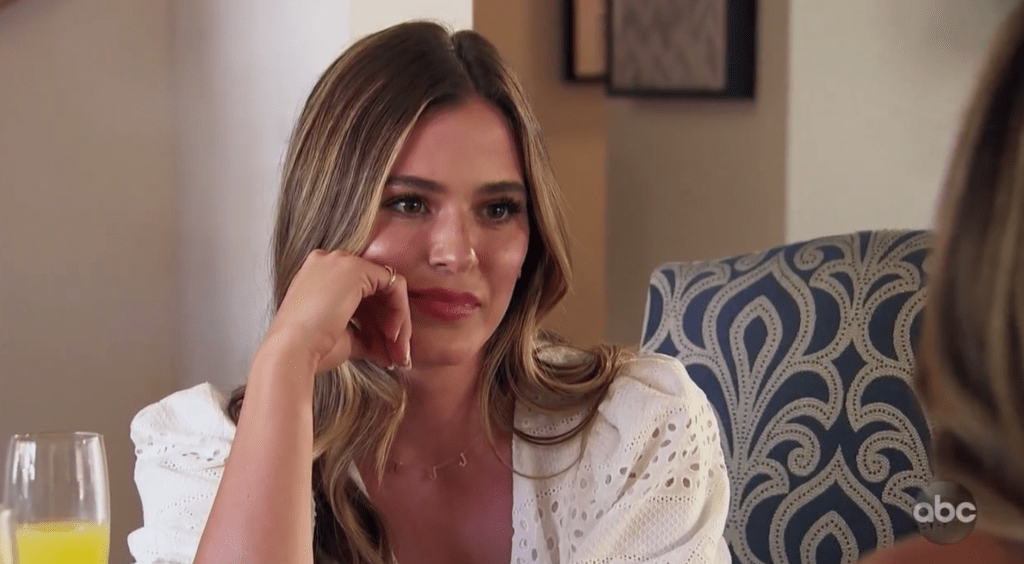 Chris Harrison can only handle so many days in the desert with a revolving door of bachelorettes, so this episode opened with him leaving JoJo Fletcher in charge.

Turns out that he was taking the week off to take his son to college – which broke their quarantine bubble – so he needed a sub. Who is better for that job than a previous Bachelorette/current reality tv host? For her part, Jojo is still engaged to Aaron Rodgers’ little brother Jordan and she doesn’t look like she has aged a single second since season 12.

I cannot say the same.

The first one-on-one date went to Zac C. a 36-year-old addiction specialist who looks like the lovechild of JP Rosenbaum and Matthew McConaughey.

Zac and Tayshia spent the day on a wedding photoshoot complete with gowns, tuxedos, a cake, and a creative director/photographer named Franco Locasta who looked like a skinny version of Arnold Schwarzenegger in booty shorts who was playing the part of Franc in a remake of Father of the Bride.

Tayshia was super nervous about the photoshoot because she has been there/done that with the whole wedding thing. Luckily Zac is the smoothest man on the season. This guy stood there in a full tuxedo, outdoors in the middle of the desert in July, with sweat making his hair literally drip, and still managed to look cool. Meanwhile, I can’t even remember to wear a bra in the background of my kids’ zoom school meetings.

That night Zac opened up to Tayshia about his dark past. In his early 20’s, Zac had a brain tumor removed which led to an addiction to pain meds, alcoholism, a DUI, and divorce. Ultimately he got clean after hitting rock bottom and now is on the board of directors of the rehab facility where he was once a patient. 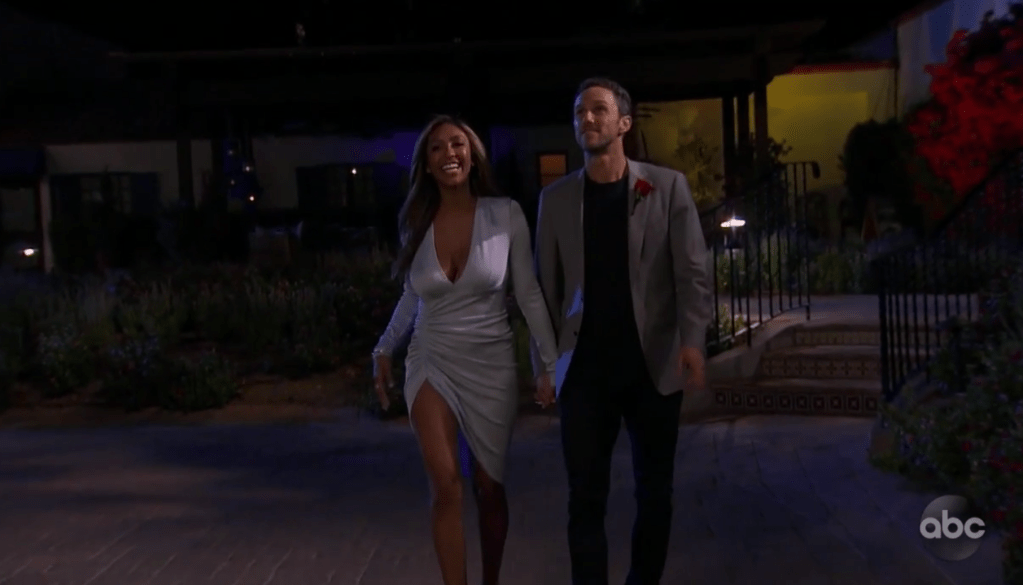 He told his story with clarity, honesty, and the full confidence of a man who knows where he’s been and where he wants to go next. In his own words, he’s a miracle, so no one will be able to convince him that he couldn’t go on a show in the middle of a pandemic and find love.

See what can happen when this show casts someone over the age of 35?

Tayshia does because he got the date rose and a makeout sesh on a ferris wheel.

Things are getting downright respectable around here, so Tayshia only took 10 men on her next date. What is this, monogamy?

Don’t worry things got weird again when Spencer, Ivan, Ed, Brendan, Riley, Demar, Bennett, Ben, Noah, and Blake walked into a dark room with a spotlight on a naked couple embracing. I know you just skipped over that list of names, so all you need to know is that bougie Bennett and “little” Noah hate each other. 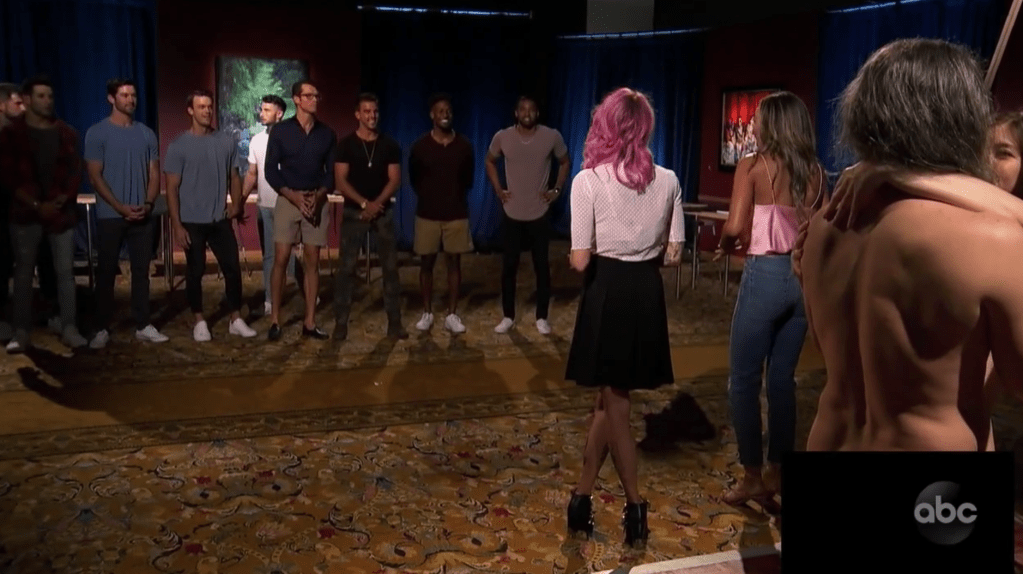 It turns out that they would be completing art projects like sketching naked models, sculpting with clay, and creating self-portraits to show their vulnerability. That resulted in some real, moving vulnerability being displayed, but also one sculpture of a penis. It’s all about balance.

For a date that started with two spotlighted naked people, this date got real, fast. Tayshia was crying, the men were sharing their formative tragic backstories about past relationships and abandonment issues, Bennett and Noah were glaring at each other; it was a lot. In the end, the date rose went to veteran Ben who told Tayshia about his recovery from an eating disorder. See? Really serious!

If you’re into watching giant ex-NFL players scream like a small child at the top of their lungs, then Tayshia and Eazy’s date exploring the haunted part of their resort is for you. I’m super into that, so I thought watching them jump and scream in fuzzy black and white night vision was fun. 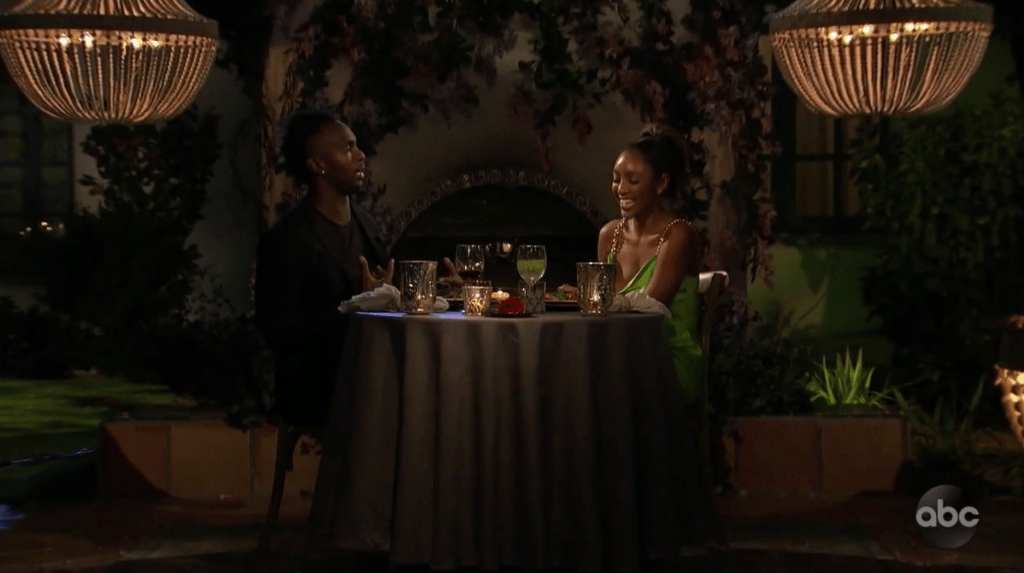 There were some very serious allegations making the news about Eazy earlier in the season. Due to that, it’s difficult to know if Eazy has been edited out of the show in post-production or if we are actually seeing the full story of his relationship with Tayshia. Other than some funny one-liners, we’ve barely seen the guy on our screens at all. So, despite the swelling music playing over the dinner portion of their date, I did not see it coming when Eazy told Tayshia that he was falling in love with her.

Maybe Tayshia saw the signs, but take away all of the accusations and one thing remains true: you don’t take the guy you’re falling for on the scary ghost tour. You take him on the wedding photoshoot date.

In the end, Tayshia did not give Eazy a rose and he left the quarantine bubble seriously bummed out and in need of a publicist.

Two For the Price of One

With Eazy’s exit, Tayshia now has 11 boyfriends and time to spare, so she decided to pit bougie Bennett and little Noah against each other.

Bring on the two-on-one! 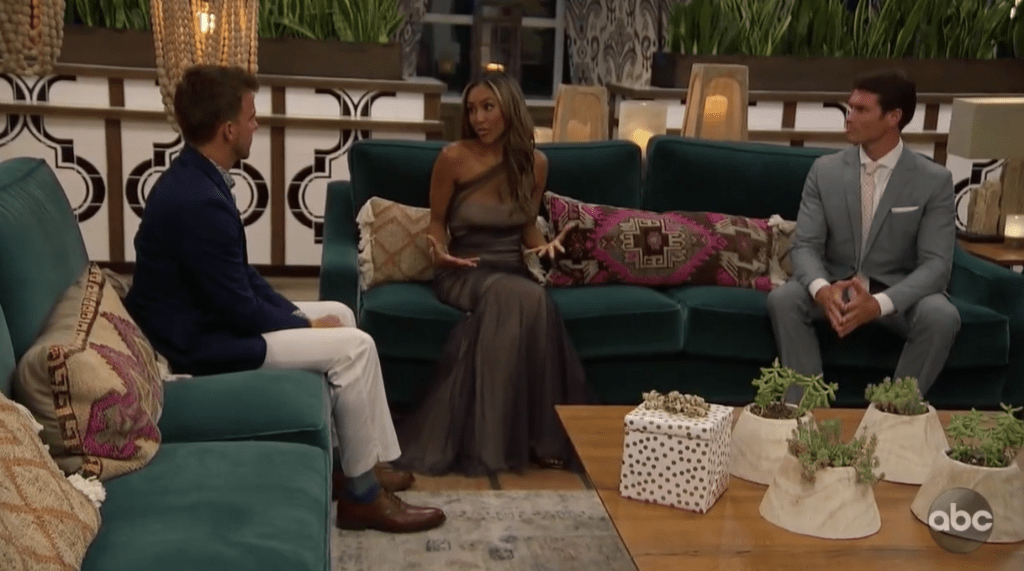 Bennett started things off with a bang by bringing Noah a condescending gift that included a red bandana, used socks, and a book on emotional intelligence. Who does he think he is, Taylor Nolan?

Clearly, the gift was a dick move, but as Bennett doubled down on it I started to think maybe he was being sincere. He said, “I’m not trying to belittle you, I’m trying to love you up,” and I kinda…believed it? Did I drink the Bennett kool-aid? Is it possible that Bennett is just terrible at reading social cues and what we thought was sarcasm was actually awkwardness?

Or maybe he actually sucks that bad.

Either way, the episode ended before we could find out who Tayshia kicks out of the bubble.

All I’m saying is that Noah looks like an elementary school bully and Bennett looks like a Christian Bale in American Psycho; so, if it were up to me, they’d both be gone.

Next week there will still be ten men left on the season and only a few episodes left, so Tayshia better hurry it up if she wants to get engaged before Christmas. Do it for America, Tayshia. We need this.

The Cool Table@thecool_table
1.0K Following 1.0K Followers
@jamiesrule @jamadoria @coolstorymere I know you know this, but I"ve had pixie cuts off and on since 1997 and m*n h… https://t.co/VsXyyN7PpC
3 hours ago
4
@LSULeslie @schizoreads I’ve legit never even heard of this
3 hours ago
@chels__ebooks Yes! Josh O’Connor supremacy! I watched this right after I got obsessed with The Durrells ❤️❤️❤️
3 hours ago
@maria_gb75 Keep him
3 hours ago
@baskinsuns AGREED. I love love loved that as a kid (and vowed to be able to do it so someone would love me)
3 hours ago
1
Archives
Entertainment, Netflix

Behind the Scenes of The Hating Game