Pull up an abnormally heavy wainscot chair and have an uncomfortable seat: I have a story to tell you. If you were to travel through some standing stones to 2013, you would find a nascent internet author with a love of the Outlander books by Diana Gabaldon absolutely messing herself over the idea that her favorite books were coming to tv. Then, she wrote a little treatise on the casting of her favorite male character of all time and a fandom exploded into her life.

Dozens of cast interviews, red carpets, premieres, set visits and recaps of every.single.episode later, dipping my toes into the Outlander waters is like stepping into a warm bath, familiar and comforting but bound to get cold faster than I expected. But since Outlander season 5 is ramping up for its premiere on February 16th, it’s time to get down to it.

We did this already with season four’s key art. Just like in this, Jamie and Claire looked like this romantic, fiercely inimitable force to be reckoned with. Even their hair looked good. And while season four had its moments (remember how good Savages was?), that key art was not a good representation of the story-telling that season. And so this … 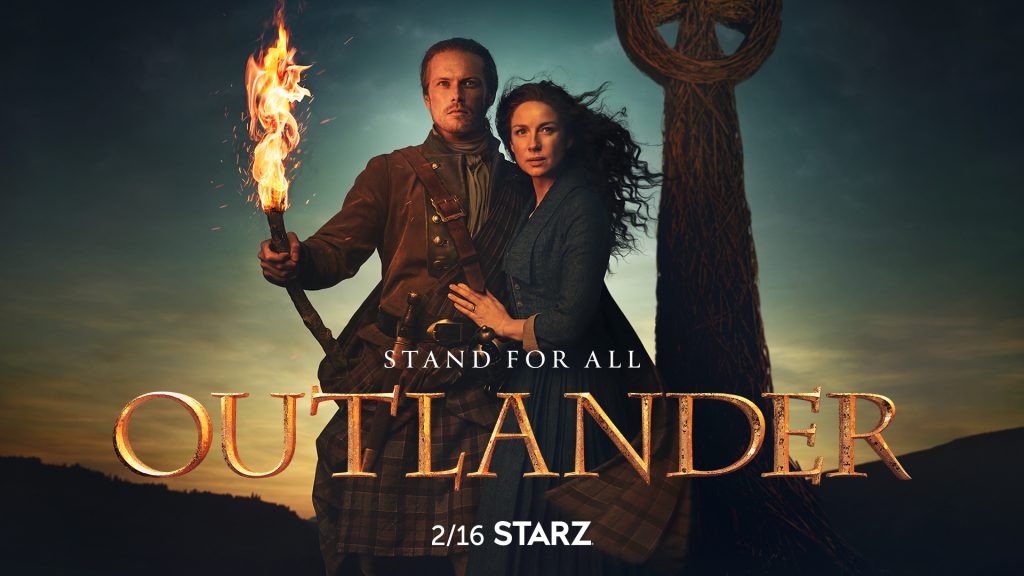 … got me all excited and flusteried but also like SUPER wary. My initial “I LOVE THE FRASERS!” gave way to “DON’T YOU DARE RUIN THE FRASERS FOR ME.”

First up, appreciate DEM WIGS because they’ve been a trash fire since season two. But more than anything we are all simply ecstatic that THERE ARE NO BANGS APPARENT. If there was ever a reason to rejoice, it’s that they burned away the last remnants of JAMMFringe in the fires of that totally notracist cross.

Secondly, I love that romance novel pose with the flowing hair and the strategically placed hand. That hand, that hair and (let’s be honest) Jamie holding that big stick, are doing the work of evoking all the sexy feels that we get when we think of Jamie and Claire. Pose, Frasers.

BUT it’s that Fraser plaid wrapped around them BOTH that got my sinuses acting up. The Fiery Cross (the book that season five is based on*) opens with the very very long Gathering, which supplied the far-flung Scottish settlers with a sense of alliance, community and legacy. We haven’t seen Jamie in the kilt of his clan since season two, and we haven’t seen Claire in Fraser plaid in I don’t know how long. Any and all callbacks resonate … well.

*huge speculation here that season five will also cover events in the sixth book, which has been hinted at but not confirmed

And that Celtic Cross. Well. It’s a choice. According to one interview, they thought it “looked cool” and are completely ignoring both the religious origins and the racist derivatives of the burning cross. Oof. Trying to place Outlander in its own time without stepping on how that time relates to this one, especially when it’s a TIME TRAVEL show, is one of the biggest issues of the entire production. If they wanted to avoid the Latin cross-burning imagery in season 5, fine, but maybe be consistent and don’t engage in gratuitous lynching, and be thoughtful and have talking points prepared to address it. For more on this, see this great thread.

Let that Choral Track Take You Away

If you’ve had the Skye Boat Song on the top of your Spotify playlist since 2014, then you’re probably ready for this entirely new version of the opening credits to Outlander season 5. You need something new to listen to while you bathe by candlelight in sandalwood essential oils.

If you are like me, a good old mezzo who loves a complicated choir arrangement, you’re just sitting here wondering why those sopranos are getting the melody like that and where that tempo is coming from. But I like seeing those Sam Heughan and Caitriona Balfe producing credits, so it’s fine.

The Trailer of My Fandom Dreams

I know without a shadow of a doubt that I could subsist completely, as an Outlander fan, on nothing but the books and these trailers. I realize that no trailer exists where there is no show, but just imagine for a moment a time in 2010 when you were reading The Fiery Cross (over several months bc let’s be honest about that book), and you started looking for fansites or forums or fanworks or something to swoon over, and you found a fanmade trailer on YouTube that was … this. I think I would have finished the book A LOT faster.

Trailers are meant to evoke emotion, excitement and discussion and debate. This really does that. The Gathering doesn’t look interminable, the season arc looks cohesive, and Jamie looks … GOOD. Is that all it takes to suck in a cantankerous OG fan who really hated season four? Looks like all muskets point to yes.

Start me out with Claire, a voiceover and a look back and where she’s been. Remind me that Jamie is hot and in charge and in love with his woman. Throw in Jemmy’s sweet face in a bonnet. Show me that Bree is still better than Roger. Throw in Leader!Jamie unable to handle his men dying (falling to his knees!!). Don’t forget that Claire is an excellent healer and doesn’t need to take anyone’s shit. Shout out that the changing the future thing is bad. Then …

… murder me with this. JAMES ALEXANDER MALCOM MACKENZIE FRASER, Laird of Broch Turach, highland warrior, Jacobite leader, ambidextrous mercenary in the French army, dragoon-killing, God-fearing Catholic boy and lover of my soul is WEARING THE ENGLISH REDCOAT?!?!?! Excuse me while I peel out of my skin and turn into a puddle of Scots-loving tears.

Why is this in the trailer though? To my recollection, it’s not in the books, so it’s a beautiful bit of spoiler. Sure, it’s evocative, obviously, but who gives the milk away for free? Seems like Sam agrees.

Yup. Big moment. Huge spoiler. Not sure why it was included! Can’t wait for you all to see! https://t.co/eIVv28zxfd

But, it worked. I’m hooked. Because right after that, we see the sexy stuff, and dammit. You got me, Starz. I’m here for season five, you bastards.

Hangoutlander at The Cool Table

And speaking of it, we’ve never let a season of Outlander pass us by without going to GREAT heights to talk about it with all of you. That has not changed. Hangoutlander, our live hangout show dedicated to all things Outlander, will be back THIS MONDAY night, January 6th. Subscribe to our VERY NEW YouTube channel to get notified when the link goes live. 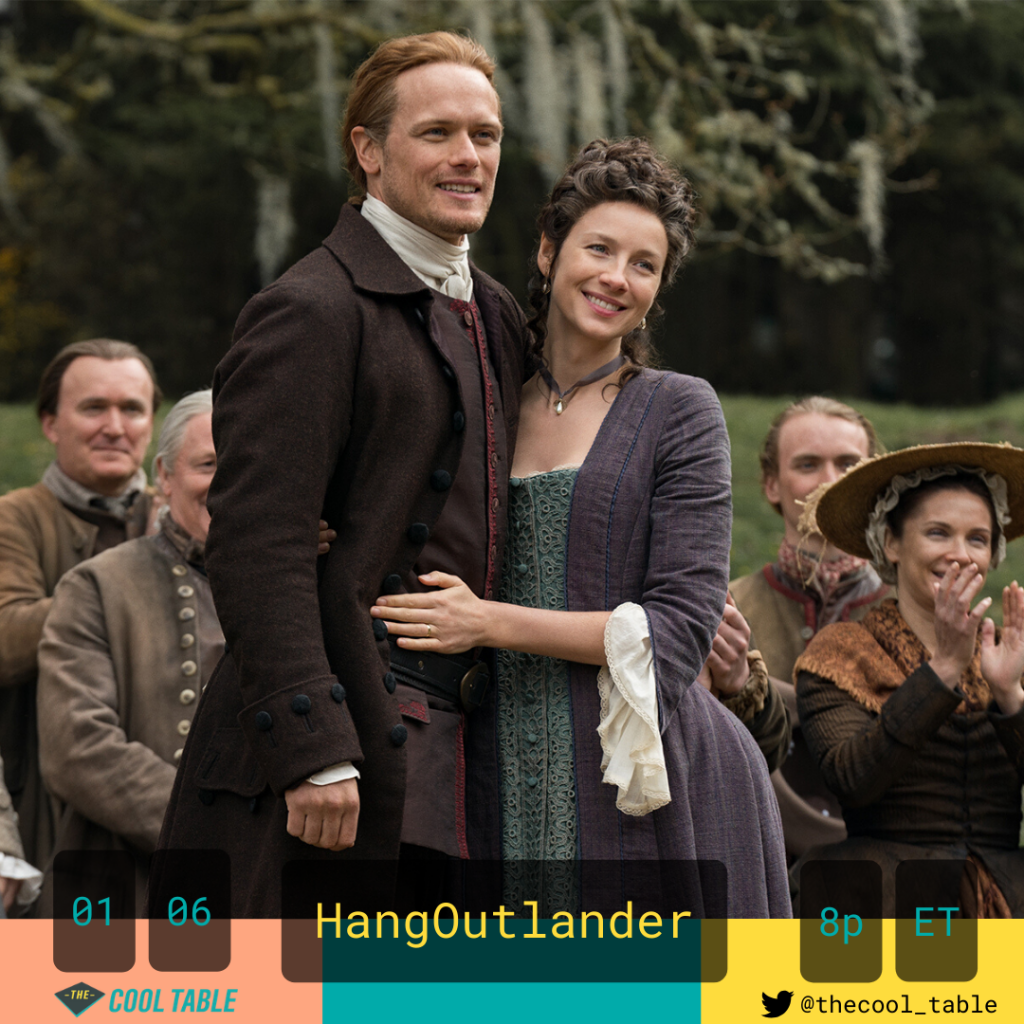 Our first hangout will be a book club for The Fiery Cross. Not the whole thing, calm down, we are not sadists. Just Part One. If you can get those 160 pages read by Monday night, you’re golden. I might not, but I’m still leading the conversation.

The Cool Table@thecool_table
1.0K Following 1.0K Followers
@jamiesrule @jamadoria @coolstorymere I know you know this, but I"ve had pixie cuts off and on since 1997 and m*n h… https://t.co/VsXyyN7PpC
3 hours ago
4
@LSULeslie @schizoreads I’ve legit never even heard of this
2 hours ago
@chels__ebooks Yes! Josh O’Connor supremacy! I watched this right after I got obsessed with The Durrells ❤️❤️❤️
2 hours ago
@maria_gb75 Keep him
2 hours ago
@baskinsuns AGREED. I love love loved that as a kid (and vowed to be able to do it so someone would love me)
2 hours ago
1
Archives
Book List, Books, Fantasy, Romance