Tayshia Just Blew Our Minds on The Bachelorette’s Hometown Dates

Tayshia Adams is only one week away from handing out her final rose on The Bachelorette which means it’s time for ABC to start shoving episodes down our throats like your boozy aunt with a pitcher full of egg nog. Bottoms up, because this week they’re serving us a final four, the Men Tell All special, and hometown dates.

At this point in the year, I’ve seen more of Clare/Tayshia’s boyfriends than I have the majority of my family members.

Daddy Chris is Back!

After leaving the La Quinta bubble to drop his son off at college, Chris Harrison is finally back where he belongs and JoJo Fletcher is collecting unemployment. Never do that to us again, Chris. No one even reminded us that there was only one rose remaining at the rose ceremony. It threw my whole week off. 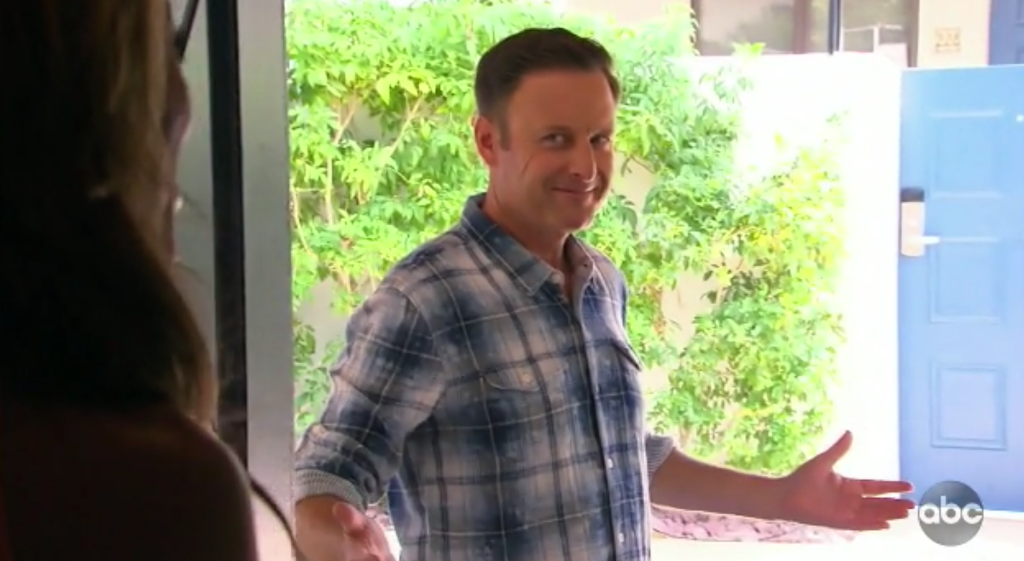 Fortunately, Chris and Tayshia had a quick gab sesh where he widened his eyes and nodded his head a lot. That’s how you know it’s serious, guys. The important thing to know is that there are only 8 men left on the season and hometowns are up next. Tayshia told him that the honeymoon season is over, which is crazy because, again, she has 8 boyfriends. There’s zero chance she even knows their middle names; the honeymoon is most certainly not over. Chris reassured her that no matter who she takes to hometowns it’ll be fine because all of the men are great, and “at this point, you’re just splitting hairs.” I mean, no Chris, we may not have been able to tell these men apart until literally last week, but they’re technically not interchangeable. They’re not legos. 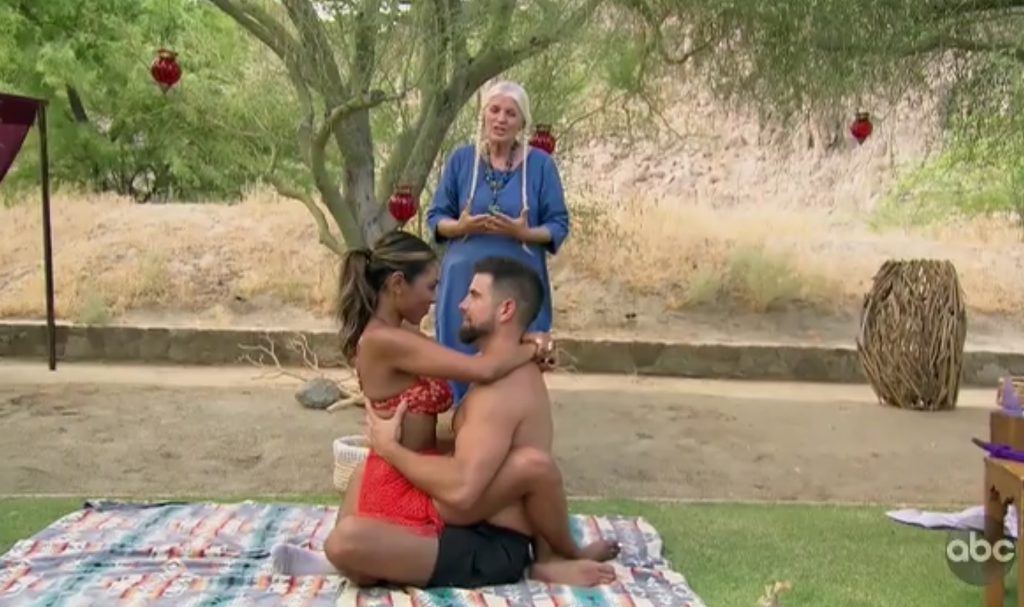 Somehow Bearded Blake made it all the way through Clare’s season and most of Tayshia’s before getting a date, but tonight was his night. Sort of. Tayshia and Blake had one of those classic Bachelor dates where a reiki shaman/crystal master name Gita with Willy Nelson braids made them do tantric yoga poses. Blake was like, “Yes! We are in love!” But Tayshia was like, “Eh, you’re not it for me.” Much to his surprise, she sent him home in the middle of the date. Much to my surprise, she fell to the ground sobbing as his SUV of shame drove off. I…for Blake, the guy who sculpted a dick on their last group date when he was asked to make something to represent their relationship? Maybe she needs a nap.

Once Tayshia broke the seal on dumping guys she sorta likes, she decided to rip the bandaid off and keep the pain going. She stormed into the men’s communal living room and sobbed on the couch that she’s, like, really trying. Ben awkwardly patted her shoulder and Noah handed her a rough paper towel to dry her tears. Now I see what Chris meant about splitting hairs. 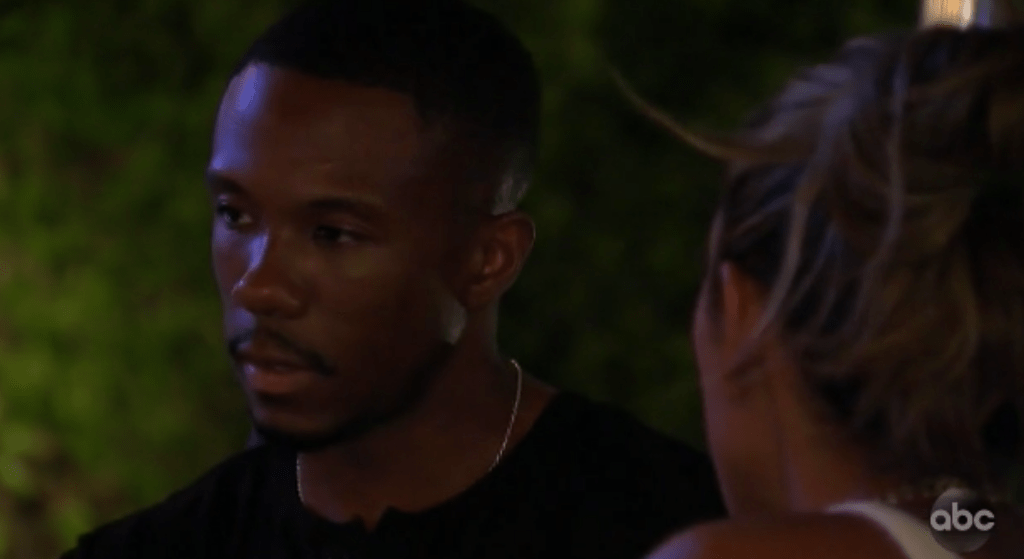 Then she sent Riley home. You know, the man who spilled his deepest held secret about changing his legal name due to childhood trauma just last episode. In the words of Riley, “why didn’t you just let me be?”

Uh, because this is better TV, Riley.

Tayshia decided to skip straight to the rose ceremony since she has been stupid obvious about who her top four would be for weeks. Ben, Zac, Brendan, Ivan, and Noah were briefly terrified when Bougie Bennett showed up at the last minute, instead of being back home at a Harvard alum mixer like they expected, but they shouldn’t have been. The roses were never going to go to Noah or Bennett. They should have been sent home during the two-on-one like we all said.

The Men Tell All Was…a Lot

There’s basically nothing I enjoy more than watching gorgeous men who were recently dumped by their shared girlfriend fight on stage while Chris Harrison moderates.

The Men Tell All episode is my mecca.

Sadly, thanks to Covid we didn’t get to see the audience reaction to such classics as Ed making fun of Chasen for being stupid or when they made dick jokes about Blake. Curse you, 2020! Is nothing sacred? I never knew how badly I needed to see B-roll of women in business casual clothes shaking their heads at each other in disgust. We’ve been robbed. 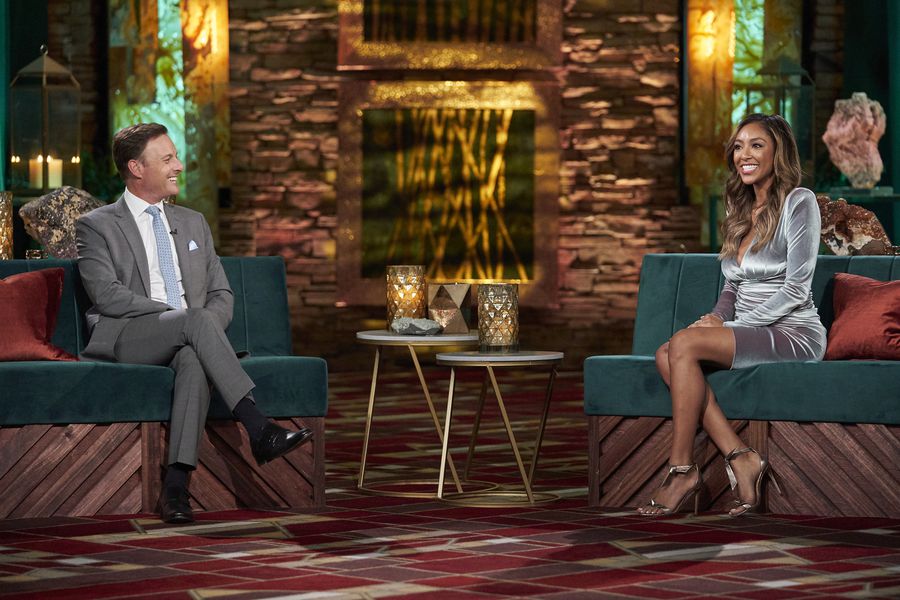 There were three main segments:

2)Yosef doubling down as a misogynistic monster.

3)Tayshia looking gorgeous while she soothed her exes’ bruised egos.

Bennett tried to smooth things over with Noah, but Noah wasn’t having it. He ended their segment by calling Bennett an, “ostentatious Harvard d-bag.” We’re definitely going to see them fighting over Hannah Ann on the beach.

Yosef, the guy who yelled at Clare for no apparent reason other than his own inflated sense of self-importance, refused to apologize. All of the men yelled at him with increasing furor and Chris Harrison pleaded with him to help himself, but Yosef was like, “Nope.” Toxic masculinity is a hell of a drug.

Finally, Tayshia came out looking incredible to rehash each of her more recent break-ups. Honestly, we just watched Blake and Riley’s break-ups like 30 minutes before, so this was boring to me. However, it did give Tayshia another chance to cement just how great she is in this role.

For you, you could skip most of the Men Tell All but please stick around for the credits when Bennett handed out green juice to each of the men, including one in a sippy cup for little Noah.

There is yet another episode of The Bachelorette this week, so come back Wednesday for my recap of Tayshia’s hometown dates. I’m dying to know if they kept the final four families locked up in quarantine with Gita the reiki guru and the two nude models. Please say yes.

The Cool Table@thecool_table
1.0K Following 1.0K Followers
@jamiesrule @jamadoria @coolstorymere I know you know this, but I"ve had pixie cuts off and on since 1997 and m*n h… https://t.co/VsXyyN7PpC
3 hours ago
3
@LSULeslie @schizoreads I’ve legit never even heard of this
3 hours ago
@chels__ebooks Yes! Josh O’Connor supremacy! I watched this right after I got obsessed with The Durrells ❤️❤️❤️
3 hours ago
@maria_gb75 Keep him
3 hours ago
@baskinsuns AGREED. I love love loved that as a kid (and vowed to be able to do it so someone would love me)
3 hours ago
1
Archives
Current Events, News, Politics, Sports

Tayshia Just Blew Our Minds on The Bachelorette’s Hometown Dates