There are very few things in this life that I’ll voluntarily commit three whole hours of my life on a random Tuesday night to watching. One is my kid’s third-grade class performance of Hot Cross Buns on the recorder. The other is Bachelor in Paradise.

Unsurprisingly, they’re both equally as hard to watch as the other.

I never want it to end.

When we last left Paradise, Aaron had a vein popping out of his forehead and his angry mouth inches away from Ivan’s at the cocktail party. This week’s episode opened with the same ripe tension.

The last time I saw two men get in each other’s faces like that it was two dads at a soccer game for eight-year-olds, so this seems like a party to me.

Anyway, Aaron was mad at Ivan for making out with his most recent love interest, Chelsea. In any other normal situation that would be a totally valid complaint, but this is Paradise, bro. Plus, this same scenario has happened to him like three times in the last few weeks. He should be used to it by now.

Then again, there is a Rose Ceremony in only a few short hours so maybe Aaron has a point. I hate when that happens.

The fight diffused without any punches being thrown and then the two men retreated to their corners for pep talks.

Aaron’s bromance partner, James, told him that he should talk things out man to man and not let Ivan get away with it.

Ivan told everyone who would listen that Chelsea approached him first and he didn’t do anything wrong.

Chelsea (and footage the show aired because this entire show is being recorded from every angle and you’re an idiot if you try to lie to everyone when they have the receipts) proved that she absolutely did not approach him first.

In conclusion, Ivan is a lying liar who lies.

And my theory that you should never go to Paradise if you got a good edit on your initial season of The Bachelor or The Bachelorette lives on.

At this point, the only way Ivan was going to make it through the Rose Ceremony was if a miracle from heaven came down to the beach. Instead, Wells walked in and asked to speak to him.

Remember those receipts I mentioned before? They have them from the hotel where the cast spent the previous night during that mediocre tropical storm too.

Apparently, while he was at the hotel where the cast was sequestered to their rooms, Ivan found a producer’s phone which he snooped through to find which room Alexa was staying in.

Alexa? Who’s Alexa? Well, she’s the gorgeous reject of Peter Weber who had a romantic evening with Ivan without being exploited on camera.

We can’t have that.

Ivan sheepishly said love made him do crazy things and then he exited the show with tears in his eyes and strong “I’m not mad, I’m just disappointed” dad vibes from his friend Riley.

All I’m saying is that we should think about harnessing the power of the Bachelor production team because the man is a literal aeronautical engineer and not even he could hide.

After Ivan’s exit, the Rose Ceremony didn’t have a lot of big reveals left in it. Sure, they wanted us to care who Tia’s dancing vagina chose between tatty daddy Blake and nice guy James, but we just don’t.

The match-ups are as follows:

Joe and Serena (Totally in love)

Noah and Abigail (Committed since the beginning but zero chemistry.)

Riley and Maurissa (So much chemistry it makes me want to die.)

Kenny and Mari (Ruined Taco Tuesday for me.)

Thomas and Becca (She likes them tall and slightly villainous, huh?)

Aaron and Chelsea (Enjoy your paid vacation while it lasts.)

Ed and Natasha (I can’t believe she hasn’t left the beach yet.)

James and Tia (No chance this works out.)

That meant Blake, Demar, and Dr. Joe were sent home. I mean, it’s fine, I mostly forgot they were there anyway.

There are still two hours left in this episode and Wells Adams is now officially the guest host. I know a lot of people were hoping this would be his moment to announce that he was taking over for Chris Harrison permanently, but news broke today that that wouldn’t be the case.

Please pause for a moment of silence for how entertaining that would have been.

In his first act as host, Wells welcomed Anna to the beach. Yeah, there are still people showing up in Paradise.

You’ll remember Anna as the mean girl who accused someone else on Matt James’ season of being an escort. Now you’ll remember her as being the woman who rolled in cinnamon and sugar to make a human churro on a date with James.

I don’t know who has a food kink on this season, but we need to talk.

Anyway, James and Anna went on a date. They made human churros (which aren’t a thing), got massaged by giant pythons (also not a thing), and made out in a hot tub (definitely a thing.)

They’re cute together, but the best part was how mad Tia was about the whole thing.

Whose vagina is dancing now?

Give Me Facial Expressions

I once made a meme of Mykenna’s face that was seen by over 3 million people, so to say I was looking forward to her entrance to Paradise is an understatement.

I have no idea how she got put to the back of the cast list. She’s cute, she emotes like a champ, and she’s definitely going to cry. She’s made for this show.

Sadly, she showed up a little too late so when she asked Aaron to go on a date with her he was all, “Sorry, the timing is not right.”

She stood and looked sadly out into the ocean where she contemplated leaving the show right then and there when Ed ditched Natasha and asked her to take him. She looked him up and down and said, “Nothing against you I just don’t think the timing is right”

When I tell you I gasped.

Ed told her that she wasn’t going to get a flight out of Mexico that night anyway so she ended up relenting. They spent the evening rollerblading around the hotel grounds before a romantic dinner surrounded by disco lights.

It looked like they were vibing, but I was super distracted by the way their skates lit up like a pair of toddler’s shoes so I can’t confirm or deny.

There’s Still an Hour Left of This Show

Back on the beach, Kenny has been freaking out because a proposal is right around the corner and he’s afraid he and Mari aren’t being passionate enough anymore.

They’ve been spending most of their free time in a boom boom room at a Mexican resort without air conditioning, but sure, the passion is lacking.

The producers could see him spiraling and they couldn’t afford to lose one of their few remaining strong couples so they sent a literal witch to convince him he’s in love.

No, like a Mexican Bruja randomly showed up on the beach to talk to them. She said that the spirits had sent her because she sensed that they were losing their passion. You mean, the exact thing Kenny had said in his on-camera interviews? Spooky. 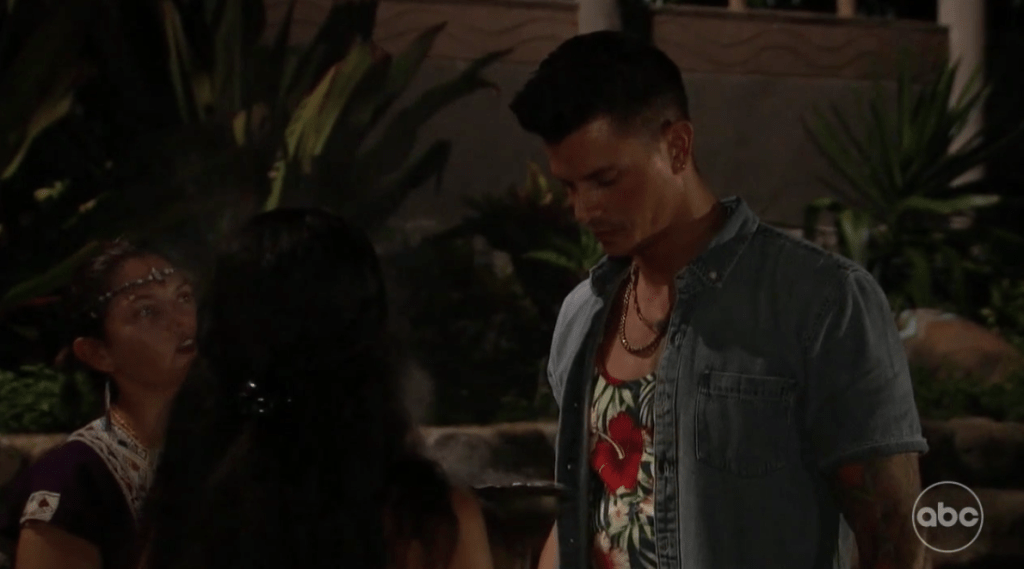 By the end of the bruja’s intervention, Kenny gave his leading man monologue.

Prepare yourself for this one.

Meanwhile, Thomas was watching the whole thing going down like he was the narrator of a Discovery Channel documentary about indigenous Mexican culture. Becca’s taste remains a questionable mystery.

There was no reason to let the disco balls from Mykenna and Ed’s date go to waste so Wells is throwing an eighties theme Paradise Prom.

Thanks, I hate it.

Everyone ran around doing promposals, handing out corsages, dressing in eighties clothes, and teasing their hair. But I couldn’t stop staring at Jame’s two-toned suit jacket. One whole side was black and the other was white. Was this a thing?! Someone explain it to me in simple terms.

I could not care less about this prom other than how amazing the cover band was. They almost make me want to apologize for all the times I’ve made fun of musicians in these recaps including that whole season in Nashville.

I won’t, but almost.

They handed out superlatives. Joe and Serena were crowned King and Queen. Tia and Aaron made out.

HOLD UP. Tia and Aaron are making out now? I quit.

Break-Up on the Horizon

Earlier in the episode, Noah told Abigail that he was falling in love with her and she went totally blank-faced. Like no lights were on and nobody was home.

On the one hand, that’s awkward. On the other hand, the woman is quite literally deaf, and maybe, just maybe, she needs a minute to process verbal words.

Too bad, because it was one rejection too many for Noah who had already worked way too hard to keep this romance alive.

At prom, with truly terrible timing, Abigail was realizing how real her feelings were for Noah at the same time he was realizing that it’s over between them.

He sat her down and told her that he cares about her, he even loves her, but she’s not right for him.

She was like, “then what the hell was that all about last night, dickface?”

Just like that, one of the longest relationships of the season was over in less time than it took for Abigail to remove the velcro corsage from around her wrist.

That’s it for the penultimate episode of Bachelor in Paradise 2021 is behind us. Next week is the three-hour finale where it looks like there will be heartbreak, love, and…hold up, is that Kendall on this beach again? Please tell me no.

The Cool Table Has a Podcast Now!@thecool_table
982 Following 911 Followers
RT @HeidiRochelle: A guy on night one brought a dossier about Michelle Young and I’m only mad because he was so inept at hiding it. #thebac…
32 mins ago
1
Michelle Young Did Not Come to Play On The Bachelorette Premiere https://t.co/NRpNHMCWC5
6 hours ago
1 1
I love Gerri but I’m #TeamKen all the way baby https://t.co/1bGADf9JGl
1 day ago
RT @BeaDeeH: Made my picks, have my calendar reminder set to not forget next week. Come play with us!
2 days ago
2
Next it’s time for you to join our #thebachelorette fantasy league https://t.co/ZBidERlJa0
2 days ago
1 1
Archives
Entertainment, The Bachelor, TV

Bachelor in Paradise Recap: Brendan and Pieper Who?