Back when we had a very shaky list of episode titles for season five of Outlander to occupy our time, we knew that “Between Two Fires” was likely to refer to Jamie’s cross-purposes and double allegiance to both the governor who gave him his land and livelihood, and the godfather who protected him as a bairn and a laird. Now that we’ve watched  Outlander episode 502, that split allegiance is more obvious than ever (like an anvil to the head obvious), but the reasons why Jamie is allowing it are less clear. As a bridge episode that connects the happy opening of the season to the stickier dramas that are set to unfold, it worked well, but it left me with a few bad tastes in my mouth … and they aren’t mercury or mold. But first …

I just noticed for the first time in the opening credits that someone is holding The Hanged Man tarot card. I cackled.

We’ll get to the actual opening scene in a moment, but the first real scene of the episode, in which Mrs. Farrish brings her husband to Claire for medical help and he subsequently dies, had me in my actual feelings for a bit. I cried. And while I am not ashamed at all to admit this, I will say this one thing which may shock you all: it was Sophie Skelton’s reaction that pricked my sinuses. I know. But truly, Bree’s realization that the mercury pills would preclude her mother from being able to do anything to help the man was more emotional for me than even Claire’s reaction. No one is more surprised than I am.

It seems ridiculous to bring this up, but the look back at the top of the episode that showed Jamie talking to the regulators from last season starkly reminded me that we are in an entirely different show now that Jamie and Claire’s wigs are correct. I will never be able to forget Jamie’s nightmare fringe from season four, but I don’t think I’ve properly discussed just how much better a good wig makes a good man look. Likewise, Claire’s hair had its moments last season, but her current tousled curls and messy grey are perfection. It matters.

Give me all the homeopathic conversations, old wives’ tales turned into real medicine talk and Claire conducting surgical inquiries like a competent lady boss ALL.DAY.LONG. I love that the impetus for Claire deciding to grow penicillin was the loss of a patient, especially since in the book it seems like a generic idea that floats to the top of her massive to-do list. (Speaking of to-dos, is she making Etsy jewelry while the other women are making tallow tapers?). I mean, yes, it makes sense for Claire to want to culture the right molds for the basic antibiotic without a catalyzing tragedy, but it still makes sense, adaptation-wise for it to be precipitated by a loss of a patient. 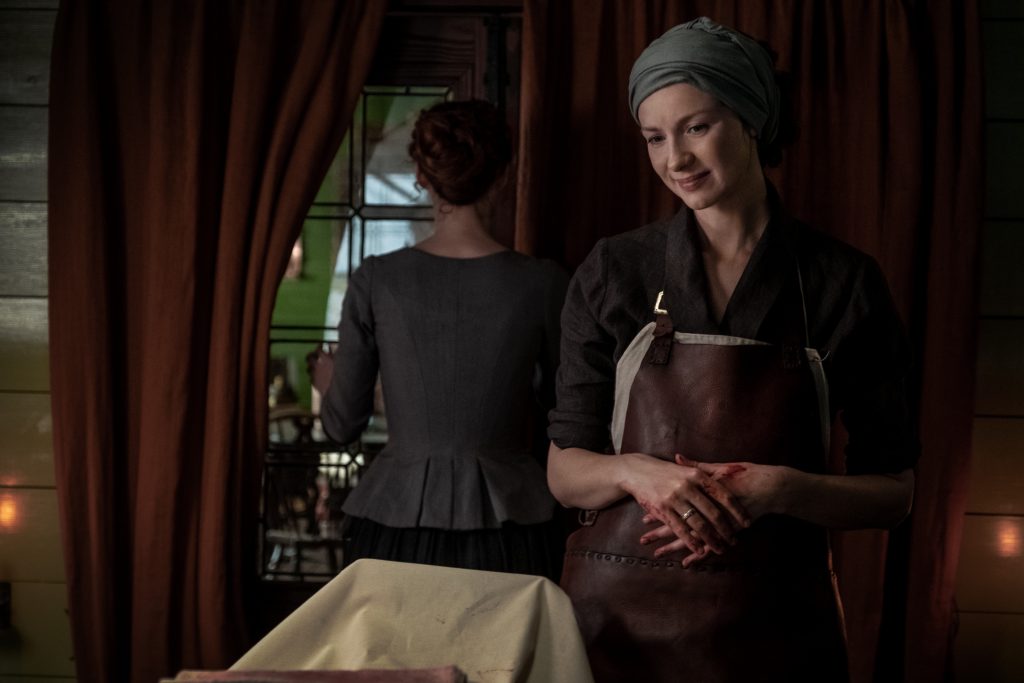 I could do without some of the more patronizing and banal dialogue that we almost always get subjected to when Toni Graphia writes an episode. See: “It’s bad enough I’m fighting the disease; I’m fighting the cure too.” Wooooooof. If we have to be bowled over like this, at least let Caitriona get het up about it. I’d buy this line a lot more if a frustrated, impulsive Claire was righteously pissed while delivering it. In summation, less Dr. Quinn. More Dr. House.

The subtitle of this episode should have been, The One in Which Jamie Stares Everyone Down Until They Get His Meaning. Thanks to this wig and Sam Heughan, Jamie is infinitely watchable in this episode. He’s cautious and deliberate and well-respected, and that is how we like him. 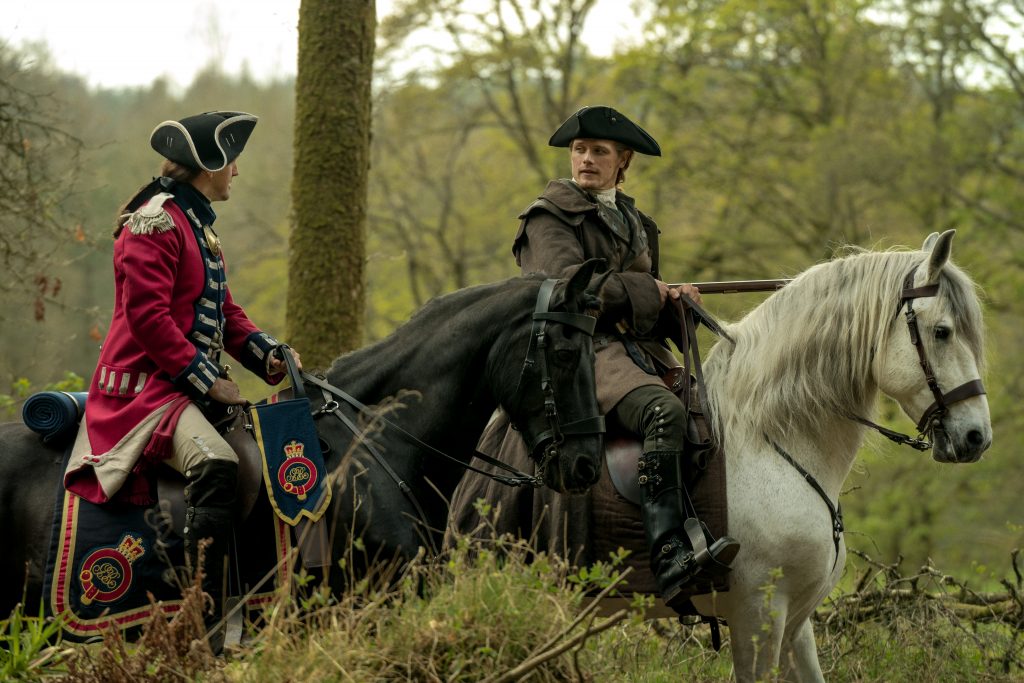 However, it should be more that he is taking the measure of Lt. Knox (not the other way round), and subtly influencing Knox to Jamie’s own way of thinking, than it is that Knox’s impulsivity and worldview are pushing Jamie to unwanted ends. We know that his contract binds him to raise a militia. That’s what last week (and several scenes last season) were about. Why is that still being ordered in this episode like it’s new news?

Jamie’s influence over the Regulators seems feeble at best, and no one likes a weakened Jamie Fraser. More cunning, less telepathy please.

Claire was excellent in this episode for lots of reasons, not the least of which was that we got to see how she relates to her and Jamie’s children.

Claire and Bree have grown into a mother/daughter relationship that feels relatable and equal. She respects her daughter and vice versa. They work well together. There is mutual trust. I would still like to see Claire be her MOM when it’s needed though. As Bree chastises her for playing god, Claire’s reaction could easily have been more fierce, more: “Kid, call me when you have decades of time-traveling experience to draw on. You’ve been here an hour.” Sometimes, you just don’t want to hear it from the humans that you birthed into the world.

Claire and Roger’s relationship has always been one of the smoothest. They have a history and mutual bond of loving Bree, and there is a professional respect that hasn’t been diminished. She doesn’t hold him accountable for the same things that Jamie does. He doesn’t resent her for his lot in life. Their scenes are easy, and often welcome. Roger is often more honest with her than he is with himself, and definitely more so than he is with Brianna. I would have liked a scene where they worked together to hide the body.

But Claire and Marsali stole this episode. Lauren Lyle has brought life to a character that gets short shrift in the book for being mostly background dressing to either Fergus’ plot or Ridge life in general. Show!Marsali is vibrant and scene-stealing, and I am so glad she’s getting an enhanced role.

I love that despite Marsali’s horror at Claire, with just a word from Claire banishes the spectre of Marsali’s mother. The ensuing years that Marsali and Claire have spent together gave them that bond. And Claire’s appeal to the Creator as a way to draw Marsali into her den of disease and cadavers was inspired. Perfect scene. *chef’s kiss*

I wonder if someone thought that the female gaze would include turning an off-book cock fight into a five minute, bloody, bruising whore fight and that’s how we ended up with this brawl scene. I can’t imagine why it’s there otherwise. I have no problem turning to the ins and outs of Bonnet’s smuggling and Forbes’ machinations early in the season. And I’d love to see the return of our dandy king, Phillip Wylie.

But I could do without the brawl and the random guy who is irritated with Bonnet and loses his eyes. However, I do love the feeling of chills that Ed Speleers is capable of engendering with just a line and a shrugging on of his foppish new coat.

Roger and Bree. Bree and Roger. I can say that I feel every last minute of Bree’s frustration drudging through that underbrush hoping that Roger makes a shot. She was more alive in every moment that he wasn’t in a scene with her, even when she was drawing her rapist in a cloud of trauma. Roger diminishes Bree. He doesn’t celebrate her interests or her capabilities. He doesn’t inspire her. She endures his moods and feels badly about his bad feelings. Then she has to encourage him. “You’re a good dad, you know that?” Thanks, Toni and Luke. I was still wondering.

And Murtagh. My first note for this episode was, “Wow. Murtagh is kind of a dick.” And then I realized that I just had a problem with the writers who were assassinating the character of a character that they kept around for what exactly?

I had been ok with the Regulators storyline heretofore, even if I found it a little belabored. But the opening scene of this episode failed to make their plight even remotely sympathetic. Forget all the talk between Jamie and Knox about what a man might die for. This scene provided no clear line of the harm being done, the sides of this fight or the source of the injustice. If we are supposed to sympathize with Murtagh and his men, this episode took us ten steps back. And most unfairly, took a character who should have died a hero and turned him into a villain. Murtagh even got the villain’s shot at the end of the cold open. How is his behavior in this episode any better than Bonnet’s? After all, they both left men maimed.

Join us Monday night at 8pmEST live on YouTube and Facebook for Hangoutlander. And check out all of our Outlander coverage right here at The Cool Table!

Men in Kilts Is Bringing Scotland to Starz

Outlander and the Problem of Sexual Assault