For some people, Valentine’s Day is about romance. For others, it’s about watching an indecisive man dump one of his 12 girlfriends at Niagra Falls.

You won’t have to think as hard as Clayton Echard does about virtually everything to figure out which one I am.

What did we miss?

I had every intention of recapping last week’s Shanae shitstorm, but then I fell while ice skating with my kid and somehow managed to get a minor concussion. It turns out that the only thing worse than a concussion is writing about The Bachelor while concussed.

I did, however, watch the episode which took place in Tore-On-Toe. Oh sorry, I meant to say Toronto, I just got confused by Clayton’s horrifying pronunciation.

Gorgeous Serene got a one-on-one date at an amusement park where she told her sad backstory about her cousin dying.

Gregarious Gabby got the other one-on-one date exploring Tore-On-Toe where her silly side was infectious but her serious side made her a real contender.

The group date pitted the women against one another in a comedy roast and then clear frontrunner Rachel got the date rose.

But the big storyline was that Shanae and Genevieve were sent on a horrifying two-on-one date at Niagra Falls where Shanae became even more of a caricature of evil.

At one point Shanae compared herself to Meryl Streep for her ability to fool Clayton, which, come on now, isn’t exactly an impressive feat.

And then she threatened to throw Genevieve “like a dog” over the side of the waterfall.

Part Two of the Two-On-One

Forget cupid, tonight’s episode skipped over any pretense of love and jumped directly into Shanae’s audition as the next Disney villain. Threats of killing puppies and all.

To be clear, Clayton doesn’t have chemistry with either Genevieve or Shanae and they’re both going to get sent home eventually. But at this point in time,  I want Shanae off of my screen so desperately that I’d name my nonexistent fourth child after Genevieve if she’s the one to make it happen. 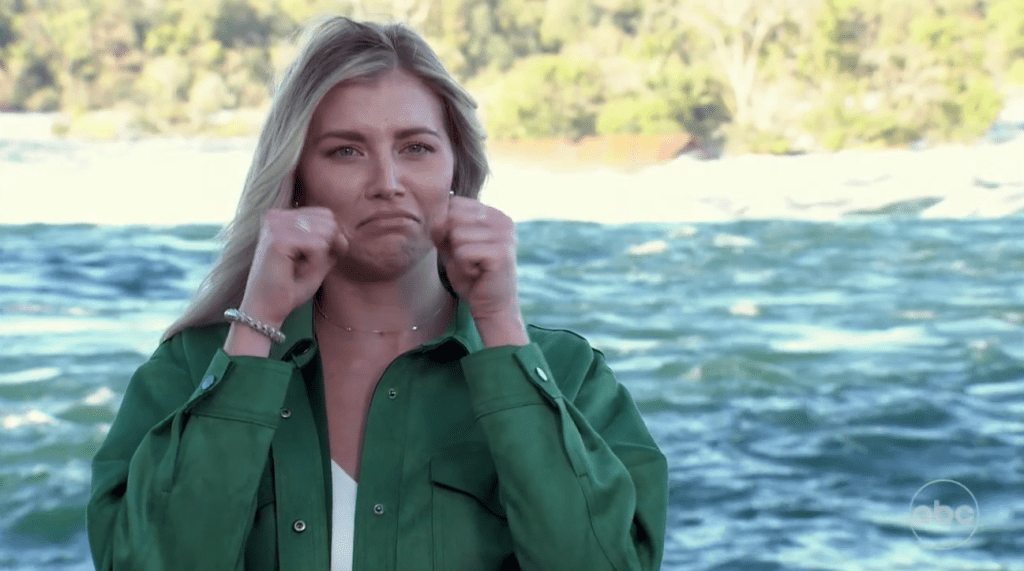 Clayton took both women aside for one last conversation before he made his choice.

Shanae even managed to squeeze out a few tears which she celebrated in an interview by yelling, “hashtag tears!”

Clayton got a little thrown off of his horrifyingly simple game by the idea that Genevieve is an actress but ultimately he finally did it.

He sent Shanae home on a ferry boat that floated into Niagra Falls. 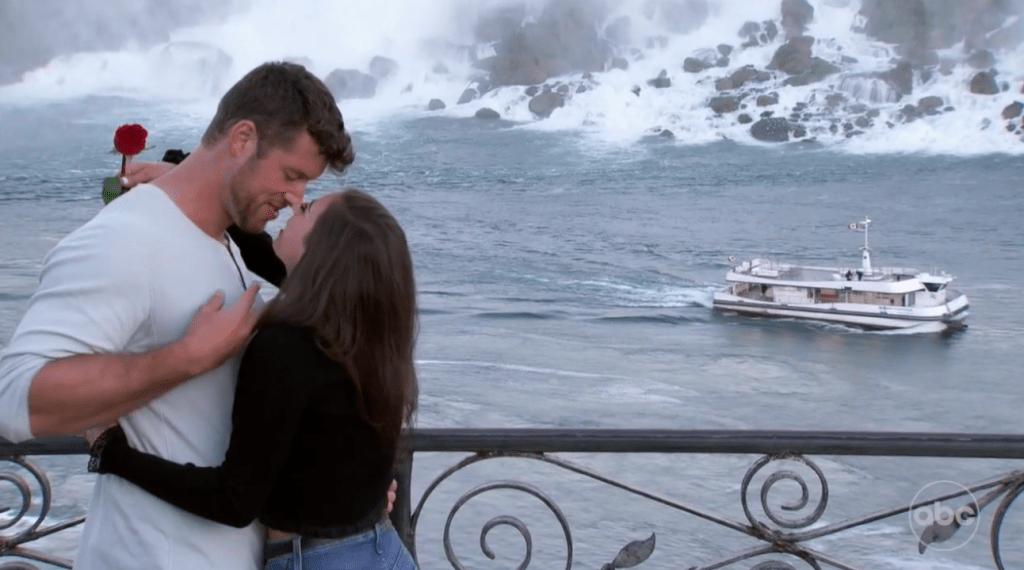 Genevieve got the date rose, but these two have approximately zero chemistry so her days are numbered.

It was a similar vibe in my living room. 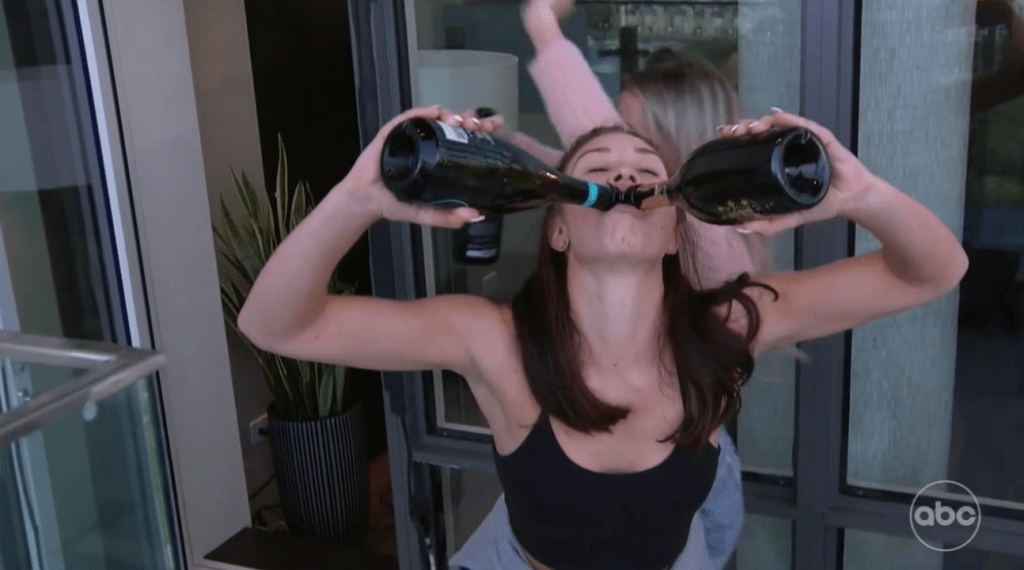 The celebration didn’t last long enough to make it through the cocktail party and Rose Ceremony though. Instead, Mara was slowly becoming more and more unhinged as she sees her future as Mrs. Echard slipping through her fingers.

They couldn’t even give us a moment to breathe without finding a new villain, huh?

Meanwhile, Rachael and Clayton were making out on a white rug so everyone else should just go home. 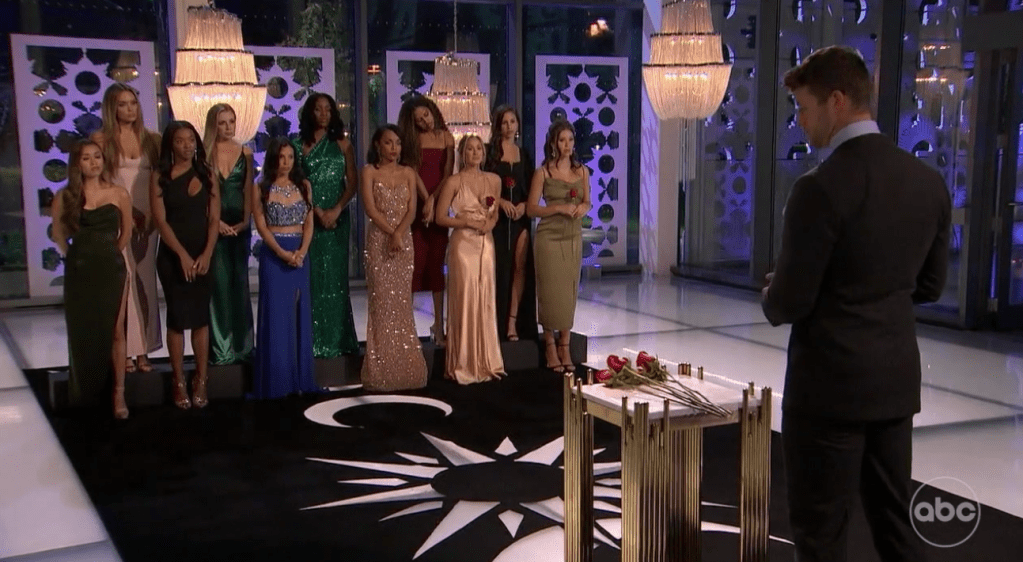 Gabby, Rachel, and Genevieve already had roses from their previous dates. The rest of the roses went to Sarah, Serene, Susie, Teddi, Eliza, and Mara.

Marlena (the Olympian) and Hunter (the complete stranger) to me were sent home.

Covid protocols are perfected and there are only nine women left to buy plane tickets for, so after two long years, The Bachelor is leaving North America again. Finally.

The first one-on-one date in Croatia went to Clayton’s first impression rose recipient, Teddi. They spent the day exploring Hvar while Teddi alluded to something she needed to tell him about. 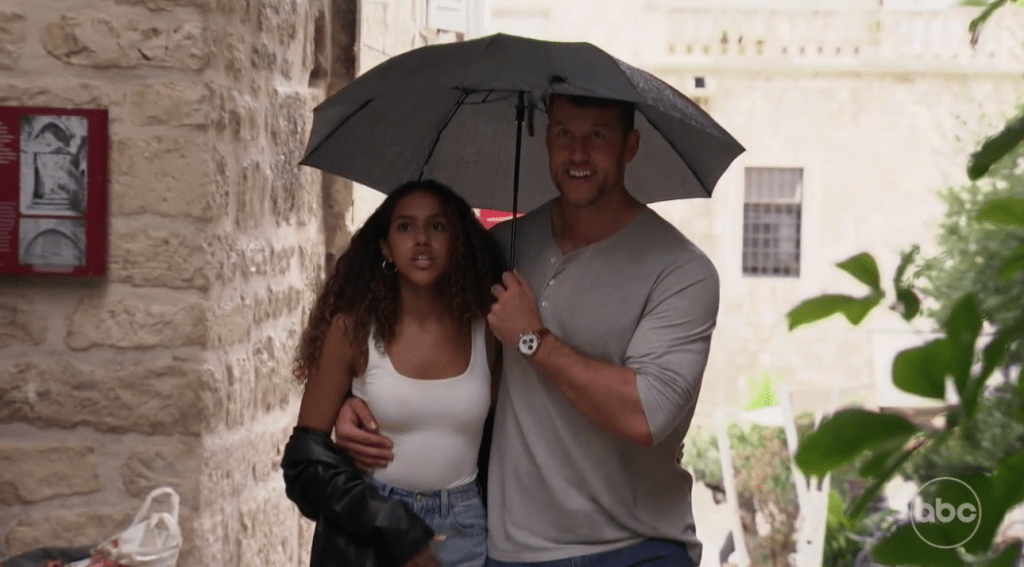 I was expecting it to be some big reveal, but once again, I strongly over-estimated this show.

It turns out that Teddi is only waiting to fall in love before having sex so that’s one…ahem…barrier out of the way.

You know the producers were salivating when Clayton’s next question was, “When will you know you’re in love?” 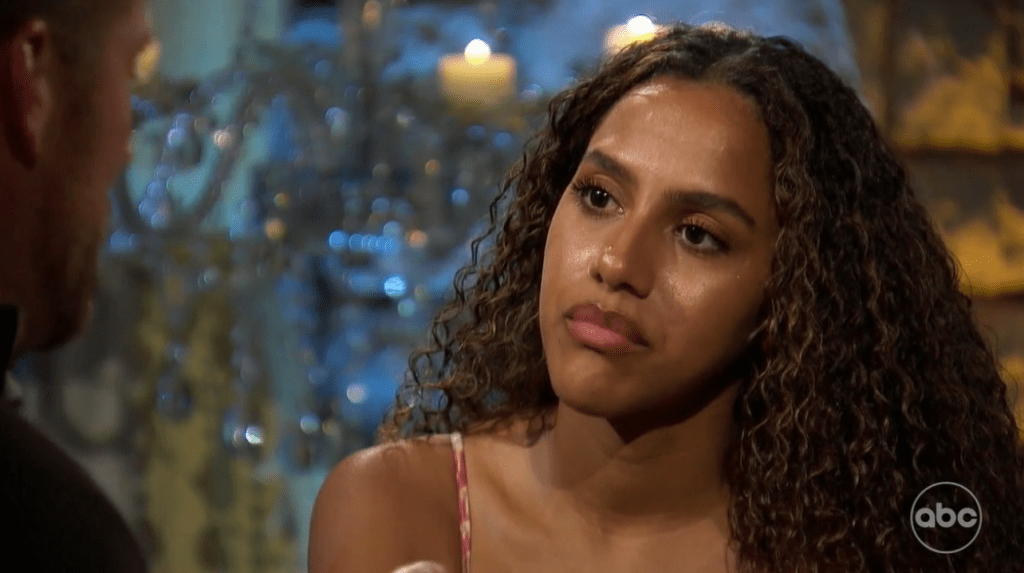 She told him that she would know it when she feels safe which made him look visibly relieved. Fantasy Suites are back on the table.

Teddi got the date rose and then they kissed while fireworks exploded overhead and Clayton’s voiceover said something about wanting her to “allow someone in.”

We all see what you did there.

The Bachelor Battle in Croatia

We’ve reached that stage in the season when it’s time to dress these women up in costumes and force them to eat boiled sheep’s brains. 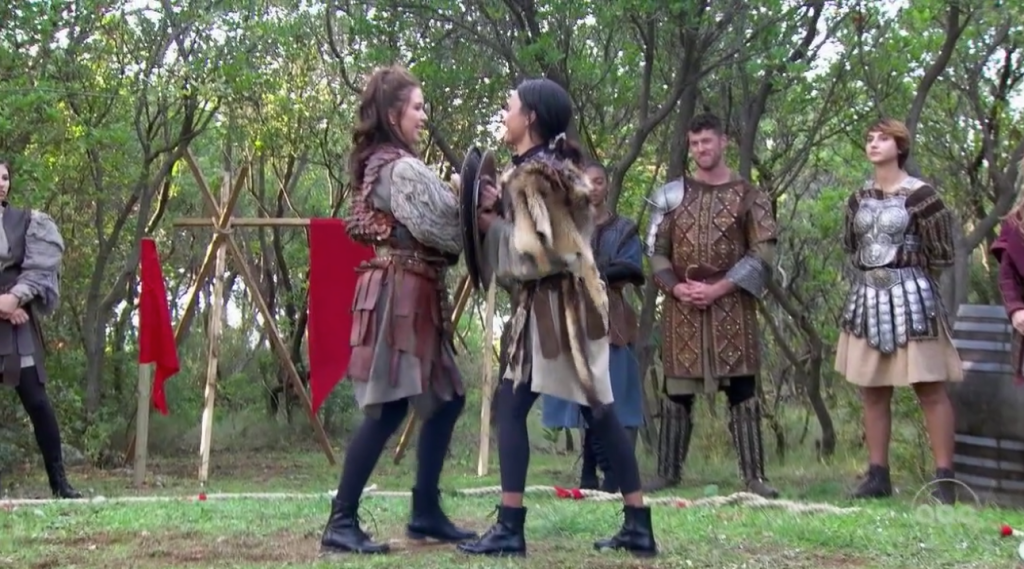 Imagine flying all the way to Croatia only to spend your one day out of the hotel dressed up as knights fighting over Clayton Echard.

I’d drown myself in the Adriatic Sea.

Thankfully Serene, Rachel, Susie, Gabby, Eliza, Genevieve, and Mara have stronger wills to live than I do because they held fake battles, ate boiled animal parts, and made declarations of love to Clayton with enthusiasm.

If you ever wanted to see seven beautiful women gag into garbage cans on a date, this is your moment.

Mara is still losing it 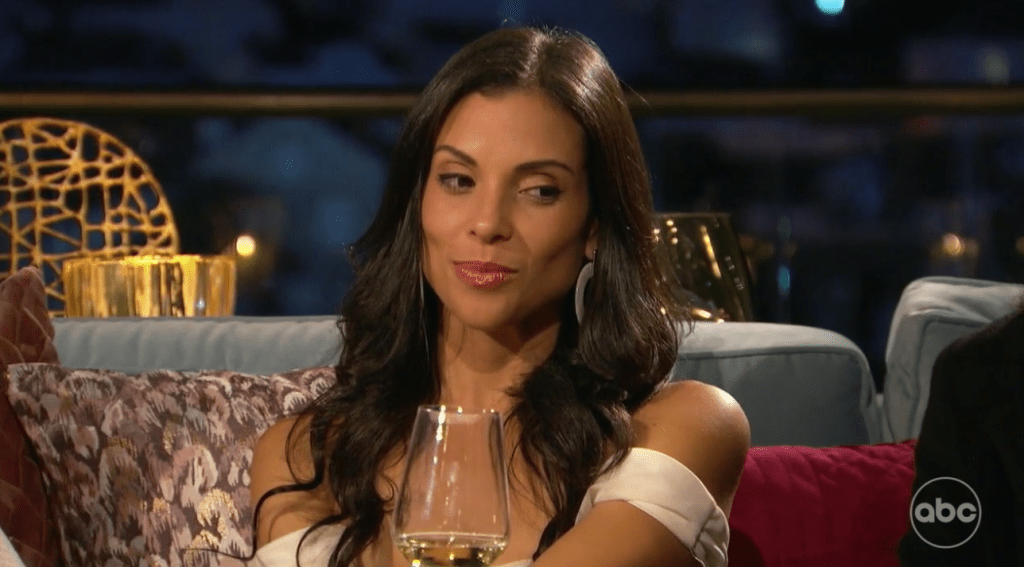 That night at the after-party Clayton was having a normal night but Mara was still on her weird rampage.

Like, yes, we get it, she’s the oldest woman left on the season (she’s basically geriatric at 32). And sure, she might be more ready for marriage than some of these other women; but you can’t force the man to love you just because you’re ready.

Mara hasn’t spoken to Clayton for more than 45 consecutive minutes in her entire life, but she still chose to spend her one-on-one time with him giving vague warnings about Sarah.

Clayton fed into it because he actually likes Sarah and does not care at all about wasting Mara’s time, but somehow Mara still thinks she has a chance.

Girl, chill. You’re like one episode away from a ticket to Paradise.

In the end, Mara looked on in shock as the date rose went to Rachel instead of her.

(But no one who is paying attention should be surprised because Rachel is at the top of Clayton’s list and she told him she’s falling hard for him.)

Things are getting real

After the group date, Clayton found a note under his hotel room door asking him to meet them at the clock tower.

Clayton was adorably nervous, but he didn’t need to be because it was just Susie who had planned a late-night rendevous.

He was so relieved to see her that when she admitted that she was falling in love with him it was just icing on the cake.

Susie is by far one of the most likable women left on the season and, as evidenced by the fact that producers let “her” plan this side date, she won’t be going anywhere any time soon.

Clayton is a dummy dum dum

Sarah got the last date of the week in Hvar which makes it her second one-on-one date of the season. If she didn’t have a target on her back for being the youngest (23) then she certainly does for getting one of the coveted dates when other women haven’t had one at all. 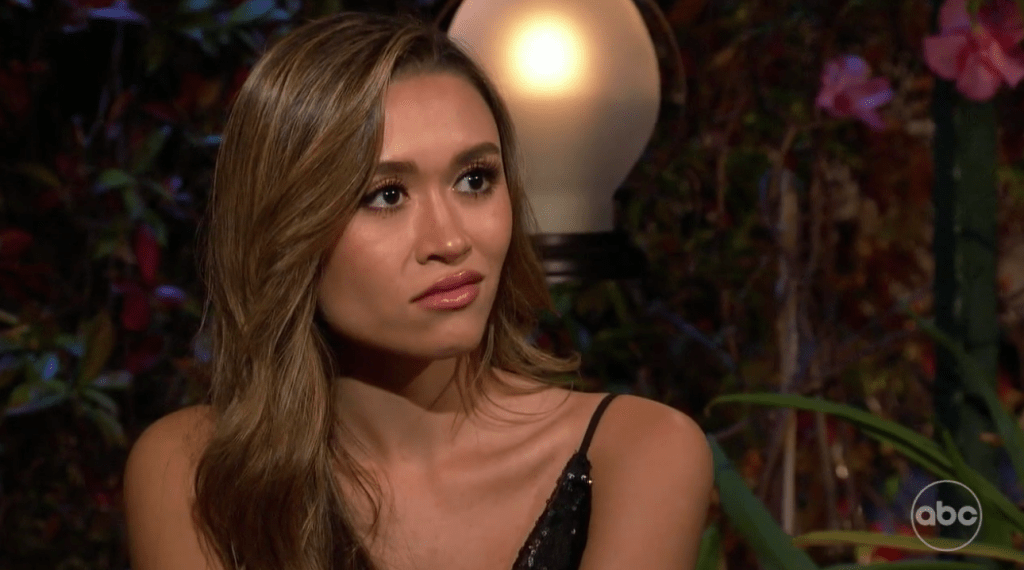 Because Clayton is a complete idiot he took everything that Mara had told him about Sarah and presented it to her as if it were fact.

For the life of me I can’t figure out why this man keeps giving this much credit to information he gets from women he a)hardly knows and b) barely respects.

I get needing advice in a silo, but damn.

Sarah cried a lot and reassured him of her good intentions. He believed her because he’s the most easily swayed man on the planet, and he gave her the rose.

But not before thoroughly pissing her off and setting her on a rampage of revenge on Mara to be continued next week.

How is he this terrible at this?

I feel like the spoilery trailer from the beginning of the season got a bit outdated now that we’ve seen the scene of Sarah crying. I honestly have no idea how this season is going to end, but I can believe that they’ve managed to squeeze at least two more villains out of the group. Who are your final three? I’m leaning Rachel, Susie and Gabby.

The Cool Table Has a Podcast Now!@thecool_table
1.0K Following 997 Followers
RT @bethorne: Yes I LOVED it and talked about it a lot on @thecool_table Tiktok @fozmeadows @CarolinePerny @torbooks
10 hours ago
1
#TheBachelorette Recap: Big Decisions in Amsterdam https://t.co/8WwJtEn2jq
21 hours ago
1 2
RT @BlessAmysHeart: Outlander fans know. That’s where Jocasta kept the French gold.
2 days ago
1
Things Keep Getting Worse for Rachel and Gabby on #TheBachelorette https://t.co/o0rYpGvgci
1 week ago
1 2
@jamiesrule @aliciafromashes @BeaDeeH Camera make up up from telephoto lens /= what it will look like on screen. I… https://t.co/MLwcmdpHht
2 weeks ago
3
Archives
Entertainment, The Bachelor, TV

Even the Drama on The Bachelor is Bigger in Texas