What do Ashley Iaconetti, Jared Haibon, a WWE Hall of Famer, a UFC fighter, and Wells Adams have in common?

They all tested negative for Covid-19 and are chasing clout on Tayshia’s season of The Bachelorette this week.

Get that sponsored ad money, honey.

Previously, Tayshia saved the season by bringing back all of the usual shenanigans we have come to expect and love. Shirtless men in a pool? Check. Gorgeous Bachelorette who does not discuss therapy in every conversation? Check. Chris Harrison working overtime? Check and Check.

Now it’s time for her to bring the drama. Give the people what we want!

The first group date of the night went to Montel, Ivan, Demar, Ben, Chasen, Ed, Joe, and Bennett who competed in the “Grown Man Challenge.” They had to complete a number of tasks such as a math quiz, playing tug-of-war, and making breakfast-in-bed in the quest of the title of Grown-Ass Man. More importantly, production must have finally stopped ignoring Ashley Iaconetti’s texts because she and her husband, Jared Haibon, hosted the date.

At one point Ashley I. said, “ah-choo” and then sneezed without a mask which triggered me in a way I was not expecting. Classic. 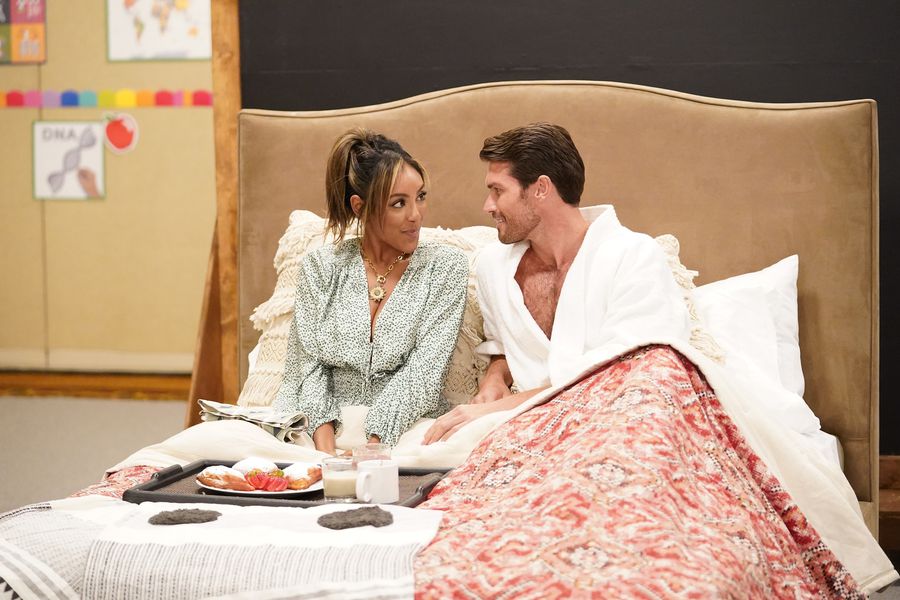 In the end, despite being completely incapable of solving a third-grade level word problem, Harvard grad Bennett was crowned Grown-Ass Man. None of the other men were happy with this turn of events; but, in Tayshia’s own words, “Bennett is bougie,” and if there is anything American history has taught us it is that a rich, well-educated white man never loses.

The worst scoring man, Ed, was given the title of “Man Baby” and a baby doll named Carlos to carry around.

Later that night at the after-party, Tayshia got busy developing a solid crush on Army veteran Ben and getting force-fed strawberries while blindfolded by Aeronautical Engineer Ivan.

In other words, she got busy living my best life.

Meanwhile, Carlos’s baby dad, Ed, and Bougie Bennett called surfer Chasen out for being thirsty AF. Basically, they think he’s a dick who wears “shmedium” shirts and Chasen thinks Ed has chicken legs. Tayshia heard all about it from Ed because they’ve been locked in a hotel for weeks and there’s literally nothing else to talk about.

In the end, Aeronautical Engineer Ivan with the blindfold got the date rose.

Tayshia showed up looking like a super hot Barbie doll for the Rose Ceremony. I’m not saying it’s a competition (yes it is), but dare I say she’s the prettiest Bachelorette…ever? 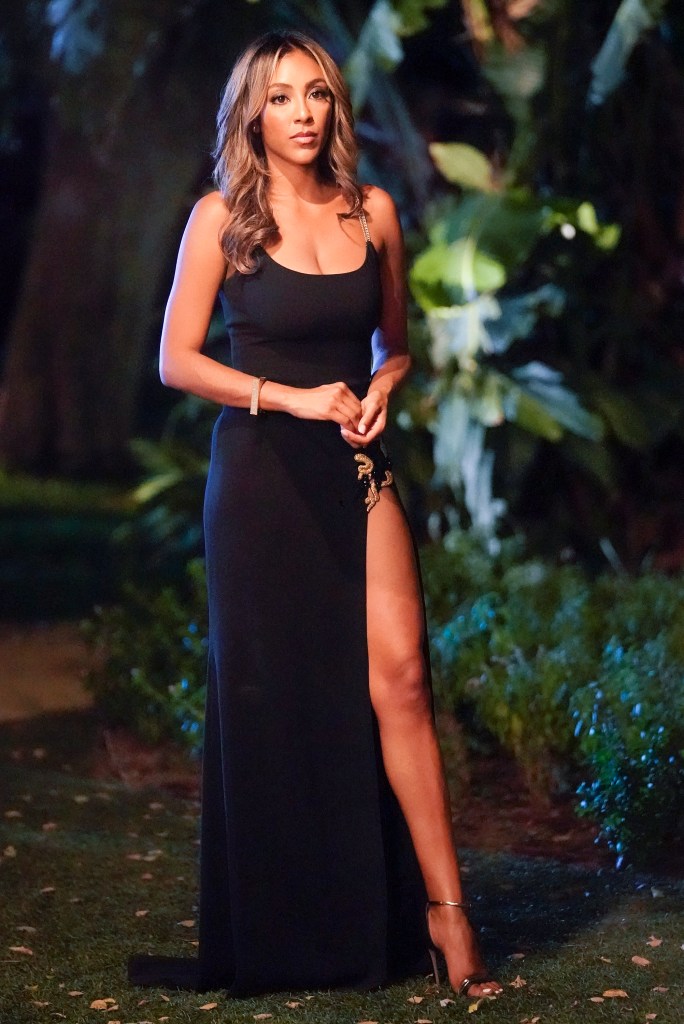 The night progressed in the usual manner. You know, with flirting, arguing, and Tayshia kissing multiple men despite the existence of a virus that spreads through aerosol droplets.

Ed and Chasen really took the man-baby thing to heart because they continued their fight throughout the evening. I’ve been locked in my house with three children since March. Make the dumb arguments stop. Please, I’m begging you.

In the end, Montel, Jay, and Peter were sent home. (I have no idea who they are either, it’s fine.)

Let’s Fight it Out

I don’t know where Tayshia gets her stamina, but the next day it was time for yet another group date. Make it stop.

This time, Eazy, Brendan, Joe, Jordan, Spencer, Ben, Ed, and Chasen would be competing in a wrestling competition. Yes, they put Ed and Chasen together on a date that involves violence. The love I have for the Bachelor production team knows no bounds.

Four-time Women’s Champion and WWE Hall of Famer Amy Dumas and undefeated UFC fighter Tatiana Suarez started the date by coaching the men through some wrestling moves. Then they stripped down and got covered in oil with a giant paintbrush by Tayshia. It turns out that they’re going to fight each other in a ring surrounded by a chain-link fence that the other men were shaking like inmates in a prison yard.

I miss watching them travel to Europe so much right now.

When I say wrestling tournament I mean they took turns throwing each other at full force against the ground while Chris Harrison and Wells Adams made fun of them.

The takeaways are that Anesthesiologist Joe is a gem, Ed faked a shoulder injury to get out of fighting despite Chris Harrison describing him as, “built like a brick outhouse,” and Chasen won while repeatedly calling himself “wolverine” while crossing his forearms.

It was worse than it sounds.

The real winner was Wells Adams who was on the date to provide color commentary. When he exclaimed, “He just nailed him like it’s a fantasy suite,” during one of the wrestling matches, my soul left its body. 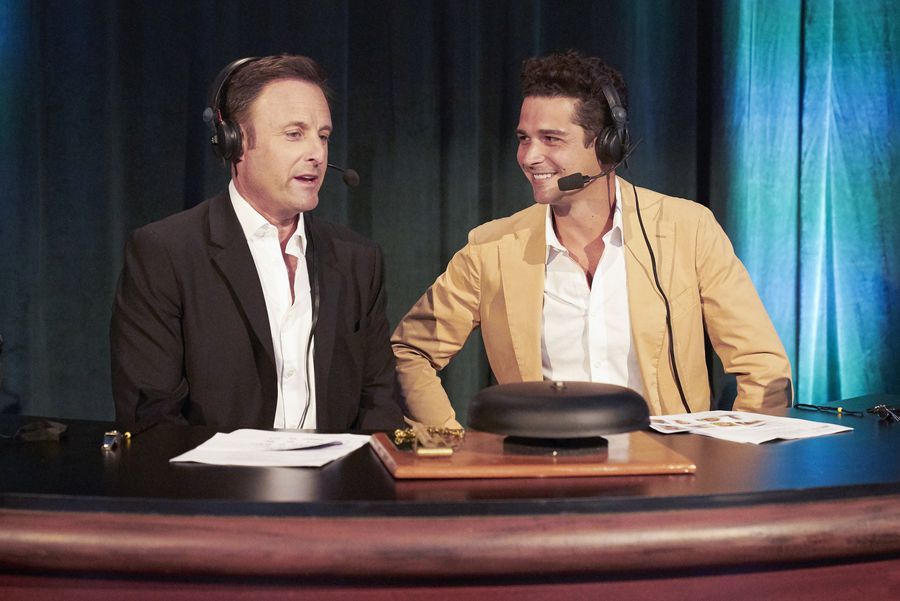 The real fight started when one of the new guys, Noah with a porn-mustache, decided to jump the fence and replace fake-injured Ed in his fight. Fence jumping never works well on this show, Noah. He lost the fight which he competed in while wearing jeans, but Tayshia still invited him to join the after-party.

The other men on the date were furious. They didn’t get painted with oil and humiliated in front of professional wrestlers to share their spoils with a mustached usurper! Too bad, guys because if we know anything about Tayshia and her past relationship with JPJ; we know she loves a schtick. Tayshia ended up spending a portion of her night shaving Noah’s mustache with an electric trimmer and then gave him the group date rose.

And people said Clare was unpredictable. 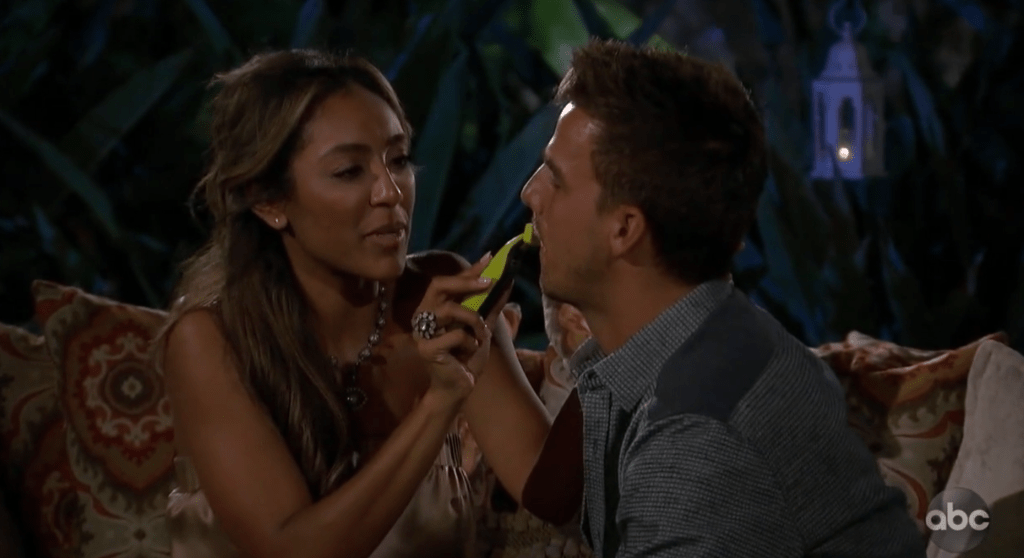 The Bachelorette will be back next week and Tayshia looks pissed in the trailer. Everything is right in the world again.

The Cool Table@thecool_table
955 Following 784 Followers
The Bachelorette Tackled BLM and Fake Orgasms #TheBachelorette https://t.co/1KqzL0fSu0
4 days ago
2 3
It’s easy to hate 2020, but this is the year that gave us: ✅ President Elect Joe Biden & Vice President Elect Kamal… https://t.co/bs2Hvl6sB7
5 days ago
2
This is the week to show thanks, and while 2020 made it damn difficult, it’s not entirely impossible. #Thankful https://t.co/hiMnes8m47
5 days ago
2 7
RT @BlessAmysHeart: The best franchise in AGES. #smelllikehospital
6 days ago
1
If I give you a Chanel necklace and you choke on it, that’s your problem, not mine. #RHSLC @LisaBarlow7 https://t.co/VAxnfk7Ow2
6 days ago
1
Archives
Entertainment, Hulu, Netflix, TV

Tayshia Adams is Here to Save The Bachelorette

Clare Finally Blew Up The Bachelorette

The Bachelorette Had a Dale of a Week

The Bachelorette Premiere Was Not the Drama We Were Promised