By the end of this recap, we’ll all know how Michelle Young’s finale of The Bachelorette ended. But first, she has to introduce Nayte and Brandon to her family, question all of her instincts, destroy at least one man’s heart, and relive her choices on live television the week before Christmas. 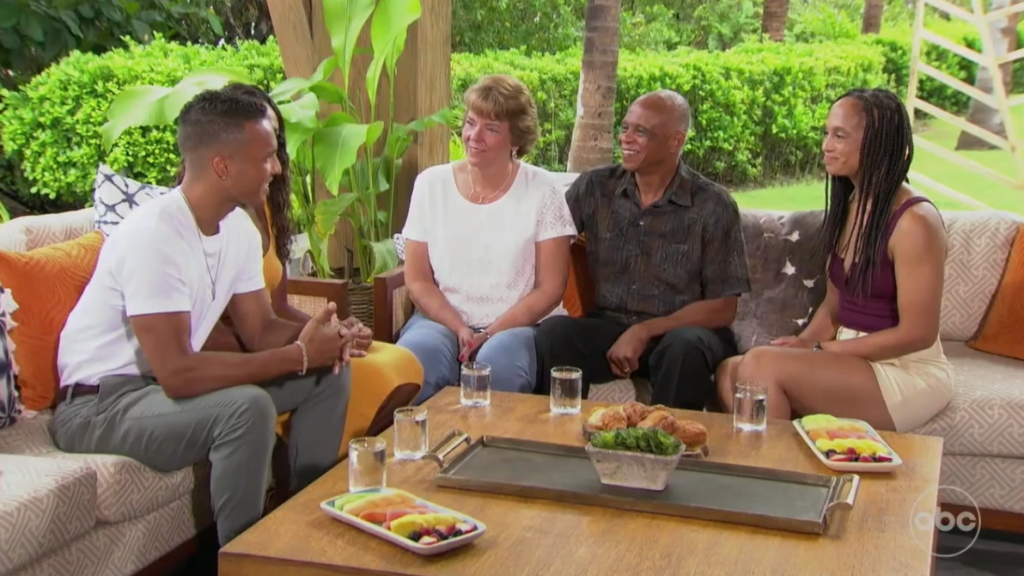 This episode is three hours long and I haven’t wrapped a single gift for Christmas yet, so we’re just going to jump right into this.

Michelle’s precious parents,  Ephraim and LaVonne, are in Mexico with their midwest wholesomeness, and this time they brought her sister Angela along to meet her men. Or in Brandon’s case, to re-meet them since he already got caught breaking and entering into their hot tub on that one date in Minneapolis. 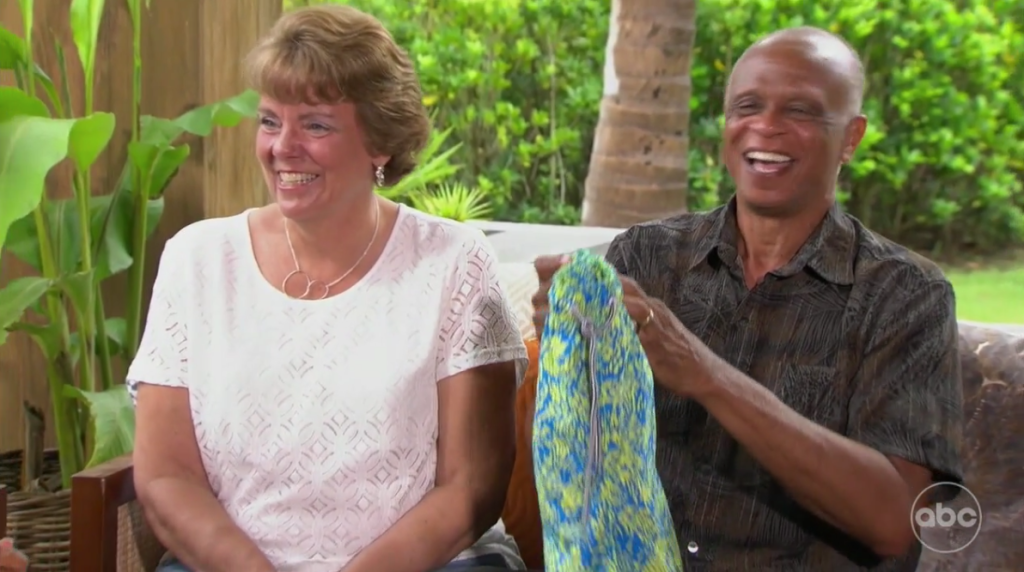 He reassured Ephraim that he wouldn’t be jealous of a successful woman and he told LaVonne that he loves her daughter. And they believed him.

Probably because he’s the most earnest man of all time and he’s head-over-heels in love with Michelle.

She’s going to destroy him, isn’t she?

Nayte’s Lukewarm Introduction to the Fam 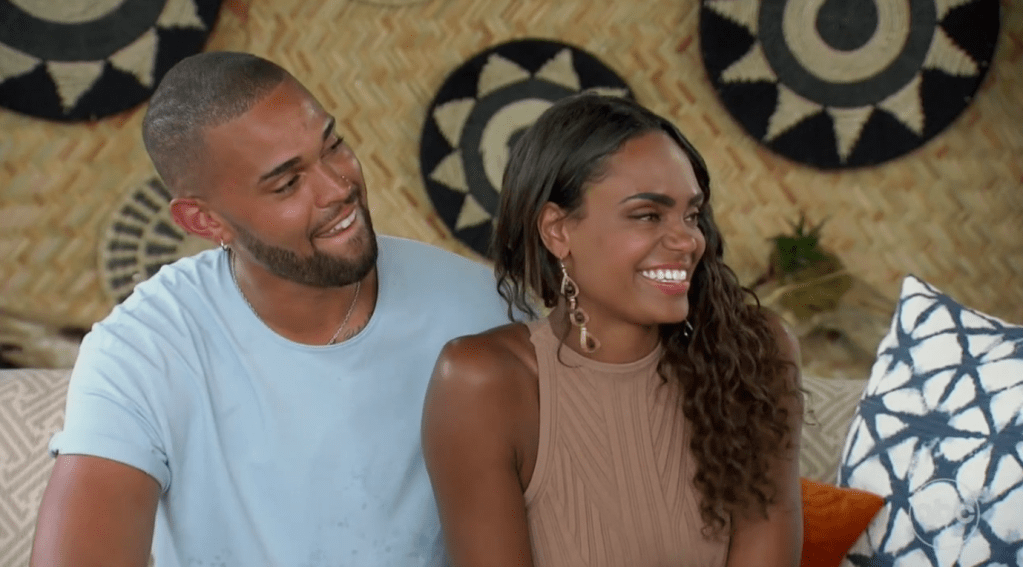 I’m going to give Nayte the benefit of the doubt here and say that he was nervous AF walking in to meet Michelle’s family. There’s no way this dude has a lot of experience meeting parents, and it showed.

Ephraim was all, “Brandon is a warmer person; Nayte had a…different vibe.” 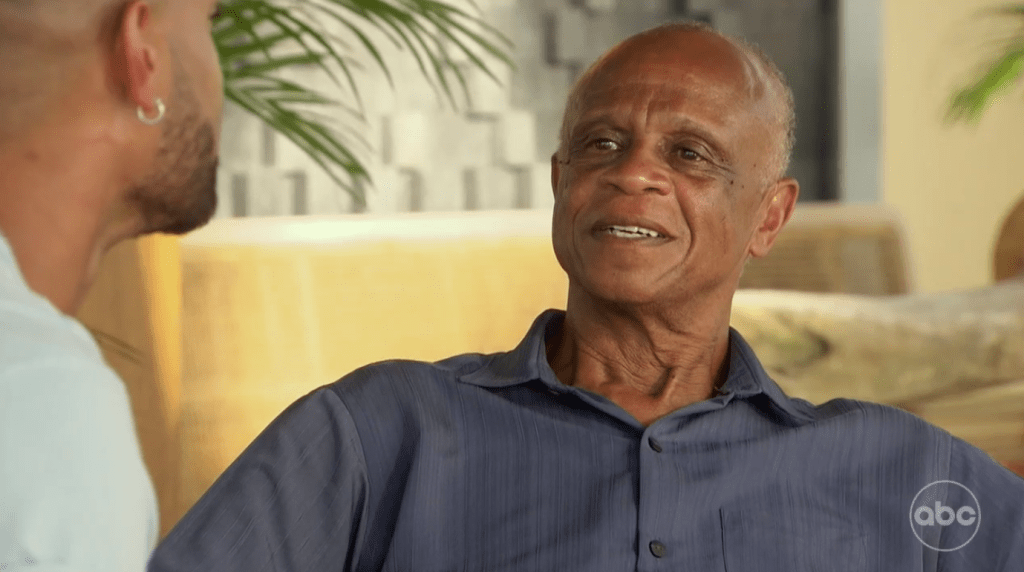 Sister Angela listened to Nayte talk about his grand plans for a life of adventure with a skeptical face and was like, “What about staying still and being content?” To which Nayte said, “I guess I haven’t given that much thought.”

Things were not going well for our boy Nayte. 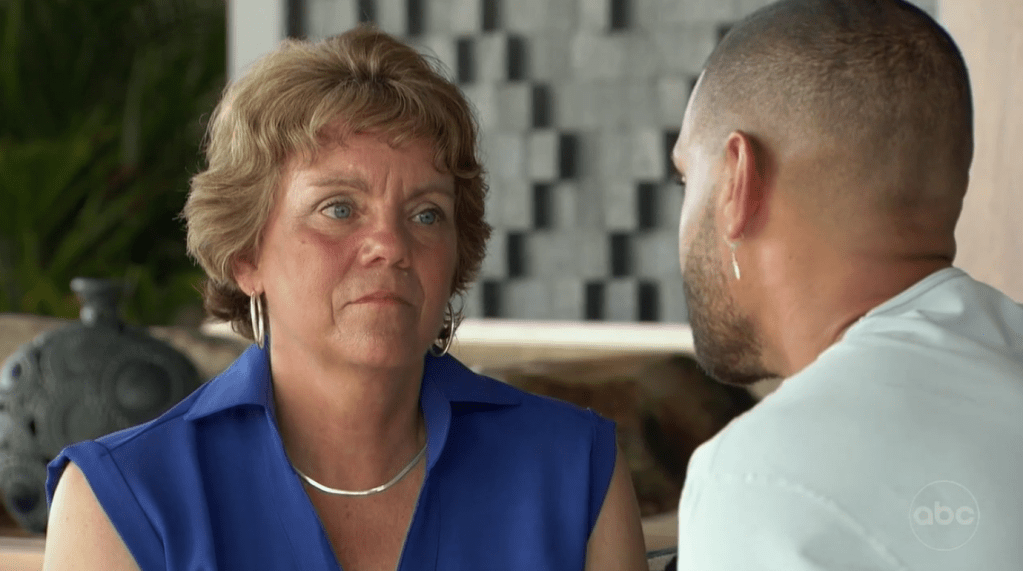 Then mama LaVonne showed us exactly where Michelle gets her direct personality from. In a super intense conversation, she directly told Nayte that she doesn’t think he’s 100% ready for a relationship like this.

Which she followed up with a direct punch to Michelle’s metaphorical gut. By her estimation, Nayte is not ready for an engagement.

Michelle is still mid-existential breakdown thanks to her Mom’s instincts about Nayte, so what better time is there for a jet-skiing date with Brandon? 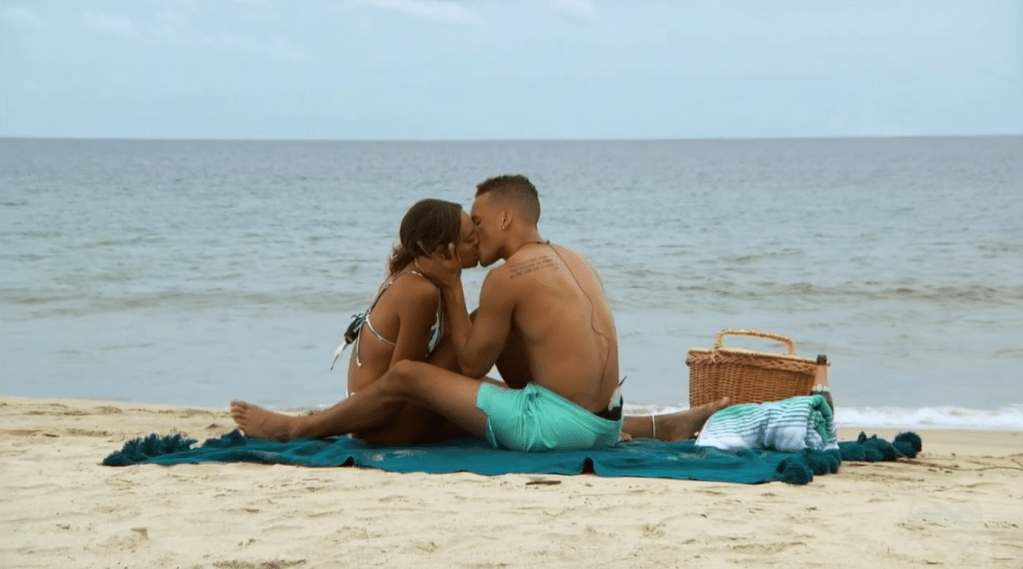 Brandon is emotionally available, forthcoming, trustworthy, makes her feel safe, and is universally adored by her family.

Too bad he’s not a 6’8″ tattooed Canadian who she can fix.

Michelle’s not an idiot.  She knows what the right choice is here.
If she could will herself into loving him, she would. 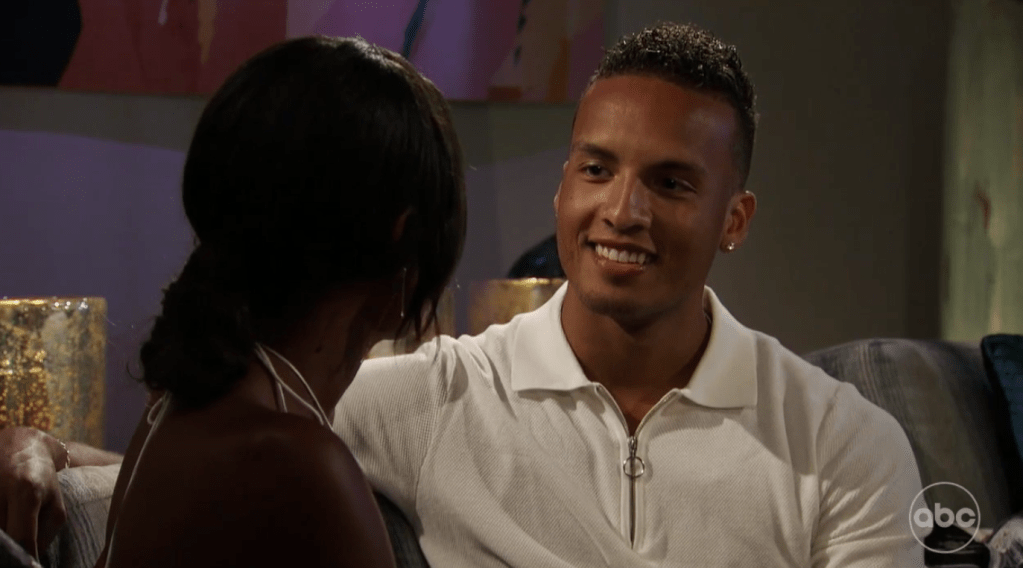 As their night was coming to a close, Michelle told Brandon that she’s “not really falling in love” and his whole face dropped.

Then she followed it up with, “I feel like I already am in love” and his face lit up.

Someone find the Dramamine. I can’t handle this kind of emotional roller coaster. 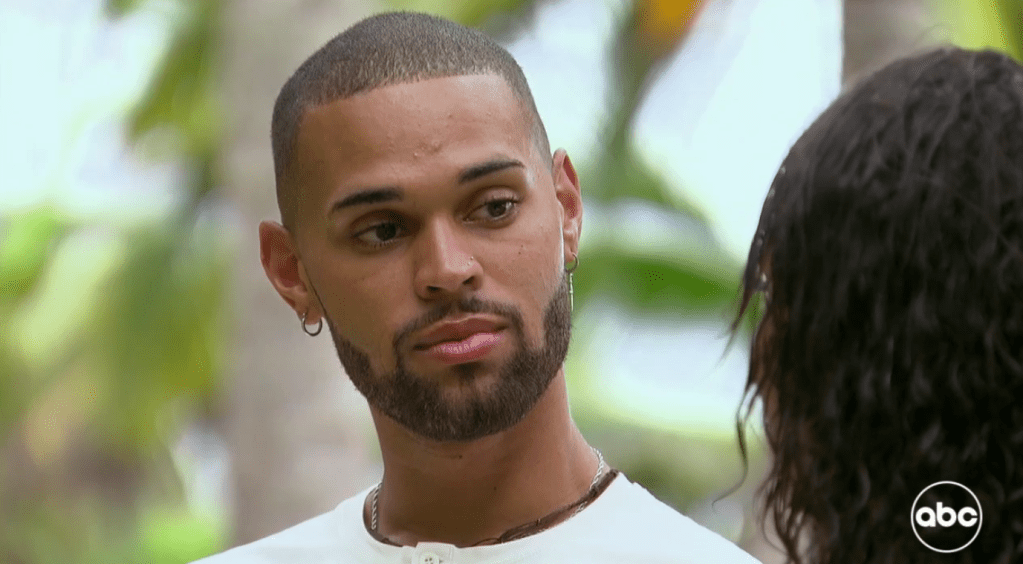 Nayte’s last date with Michelle was with a shaman who told him he has emotional blockages.

But, somehow by the end of the date, Nayte was finally able to tell Michelle that he’s madly in love with her. He wants to spend the rest of his life with her and it’s terrifying but worth it.

Damn, that shaman was good! 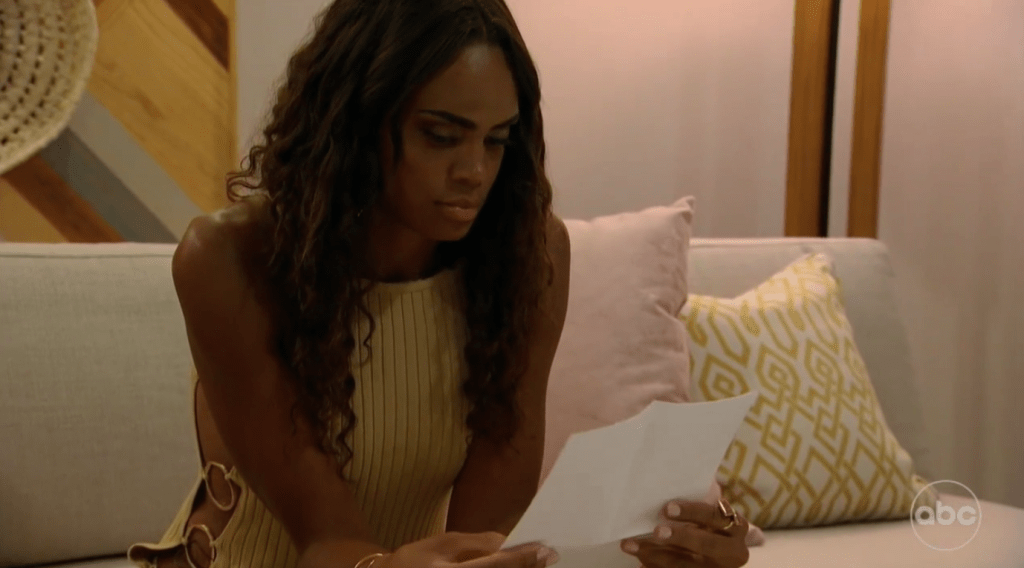 Michelle was riding the high of finally getting the reassurance she wanted from Nayte when she found a letter at her door.

Brandon could teach a masterclass in timing. He nails it everytime.

This time he was writing to tell her that he’ll love her forever and that he hopes she follows her heart because following his led him straight to her.

He’s out here playing chess, but will it work?

Time to Break a Heart

In a surprise to absolutely no one except for Brandon, it did not work.

When I tell you that this was the saddest break-up of all time, I mean it. 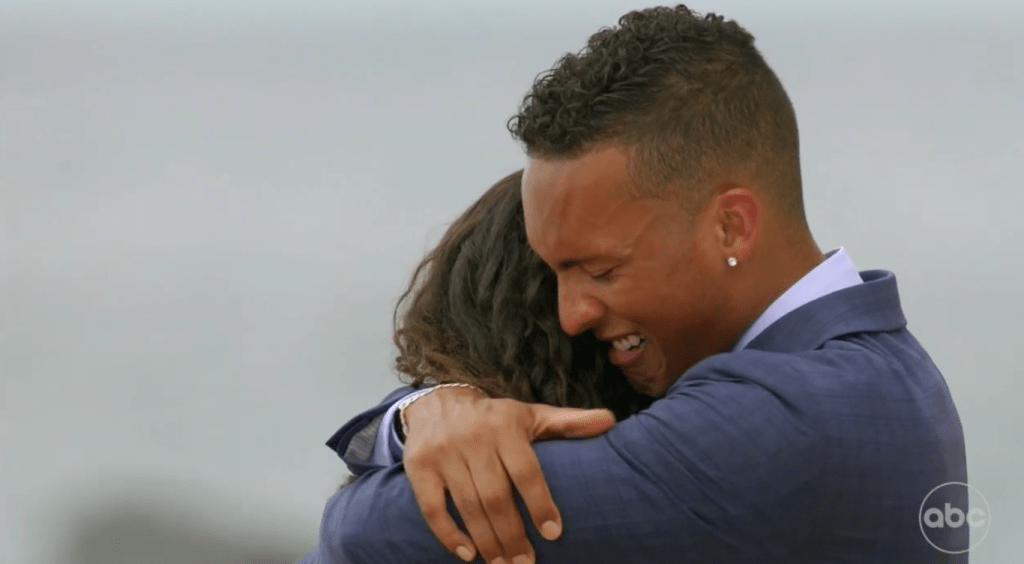 Like, I usually slow play these reveals because it’s the whole point of the show but it feels disrespectful to poor devastated Brandon.

This man was ready to propose. He had their whole life planned out. He was all in.

There were tears, pure devastation, and then I pulled myself together long enough to watch Brandon fall apart too. 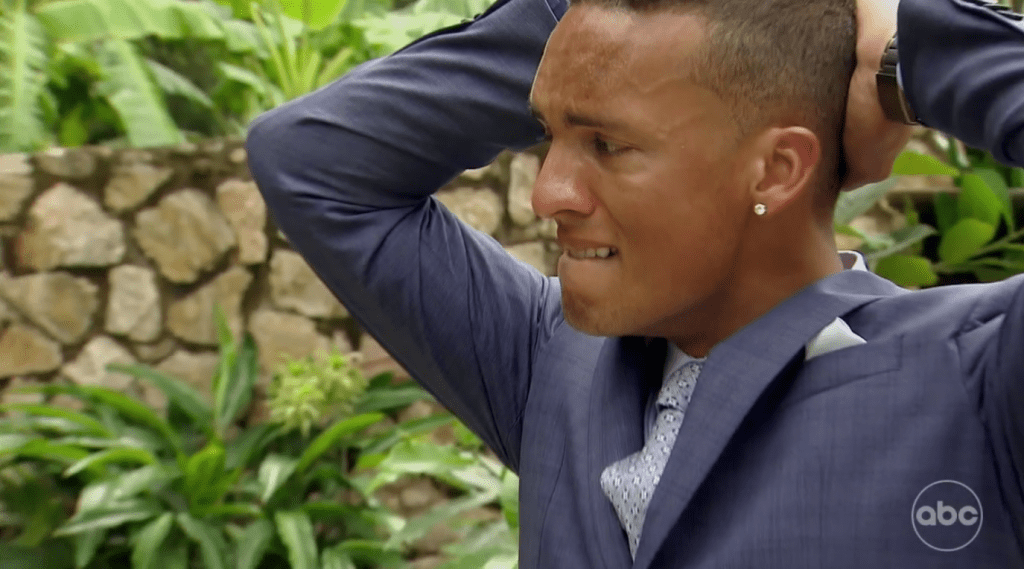 Listen, I barely registered the guy on my screen for half of the season, but I’d die for him now.

Michelle Gets Her Happy Ending

I wasn’t sure I was going to be able to fully recover in time for Nayte to show up so I have no idea how Michelle pulled it off.

But here comes her first impression rose recipient to finally seal the deal. 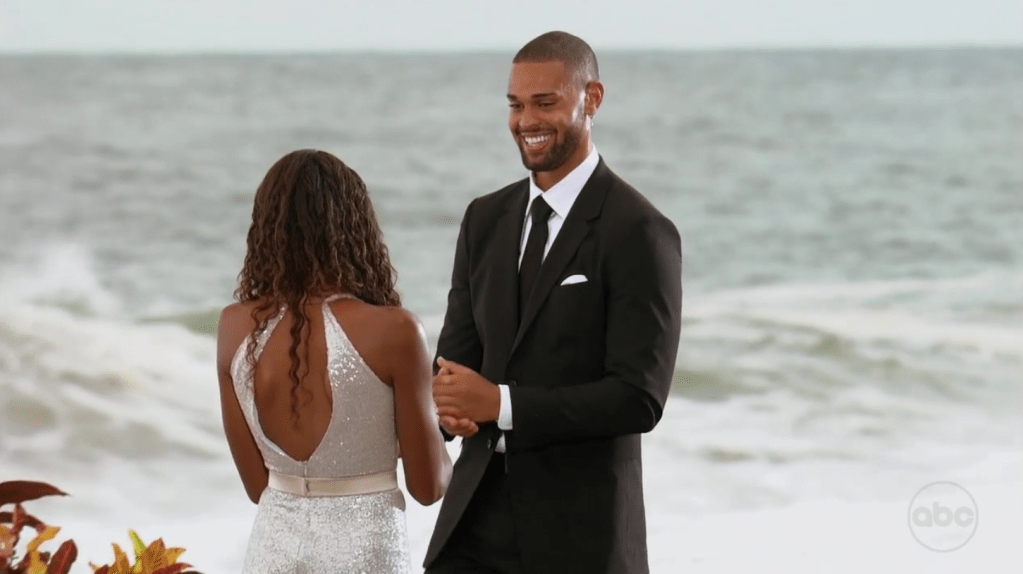 Let’s be honest, it’s always been Nayte since day one. Joe threw me off for a bit and I stand by my love for him, but Michelle only ever had eyes for Nayte.

This was it. He walked up the beach with a huge smile on his face and the music swelled, but Michelle remained stone-faced until the very end.

Like, not even a smirk crossed her face until he was down on one knee. Not even a twinkle in her eye. I couldn’t read her to save my life. Can you imagine being a fifth-grader acting out in her class? I’d be terrified.

We all know, the words coming out of Nayte’s mouth never made sense all season long and they still didn’t really make sense during his final speech. But Michelle continued to be unbothered.

They are both in love and ready to start their lives together.

He proposed with a giant pear-shaped diamond. She said yes and a huge smile finally broke across her face.

And then a mariachi band played while shoeless Tayshia and Kaitlyn ran towards them to celebrate.

Just how every good engagement should end.

By far the best part of the After the Final Rose special was that Twitter bullied ABC into making their live audience put on masks about 30 minutes into filming.

WHY IS NO ONE WEARING A MASK THIS IS A SUPERSPREADER EVENT#TheBachelorette pic.twitter.com/l26YGTawi3

The way I cackled when Kaitlyn came out and explained their choice will stay with me longer than this season.

Anyway, Brandon and Michelle had their chance to talk again. Brandon was, of course, gracious and kind. He’ll be fine, guys. 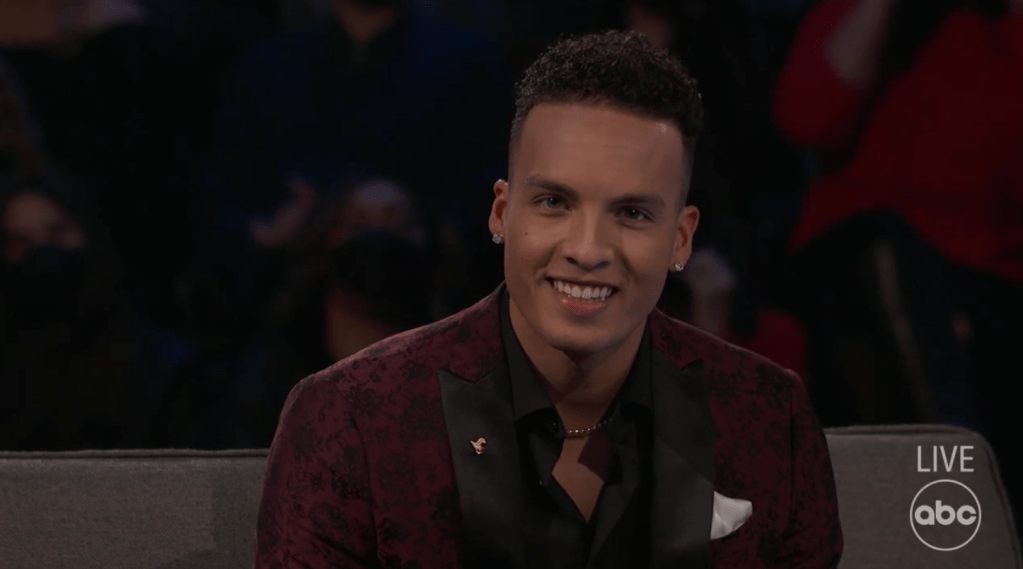 As for Nayte and Michelle, they’re still happily together. Her family loves him. Their moms are besties. He’s moving to Minnesota. Michelle can’t take her eyes off of him. It’s the real deal. 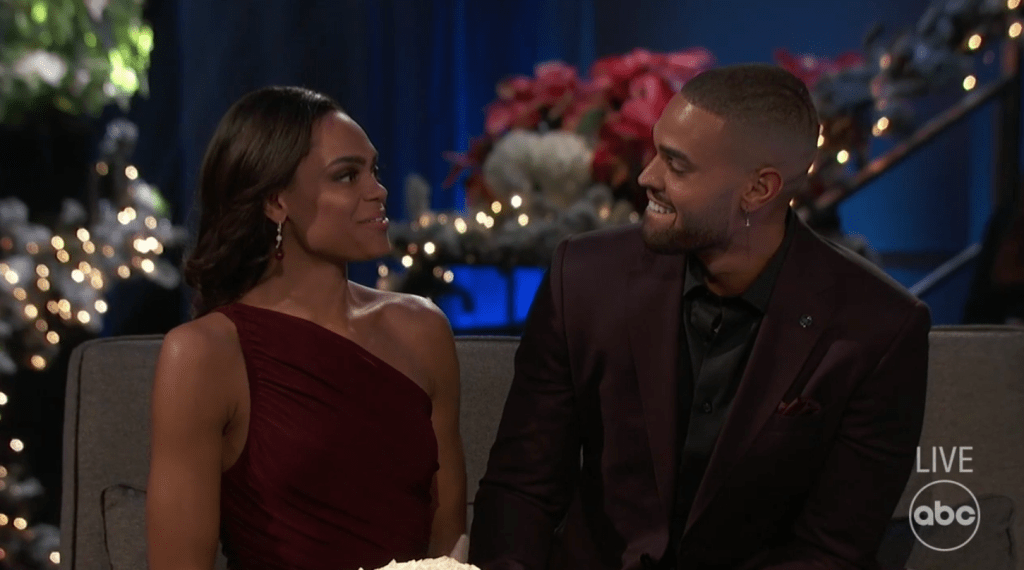 Oh and then ABC gave them $200k to use as a down payment on a house.

Forget Neil Lane, I have a new fantasy.

Was this the most classic season of The Bachelorette in years or what? The pacing was right, there was never cliffhanger ending, villains were dealt with succinctly, and she ended up with the first impression rose. Who can hate that? Don’t worry though, Clayton’s season starts Januar 3rd and it’s gearing up to be a hot, steaming pile of garbage. Just like we ordered.

The Cool Table Has a Podcast Now!@thecool_table
988 Following 939 Followers
Shrimp-gate, Baywatch, Singing in underwear, oh and, Kaitlyn Bristowe made everyone cry. Must be #TheBachelor https://t.co/fD7xk1maFJ
3 days ago
1 3
We are going to do a Where's Waldo but with Amy, as in Where's Amy in #GildedAge Newport. Since she lives there. https://t.co/RKLfEbA4P5
3 days ago
4
RT @RebeccaCokley: "You’re still making that f---ing backwards story about seven dwarfs living in a cave together," says Peter Dinklage. "W…
3 days ago
1.5K
Figuring out why I’m loving @Station11onmax by figuring out why I hated @TheLastDuelFilm https://t.co/NIHG4duULO
3 days ago
RT @BlessAmysHeart: When @bethorne writes the smartest shit.
4 days ago
1
Archives
Entertainment, The Bachelor, TV

Kaitlyn Bristowe Made Everyone Cry on The Bachelor